It was noted at the beginning of the meeting that a few kings are being caught in the lower portion of the river below Bethel.  The Bethel Test Fishery, which is used as an indicator of run strength and will be the major real-time tool used to determine if any management actions are taken, has caught two Chinook so far.  Here are the results to date of the Bethel Test Fishery compared to previous years.

Daniel Esai of Nicolai said that last year the first Chinook was caught on June 7th.  He noted that one year someone caught one as early as May 31; obviously, there is great variation from year to year.  Over ten years ago Sally Hoffman caught a Chinook in the Aniak River while ice fishing in April!

As far as salmon enumeration projects the only weir currently in is the Kwethluk, but it hasn’t caught any yet…which is normal.  The Kwethluk weir actually has to be installed in April, otherwise that water is usually too high this time of year to get it in.  All the other weir projects are currently being installed.

Steve Miller with the Fish & Wildlife Service in Bethel said that they will be collecting tissue samples this summer in and around Bethel and McGrath to assess the extent of the ichthyophonus disease; something that has been fairly common in the Yukon River fish over the years.  So keep your eyes out for pale flesh with nodules or irregular spots or bumps.  If you come across any suspicious fish, call the Bethel FWS office at 543-3151 or Ken Harper in Kenai at 800-822-6550. 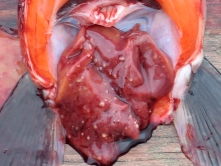 Nodules in liver of Chinook salmon 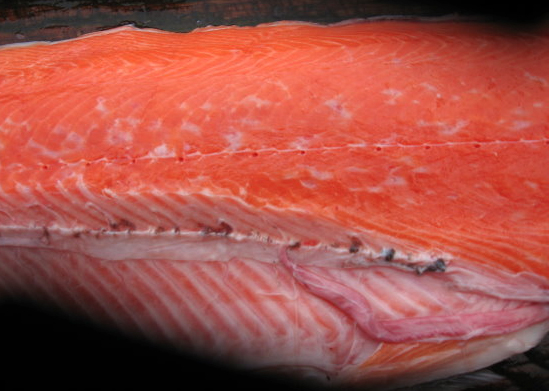 After a week of deliberations the Department and the Fish & Wildlife Service have agreed to use a total in-river escapement of 127,279 as an objective for management purposes going into this season.  That number corresponds to almost 9,000 Chinook escaping into the Kogrukluk River on the upper Holitna.  Unfortunately, by the time anyone knows what the actual escapement on the Kogrukluk, or any weir, is – it’s too late to make any real-time decisions; that’s why fish management is so difficult.

It is possible that in order to make that level of Kuskokwim-wide escapement that everyone in the drainage will have to sacrifice in these times of low returns.  And it is possible that those sacrifices may begin this coming Sunday with what’s called rolling closures which would first be implemented downstream of Bethel and then progress upriver.

The entire river has been divided up into five sections that will have overlapping closure times in order to give a particular group of fish the best chance of making it upriver to the spawning grounds with the least amount of pressure.  Fish run timing was taken into consideration since past studies have shown the swimming speed for a Kuskokwim Chinook averages about 13-14 miles per day.

Section 1 is downstream of Bethel, then Section 2 goes from below Bethel up to Tuluksak.  Section 3 runs from Tuluksak to Chuathbaluk.  Napaimute is in the 4th section which goes from Chuathbaluk to Sleetmute; everything beyond that is the 5th section.

The most downstream section below Bethel, being the first one to be closed, will have a minimum of 24 hours notice.  We in Section 4 will have plenty of notice as to when our closure will begin; it will take effect 5 days after Section 3’s begins.  Keep in mind that when the closure is in place there will be no rod and reel fishing either in the name of subsistence or sport fishing for Chinook salmon.

Depending on how poor the run is, there could be more than one closure period in a particular section; this would likely apply to downriver sections where escapements in the lower tributaries like the Tuluksak and Kwethluk rivers are of great concern.

If you have any questions you can call ADF&G in Bethel at 543- 2433 or E-mail me at dcannonnapaimuteed@earthlink.net