Prior to each meeting members of the Kuskokwim Salmon Management Working Group are provided a packet of material with various information or data that is used by the managers to make recommendations and/or set regulations that affect not only subsistence users, but also commercial fishermen as well as eagles, bears and other animals that are dependent on the returning salmon.

Basically, that information is used to assess whether or not there are enough fish available to have a commercial fishery, and if so how and when the openings should occur.  The data are also used to determine how many fish will be left to spawn after the subsistence and commercial fishers remove their piece of the pie.  The fish left to spawn are what’s referred to as escapement.  Since it only stands to reason that today’s escapement determines how many will come back in the future, it’s important to get all those numbers right!

In this post we’ll look at one information variable that can be quite variable – run timing.  Everyone knows that from year to year there is substantial variation between when the first Chinook shows up and when the rest, or bulk, of the run passes by.  As always, there are always a few stragglers that mosey on by long after the others have spawned and died…kind of like the Red Lantern musher for the K300.  One year in mid September I saw a male Chinook in a backwater under a thin coating of ice on the Kisaralik River; I’m sure he was the Red Lantern that year.

The Bethel Test Fishery is one tool used to collect data, but it’s really used as an index to indicate the strength and timing of the run; if it’s catching a good number of Chinook, chum, sockeye pink and silvers then there should be quite a few passing by Bethel.

The graph below is one example of how biologists show run timing. 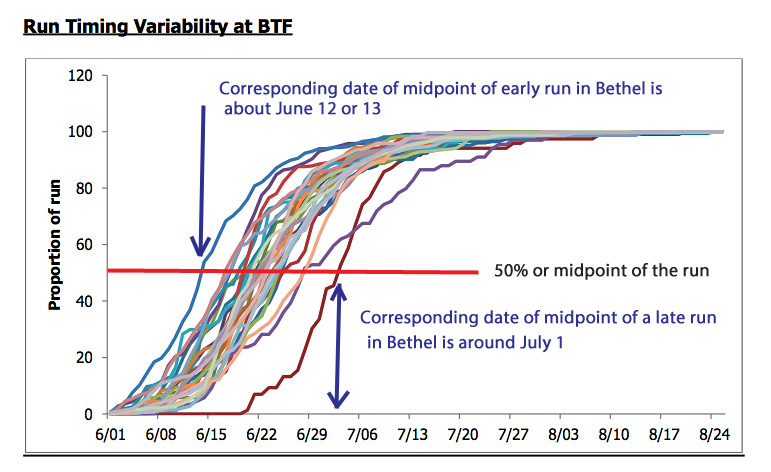 All the colored squiggly lines starting on the left and moving up and to the right represent a different year of returns for Chinook passing by Bethel – the numbers are derived from the Bethel Test Fishery.  The vertical (up and down) axis represents the percentage or proportion of fish of the total run for a particular corresponding date on the horizontal (left to right) axis (6/1, 6/2, 6/3, etc.).  June 1 is the first date on this graph because that’s when the test fishery begins drifting each year.

The blue squiggly line on the far left is considered an early, or in this case the earliest, run of all the years used to construct the graph. Lets follow the line from left to right and see what it’s telling us.  For that particular year, if you were fishing near Bethel other than from June 8th through June 15 you might have had to spend much more time getting what you needed when you did fish.  Those dates correspond to several days before and after the date that half of all the Chinook passed Bethel.  It’s basically the period when the bulk of the Chinook are both above and below Bethel and it is shown by the thick red horizontal line between the numbers 40 and 60.

To find the midpoint for any year, find where the colored line that corresponds with the year you’re interested in crosses the thick red line and drop a straight line down to the horizontal axis…that’s the date you’re looking for.

Now lets look at a different year, a very different year.  The brown line shows the latest run timing that the test fishery has ever documented.  Excluding weather conditions for drying and the desire to catch the early, bright fish – a good time to catch Chinook would have been between June 25 and July 4th; that’sbecause that’s the period that corresponds when a bulk of the fish are in the vicinity of Bethel.  During this year when the run was late, if you’d been fishing from June 8 through June 15 – when it was statistically the best time to be out in the blue year – you probably wouldn’t have caught much if anything!

Why do I say that?

If you look at the dates from June 1 through June 19 the flat brown line is indicating that no fish had been caught yet in the test fishery (although we know that some fish are in the river).  It was only beginning around June 20 when the line starts rising upwards that there were good numbers of fish being caught in the test fishery.

Obviously fishermen pass the word around as to when the fish are running, so they naturally adjust their fishing habits.  But this data can be used to let upriver fishermen know what to expect for when, and how many fish are heading their way.  Of course even if you were to fish outside these timeframes, it can always be good if you get lucky and happen to catch a large pulse of fish moving through right at that time; sometimes, the early bird gets the worm…or in this case the fish!

Keep in mind that the blue and brown lines discussed here are the extreme cases.  That’s why the other lines are bunched together with the majority of them closer to the average, which is pretty much in the middle of all that mess.  So if you were to draw a line through the middle of all those others following the same general pattern – that would show what the overall average run timing for Chinook in the Kuskokwim River has been over the years.