During the Kuskokwim Salmon Management Working Group’s meeting on June 15th the Department of Fish & Game, along with the U.S. Fish & Wildlife Service, announced that they will extend the fishing closures another 5 days to help conserve the Chinook salmon this summer.

The run, although it appears to be late, also seems to be very weak; in fact the lowest on record…and that is after two successive poor years, when 2010 was the poorest on record.

The Working Group had proposed a 5-day opening to allow for some subsistence harvest since this is generally the best drying time for salmon.  However, the agencies noted that providing for adequate escapement is the highest priority, a management objective that AVCP, ONC and the Working Group previously supported.  The Department noted that there was no indication that any harvestable surplus what-so-ever was available.

The Working Group also proposed a gear restriction of 6” mesh or smaller during an opening, but the Department reiterated from previous meetings that this early in the season 6” gillnets actually harvest more Chinook.  The Department and Fish & Wildlife Service feel that by enacting another 5-day extension on the already existing 7-day closure that would ultimately allow for more chum and sockeye salmon to be harvested in the near future.

The meeting ended with the Department of Fish & Game immediately implementing the extra 5-day subsistence closure.

Most Working Group members were disappointed, and in fact, expressed displeasure that there was no window of opportunity for subsistence harvest of Chinook salmon.

The agencies that manage the fisheries must go with the best available information they have, which granted isn’t perfect.  I’m sure most people would agree, if anyone is to err, it’s best to do it on the side of the fish.  As Fritz Charles said at the previous Working Group meeting,  “I want my grandchild’s grandchildren to fish for Chinook 40 years from now.”

According to the Bethel Test Fishery this is how dire the Chinook run is: 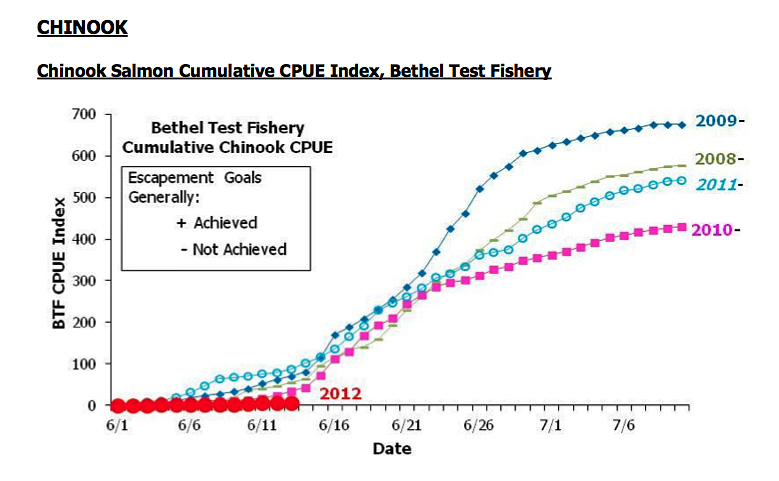 The graph’s numbers on the left correspond to how many fish have been caught so far or by a particular date – so by this time the past few years, even the low run of 2010 had many more fish than caught this year.  Obviously this can indicate a late run, but more than likely it’s showing a weak run.  In fact, most years exhibiting a late run tended to be on the weaker side.  As you can see, this year we’re pretty much flat-lined at a very low number as far as the Catch Per Unit Effort.

Here’s a different way of showing the Bethel Test Fish numbers over the last 9 years: 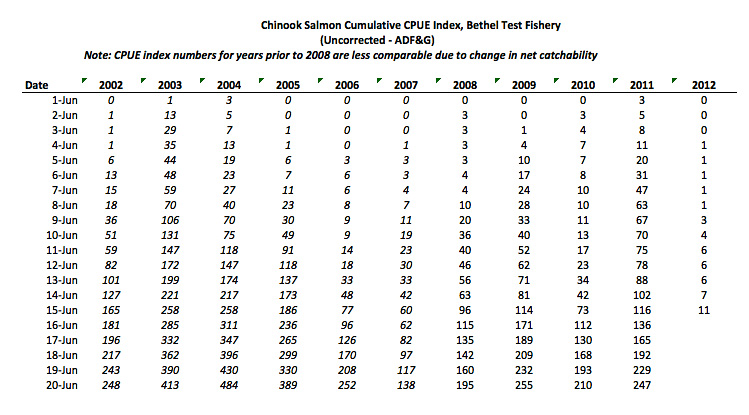 Once again here are the escapement numbers the past five years.

Keep in mind that the 5-day restriction – or any for that matter – can be rescinded if the assessment tools determine that the run is adequate.

A VERY IMPORTANT MESSAGE IS THAT over the past few months both agencies, as well as the Working Group and other local organizations, have publically promoted the use of other more abundant fish species (e.g., chums & sockeye) as a conservation measure.

However, during ONC’s in-season harvest surveys at least one family reportedly stopped fishing recently because they, “were catching too many sheefish”.  But isn’t that the type of sacrifice that is needed if we want to conserve the Chinook?

One topic of discussion in which great frustration was expressed was that of sport fishing in the tributaries – specifically those that weren’t closed going into the season.  The tributaries closed several months ago through an Emergency Order include  the George, Aniak, Tuluksak, Kisaralik, Kasigluk and Kwethluk rivers; the three not closed are Holokuk, Oskwalik, and Holitna.

John Chythlook (ADF&G Sport Fish) noted that the Department released an Emergency Order this past Wednesday (13th) that reduced the sport fish limit to one Chinook in those tributaries still open.  The EO, however, also closed the mainstem of the Kuskokwim to all sport fishing for Chinook salmon.  This would include the area right in front of Aniak along the dike as well as the popular confluences of the Owhut and Holokuk rivers.

Mark Leary and others pointed out that sport fishers could still fish the Holokuk and Oskwalik rivers while subsistence fishers were unable to fish.  John Chythlook stated that if the numbers show that the run hasn’t improved by the time sport fishing gears up it is likely that they will likely close all tributaries to sport fishing for Chinook salmon.