There were several questions brought up during the two-hour KYUK Call-In show the day after the Kuskokwim Salmon Management Working Group meeting where the Alaska Department of Fish & Game and Fish & Wildlife Service continued the closure periods against the wishes of the Working Group.

Over the past few weeks, and actually almost every year, people have questioned how good the Bethel Test Fishery reflects the actual abundance of salmon that’s in the river.  Well, it’s only natural to question such a tool when major management decisions – decisions that affect everyone on the river – are based off the results.

Some have said that this time of year the white-nosed kings are traveling too deep for the test fishery to catch…and that may be true.  Others say that the high water affects the results – and that is true.  And there are other variables that come into play depending on the circumstances.

But earlier this year the Department showed how well over time that tool compared to the eventual real escapement numbers observed at the weirs – particularly the Kogrukluk weir 100 miles up the Holitna River.

Unfortunately, the Kuskokwim managers have very few real-time tools, and this for now is the best one; the ONC In-Season Harvest Surveys are conducted to help validate the Bethel Test Fishery.  But keep in mind that the BTF is only an index; in other words if there are few fish in the river the catch per unit effort, or CPUE, should be low and when the numbers are high the results should reflect that too.  Hopefully it does a reasonable  job for everything in between.

Very few, if any, management tools are perfect, and a test fishery does have it’s limitations.  One limitation, however, is not that it doesn’t catch as many fish as possible.  Because many people think it should, they often ask why fish where it does and why the same time of day – in regards to the tide.  The reason being that any defensible tool must be repeatable so that it can be compared to previous days, weeks and years.

One caller had concerns for the soon-to-be implemented 6″ mesh restriction, stating that too many fish would fall out of the nets and die, being no good to anyone.  Travis Elison, the ADF&G Acting Area Manager, noted that fall-out occurs no matter what size net is used – even the larger nets.  Travis said that many fish make it to the weirs with net marks, which shows that many fall-outs continue on and are able to spawn; that’s why the Department believes that restricting mesh size is a viable conservation measure.

Below are several pictures taken from various weirs showing salmon with net marks that have made it back to spawn. 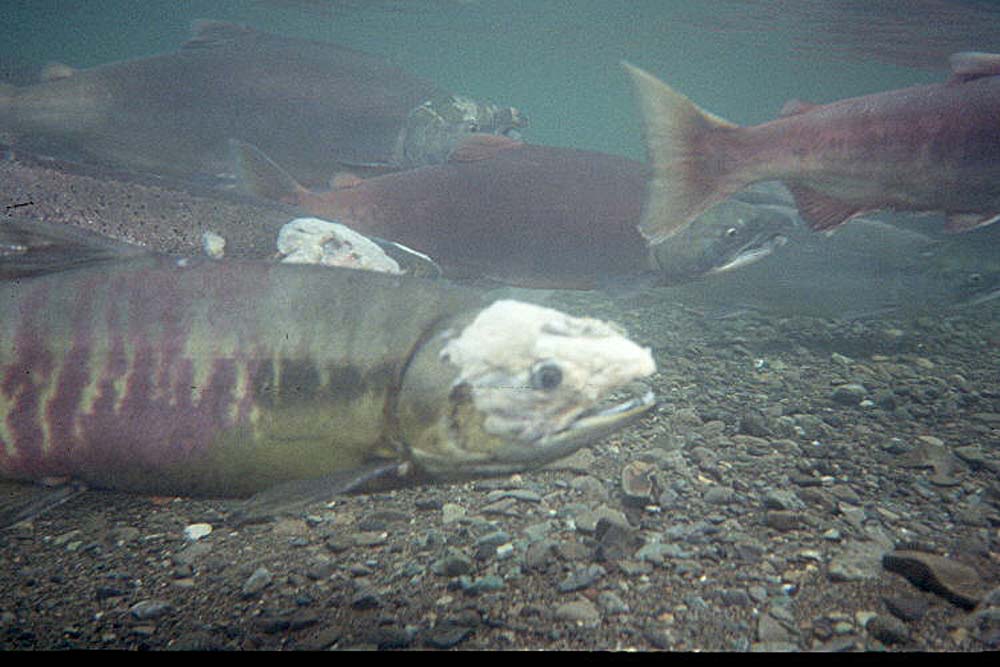 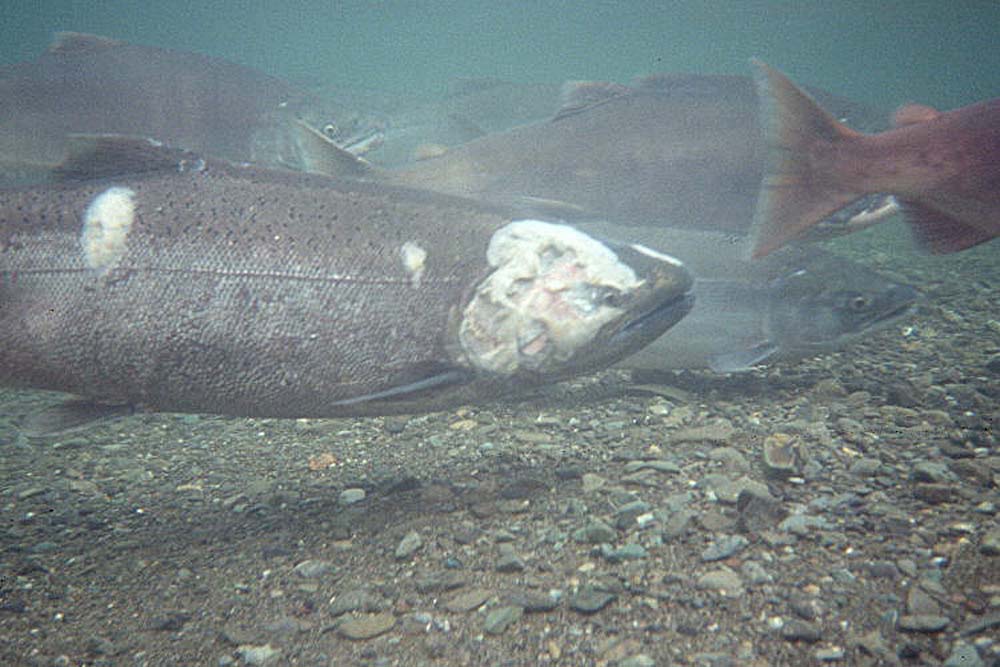 Chinook salmon showing the results of earlier entanglement in a net 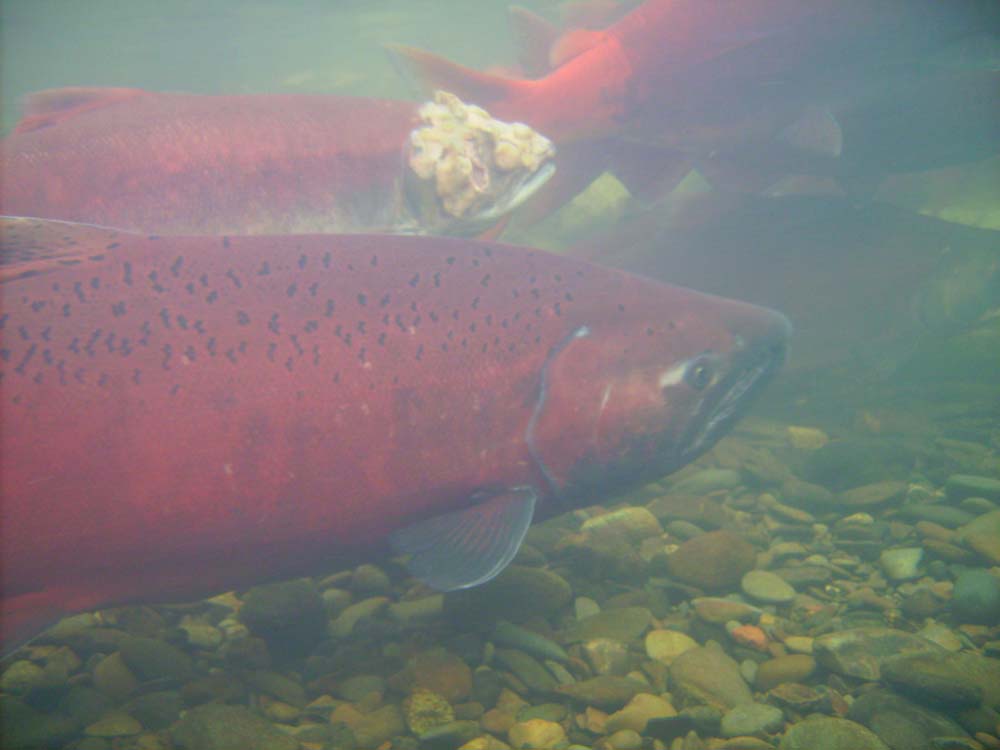 Lastly was the topic of bycatch and the implications with the Chinook returns to the Kuskokwim.  Many people are under the belief that over 100,000 Chinook salmon are killed and wasted each year from the Bering Sea pollock fishery.  Since May 15 of this year, 7,772 Chinook salmon have been caught (all of which are not heading to the Kuskokwim or Yukon rivers).  Here’s information provided by the Yukon River Drainage Fisheries Association:

I think the main point to make is that of that 7,772, not all are Kuskokwim fish.  Unfortunately we still don’t have good estimates of just how many of those fish are Kuskokwim-bound.  Historical sampling for genetics has been inadequate.  In 2010, after improvements in genetics sampling, approximately 40% of the bycatch is estimated to be from coastal Western Alaska.  2011 estimates are not yet available, and we will need several years of estimates to fully understand how much the portion of the bycatch from coastal Western Alaska will vary year to year.  We also don’t know what proportion of coastal Western Alaskan stocks are Kuskokwim stocks, but this group includes all Chinook salmon stocks from Bristol Bay, Kuskokwim, the Yukon below the Tanana River, and Norton Sound.   At this point, all we can really say is that the bycatch number is made up of many different stocks, and only some of those fish would have gone to the Kuskokwim.

So keep in mind that there has been only one year when the bycatch has exceeded 100,000 Chinook salmon; other years, however, have been as high as 80,000 with most being under 60,000.  It is a shame to waste any fish, and in years with low returns like this that waste is extremely heinous.  But in the big scheme of things the bycatch is a relatively small player in the amount of fish we see  – or don’t see – returning to our rivers to catch for subsistence or to spawn.

We’ll discuss the ocean conditions that are a major player in regards to what we see coming back to the Kuskokwim in a later post.