ADF&G Holds Off With Commercial Opening Until At Least Thursday

During last Saturday’s meeting the Department proposed possibly holding a commercial opening tomorrow (i.e., Tuesday) since there seems to be plenty of chums and sockeye passing through (see the accompanying tables) and we should normally be seeing a decline in the abundance of kings.

Subsistence success was discussed by the Group members, with mixed results.  James Charles reported that people in the lower river have not been able to put up many kings.  Mike Williams noted that people around Akiachak have had decent success, with a mixture of kings, chums and reds.  Mike Thalhauser, with KNA, stated that half the people of Aniak had what they needed while the other half were still fishing.  Further upriver in Crooked Creek, Evelyn Thomas said that the only fish that people around the village have been catching are chums – even very few sockeye have been harvested.

Evelyn made a plea to the F&G that they hold off with any commercial openings until everyone had a chance to put up more fish.

Casie Stockdale with AVCP noted that AVCP was aware that managing the needs of the subsistence fishermen with the commercial fishermen is a tricky balancing act.  She said that AVCP was aware how many people are reliant on the income that commercial fishing generates, and that if there was an opening that the Department do it’s best to minimize the king incidental harvest.

Casie recommended that any incidental king harvest be given to those folks in need, especially villages upriver.

But the Department and the Fish & Wildlife Service, after having already looked at the numbers, felt that there was still a fair amount of king salmon passing through the lower sections of river and that too many would be incidentally harvested – thereby cutting into the escapement numbers.

The data show that weir counts and the Bethel Test Fish Catch-Per-Unit-Effort are showing that this year’s run is still tracking below the previous two years that were the lowest on record.

Here is the table showing the cumulative king catch for the Bethel Test Fishery. 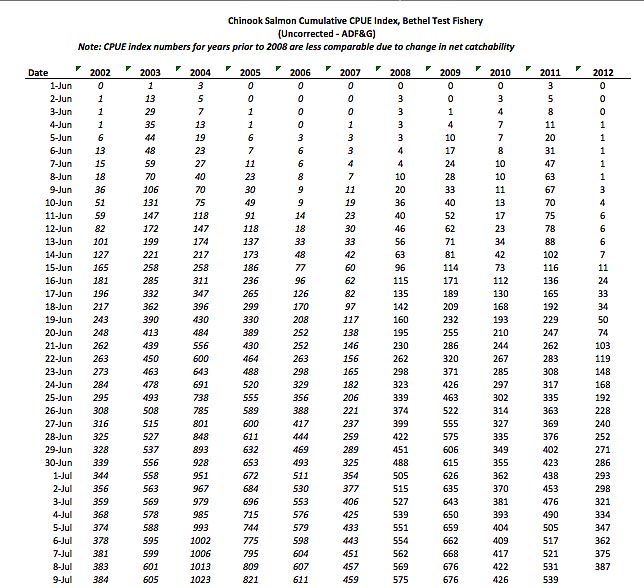 Stewart Curry, representing the processors, concurred with the Department’s decision to hold off commercial fishing for a few days to allow for further escapement and subsistence fishers the opportunity to put up more fish.  He asked what numbers in the BTF would need to be for the Department to consider  holding a commercial opening.  Kevin Schaberg with the Department said that a definite downward trend in the single digits was necessary.

Here is a graph showing the entire season’s daily catch of kings for the BTF; note how the far left gradually picks up but the far right still shows a catch of around 12-14 kings a day.  Under normal conditions for most years this graph will end up being shaped somewhat like a bell – hence it is called a bell curve.  In a few days we should see the right side gradually dropping down to form the other tail of the bell.

In theory here’s what a normal bell curve looks like: 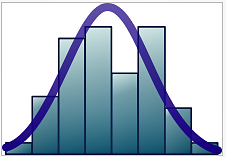 What the Department will be looking for is when the right side begins to closely match the left (i.e., steady decline); that’s when 95% of the kings will have passed by. 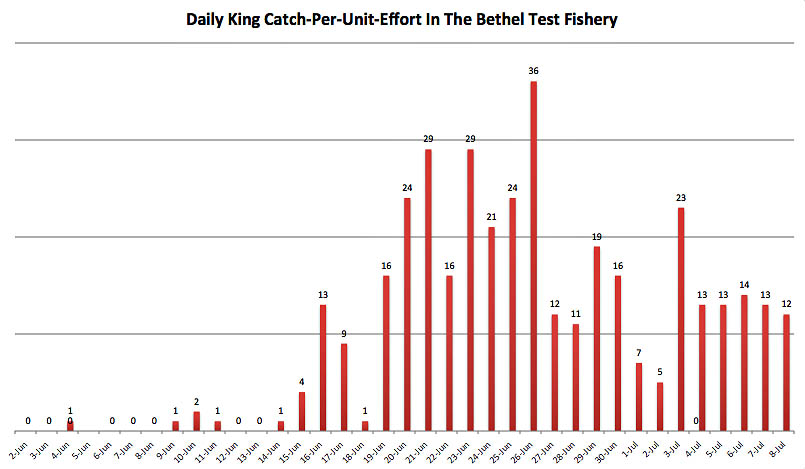 Here are the numbers in table form for the daily CPUE for sockeye and chum: 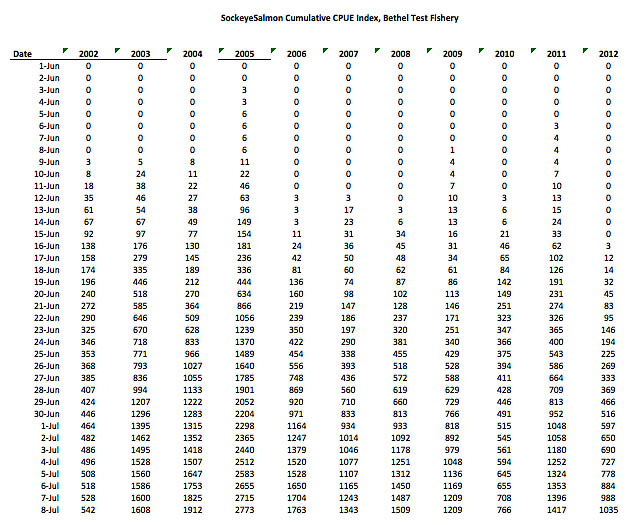 CPUE for sockeye in the Bethel Test Fishery 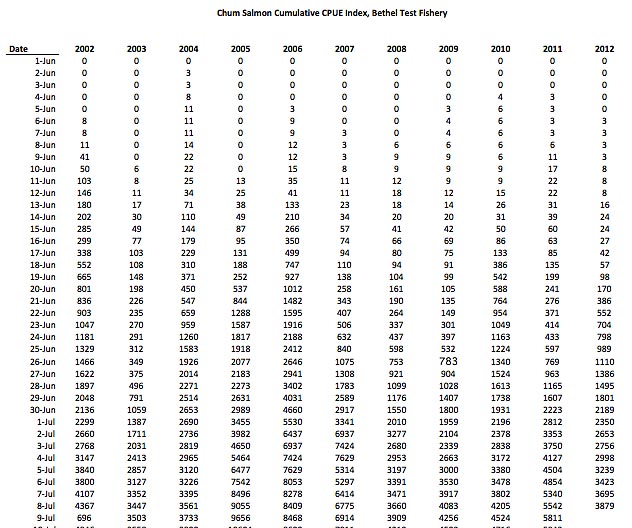 CPUE for chums in the Bethel Test Fishery