Here are the latest happenings on the Donlin Gold Environmental Impact Statement – known forever more as the EIS.  If you’ve never heard of such a thing, you’ll be hearing that acronym hundreds, if not thousands, of times in the next three or four years; it’s likely to be more common than YKHC or AVCP.

Why an EIS?  It’s because Barrick Gold and Nova Gold submitted their Plan of Operations and Wetlands Permit Application earlier this summer for the Donlin Gold project; as a result, the National Environmental Policy Act – or NEPA – process was formally initiated.  What the NEPA process does is consider the environmental impacts associated with the proposed project by requiring the responsible agency to hold numerous public meetings where the public can express their concerns; in addition to those meetings, the public can comment in writing or over the Internet.

The EIS for this particular project is expected to take at least three years to complete.  The Army Corps of Engineers is the lead federal agency spearheading the effort and is responsible for coordinating government-to-government coordination with the tribes most affected by the proposed project.

Tribes can participate in the process in several ways: 1) on a government-to-government basis, 2) as a cooperating agency, 3) as stakeholders, 4) and/or as private citizens.  Sixty-six tribes have been formally contacted about what level of participation they deem appropriate.

The villages of Crooked Creek, Chuathbaluk and Napaimute chose to be Cooperating Agencies.  Our responsibilities in that capacity include assisting the lead agency by providing information and environmental analyses; reviewing direct, indirect, and cumulative effects; and suggesting mitigation measures for potential adverse effects.

The Corps of Engineers has hired a company to carry out the majority of the EIS components; it’s a very large company called URS Corporation that has an office in Anchorage.  URS has a core team specifically designated for working on the Donlin project, and two of their staff should be familiar to some of you here in the Kuskokwim.  Taylor Brelsford, the Senior Environmental Scientist/Planner or Project Manager, has lived in both Sleetmute and Aniak.  Taylor, an anthologist by training, has also worked for the U.S. Fish & Wildlife Service.  Moxie Alexie, who many more will know, is their Senior Rural Outreach Specialist – he’ll be working closely with the tribal and village entities throughout the process.

To get you prepped for what’s to come, here’s a snapshot of the Donlin project as spelled out in Barrick’s/Nova Gold’s Plan of Operation that was submitted with the application for permit.

If approved, the construction for the mine itself will take between three and four years and the life of the mine is expected to be about 27 years.  It will take approximately 2,500 workers to build the mine and then between 600 and 1,000 to operate it.

The majority of the power for the mine will come in the form of natural gas.  A 14-inch pipeline will run mostly underground from Beluga Point in Cook Inlet for 313 miles to the project site.  The gas pipeline will run under the Kuskokwim River between the villages of Stony River and McGrath and placed using a technique called horizontal directional drilling; the distance required for that technique is over 7,000 feet. 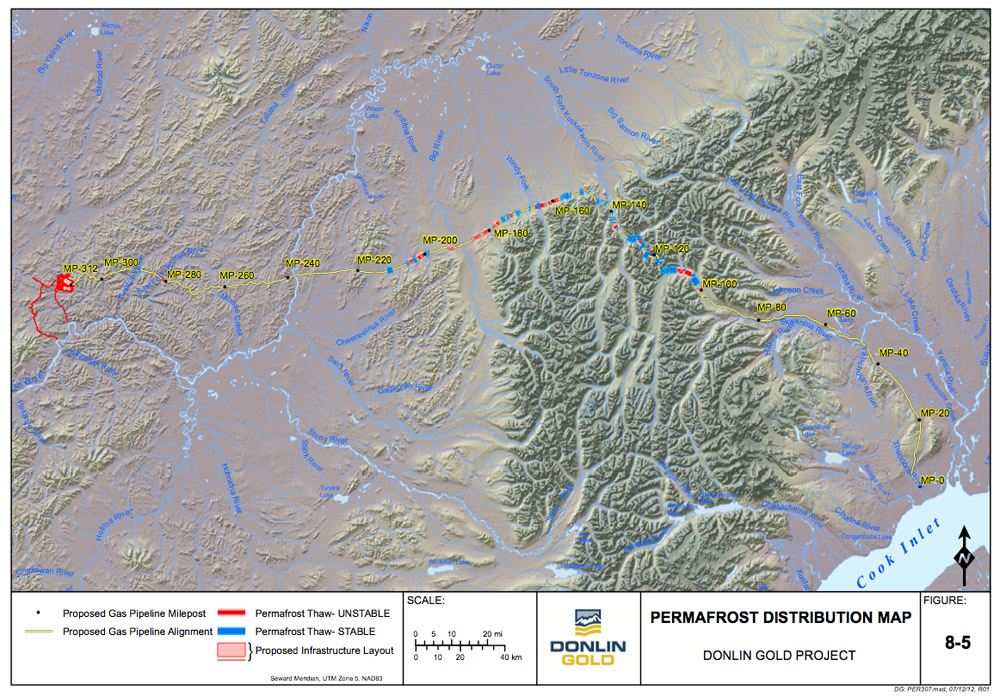 Removal of the ore to be processed will be through what is considered a typical truck and shovel operation.  The ore will come from a large open pit that could be as large as 2.2 miles wide and 1.0 mile wide; the pit could end up being over 1,600 feet deep. 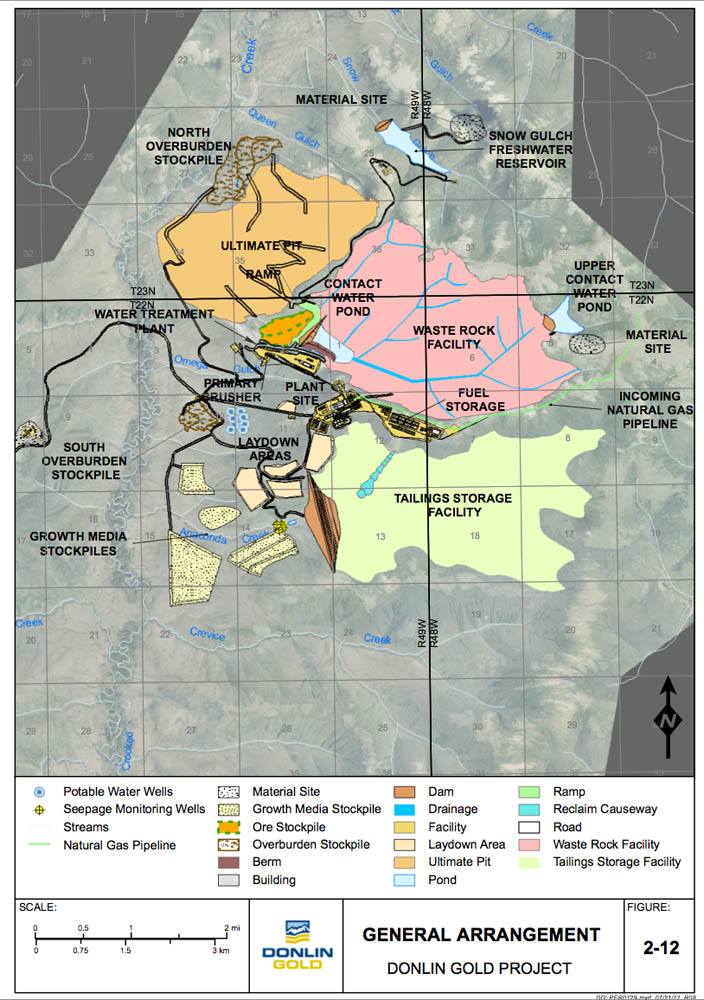 It’s expected that one million ounces of gold will annually be produced at the mine, so to say that this mine will be large is somewhat of an understatement.  Some in the mining industry claim that it has the potential to be the world’s largest producer of gold!

With those 20+ million ounces of gold produced over the mine’s life comes about 3 billion tons of waste material.  Waste rock is the material that contains no gold – for every ton of ore that contains quantities of gold worth processing there are 5.5 tons of waste material to deal with.  The waste rock will be stored southeast of the pit in the American Creek drainage (you can see the location from the previous picture).  Of that 3 billion tons of waste rock, it’s estimated that up to 7 percent of it has the potential to generate acid rock drainage.

Another byproduct of the mining process is what’s called tailings.  The tailings start out as large chunks of rock blasted from the pit that are eventually crushed and ground down to sand size particles in large revolving drums containing steel balls and bars.  From these small particles the gold is removed using a cyanide leaching process.  There is a lot more involved in the milling process – including the recycling of water and chemicals – but what remains is a slurry of liquid and sand-sized or smaller particles that will eventually wind up in the tailings storage facility (TSF) in the Anaconda Creek drainage. 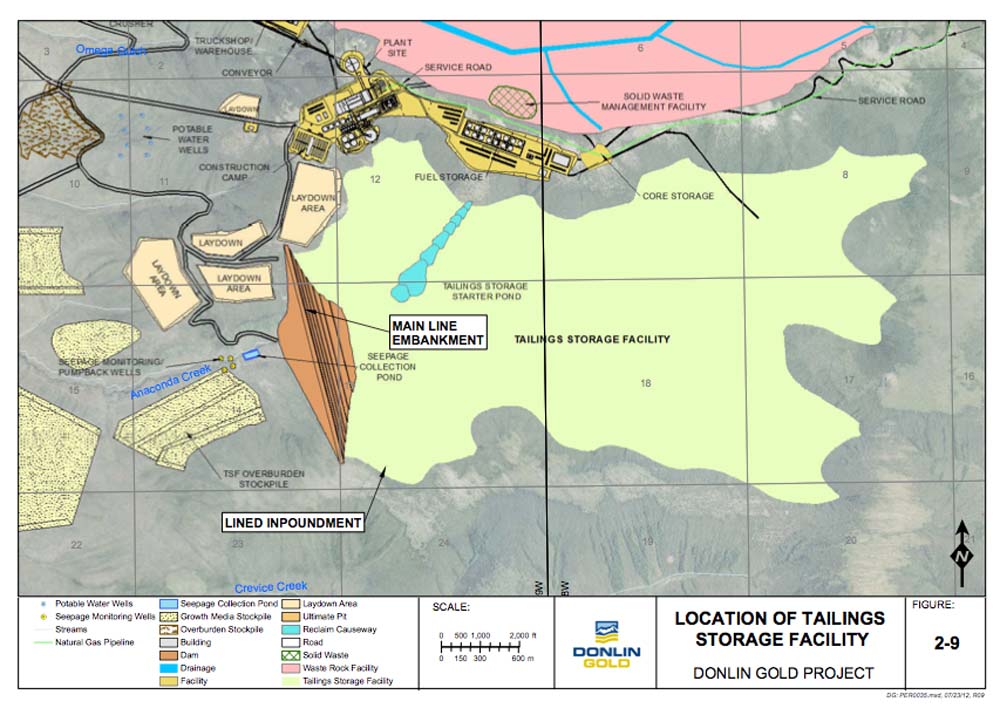 A closer look at the tailings storage facility (TSF)

This tailings storage facility will be over 2,000 acres in size or roughly 107 Bethel Airport runways set side by side (the Bethel runway is 6,400 feet long by 150 feet wide).  The vast majority of material in the tailings storage facility will be the smaller ground particles, much of which will contain some leftover chemicals from the milling process and also have the potential to be acid generating.  For this reason, the entire floor of the tailings facility will have a thick impermeable liner.  The water and chemicals collected in the impoundment will be reclaimed and continually recirculated back up to the milling facility to be used in the milling process.  The dam holding back the tailings will be 460 feet high and roughly 5,800 feet long. 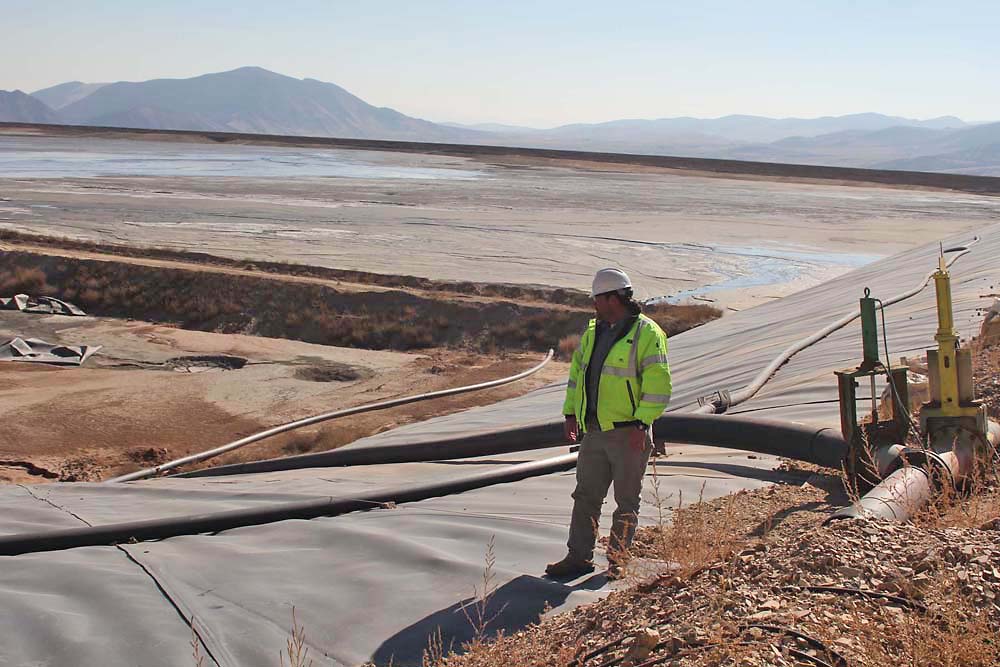 The tailings storage facility for the Golden Sunlight Mine in Montana. Note the liner that covers the bottom and sides of the facility. 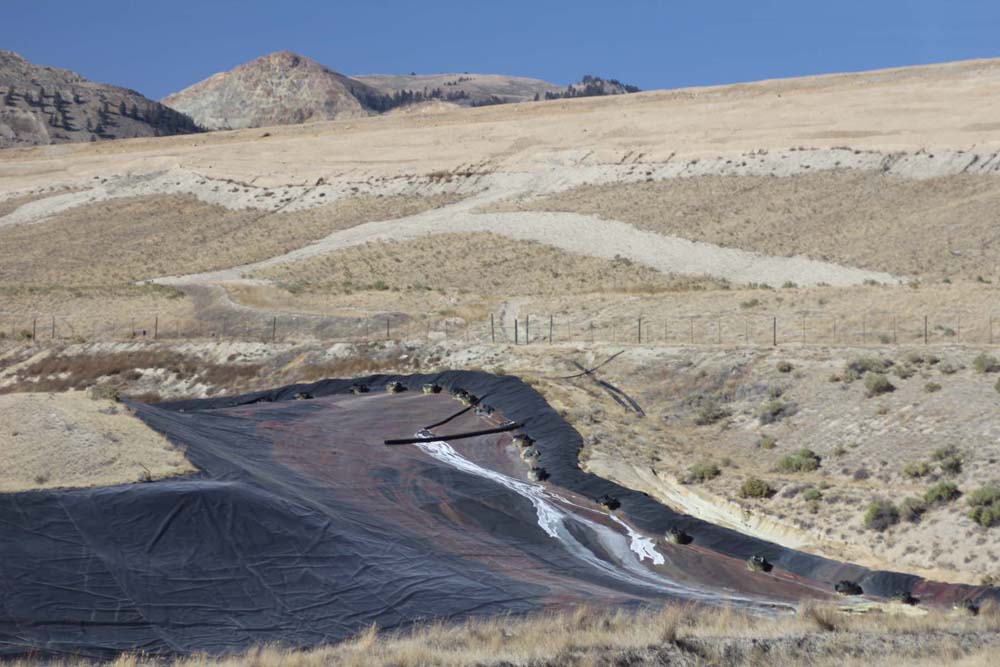 The tailings facility dam at the Golden Sunlight Mine in Montana. Pumpback wells pump water or acid rock drainage that seeps through the dam.

What’s presented here in this post is just a general overview of the Donlin Gold project.

To say that there will be a ton of information to keep up with would be a gross understatement – at times it might even seem to be as much tonnage as there is waste rock – but we’ll help as best we can to disseminate what we know in a timely and easy to understand manner; and hopefully it will be as objective as possible.

Much more detailed information is available on the official website provided by URS at http://donlingoldeis.com/

We’ll keep you posted when additional information is available.