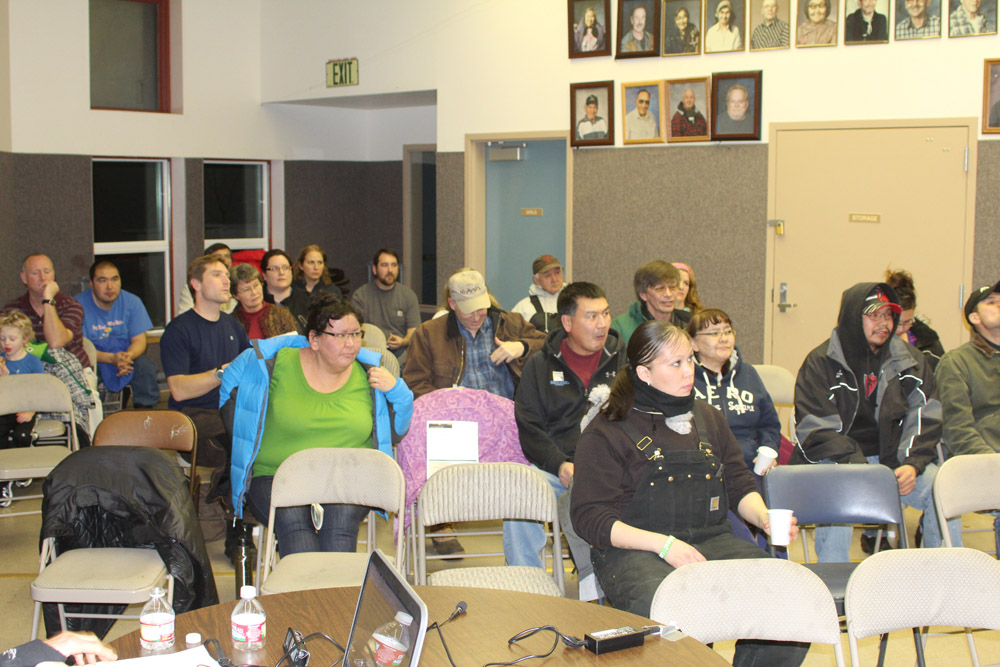 Over 40 people attended the first scoping meeting for the Donlin Gold EIS (Environmental Impact Statement) in Aniak last week.  A scoping team comprised of the Army Corps of Engineers and URS, a third party contractor, facilitated the meeting.  Also in attendance were numerous cooperating agencies such as the BLM, Alaska DEC, Fish & Wildlife Service, the Native Village of Chuathbaluk and the Native Village of Napaimute.

Several issues were brought up – which is the purpose of those meetings.  The intent of the EIS process is to identify and document the public’s concerns – then as the process moves along those concerns are to be incorporated into the draft EIS where solutions or mitigation measures are identified.  If those bringing up the concerns don’t feel the solutions or mitigation measures are adequate to alleviate the concerns, interested parties can further comment prior to the final document; with the hope of eliminating or minimizing any detrimental effects.

One of the issues brought up by a former barge captain was the effect of increased barge traffic on subsistence activities and resources.  It was noted by the scoping team that, on average, wherever your location on the river that you would see three barges – most likely one up and two down, or vise versa – each day of the barging season.

It was asked whether or not any dredging might be needed, with the concern that dredging would disrupt habitat on the river bottom.

The URS representative noted that a transportation plan was not yet completed and will be posted on web site when it is.

Someone expressed concern for the natural gas pipeline where it crossed rivers – particularly the Kuskokwim.  He was concerned that the pipeline would be too close to the river bottom where erosion could undermine the pipeline.

The same person noted that fuel storage tanks are not required to have containment facilities that will contain all the contents, and if one were to rupture petroleum projects would then get into the waterways.  (The tank at the Jungjuk Creek port site has a 2.8 million gallons capacity.)

Someone stated that they heard rumors from a state agency that fuel oil would initially be piped through the natural gas pipeline.  The scoping team stated that the permit for the mine is very specific and binding and that Donlin Gold could not pull a “bait-and-switch” by transporting something different than natural gas.  (The concern implied here is that a fuel oil leak is much more problematic from an ecological standpoint than a natural gas leak.)

One attendee asked if villages could hook into the natural gas pipeline to reduce our heating costs out here.  The scoping team noted that the pipeline would carry a common carrier designation and that if room were available that a 3rd party could rent and transport gas for purposes of power generation.

One attendee asked about public access to the pipeline corridor, expressing concern that no traditional uses would be hindered in any way.  However, another person noted that the corridor would provide easy access for people from the Cooke Inlet side traveling by snow machine or 4-wheeler to come into the Kuskokwim and compete with subsistence users over subsistence resources.

One person expressed concerns over air quality issues from things like increased emissions from barge traffic or diesel generators like that at the Jungjuk Creek port.  The person wondered if the air quality was going to be monitored up and down the river during the life of the project.

Another concern brought up was airborne mercury and how it would be monitored.  One person had concerns over its potential for contaminating subsistence foods like berries even far away from the mine site.

One person noted that the EIS process must consider not only the activity being studied, but also cumulative effects from past and potential future activities.  For instance, one person mentioned a road possibly being built from the Yukon to the Kuskokwim that although having benefits would likely have consequences, and the increased mineral exploration that has gone on in the headwaters of the Aniak and other nearby drainages, that could likely proceed if better infrastructure were in place if the Donlin project were to proceed.

As might be expected, the concern for acid mine drainage also came up.  One person questioned whether or not a single plastic liner was adequate for the tailings impoundment.

One person in attendance noted that a loophole in the Clean Water Act allows mine tailings or “fill material” to be placed directly into waterway.  This person requested that the EIS consider what the ramifications are with the loophole as is and how the Donlin Gold operation or engineering plans would be affected if the practice of dumping such material were not allowed.

One person brought up the need for a training facility in Aniak, to train local residents for the many heavy equipment and welding jobs – just to name a few.

Another attendee expressed the need for more people already trained to be union qualified.

Someone noted how the two-weeks-on and two-weeks-off schedule disrupted family life and suggested having Donlin Gold do what was done years ago at NYAC where entire families resided year-round at the camp, with schools and other amenities provided.

An attendee recommended that simple fact sheets explaining all of the typical concerns associated with such a project, things like what is acid mine drainage, the implications of perpetual water treatment, mercury contamination issues, water and air quality risks, river bank erosion from barge transport and subsistence fishing conflicts due to increased barge traffic, etc.  He noted that these sheets would be highly beneficial since people wouldn’t have to sort through hundreds, if not thousands, of technical documents.

An attendee recommended that simple fact sheets explaining all of the typical concerns associated with such a project, things like what is acid mine drainage, the implications of perpetual water treatment, mercury contamination issues, water and air quality risks, river bank erosion from barge transport and subsistence fishing conflicts due to increased barge traffic, etc.  He noted that these sheets would be highly beneficial since people wouldn’t have to sort through hundreds, if not thousands, of technical documents.

His recommendation was to mail them out to all residents, because not everyone has access to the Internet.  He closed by stating how limited prediction data were and that many people are expecting the EIS process inform them, but in reality they could easily get lost in the data and miss any window of opportunity to affect process.

The scoping team noted that Donlin Gold personnel were still analyzing some of the baseline information and that their findings would be eventually be available on-line at www.donlingoldeis.com.

They also stated that although questions were brought up at the meeting and that every comment was on the record, it was also recommended for interested parties to follow up with written comments.

In case you were not able to attend one of the public meetings, please do express your concerns in writing.