AK Forum On The Environment (Invasive Spp. Edition – Earthworms!! You’ve Got To Be Kidding)

There were several presentations at the Forum specific to invasive species where the words invasive species was in the title.  Then there were other presentations such as the marine debris discussions that alluded to invasive organisms because many of them hitchhike on all kinds of floating debris; of particular concern is the huge amount of flotsam generated by the Japanese tsunami from a few years ago.

Consequently, one of the more pressing issues the State is facing is the introduction of aquatic species.  At this very moment the Legislature is discussing House Bill 89 that was introduced by Rep. Paul Seaton of Homer who chairs the House Fisheries Committee.  The bill would require the State to devise a rapid response and management plan to deal specifically with aquatic invasives.

Besides the concern for invasives coming in on the tsunami debris, another driving force behind this bill is the infestation of something called “sea vomit”, which has been found in a harbor near Sitka.  This invasive organism is a tunicate, or little critters that attach themselves to docks, rocks, oyster cages and the undersides of boats.  As you can see in the photo, en masse, their pale orange color does tend to look like human barf…not a pretty sight.  Tunicates also go by the name of sea squirts because they have two siphons like openings where one takes in water and the other expels it.

And then there is Elodea – or common waterweed – something I’ve mentioned before on this website and something we are really trying to keep out of the Kuskokwim.  As is the case with invasives, Elodea seems to be popping up in more and more places; not long ago it was discovered in Stormy and Daniels lakes on the Kenai Peninsula (it’s also in three float plane lakes in Anchorage).  Unfortunately, it may only be a matter of time before it makes its way to our lakes, ponds and rivers.

But are invasives really that big a deal here in Alaska…especially some of those things that provide some kind of a benefit?  I’ve had more than one person claim that biologists like me are just alarmists.  Well, one must keep in mind that there is a difference between an introduced species and an invasive species.  An invasive species is one that eventually causes problems, either ecological or economic.  Invasive species are such a problem that 1.4 trillion dollars is spent worldwide trying to control them.

Here’s one that I’ll bet no one here in the Kuskokwim or lower Yukon has ever thought about being a potential problem, let alone even knowing that they existed here – earthworms!

Years ago I would have had the same reaction that those naysayers who accused me of being an alarmist would have.  I’m going to flash back to when I was a fledgling biologist about twenty years ago.  Keep in mind that I wasn’t always a biologist, I was in my mid thirties when I decided to go back to college to become one…so I know how those naysayers think.

I recall several times discussing with fellow biologists the toll that invasive species were taking on natural biological diversity.  I was fully aware that the introduction of many fish species like carp (originally from Europe), brown trout (from Germany) and brook trout (although native to the east coast, brookies wreak havoc with native cutthroat trout in the western states) was not a good thing.  I’d seen first hand where introduced rainbow trout from the west coast had reduced natural diversity in Montana, Wyoming, Colorado and New Mexico by interbreeding with the native cutthroat and tainting the genetic purity of several subspecies.

Although well aware of those particular concerns on local fish species, if I was to look up the word ignorance in a Webster’s dictionary back then I’d have seen a picture of myself!  Here’s the definition:  lack of knowledge or information: he acted in ignorance of basic procedures.

How ignorant was I?  During a conversation with fellow biologists I once joked about how fishermen like me would someday have to be careful about where they dumped their leftover worms…not knowing that that was – or could be – an ecological concern.  At the time I thought that if any biologist brought up the fact that transplanting worms was a bad idea, that they’d get laughed right out of the room.

Well, now as a biologist that knows better – I’m going to bring it up and hopefully you won’t accuse me of being an alarmist.  Here’s a picture of the known locations introduced worms that have taken hold in Alaska, and I’d be willing to bet that most were originally brought in intentionally – something I’ll discuss shortly. 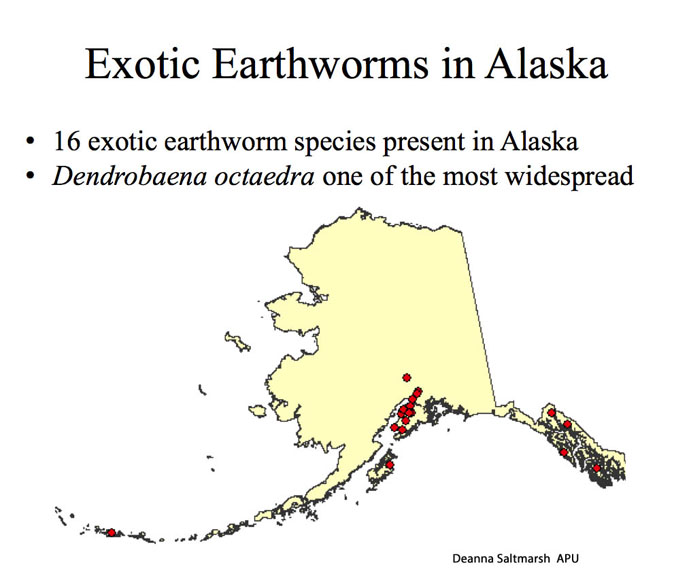 The following links highlight the concerns in the Great Lakes Region:

I’ll bet that most Minnesotans didn’t think worms were a problem years ago when many probably introduced them intentionally; the vast majority undoubtedly still isn’t aware of the ecological implications.  But the photos below show how drastically they affect the forest floor over time.  As the worms are displacing certain vegetation, other animals reliant on the vegetation will also be displaced; hence, cascading effects. 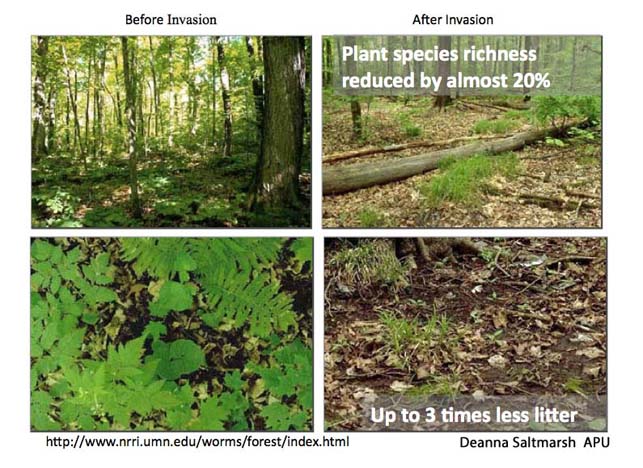 Looking at the Alaska map, it might be apparent that wherever people concentrate and rapid development occurs, there’s a good chance that invasives won’t be far behind.  The Kenai Peninsula is a good example, and it continues to grow at a rapid rate.  On average, 1.5 new houses are built per day there.

But are those worms and other invasives limited to the road system and housing developments?  Not really.  The Kenai National Wildlife Refuge is located pretty much in the middle of the Peninsula, and like any national wildlife refuge, they are mandated to manage for natural diversity.  Although worms were common mostly around roads and boat launches, they were found even in remote parts of the refuge.  Five different species of worms were found in 70% of the sites that were sampled.   Alarmingly, their studies determined that winter temperatures were probably not a limiting factor. 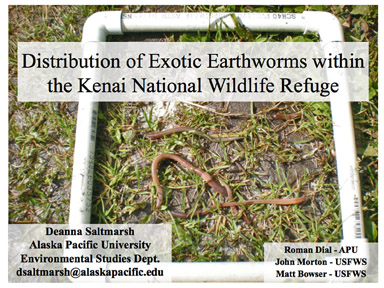 It’s uncertain whether or not the temperatures today around Fairbanks may be too harsh for worms to thrive – but climate change is likely to make conditions more amenable.

Besides, the climate isn’t all that different between the middle Kuskokwim and Fairbanks – and worms are here in several gardens in Aniak and Napaimute…and most likely many of the other local villages.  I’m willing to bet that most, if not all, were brought in intentionally for composting and other gardening purposes.

But it’s understandable that people intentionally introduce such things, especially since some institutions promote the use of such introduced species.   Case in point is the following UAF brochure that mentions one of the exotics found on the Kenai Peninsula (i.e., Lumbricus rubellus). 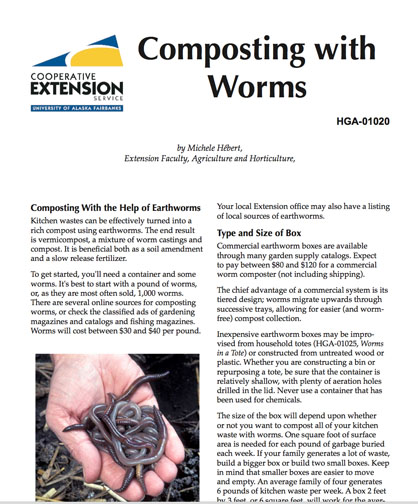 A UAF publication encouraging the use of worms for composting

I’m afraid that the extension agents in Minnesota and other Midwest states wished that they weren’t as effective in encouraging the use of worms as part of their educational outreach efforts.

And on the website below, it even mentions that people wanting to purchase worms are environmentally conscious – “You’re obviously environmentally aware”.  Well, maybe not!  I haven’t looked lately, but maybe Uncle Jim’s picture has replaced mine in the Webster Dictionary. 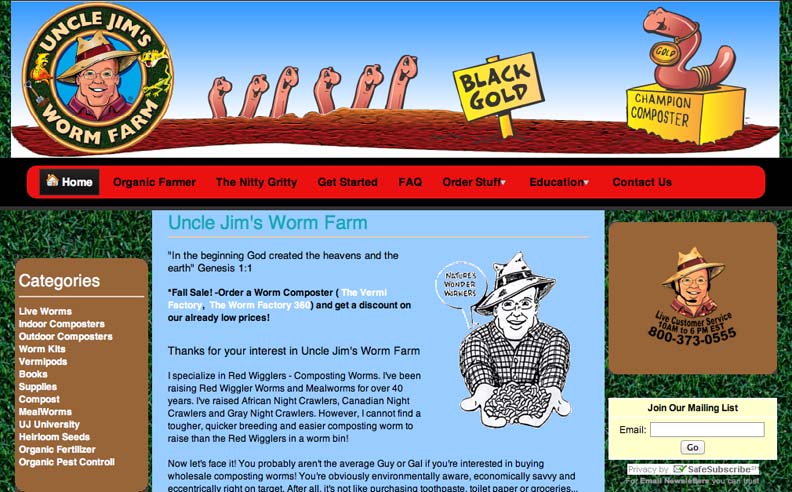 I'm sure he means well!

All too often well-intentioned people, including biologists, didn’t foresee a problem with introducing some “benign” organism, only to find out years later they should have left well enough alone!

When it’s all said and done, invasive species might just be the biggest contributor to the decline of a whole host of wildlife species.

So maybe…just maybe, someone here in the Y-K Delta is thinking about composting and buying red wigglers from Uncle Jim.  All I can say is – Please Think Twice.