What Lowered Escapement Goals Mean For The 2013 Kuskokwim Fishing Season

The Alaska Department of Fish & Game put out their first news release of 2013 back in January following the Board of Fish meeting.  I’ll quickly point out a few items of interest here, and in future posts will discuss the highlights from the Interagency and Kuskokwim Salmon Management Working Group meetings held in March.

This drainagewide goal was established from what’s called a “run reconstruction” exercise that’s been in the works for several years and completed this past year.  Biologists use the term model for such exercises, and use computers to represent or describe something in the real world…or they can be used to predict something like the run size for king salmon this coming summer or a moose population several years from now.

The salmon escapement numbers are based on a wide range of information collected as far back as 1976, and includes weir counts, aerial surveys, subsistence and commercial harvest estimates, and salmon age information.  When this information is entered into the run reconstruction model it generates estimates of the number of kings that returned each year from 1976-2011.  For years after 2011, the biologists can now simply input new information and generate an estimate for the total run size for that year.

The new goal that ADF&G established for kings ranges from 65,000 to 120,000; the historic average, however, is about 150,000 kings.  Keep in mind that escapement goals are above and beyond what’s caught in the subsistence, commercial and sport fisheries…those are the harvestable surpluses.  In 2010 roughly 56,000 kings returned to the spawning grounds – the lowest ever observed, and in 2011 approximately 73,000 escaped.  If you were paying attention last year you’ll recall that king salmon numbers were down pretty much across the entire state; so something seems to be affecting ocean and/or freshwater productivity somehow, somewhere; more than likely, the main culprit appears to be environmental conditions.

How important then is the 65,000-120,000 range for management, particularly the low end of 65,000?  Going into the season – and as the season progresses – that will be the principle factor that will drive management actions.  Looking back again to last year, the critical number was set at 127,000.

Given that the run was again weak last year, as the season progressed both the Bethel Test Fishery and subsistence catches indicated that it was unlikely that we’d end up with that many kings returning to the spawning grounds; hence the contentious closures.

But many people claimed that the Bethel Test Fishery wasn’t doing a very good job of indicating the run strength, pointing out that the deeper running fish weren’t being caught; subsequently, lots of people were saying that there were more fish in the river than ADF&G was asserting.  However, the aerial surveys and weir numbers at the end of the season validated what the test fishery was indicating – that the kings just weren’t here in great numbers.  In fact, none of the weir projects met the previously established escapement goals, while several passed the lowest numbers ever recorded.

The run reconstruction not only allowed the Fish & Game to determine a drainagewide escapement, but it provided an opportunity to closely examine the existing goals set for the weir projects.  After looking at previous year’s data, ADF&G concluded that many of those projects have been in operation when overall productivity levels were higher; now with a downturn in productivity, they opted to lower the Kwethluk, George and Kogrukluk river goals – the projects with the most reliable information.

How does that fit into the upcoming 2013 fishing season?

From the short-term perspective there’s an upshot to the changes in the escapement goals: with lower goals there is a lower likelihood for restrictions.  Still, according to the model, the 2013 king salmon run is expected to be similar in abundance to 2012; if that’s the case, the Fish & Game and USFWS may feel the need for some restrictions to allow more fish to reach the spawning grounds.  With lower goals, however, any restrictions wouldn’t be as severe and shouldn’t be implemented as early as would be with the higher escapement goals.

Here’s the January News Release showing the proposals brought forth before the Board of Fish and whether or not the Board adopted them (older and more current and Kuskokwim News Releases can on the following ADF&G web site  http://www.adfg.alaska.gov/index.cfm?adfg=cfnews.main). 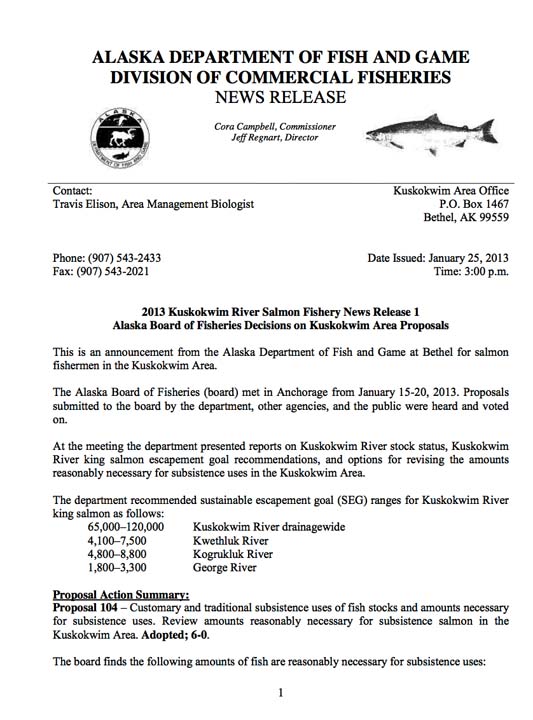 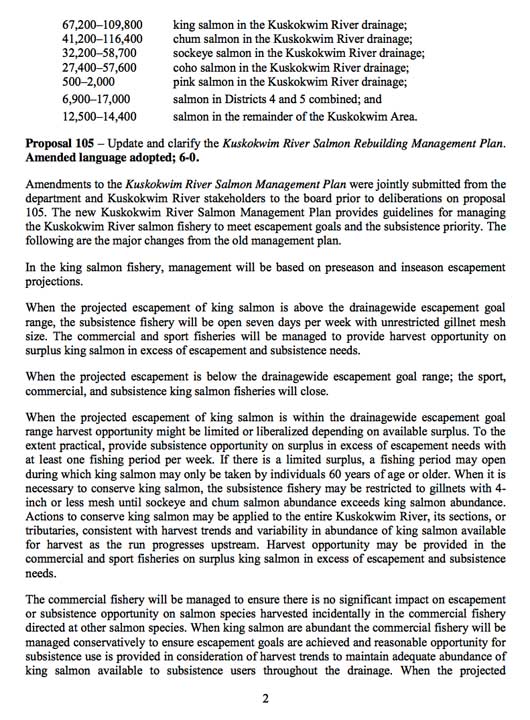 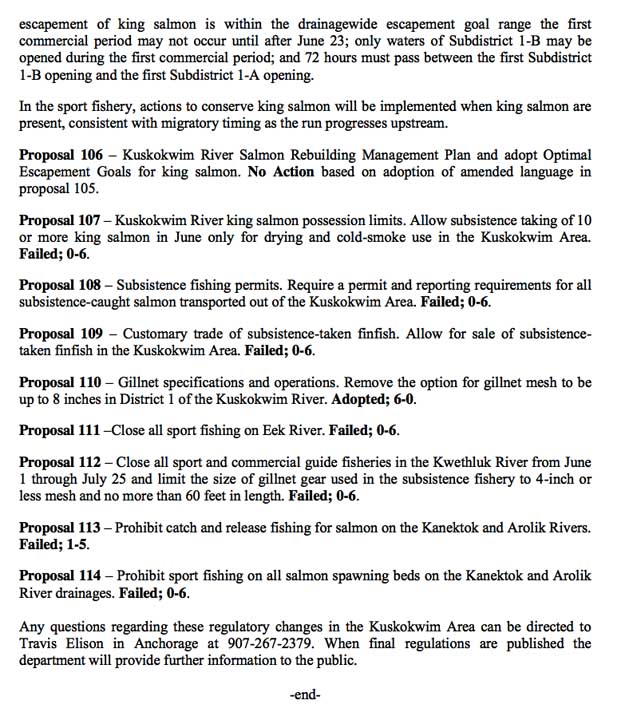