The Kuskokwim Salmon Management Working Group met on May 10 to discuss the management of the upcoming fishing season.

There were several interesting points brought up at this season’s first teleconference since the Working Group meeting in March in Anchorage – here’s what I found interesting:

James Charles feels that the word needs to get out that Working Group members do not get paid for their efforts.  He believes that this misconception has arisen since the meetings are now held during the day as opposed to the evening like they were many years ago.  And it seems that that misconception goes even further because there are people under the impression that many of the decisions of the Working Group members are influenced because of the pay.

That simply is not the case.

The Working Group members are working for their fellow fishermen; they represent the people of their villages.  Some of the members represent subsistence fishermen, some commercial fishermen, and a few represent sport fishermen and guides.

The members of the Working Group are extremely dedicated and sacrifice much.  They keep long hours – this last meeting alone lasted nearly four.  Members often sit through these meetings while others are out fishing or hunting.  And many of the Working Group members get phone calls at all hours of the day and night…often getting chewed out by their neighbors when the runs are weak – especially during closed periods like we experienced last summer.

During the meeting someone asked the question if people always used large mesh gear when subsistence fishing – and if not, when did it become popular.  Bev Hoffman said that a respected elder told her how the big kings would tear up their homemade nets years ago, so they used smaller mesh gear to target the smaller kings as well as chums.  Bob Aloysius said that the larger nets have been common ever since the commercial fishery opened because, “The bigger fish brought bigger money”.  He also said that when he was growing up near Kalskag and Aniak that there was no such thing as a targeted subsistence king fishery.

Now we hear some people saying that taking king salmon is their cultural and religious right.  No doubt kings are important to everyone, but I’ve also talked to elders in the middle river who said that they never used to target the kings specifically.

So what about this coming season – will it be like last year?

There is one thing that all Working Members have come to learn over the past few years, and that is that our king salmon numbers are some of the lowest we’ve ever seen; consequently, there is a real need for conservation.  They know that without adequate escapement of adults to the spawning grounds, there will be no opportunity for anyone to meet their subsistence needs in the near future…for king salmon anyway.   We actually saw that last year; the most recent data show that.

Although all the years’ data on the graph below prior to last year are accurate, the data for last year are preliminary; none-the-less, the numbers are very startling.  Even if they change, they won’t change by much. 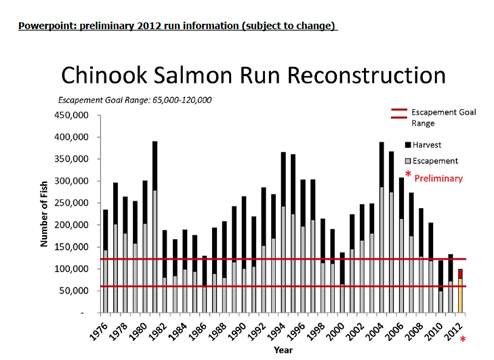 The black bars on the graph designate how many fish were harvested each year – and that includes both commercial and subsistence.  Keep in mind that in the past few years relatively few kings were harvested in the commercial fishery…usually only in the hundreds.  The subsistence harvest of king salmon, however, annually averages around 70,000.  The light gray bars denote how many fish returned to the spawning grounds (referred to as escapement).  You can see that in 2010 more kings were harvested than ever made it back to spawn.

In contrast to that,  you can see that 1981 had the highest escapement – about 280,000 while several other years had over 250,000.  So there are substantial fluctuations.

Never before have we seen three such low years in a row…and 2010 was the lowest ever recorded at only 49,000.  Keep in mind that the entire state has experienced low returns of kings, so although many people are concerned with bycatch of Kuskokwim and Yukon bound kings, that’s not the real problem.

Now note how there’s a pattern of high and low periods that alternate roughly every 6-7 years.  That reveals that there has been some type of density dependence going on somewhere either in fresh water or the ocean.  The average female king salmon produces about 5,000 eggs, so when the escapement is high more young fish are competing against each other to where if food is limited, many don’t survive to make it back years later to spawn.  Fortunately, for the offspring of the low return years, those juveniles don’t seem to experience that competition and sometimes can rebound back like gangbusters (example – 2000 had only an escapement of 65,000 kings yet 5 years later 275,000 came back to spawn).  If we’re lucky, we’ll soon begin to see an upturn.

On the graph you see two horizontal red lines, that is the range that the Department of Fish & Game would like to see return as escapement each year.  Recently the Department established a new range at between 65,000 and 120,000 for the entire river system.

Of special note is that last year only a little over 20,000 kings were harvested in the subsistence fishery.  No doubt that had something to do with the closures that no one liked, but besides those folks that fished in the name of civil disobedience, many people still sacrificed by harvesting other species.

If those sacrifices didn’t occur, could you imagine how low the escapement would have been?  At every Working Group meeting this statement regularly pops up, “We only take what we need”.  Well, if every family only took what they normally need (drainage-wide that’s about 70,000) there would have been only about 30,000 kings return to the entire Kuskokwim to spawn; that’s how many might return to the Aniak River or the very upper Holitna in a good year.  You can see from the graph below that in 1995 & 2005 that the two tributaries above the Kogrukluk River weir had over 20,000. 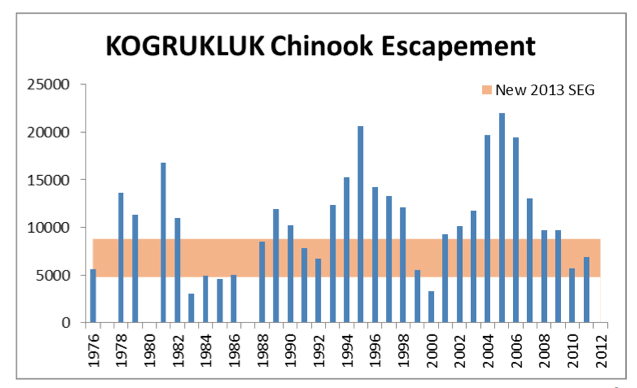 Kogrukluk River weir passage – the longest running enumeration project in the Kuskokwim. The weir is on the upper Holitna River roughly 130-miles from Sleetmute.

The last three years of escapements in the entire Kuskokwim are very alarming because a long-term trend like that is not sustainable.  This year the Working Group, the Department of Fish & Game and the Fish & Wildlife Service will be working together to minimize the personal hardships up and down the river while striving to meet the necessary escapement levels to bring back the kings.

Although there are no plans to begin the season with any subsistence restrictions, be prepared in case there is a need for closure periods or other restrictions such as a limit of a mesh size no larger than 6-inches.

Please have a contingency plan that allows you to alter your harvest activities by going after more sheefish, chums, sockeye and silvers.  It’s in everyone’s interest to conserve now for future generations.