It looks like people are having success catching kings in the lower portion of river.  Here are the results of ONC’s in-season harvest surveys that will be discussed at tomorrow’s Working Group meeting. (The entire Informational Packet can be found at http://www.adfg.alaska.gov/index.cfm?adfg=commercialbyareakuskokwim.salmon#/management) 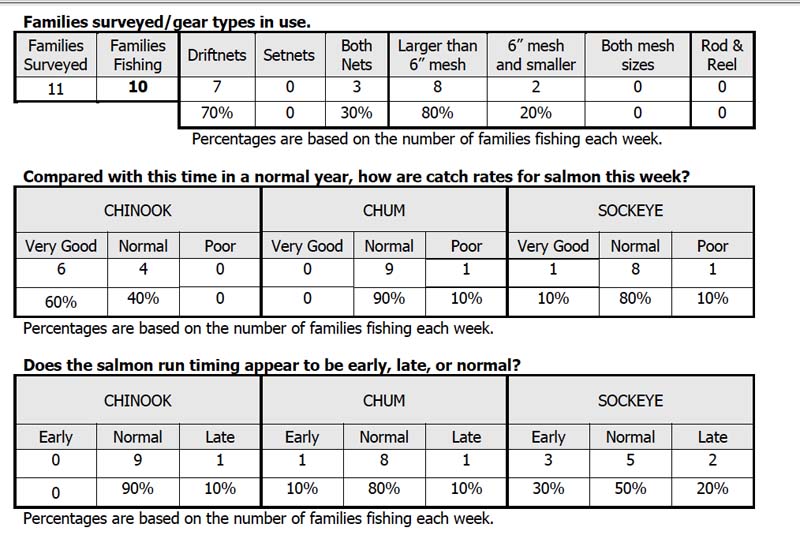 As you can see, 80% of the fishers are mostly drifting and using gear larger than 6 inches while 60% of them say the fishing for kings is very good.

The vast majority of those surveyed feel that the run timing is normal.

Although the water temperatures had been colder than average, the warm weather we’ve been having has brought the temperature at the Bethel Test Fishery site closer to – or above – normal. 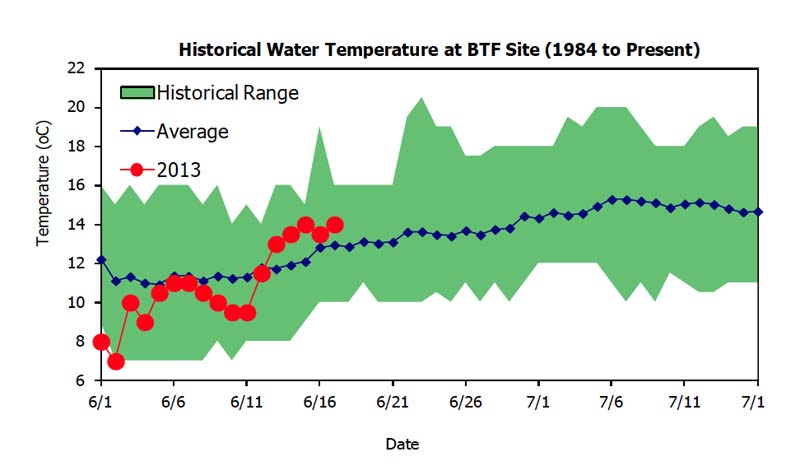 Now that the majority of snow has  melted in the lower and mid elevation locations water levels are near normal. 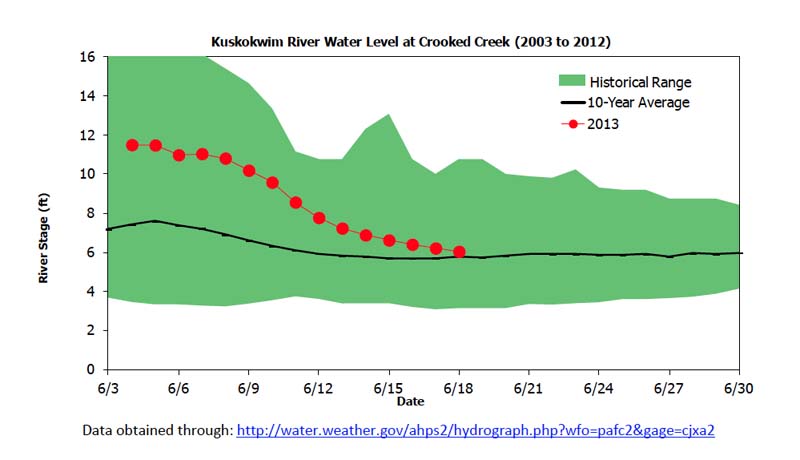 Now we’ll look closer to what the Bethel Test Fishery is showing in regards to the king return. 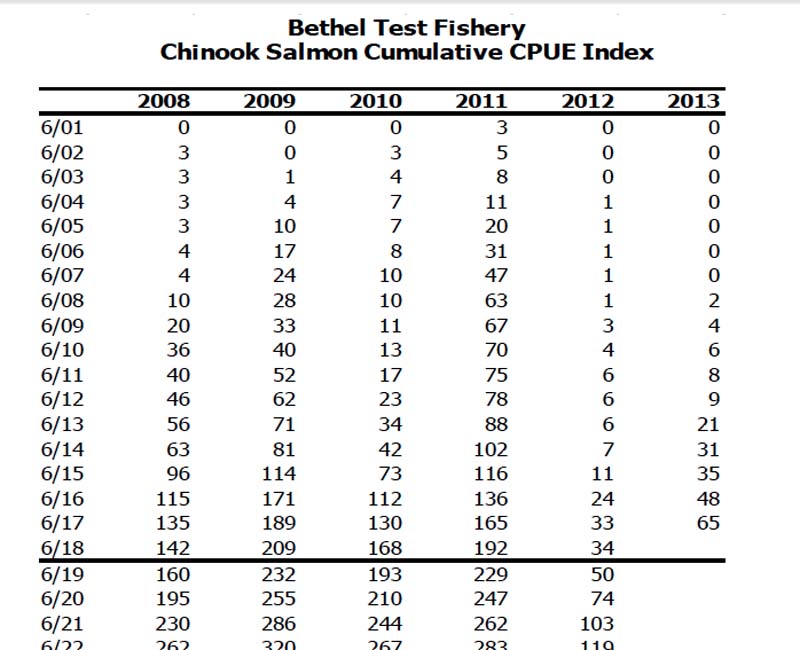 Bethel Test Fishery data as of Monday the 17th.

As of Monday a total of 65 kings has been caught by the Bethel Test Fish crew.  That’s obviously better than last year when only 33 had been caught by that date, but it is well below all the other years.  Note that so far that number of 65 is half of the 2010 year where we had 130 by the 17th; that turned out to be the lowest escapement ever recorded (see graph below).

So although people seem to be catching adequate numbers of kings downriver, and some folks are doing alright in the middle river, we must still be very vigilant and cautious that we don’t harvest too many before we have a good idea of what this year’s run strength really is.

Here’s a look at those same numbers in the previous table in a different format. 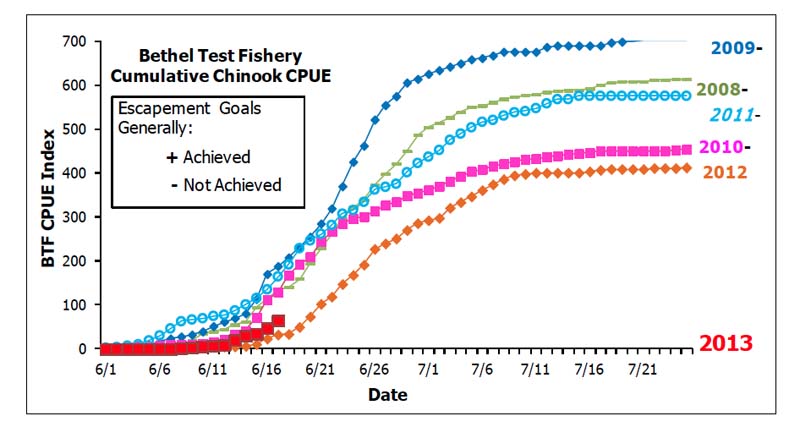 Take note that in all those years we didn’t meet escapement goals, but they were higher than they are now (the lower bound is set at 65,000).  It’s possible that we could meet the drainage-wide escapement target for this year without further restrictions (right now several tributaries like the Kwethluk and Kisaralik are closed to fishing), but it may still take some conservation measures.

Here’s a look at the Run Reconstruction numbers to put everything in context…and showing just how low the escapement and harvest numbers have the past few years. 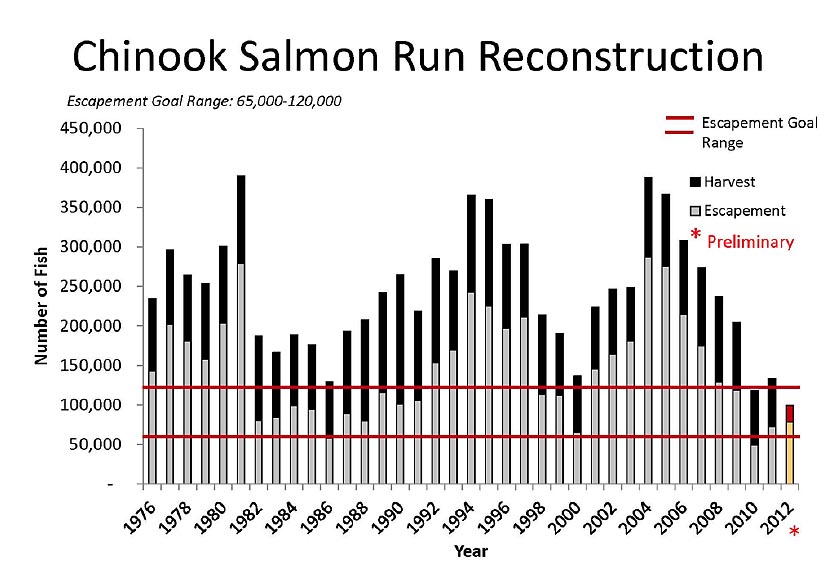 Attaining the escapement goal will be the topic at hand during tomorrow’s Working Group meeting.

The meeting begins at 10:00 A.M. and will be held at the Fish & Game’s conference room in Bethel. If you are interested – do stop in.