Once An Invasive Weed Geek Always A Weed Geek

Some say that the difference between a rose and a weed is a value judgement, but I’ll never look at an invasive weed the same now that I’ve been indoctrinated as to their potential ecological impacts…especially in Alaska.  I’m back in Pennsylvania tending to some personal business but while I’m here I can’t help but notice the introduced and invasive plants that are prevalent in the neighborhoods of my youth.

The first one I noticed while driving from the airport to my father’s residence was butter and eggs (a.k.a. yellow toadflax), which we have in several middle Kuskokwim villages.  This plant, although not spreading rapidly in our region, may someday be problematic.

Introduced plants like lambsquarters and chickweed that don’t pose significant problems are everywhere here in PA much like they are in all our villages.

One dandelion-looking plant particularly caught my eye; it was spotted or hairy catsear (also known as false dandelion).  I observed it in lawns and grass strips adjacent to roadways and it was mixed in with plain old dandelions; the scientific name is Hypochaeris radicata.  A few years ago there were a few of these observed in one location in Aniak, but hopefully they’ve been eradicated (I’ll verify that this summer). 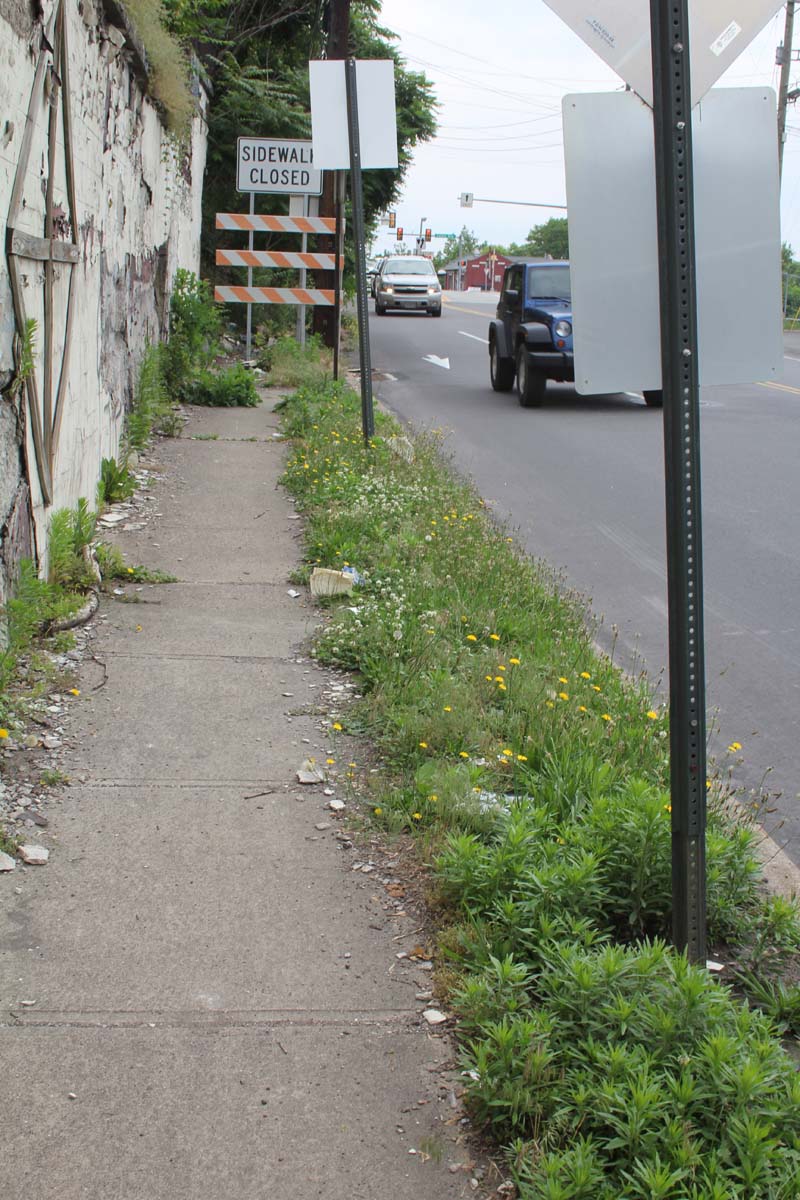 One super nasty invasive that was common on a disturbed hillside was spotted knapweed.  This one plant has caused major problems in places like Montana and Wyoming because it outcompetes native grasses and plants that livestock and wildlife prefer; they are considered one of the worst weeds on agricultural land.  The state of Montana spends millions of dollars a year trying to control this one plant.  In most every state, including Alaska, spotted knapweed is classified as a noxious weed. 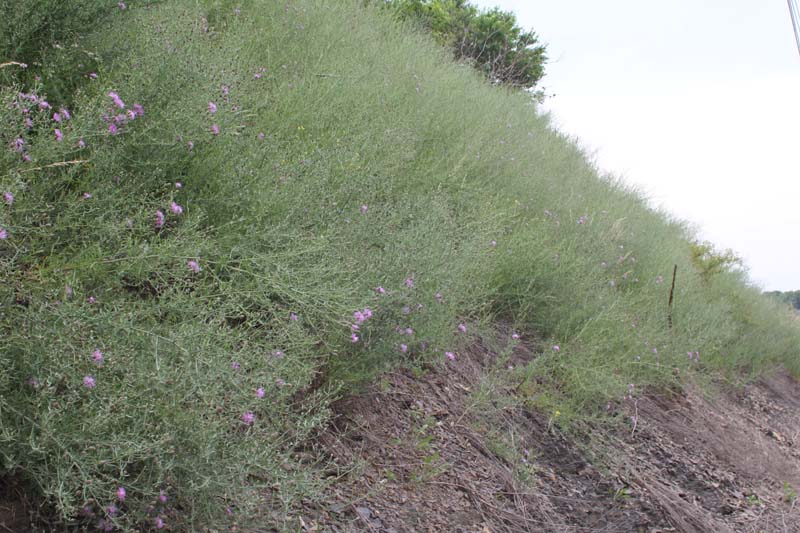 Spotted knapweed on a disturbed hillside

There were 23 known infestations of spotted knapweed in Alaska from Prince of Wales Island in Southeast to Valdez, Kenai and Turnagain Arm in Southcentral before an intense eradication effort kicked in – but there may still be a few around (http://www.washingtonpost.com/blogs/capital-weather-gang/wp/2013/06/18/record-shattering-heat-bakes-alaska/).  However, we’re fortunate that it’s not known to be in the Kuskokwim (hopefully I won’t bring it back with me!)*.

And then I couldn’t miss a species of knotweed, a large leafy plant from Asia that is found on Kodiak Island and has taken over salmonberry patches in places like Juneau.  Here in Pennsylvania it has taken over many areas along the Susquehanna River (you can see from the two attached photos just how thick it can get).  Once established, it’s nearly impossible to eradicate; it’s overtaken sections of Europe. 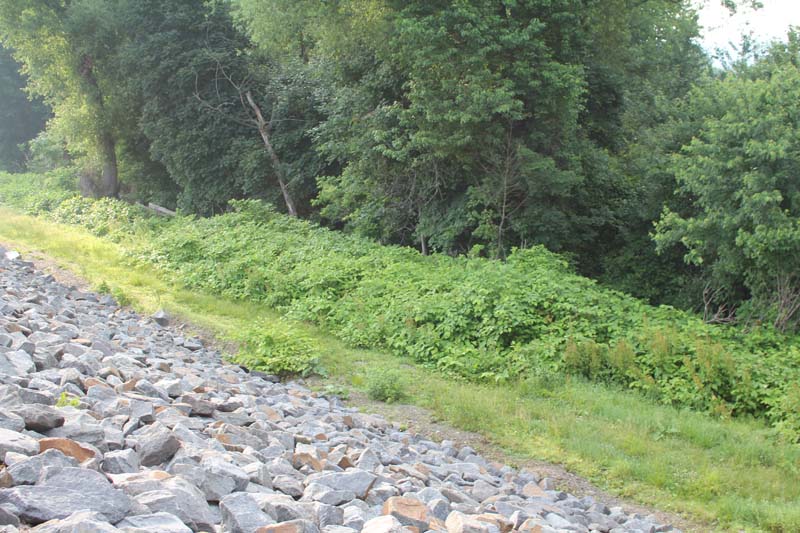 Knotweed along a Pennsylvania river dike 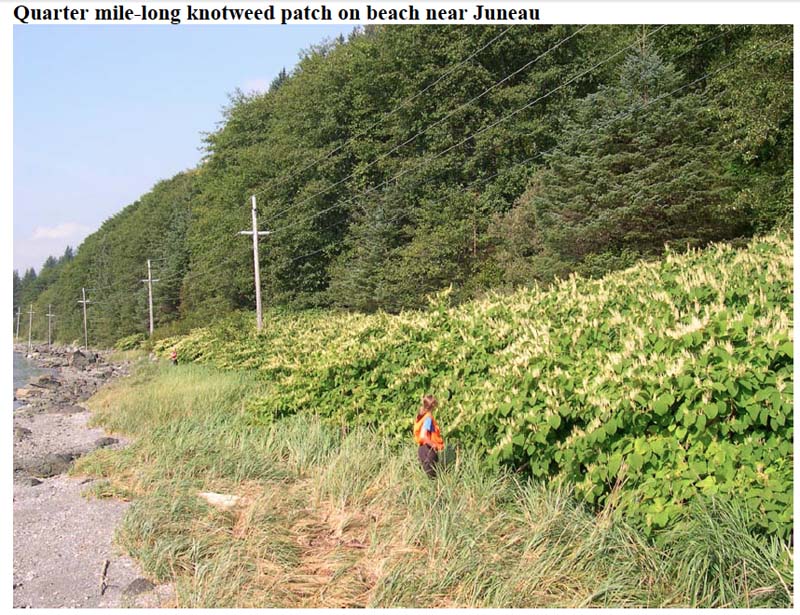 Knotweed that has taken over a salmonberry patch near Juneau

* I included this photograph of my boots to show how any of us may indeed bring unwanted plant species back from our travels if we’re not careful.  These are not spotted knapweed seeds…but they could possibly be knotweed or other species!  If traveling abroad, please do what I did and thoroughly clean your shoes, pant legs, etc. before returning to Alaska. 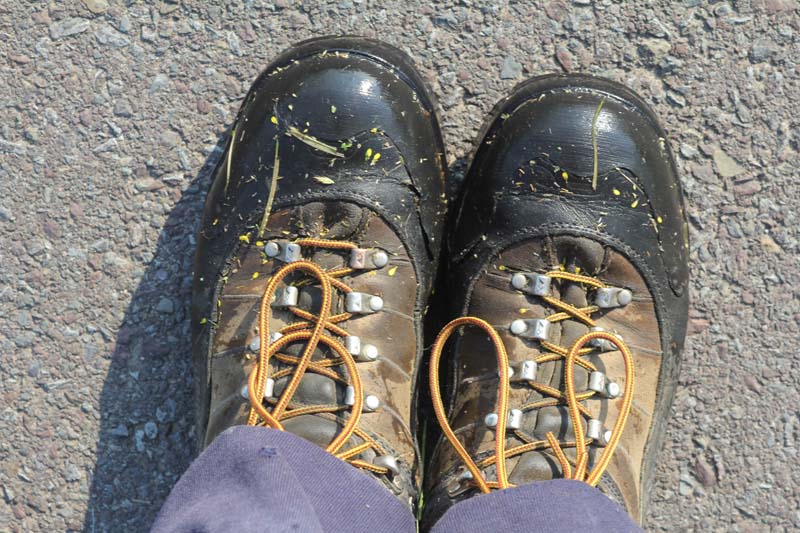 My shoes after tromping through non-native plants of Pennsylvania