The Bethel Test Fish (BTF) numbers never have picked up all season and the 2nd pulse of kings doesn’t seemed to have materialized.  All indications are that this year is going to be a poor showing for kings on the spawning grounds – we will be lucky to meet the  drainage-wide escapement goal of 65,000.

Some years the BTF does not track real well with what is actually in the river and what winds up on the spawning grounds.  It’s really only an index or an indicator of abundance.  Years of extremely high or low water years tends to throw the results off some; in high water years it tends not to catch as many (the fish can be spread out across a larger area) and in low water years its catch-ability increases.  This year we had a little higher than normal water up until June 17th, then the water dropped below average from the 28th through July 2nd.  We’ve had low daily counts the entire season, and during the lower water period when the test fishery should have a better chance of catching fish, the numbers were – and still are – alarmingly low.  Only one day from June 29 to July 5th caught greater than five kings.

It’s still uncertain whether this is a normal year as far as run timing or a late year – that all depends on who you ask.  At the last working group meeting on the 2nd the Department’s models indicated that on that date nearly 80% of the run had passed Bethel.  However, looking at the daily numbers since June 28th, the models were probably wrong; it’s more like 90% of the run had already gone by which would greatly affect the numbers we eventually see at the weirs. 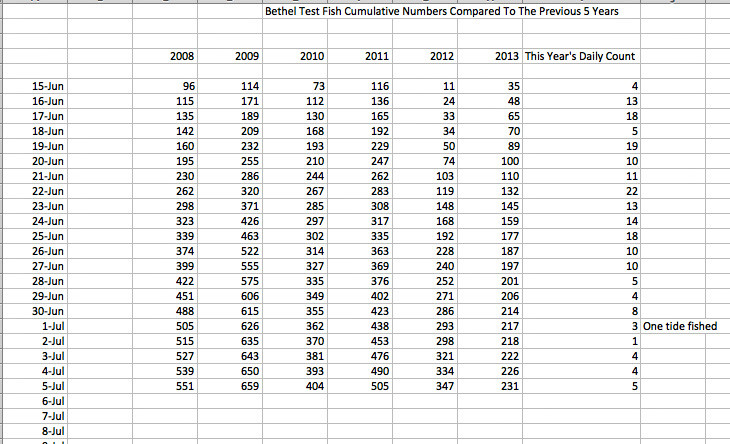 So lets look at the weir numbers.  First we’ll start with the George River weir for this year. 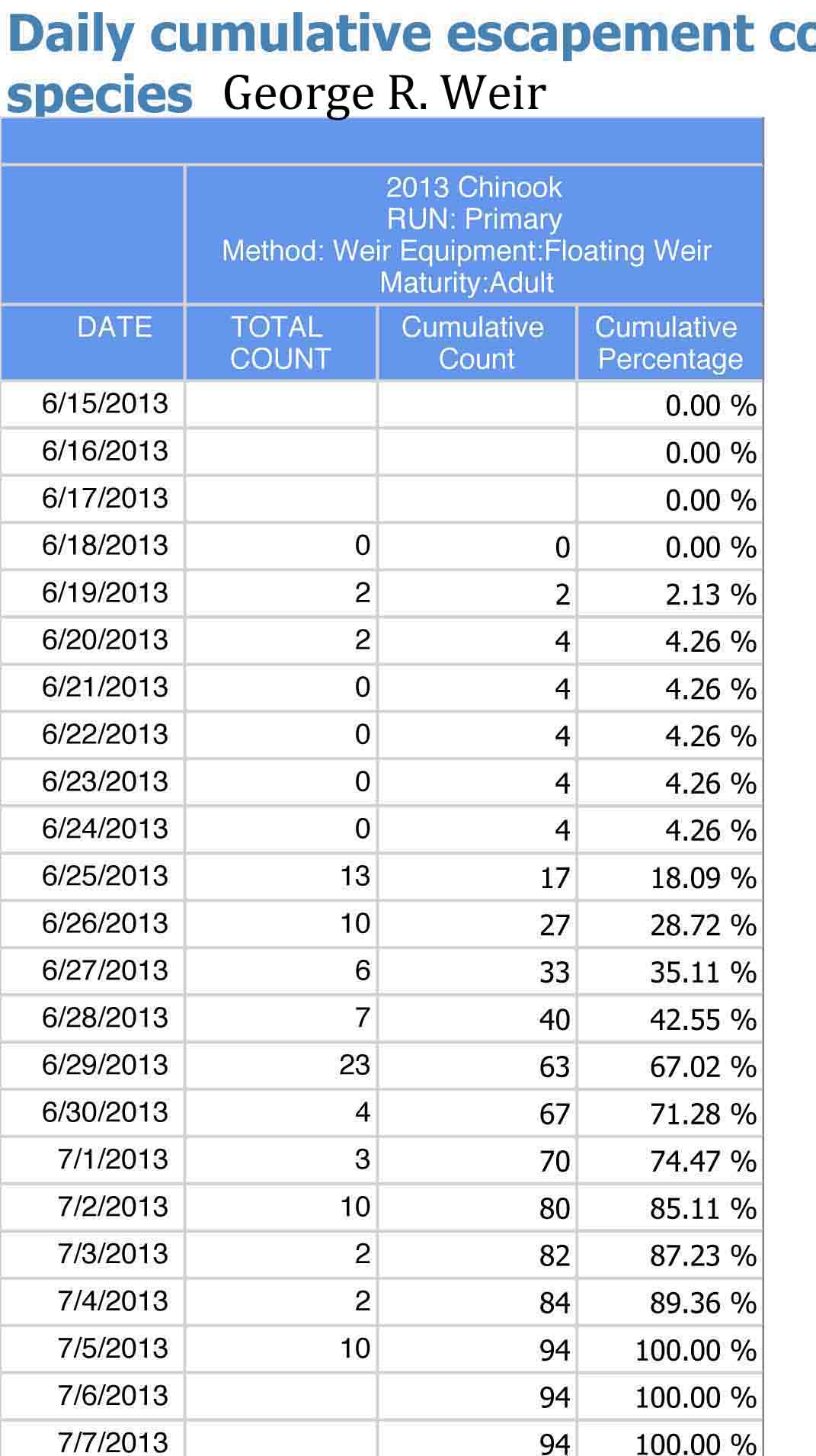 Compare those to past years from 1996 through 2009 (for the previous three years results go to http://www.adfg.alaska.gov/index.cfm?adfg=commercialbyareakuskokwim.salmon#/management  and click on Information Packet 7/2)

Only 94 kings have been counted at the George River weir as of the 5th.  There are still two days to go until the 7th, but the current weir counts are nowhere near what they were in the above table.

Lets look now at the Kogrukluk, Tatlawiksuk and Takotna weirs. 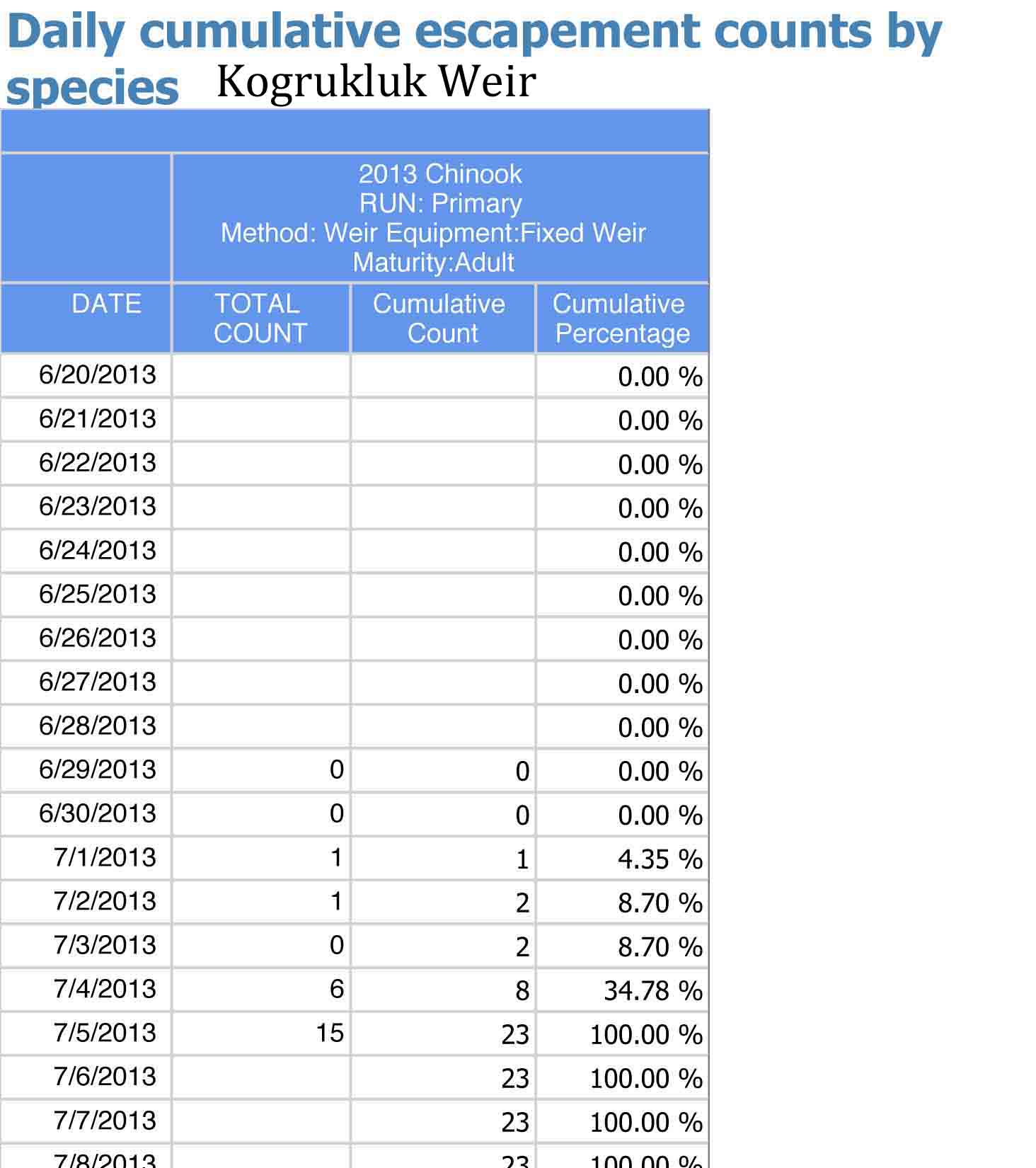 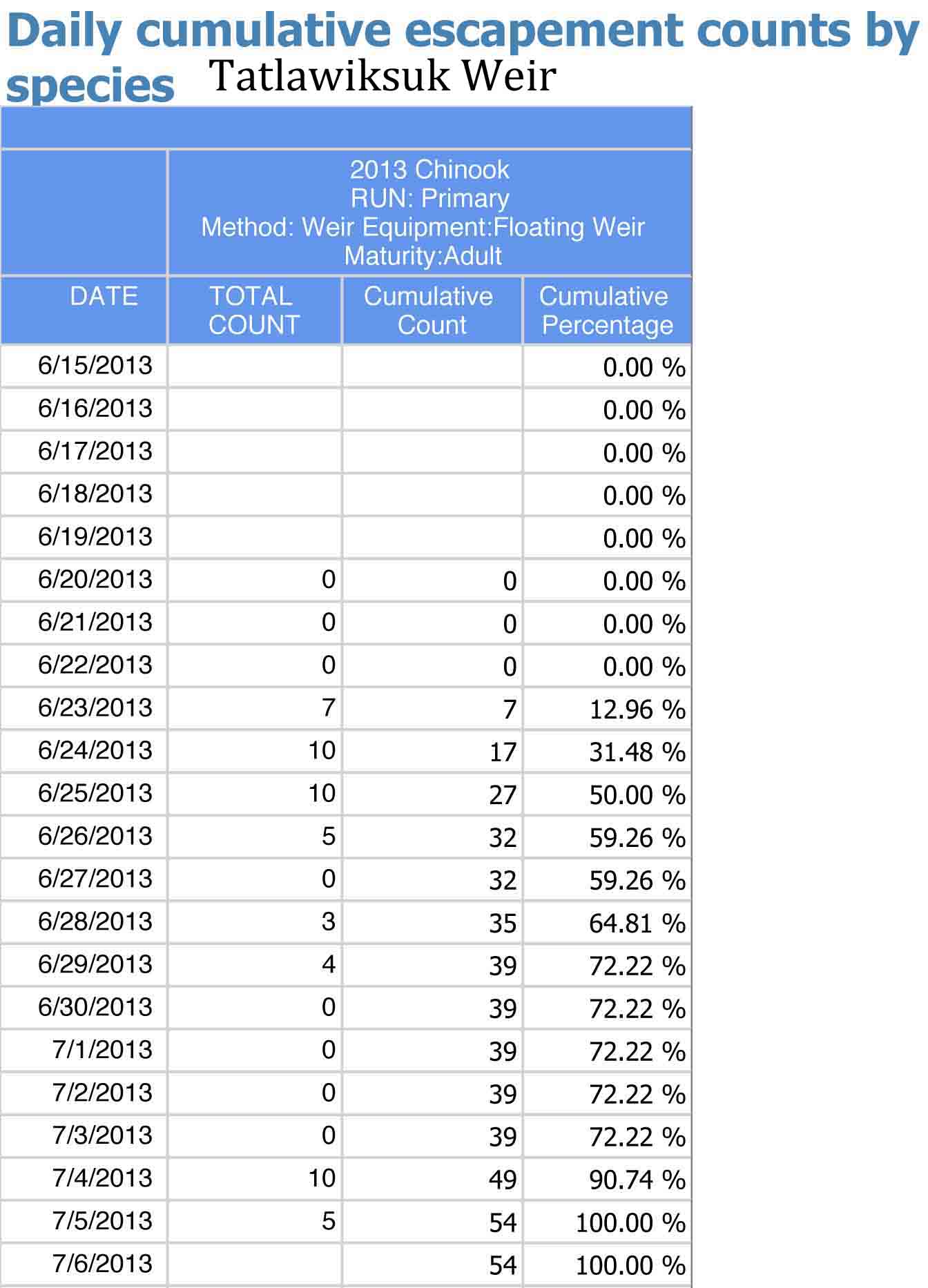 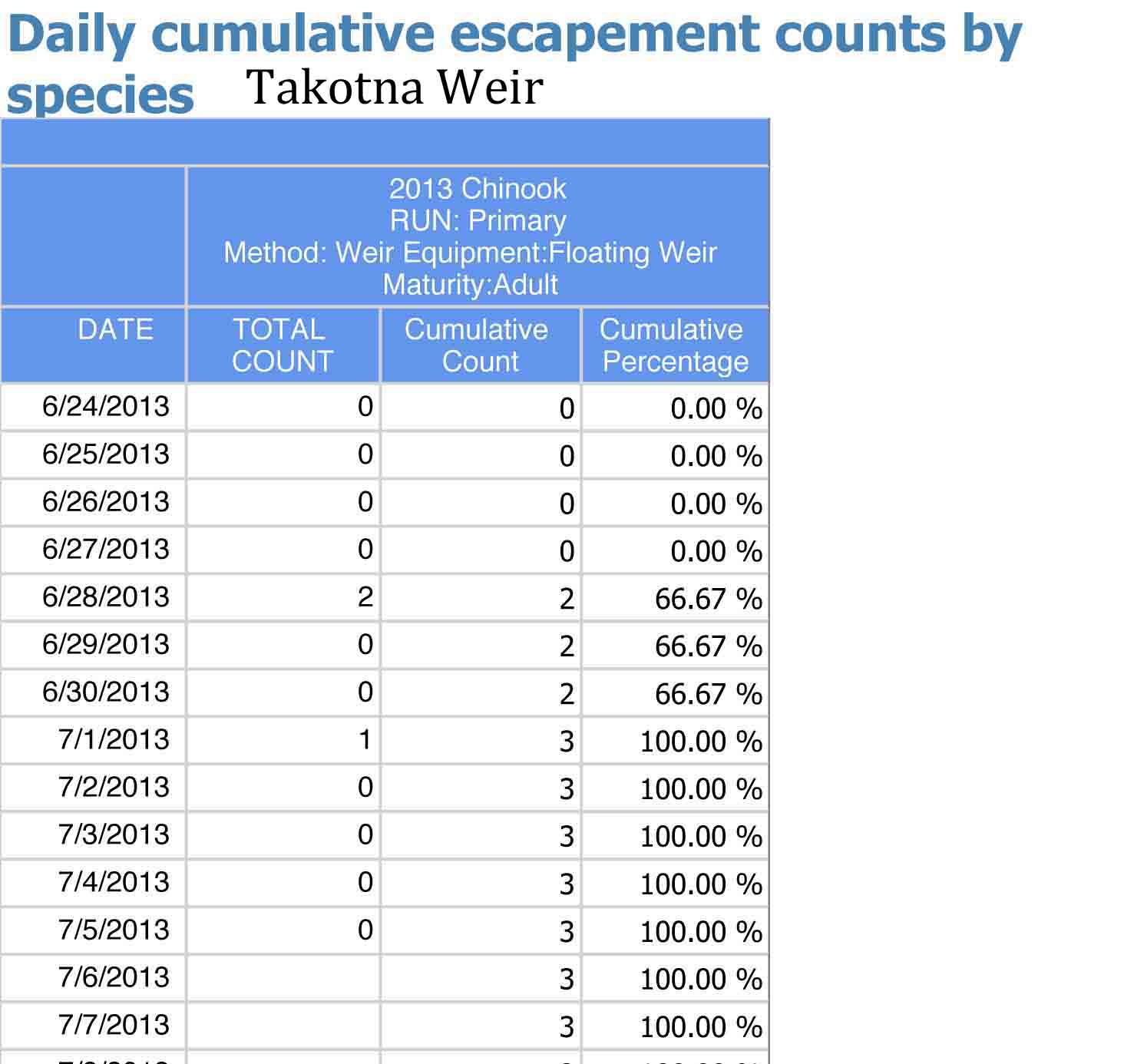 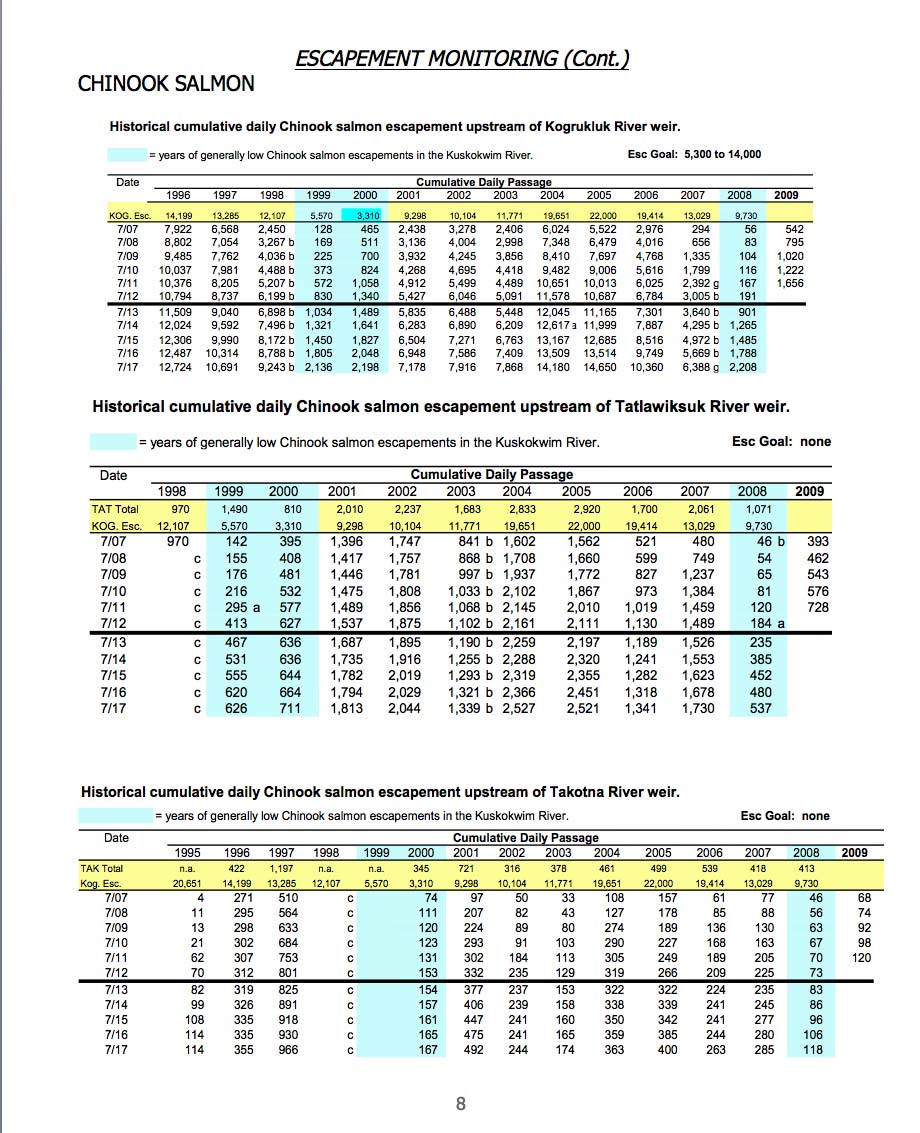 To say that this year’s numbers are low compared to those other years would be a gross understatement; in fact, when numbers are much higher than expected the term often used is “off the charts” – but this year’s weir counts so far are barely on the charts!   Even if the run were late, these numbers indicate one thing – that more kings should have been allowed to pass through the fishery.

Folks – we are in a conservation mode…or we should be; any actions taken in the past week were too little and far too late.

There needs to be some honest and sincere dialogue go on between the management agencies, the fishers and the Working Group even though many fishers were happy with their harvests this year.  We must discuss this dire situation while this information is fresh in our minds and the results are still coming in.  Going into this season everyone said we don’t want to go through what we did in 2012 (i.e., closures and people getting arrested).  Well we didn’t repeat 2012.  But we certainly don’t want to repeat 2013 again..and again and again.  If we do, no one will be happy and there will be long-term consequences, both social and ecological.

Some people are afraid to put their nets in the water now for fear of sinking them with chums; don’t let the plentiful chums detract from the what’s happening before our very eyes with the king salmon.