Doug Molyneaux, retired Kuskokwim Area Research Fisheries Biologist, recently had the following article in the Delta Discovery; he graciously gave us permission to post it here.

It takes fish to make fish. Or, to put it another way, you need to invest a fraction of the salmon run each year for the purpose of spawning if you expect to see a return of good salmon abundance 4, 5, and 6 years from now. This year, we fell well short on that investment. Does this mean that we will definitely see low king returns a few years from now? No, not definitely, it is more a matter of “probability” and in this case the poor escapements this year mean an increased probability of low returns 4, 5, and 6 years from now. With luck, conditions could be perfect and allow for excellent survival in both the freshwater and marine environments, which would result in a decent return of kings a few years down the road. My crystal ball is a foggy, but I see no sign that those perfect conditions are on the horizon.

The shortfall in king escapement occurred at nearly every stream where escapement is monitored. The collection of bar graphs that accompany this article depict the historical level of king escapement in the various streams that are monitored. Some graphs show results from weirs others from aerial surveys. The weir information is generally much more reliable than the single flyby aerial surveys, but both methods tell a very similar story.  In a few cases, when weirs were not operable, an aerial survey was expanded to estimate the escapement in that one stream for that one year. Another bar graph shows estimates of the total annual king salmon escapement to the Kuskokwim River with a very rough unofficial estimate of where 2013 will fall.

For this year, in nearly every case, the number of kings was lowest or near lowest on record. Even more a concern is that some of these streams have been seeing exceptionally low escapements for multiple years. It’s true that ADF&G lowered the escapement goals, but I for one am very anxious to see the results of this experiment.

There is more to the story than just the total number of fish that get to the spawning grounds. You need to have a good mix of males and females, especially those females with all the eggs they carry. Historically, females comprise about a third of the average escapement; however, at times the percentage has only been in the teens. Heaven help Takotna, where the escapement is fewer than 100 kings, if a bear gets any of the precious female kings before they spawn. And what if some high water event occurs this fall that diverts water from where some of those females spawned? Or if flood waters erode a bank upriver of the spawning area causing mud to smother some of the eggs?  The escapement goals do not take number of females into account, yet they have been lowered to such a degree in the Kuskokwim River tributaries that the risk of significant impact from a localized catastrophic events is greatly increased. Why is there no safeguard built into the goals?  Yes, I’m very anxious to see the results of this experiment but I’ll have to be patient because those results will not be seen for a few years.

It may be true that most families only take what they need for subsistence, but there were not enough kings to fill that need this year and too many were harvested. And for next year? It’s not looking promising. Folks need to refocus their subsistence harvest on more abundant chum and coho in 2014 in order to be sure an adequate investment is made in getting kings up to spawn for the next generation of returns– especially those big females with all their eggs. 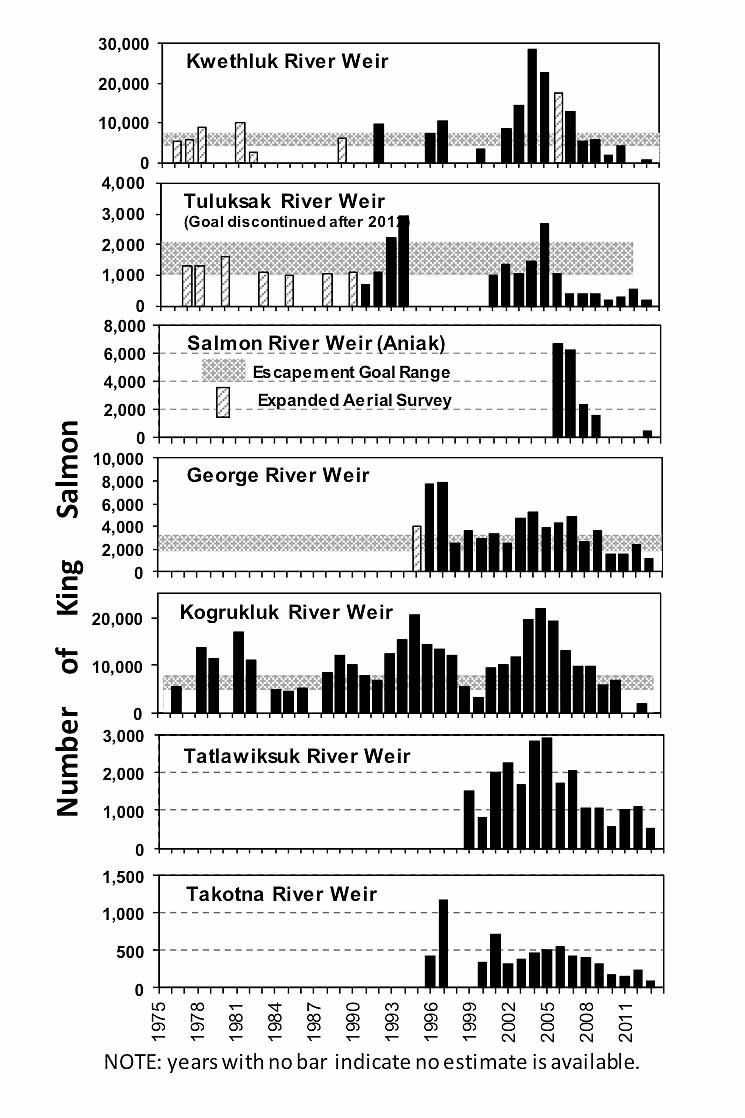 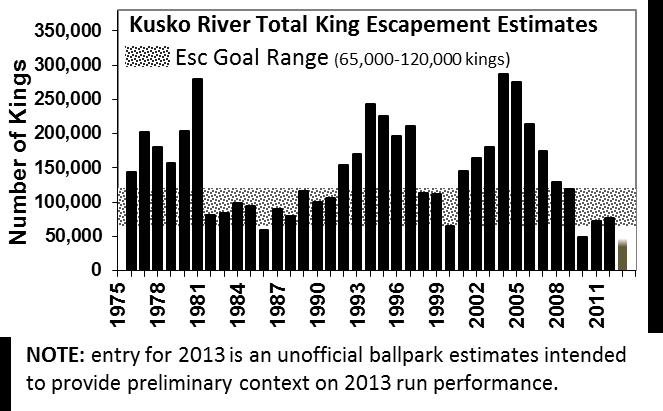