Why the resolutions and why now?

In two of the last four years, the minimum drainagewide escapement goal of 65,000 kings established by the Department of Fish & Game has not been met.  Four years ago in 2010 only 49,000 were estimated to reach the spawning grounds; still approximately 69,000 kings were harvested in the subsistence fishery throughout the drainage.  In 2011 – with fifteen days of restrictions placed on fishers – the goal was barely met; roughly 72,000 escaped the fishermen and made it to the spawning grounds.  Given those fifteen days of restrictions, however, it’s still estimated that approximately 61,000 kings were harvested drainagewide for subsistence.

To put that into perspective, the Kuskokwim River supports the State’s largest king salmon subsistence fishery – even larger than the Yukon.  In an average year, about 80,000 are harvested throughout the scattered villages.  But 2012 was a different story.  The goal of 65,000, although barely met, was attained only through substantial restrictions that lasted 35 days to subsistence fishers.  The actual number is not out yet, but it is likely that it’s only half of the 80,000 normally harvested.

This past season saw a great disparity between the success of subsistence fishers in the lower river who were able to meet their desires for king salmon compared to middle and upriver fishers who struggled significantly to meet their needs…many of whom didn’t (one family made 41 drifts and only caught nine kings).  It’s possible that not only is the escapement for this year the lowest ever seen, it may wind up being only half of the 65,000 minimum goal.

That the people furthest up a river system have a more difficult time catching fish like salmon that migrate past the river’s mouth is not unusual in any inriver fishery; it’s a given.  But the past few years have been particularly burdensome for the middle and upper river villages.

To illustrate that, I’ve compiled the following table that has the king salmon subsistence catch numbers for some select villages representing the lower and middle portions of the Kuskokwim for the years 2009 through 2011.  Although it is possible that the population of some of the upriver villages has dwindled as some residents left the region to relocate to places with better economic opportunities, these numbers should demonstrate the disparity of catches between the various sections of river during years of low returns.

In this data set 2009 was a pretty good year all around – roughly 86,000 kings were harvested for subsistence throughout the entire drainage while approximately 118,000 made it to the spawning grounds.  But note the drastic drop overall in the upper river villages the two following years for their respective 10-year averages, keeping in mind that escapement was not met in 2010 (only 49,000 escaped) and only barely met in 2011.

Data aren’t yet available for 2012 and 2013, but as already mentioned the overall subsistence harvest for 2012 was only half of what it normally is…so everyone struggled to get what they need.  Looking at the table above, it would be safe to say that the upper river villages got the short end of the stick once again the past two seasons – especially this year.

Numerous times during the Kuskokwim Salmon Management Working Group meetings this past summer lower river subsistence fishermen stated how “happy” they were with how successful they’d been at getting the kings that they wanted – and praising ADF&G for not implementing any restrictions like the previous two years…specifically no closures. 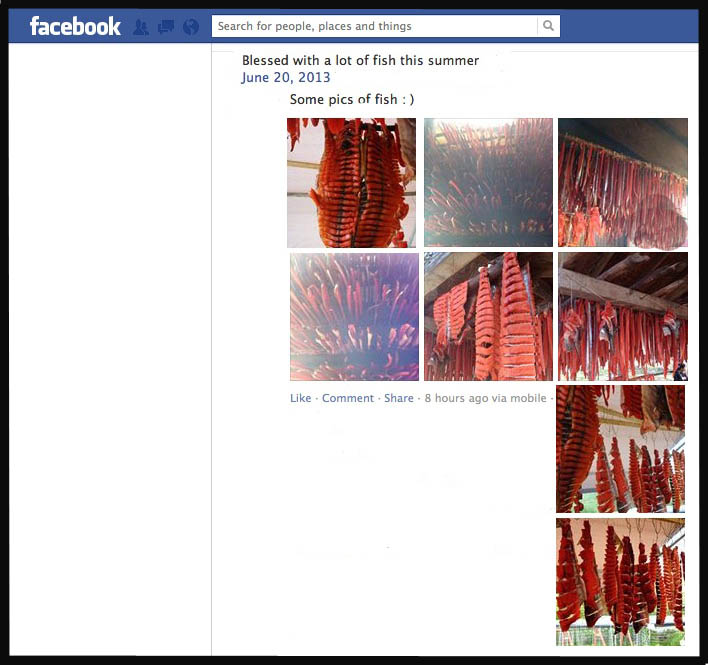 This is a composite (or combination) of two separate Facebook posts showing how well lower river fishers did in 2013. Smokehouses like that would make anyone happy! But alas, there were very few fish racks in the middle and upper river sections that resembled anything like that!

However, during several of those same Working Group meetings, middle and upriver members expressed concern over the lack of fish from Kalskag upriver and urged their family and friends from the lower river to cut back on harvesting kings.

To their credit, there were some people downriver who not only practiced conservation, but also did their best to spread the message that caution was warranted.  As you can see from the photo below, social media was used by some to get the message out to take fewer kings and encourage people to take more chums and reds. 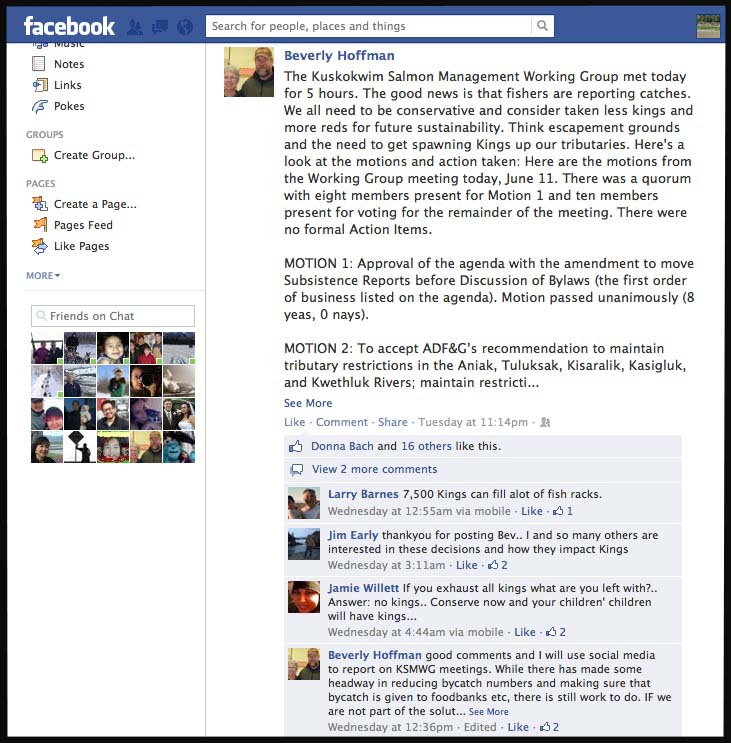 Unfortunately, at the most recent Working Group meeting most everyone agreed that the meager conservation efforts voluntarily exercised was not enough…and neither was the gear size mesh restriction first implemented on June 28th.

To put the blame for the low escapement and difficulty for middle and upper river fishermen to fill their needs primarily on the Working Group would be a gross injustice.  Just prior to the season, the Department of Fish & Game increased their preseason total run forecast to around 200,000, leaving us to believe that the run should twice as large as that of 2012.

That table above should by itself explain why villages in the middle river are frustrated with what has transpired the past few years, and this year being what it’s been has driven them to pass the following resolutions demanding a change in management: 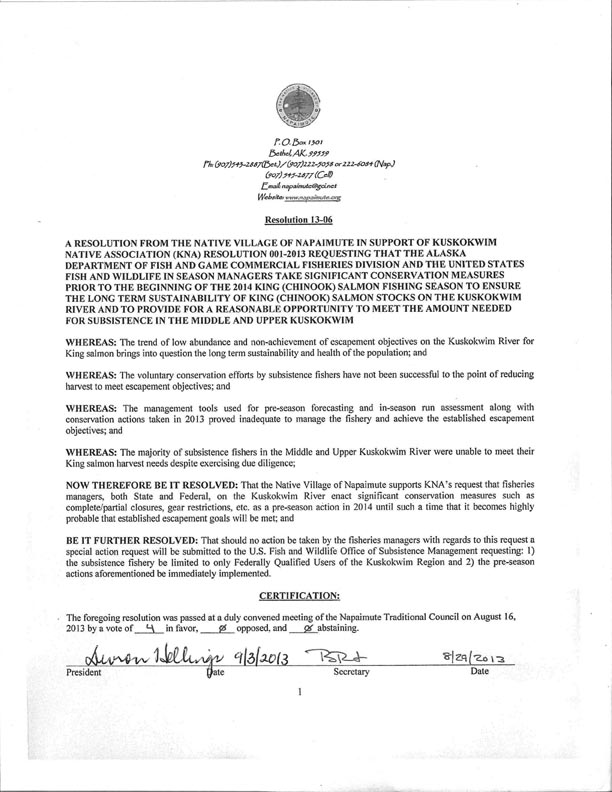 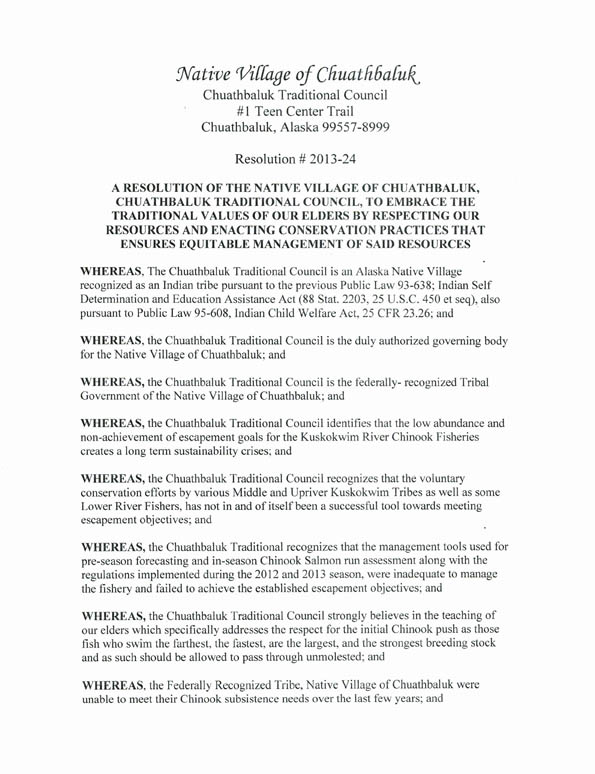 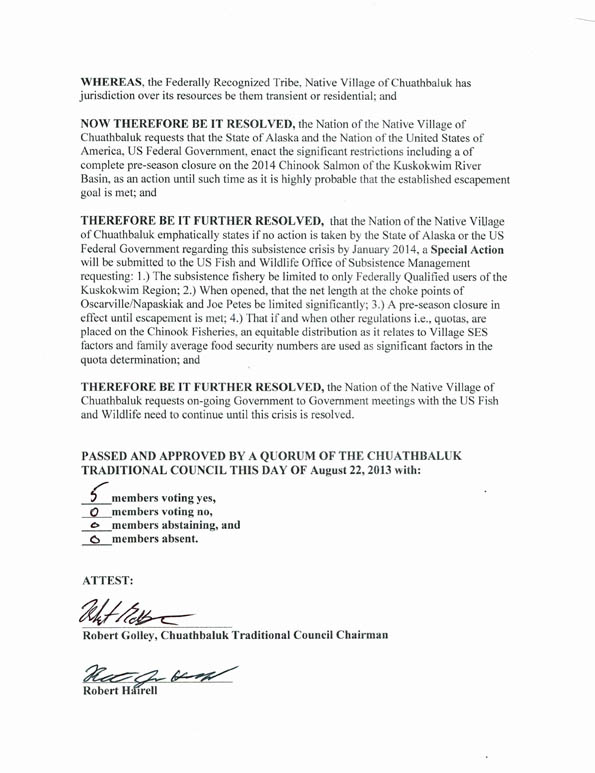 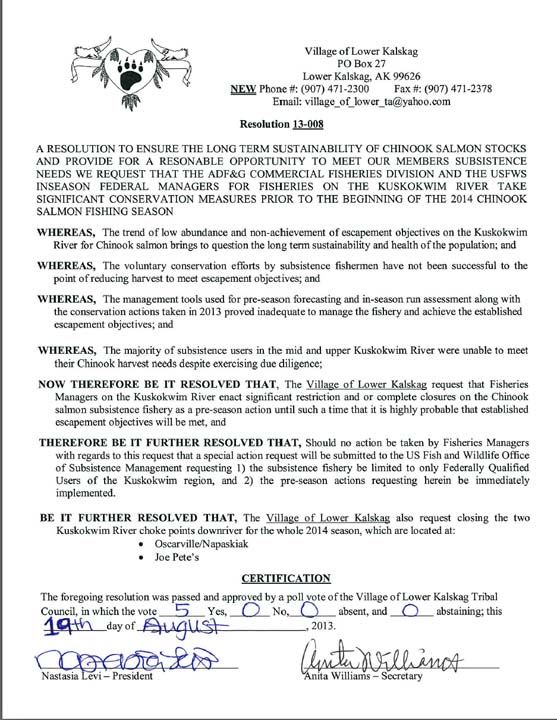 So if someone was to ask…and many have, “How did we get into the bind that we found ourselves in this summer?” – one might conclude that the reliance on computer modeling rife with uncertainties was the major culprit (the 2012 preseason forecast was nearly as imprecise as this year’s).  Over a decade ago one of the past managers told the Working Group that fisheries management is as much an art as it is a science.  Maybe it’s time to get the paintbrushes or sculpture knives out and smooth out some of the uncertainties and, at a minimum, err on the side of conservation for the sake of future generations for this year was only part and parcel of the declining salmon picture.

Here’s a look back at what was, our best guess of what is, and a possible indication of what might be.  I’ve heard it said by more than one person during Working Group meetings that we are heading down the same path as the Yukon River – that is in regards to the upriver fishers seeing a dwindling of their fabled king salmon stocks. 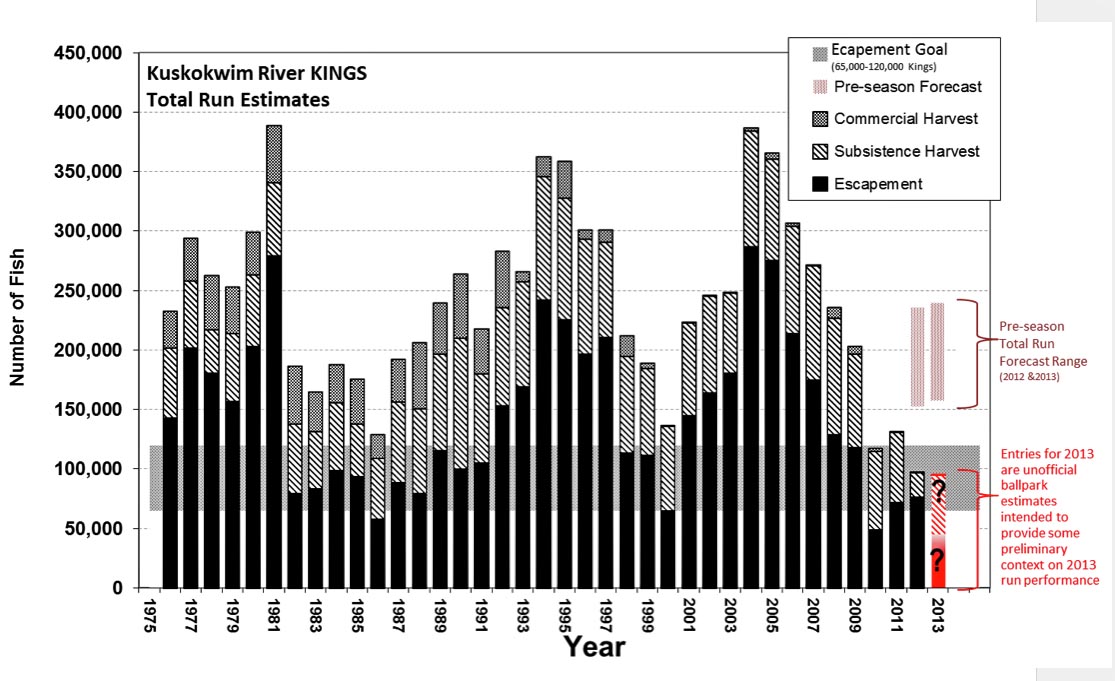 It’s the record breaking numbers for 2010 and 2013 that will be hard to overcome if drastic measures aren’t taken immediately by everyone involved; i.e., down river fishers, middle river fishers, upriver fishers, The Kuskokwim Salmon Management Working Group, the U.S. Fish & Wildlife Service and the Alaska Department of Fish & Game.

It’s unfortunate that managing individual fish species among numerous valuable other species in the same river is so darn difficult, otherwise a full blown moratorium like we’ve seen work so well for moose populations would be in order here.