With all the attention that has been focused on low king salmon runs, it is easy to overlook the good news: chum salmon are doing fine! Yes, king runs have been at or near record lows in recent years, and coho have been in a slump since 1997, but the humble chum salmon is doing fine.

The most solid evidence for just how well chum are doing is from the spawning grounds. Chum escapements are monitored at 7 weir project on tributary streams scattered throughout the Kuskokwim drainage. The oldest of these weirs is on the Kogrukluk River which began in 1976 and is located in the headwaters of the Holitna drainage. The Kogrukluk is the only place in the Kuskokwim drainage with a formal escapement goal for chum, 15,000 to 49,000 fish, and that goal has been achieved or exceeded in 28 of the 33 years of successful operation (5 years had incomplete operations because of flooding).

The other weirs, all begun after 1990, don’t have chum escapement goals; still, with one exception they have all seen escapements near or above average in recent years. The primary exception is Salmon River (Aniak drainage), but this project only has 5 years of operation so it is hard to know what is really “average” for that tributary. The historical annual escapement at each of the seven weirs is shown in the set of bar graphs associated with this article. Years with no bar indicate the weir was either not operated or operation was incomplete.

But weirs alone don’t give a complete picture of the total chum salmon run because the “total run” includes fish harvested in the commercial and subsistence fisheries. It gets tricky trying to illustrate the total chum run because you need to estimate total escapement, and the weirs only account for a fraction of the total escapement. Fortunately, in 2008 there was an effort to do a total run reconstruction for chum salmon (ADF&G Fishery Data Series No. 08-64). Results are very rough, but provide some standardized context to better appreciate just how well chum are doing in the Kuskokwim River. The total run graph associated with this article is a modification of the 2008 report in that it is expanded to include estimates for additional years not covered in the report. As such, the graph should be viewed as a “back of the envelope” effort. Each year shown in the total run graph has a three part stacked bar that includes: total escapement, subsistence harvest, and commercial harvest. When added together (or stacked) they sum to the “total run”.

Commercial harvest has been minimal since the late 1990’s, mostly because of decrease market interest in chum and management efforts to protect kings. Subsistence harvest only accounts for a small fraction of the total chum run, and that fraction has been decreasing, mostly because people are now favoring king and sockeye over chum. Since the early 1990’s, the vast majority of the annual run has been going towards spawning escapement. When you add them all together, the total annual chum run has been average to well above average since 2001. The scale may be less than perfect for the escapement component, still the point stands that the overall annual abundance of chum from 2001 to present has been average to above average.

Why are chum doing so much better than kings and cohos?  I don’t have the definitive answer, but here are a few likely factors:

Stay tuned for details. There are some interesting salmon investigations underway in the nearshore marine environment. These are being conducted jointly by Alaska Fish and Game and the National Marine Fisheries Service. In the meantime, let’s be thankful that chum are doing well. 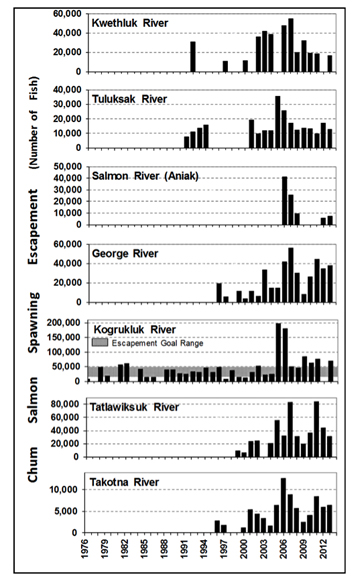 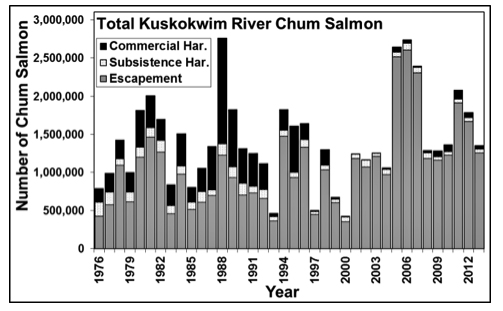