In regards to the Kuskokwim River king salmon run the past few years and the contentious issues that have arisen from declining returns, it’s been an interesting past few years to say the least…if not very frustrating to many of us.  On occasion we’ve experienced restrictions and closures to the subsistence fishery, and in 2012 we saw subsistence fishermen disregard a closure in the name of civil disobedience that led to highly publicized trials for over 20 fishermen.  This year it appears that we had the lowest escapement on record, surpassing 2010 – which at that time held that dubious distinction.

Not only are the king salmon in our backyard in decline, but so are those of the Yukon River drainage and further north in the Norton Sound region.  Fortunately, there is an initiative focused on the causes of the those declines throughout the Arctic-Yukon-Kuskokwim Region and the Bering Sea ecosystem that was established in 2001; it’s known as the AYK Sustainable Salmon Initiative or AYK SSI for short. 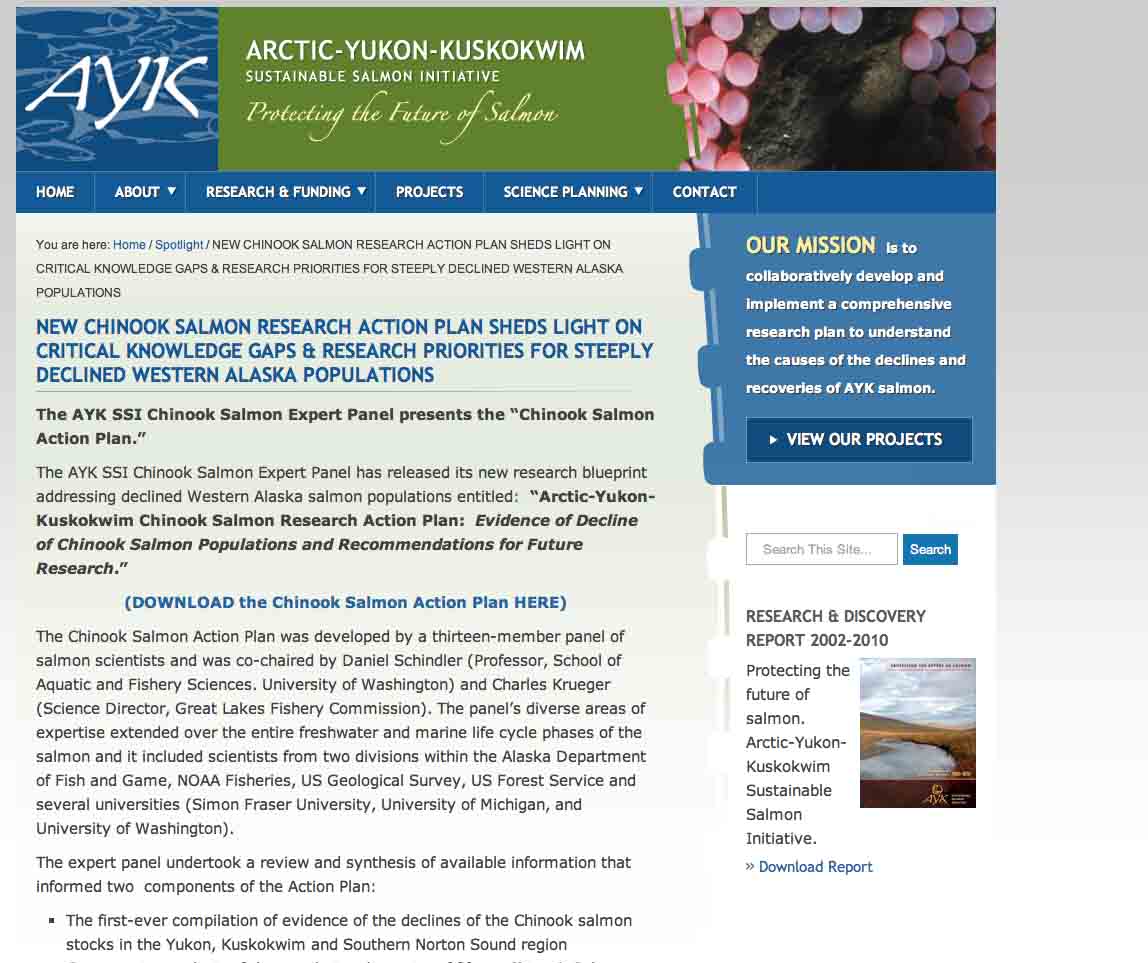 This initiative is a partnership between public and private institutions and state and federal agencies and is the result of king salmon declines over the last decade or more that has resulted in nutritional, cultural and economic hardship for people throughout the region.  The AYK SSI effort is the first comprehensive look at the causes leading to the declines in king salmon stocks in an area that covers 40% of the land area of the State and the waters associated with it.  The initiative, which has an action plan as one of its components, focuses on fifteen separate stocks throughout the region, including the Kuskokwim and Yukon systems and looks at both marine and freshwater environments.

The goal of the action plan is to determine: Which variables and processes are the most likely causative factors of the AYK Chinook salmon declines and to produce a more detailed set of research priorities and questions to better understand the key drivers of salmon abundance in the region. 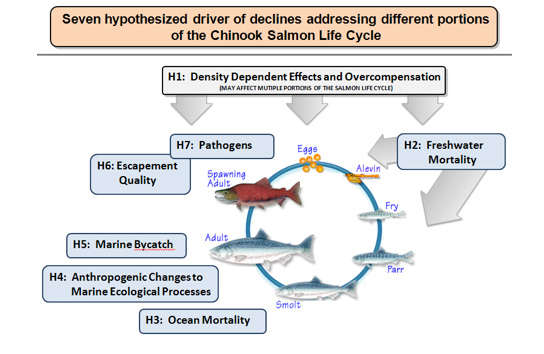 The main deliverable of the plan is, “a set of detailed strategic research priorities aimed at advancing our understanding of the causes of the declines and, in turn, to support the rebuilding and sustainable management of AYK Chinook salmon stocks.

Findings specific to the Kuskokwim conclude that there have been at least three periods of low abundance since records have been kept.  Looking closely at the data, it’s obvious that Chinook abundance has been highly variable over the years.  In some strong years we’ve seen as high as 350,000 return (that includes escapement plus subsistence and commercial harvest), while this year the numbers we more than likely 1/3 of that.

Excluding 1989 and 2000, the research also indicates that the Kuskokwim has been in a relatively low period the past 16 years; our recent downturn seems to have begun six years ago in 2007.  The following quote comes directly from the Research Action Plan: The problem currently facing Kuskokwim River Chinook salmon stocks is that, based on analyses of recruits-per-spawner, observed runs sizes, and escapements, the salmon stocks appear to be in a multi-year period of low productivity and abundance, insufficient to meet necessary escapement levels, and to provide subsistence users with the opportunity to harvest “amounts necessary for subsistence” as established by the Alaska Board of Fisheries.

For much more information pertaining to what’s potentially driving the recent decline, the actual AYK Chinook Salmon Research Action Plan can be found at http://www.aykssi.org/aykssi-chinook-salmon-research-action-plan-2013/

If any of our followers have thoughts on what the main drivers behind the downturns in king numbers are, or any additional information that could shed light on the subject, please don’t hesitate to give us a call.  I can be reached at (907) 676-0012 or E-mail me at dcannonnapaimuteed@earthlink.net.