25th Anniversary of the Blessing of the Caribou – by Mark Leary 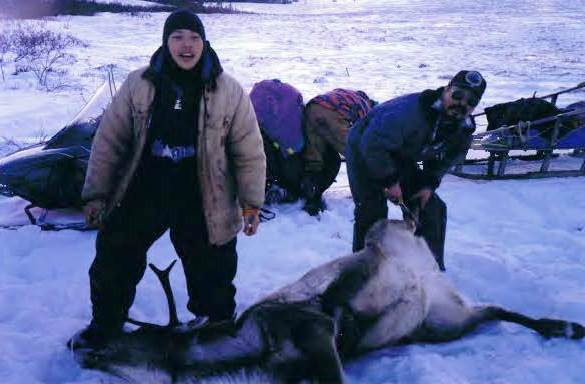 25th Anniversary of the Blessing of the Caribou

Tears were streaming down his face as he knelt beside the dead caribou. He looked up at me and said “I never thought I’d see this in my life”.

They were tears of joy.

The caribou had come back into the country after being gone for nearly a hundred years.

That was Andrew Kameroff from Kalskag, it was November 1988 and he and I were blessed to have been some of the first people to hunt them.

This was different. There were thousands.

I was living in Holy Cross then and flew over to Kalskag for Thanksgiving. In the Aniak airport, people were telling me pilots had been reporting caribou out towards Whitefish Lake. I didn’t think too much about it – a small bunch must have wandered into the country.

When I reached Kalskag – everybody was talking about the caribou. Lots – just outside the tree line, south of the Kuskokwim. By Whitefish Lake! Traveling was just getting good.

I told my uncles “Let’s go!” They said “After Thanksgiving.” Man, I couldn’t wait for that day to be over. The next morning we headed out at first light. Coming out to the tundra near Whitefish Lake it was like a dream: there were small bunches of caribou scattered as far as we could see. We weren’t even sure if it was legal to hunt them (it was) – but we were going hunting!

We didn’t know much about hunting caribou back then. Without even trying to get closer I shot one from a long ways with my Ap’a’s ancient old 308. Upon reaching it I thought to myself “So small these caribou are”. We were used to moose. But still it was very exciting.

On a nearby lake I could see someone kneeling down by a caribou he had just caught. I went over to see who it was and share the excitement. It was Andrew.

In the following years we quickly learned all the different ways to expertly hunt them: whistling to make them stop, waving a white rag to make them come closer, unplugging headlights, staying down wind, using the setting or rising sun, using the creeks and gullies to get closer. Sometimes just waiting and watching, letting them come to us on their own.

We learned to skin them without a knife or even by using a snow machine to pull off their hide.

We learned to climb the hills in August to hunt the big fat bulls that lived alone up high.

In September, thousands of caribou would cross the Alukaq River and beat trails in the soft shale rock cliffs as they climbed up single file. Later these trails would fill up with leaves, making bright yellow stripes against the grey-brown of the rocks. It was a beautiful sight.

We learned to patiently watch them and pick out the barren cow (the old cow that no longer breeds) – the best meat.

We learned that caribou can’t see well at night. One time something spooked a herd that was bedded down for the night. I was sitting on my snow go in the dark on a nearby ridge. They came stampeding toward me and would have run right into me if I hadn’t started my machine. They swerved from the light then just stopped and stood there not sure what to do. Years later I experienced this again one night in the River above Chuathbaluk.

We learned to wait for them in the main Kuskokwim near Napaimute right before freeze up during the few years that they crossed there. No big rifle needed. As they swam, we’d pick out a good one and put a .22 in its ear. No suffering. No wasted meat. We later learned that we’re not supposed to hunt them like this – against the game regulations. But up North the People do hunt them legally like this. I think they worked within the regulatory process to get the law changed to make it allowable for them.

And a caribou can’t sink. In fact, they float like a cork with all that good air-filled hair. And with those curved hooves, they can swim like a fish.

We learned that their hide is almost as valuable as their meat. Stretched and dried they make the warmest curuq (sleeping mat). All of my kids grew up sleeping on caribou skins whenever we were out.

We learned to look for the caribou right after freeze up around the lakes and creeks just outside the tree line. This is the time they like to eat the grass – before the snow covers it up.

The rest of the winter they could be found scattered widely across the tundra in small bunches in areas where the snow is less eating the white moss. 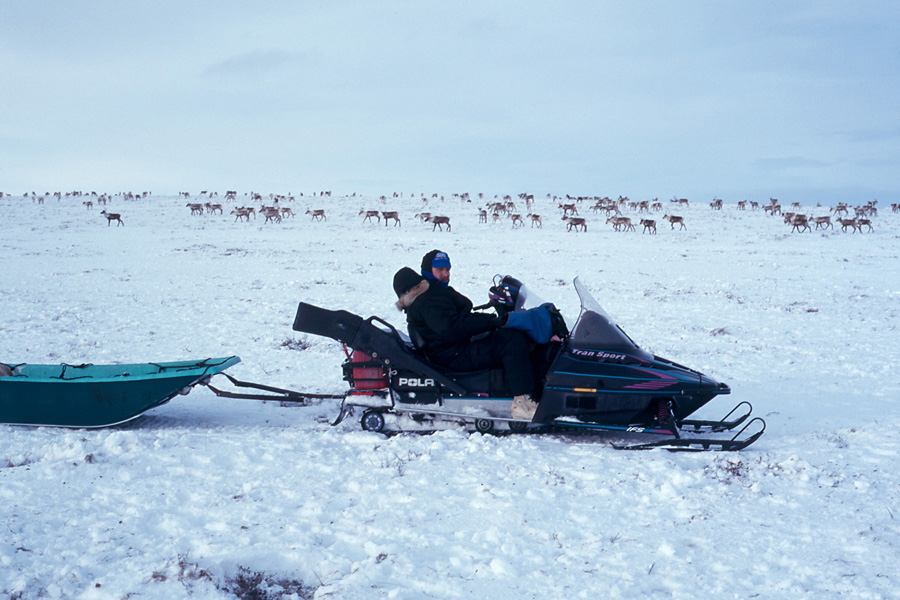 Ross Boring hunting caribou near Three-Step Mt. out of Kwethluk.

In the spring they move back into the high country for calving and to spend the summer away from the bugs.

We learned about all of the other life the caribou brought with them: wolves, wolverines, coyotes, foxes, hawks, eagles, owls, magpies to name a few.

In high school Gookie, Bobby, and I used to trap in the flats south of Tupukunuk Slough between Kwethluk and Napaskiak. Foxes mostly. Beaver and mink too. Once in a while we’d climb up on the high tundra and look across to the Kilbuck Mountains. But there wasn’t much out there in that open stretch all those long ago winter days: maybe some ptarmigan and a few more foxes so we’d turn and go back down to the tree line.

I would have never believed then that over 30 years later Took and I would sneak across the River right after freeze up and catch caribou right there in that same area with the YKHC office building breaking the skyline to the north.

We also learned to take time to just sit and watch the caribou and appreciate the blessings they brought to the land and the People.

Once I sat on my snow machine in the grass at Teqikaq along the eastern shore of Whitefish Lake with 4,000 caribou milling all around completely unafraid. My middle daughter, Audrey, stood up on the seat in front of me in awe. I guess I was too – to be surrounded by so much life.

Another late fall day on the low foothills below Napaimute I sat with my back against the roots of a blown over tree while countless caribou passed all around me. I tried counting them for a bit but lost track after 300 something as their trickle became a flood. Every once in awhile I would reach out and touch one as it walked by. That’s how close they were. Boy they would get surprised – eyes bulging, jumping away. 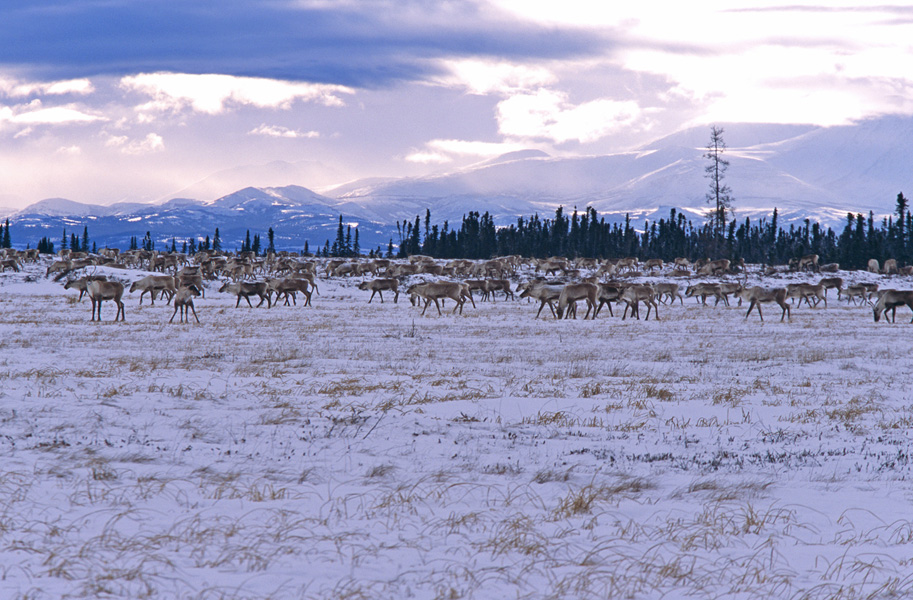 Band of caribou near Whitefish Lake around 2004

As the years went by the caribou quickly became an important, accepted part of life for the People of the Middle and Lower Kuskokwim. Now 25 years later a whole generation has grown up with the caribou. They don’t know what it was like before the caribou came back. I guess deep down I always felt like they were just here on an extended visit – that they would be gone again someday.

And sadly as the caribou became an accepted part of our life, some also began to take them for granted through waste and disrespect.

One midwinter day I met a friend on the trail above Chuathbaluk. We stopped to visit. He was out looking for wolves. As we talked and drank coffee, a cow and calf caribou came out across the River. They wandered around on the ice for few minutes then went back in the way they came. My friend commented “Those things are so dumb. They’re like mice to me.” I told him “Gee, you shouldn’t talk like that. Remember when there was no caribou? Now look at all the life they brought with them. Like the wolves you’re looking for today. Someday those caribou are going to be gone again and we’ll tell stories to our grand children about how good it was when the caribou were here.”

Now it’s coming true – caribou are pretty much gone from the Middle Kuskokwim. And the ones in the Lower River are in great decline.

Parts and pieces of caribou also started showing up in dumps – parts and pieces that were still good to eat. I once saw a whole caribou in the dump. This was during the very time we were taking groups of kids out on cultural heritage hunting trips. Trying to teach them not only how to be good hunters, but also how to properly take care of what they catch, and to always share it – especially to Elders. I took that caribou away from the dump and put it away.

Later when I moved down to Bethel I went hunting with a group of guys from a nearby village. We had to travel far that day to find the caribou – over near the Fog River. The daylight was almost done when we finally caught them. I started cutting one up the regular way. The others were loading whole caribou into their sleds. I thought to myself “Well some people do that – bring them back whole and cut them up at home. But they should take the guts out. We have a long ride home.”

Finally I asked one of them “How come you don’t take the guts out? We won’t get home for 4 or 5 hours. They’ll be all swelled up.”

Later right before we started heading back I asked again. One of them quietly said, “These are for our dogs”. They were all dog mushers.

“If I knew that I wouldn’t have gone with you guys” was my reply.

These caribou might be gone again someday. We need to treasure and respect them while they’re still here.

But even if they do go away, their mark – the trees in the tundra with the rubbed off branches, the bleached antlers sticking up from the moss, and their trails beaten into the hillsides by thousands of hooves will long remain as a reminder of…

…the blessing of the caribou.