Is Science At Times A Salmon’s Worst Enemy? Part 1

Here is a timely article concerning the downturn of Chinook salmon abundance in the Yukon River.   http://www.alaskajournal.com/Alaska-Journal-of-Commerce/November-Issue-4-2013/An-in-river-look-at-what-has-become-of-the-Yukon-kings/

Somewhat surprisingly, this article closes with a discussion on the poor showing of the Kuskokwim kings the past two years.

While shrinking fish size is seen by fisheries biologists everywhere as a hallmark of a fish stock in peril, evidence of it in the Yukon River did not seem to overly concern the department of Fish and Game or the fisheries associations that advocate for commercial fishing interests or the lower river fishermen.

As late as 2006, according to newspaper accounts, ADFG’s management supervisor for the Yukon River, Dan Bergstrom, saw no particular urgency regarding reports of declining fish size: “We don’t see a crisis at this point.”

At the same time, the Yukon River Drainage Fishermen’s Association stated it would resist any new regulations regarding mesh size restrictions. The organization is a 501(c)3 nonprofit established in 1990 made up of subsistence and commercial fishers with a mission of protecting and promoting all healthy fisheries and cultures along the Yukon River drainage,” according to its website. Mesh size restrictions were also opposed in 2010 by the Association of Village Council Presidents, which represents dozens of villages in the Yukon-Kuskokwim delta.

Thirty years earlier, the agency and other stakeholders had been served notice that large-mesh nets threatened the Yukon kings. Writing in 1976, C.E. Walker, a senior biologist with Canada’s Fisheries and Marine Service, warned that “greater use of gillnets and those of large mesh size, six inches or greater, may result in significantly greater exploitation of female fish.”……………………

……..It took a decade of agitation and data, but by 2009 the Yukon River Drainage Fisheries Association finally and formally agreed with Stan Zuray and other upriver fishermen that the king salmon were shrinking and the run was in serious trouble.

By 2011, even the Alaska Department of Fish and Game’s John Linderman, who succeeded Sandone, acknowledged that the decline in the Yukon’s older, larger king salmon had “been shown fairly conclusively by a multitude of different projects.”

When asked why the department was so late coming to this realization, Linderman cites a disinclination to restrict fishermen’s economic and subsistence needs “until it became very, very abundantly clear that action was absolutely necessary.”

It’s this last sentence that has caused so many fish populations to go down the toilet.

In my natural resource career I’ve heard the following statement more than I can count, “If we’re going to err we should err on the side of conservation”.  But the reality is, that well-intentioned tactic is nearly impossible to implement politically.  Just think back the past few years in the Kuskokwim – the bulk of fishers vehemently fought restrictions?  And when restrictions were imposed, many still went out and fished anyway.

I’ve got to conclude that if salmon could talk they’d likely be saying that what’s depicted in this article is a classic example of science being their own worst enemy…with politics being no friend either!

In a followup post (Part 2), we’ll take a more in-depth look at the Kuskokwim situation by taking a critical look at very similar circumstances and frustrations expressed by residents who fear that the Kuskokwim is heading down the very same path as the Yukon. 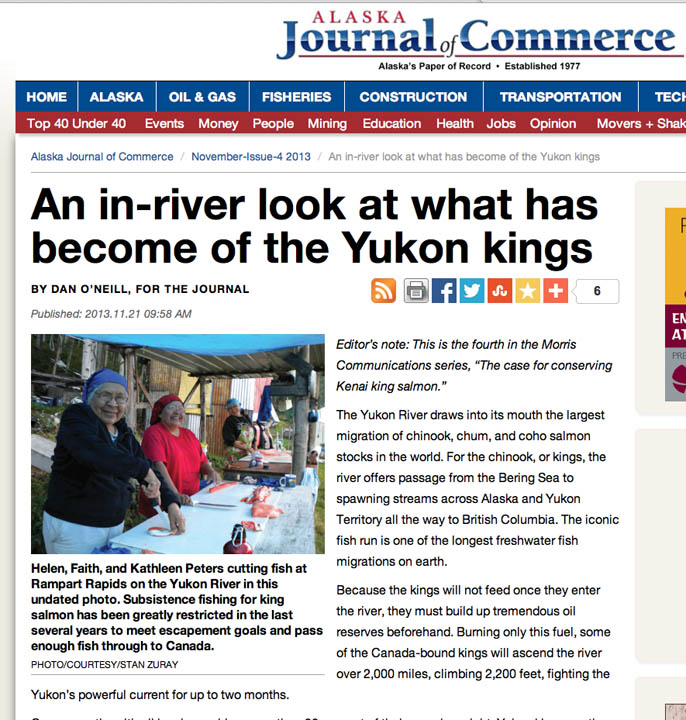