Is Science At Times A Salmon’s Worst Enemy? Part 2

This is part two of Is Science Our Salmon’s Worst Enemy? – Part 1 was posted on November 30, and referenced an article in the Alaska Journal of Commerce titled An in-river look at what has become of the Yukon kings.  It’s highly recommended that you eventually read that article:  http://www.alaskajournal.com/Alaska-Journal-of-Commerce/November-Issue-4-2013/An-in-river-look-at-what-has-become-of-the-Yukon-kings/

In Part 2 we’ll be looking specifically at the Kuskokwim and the uncertainties involved in fisheries management and political pressures, particularly pertaining to this past summer’s subsistence fishing season.

Here’s a brief recap from this past season – a high proportion of fishers in the lower river were very pleased with how the season went (basically people there caught what they needed or wanted).  However, as one moved upstream, fishing became more difficult with a majority of middle and upriver fishers drastically cutting back on their king salmon harvest…either voluntarily or because the fish just weren’t there.

And lastly, the results of escapement, or fish on the spawning grounds, was a management disaster.  Basically, the preliminary escapement numbers were the lowest on record – the second time that’s occurred in three years.  The minimum bound of the current escapement goal range set by ADF&G is 65,000 kings spawning throughout the entire Kuskokwim drainage, but it’s very possible that this past summer fewer than 30,000 king salmon made it to the spawning grounds of Alaska’s second largest river system.

To put that into some context, about 80,000 kings on average are harvest each year in the subsistence fishery.  So only 30,000 made it back to spawn.  But something else to think about to put that in an even more pertinent context – males usually outnumber the females by 3 to 1 or more.  Let’s look at the Takotna River, which granted – does have the fewest salmon returning to any river with a weir.  Preliminary estimates have only about 100 kings returning there, and of that maybe 30 were females.  That’s pretty disconcerting.

Now that the numbers are being finalized, it’s obvious that something went terribly awry this summer.  Here are some verbatim statements from the Kuskokwim Area Manager, Travis Elison, given to those in attendance at the ONC community public hearing on on November 12. (I have placed an emphasis on what I think to be particularly important.)

I’m Travis Elison.  I work for the Department of Fish and Game. I’m the Kuskokwim  Area management biologist for Commercial Fisheries Division. First, I’m really just here to listen. This is what I think about everyday is what are we going to do next year.  And I’d like to apologize for the way 2013 turned out.  I actually never received so many thank yous as a fisheries manager as I did this past summer and we’re still getting those thank yous. Those thank yous were because we let people fish but when we look at the results of escapement I failed miserably in my job last summer. I apologize for that. [Again – the escapement was the lowest on record, possibly below 30,000 or only half of the desired lower bound]

But something I want people to think about after seeing the vast majority of people in this room looking for a window of opportunity to harvest king salmon – that would mean a unrestricted eight inch mesh gear.. . something I’ve been working on a lot real lately is trying to understand the harvest power of the subsistence fishing fleet we have on the Kuskokwim River.  And there’s a couple ways to think about it.  I haven’t figured out the exact harvest power; it’s really difficult to get at just because the way subsistence fishing is occurred here and the way it’s reported.

But we can look at some different things and think about anecdotally, if you think about going out fishing say around June 15th for two hours ask yourself maybe just even last year on a poor year how many king salmon did you catch in two hours when you’re out there fishing for king salmon. Okay.  That’s one person, one boat.  Well the best I can tell from our subsistence harvest, post-season subsistence surveys we have about 2,000 fishing households just in the lower Kuskokwim River, about 2,500 for the entire drainage (compared to only 500 in the middle and upper sections).  So you think about how many king salmon can you catch in two hours multiply that by 2,500 and that’s about the number you can expect we’d harvest in a two-hour commercial period when we’re fishing for king salmon.

Something else I’ve looked at to try to get an understanding of the harvest power is old commercial fishing data back when we had commercial fishing in June during the time when chum or when Chinook are there.  Looking at mostly periods in the late 80’s, many of them stick out where we had approximately 600 permits so 600 boats in District 1, fished for six hours with six inch mesh nets mind you, six inch mesh net not even king gear, a single harvest of 19,000 in six hours. We had one year where we harvested 40,000 in three commercial periods.  So the harvest power of this subsistence fleet is enormous.  That’s something we need to think about.

I definitely don’t want to single Travis out, and I must honestly admit that if I were in his shoes, knowing the pressure of the political realities and the uncertainty involved with fisheries management, I may not have done anything different.  If that were the case, then yes, I would have failed miserably too.

The reason I say that is what was mentioned in the post from a few days ago (i.e., Part 1) – that no matter however well intentioned it is to want to err on the side of conservation, that lofty goal is nearly impossible to actually attain when you consider people’s wants and desires…and psychology.

Let’s take a look graphically at what the past few years’ harvest and escapement levels turned out to be (graph provided by Doug Molyneaux). 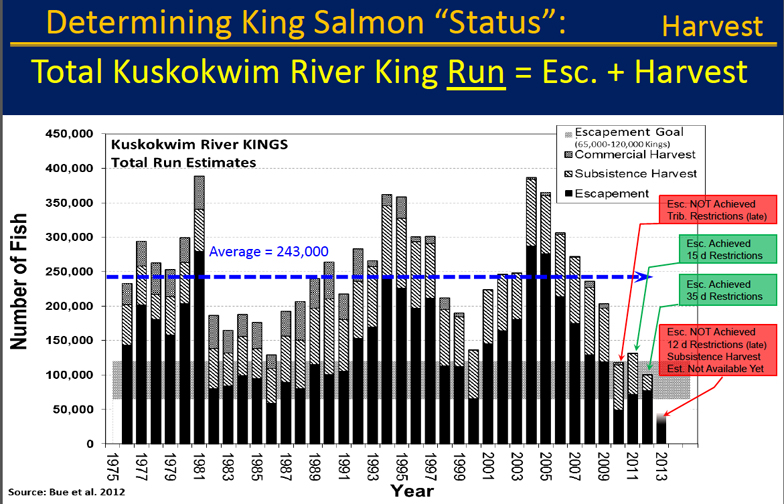 Note how there have been ups and downs since the mid 70’s, where weak years have followed strong years.  If those cycles were to continue, then we’re due for an upswing…right?  We all hope so, but there may be a hidden long-term downward trend….and only time will tell.  As mentioned, though, the two lowest escapements on record over the past three years is very troubling.

But, knowing what we now know about this past summer, will we collectively as managers and fishers fail miserably to learn from the dismal showing of kings to the spawning grounds by not making the tough decisions come next season?  We must move onward acknowledging our mistakes but move forward on a much different path…and that will mean honest to goodness sacrifices.

Without getting into too much psychobabble, Harvard researcher and behavioral scientist, Max Bazerman, breaks it down very simply when he says: “When I look I see common human behaviors repeated across a wide array of issues from financial decisions, to public policy decisions, to environmental decisions.  There is a set of cognitive biases that seem to grab hold of the decisions and determine an outcome that is frequently not in the best long-term interest.  Cognitive issues are, at least, a partial explanation for why we say one thing but do another.”   (like wanting to err on the side of conservation or having escapement be the number one priority!)

Three such biases he’s studied include: positive illusions, i.e., believing that things aren’t as bad as they really are (or misguided optimism); discounting the future, i.e., today’s reality is more urgent than a potential future conundrum, and a desire to maintain the status quo.  Very few humans relish change and we can see that here in the Kuskokwim!  If we don’t address these biases and break the status quo, there won’t be enough king salmon to go around for our kids and our grandkids…certainly not as far out as seven generations.

Bazerman is not the only one who sees it that way, however.  Bob Lackey*, someone who has long been immersed in the issues pertaining to the drastic declines of the salmon of the Pacific Northwest, has this to say, “Salmon experts continue to study and debate what proportion of the decline in wild salmon is attributable to which factor.  Having participated in many multi-organizational salmon science and policy meetings, I have observed that many affected organizations have developed, or funded the development of, sophisticated assessments of salmon populations that usually end up — probably not surprisingly — supporting their organization’s favored policy preference (lowered escapement goals could arguably fall into this category).  No one, not even the most astute salmon scientist, knows for sure the relative importance of the various factors that caused the decline of wild salmon and therefore scientific debate is to be expected. Debate over scientific issues, however, often reflects clashing ethical attitudes, personal beliefs, and policy preferences.”

It’s one thing to get biologists (and the Board of Fish) to agree on whether or not there is a conservation concern, but add the local fishers into the mix who often strongly disagree with the Department of Fish & Game or Fish & Wildlife Service.  Considering how Travis said that there are over 2,500 subsistence fishers throughout the drainage that collectively combine to give the subsistence fishery “enormous harvest power“, it’s not going to do the kings any good if 25 percent of the fishermen err on the side of conservation if the remainder take what they feel they have a right to take…and are encouraged to do so by organizations like AVCP or local village councils.

So science and politics are working against the salmon of the Kuskokwim River.  To reiterate what the AYK Regional Manager, John Linderman, said in the Alaska Journal of Commerce article when asked why the department was hesitant to enact adequate restrictions for the Yukon River king fishery when many upriver fishers had been sounding the alarm over fewer and smaller fish for years, he noted a reluctance to restrict fishermen’s economic and subsistence needs “until it became very, very abundantly clear that action was absolutely necessary.”

Unfortunately, given all the uncertainties in fisheries management and nature and biological systems, very few things are ever abundantly clear.  And that is why we must all walk the walk when it comes to claiming that we want to err on the side of conservation and that escapement is the highest priority.  Lets not let inadequate science and politics take the king salmon away from us in the near term or future generations.