We Know The 2013 Kuskokwim King Salmon Escapement Was The Lowest On Record – But How Low Was It?

The 2013 king salmon escapement was record breaking…unfortunately, it wasn’t in a good way.

The Kuskokwim Salmon Management Working Group (WG) met yesterday (the 17th of December) and the information provided by the Department of Fish & Game* validated what many middle and upper river fishers were saying during the many WG meetings; that the kings just weren’t there.

Although the graphs below may be hard to see, you can get the gist of how low the escapement was by looking at the red lines below.  That red line depicts last summer’s escapement returns for the various weir projects throughout the Kuskokwim.  Although weirs do provide the most accurate information available in regards to how many kings make it back to spawn in a given system, aerial surveys are also conducted throughout the drainage; some on streams with with weirs (e.g., Tuluksak and Salmon), and others without. 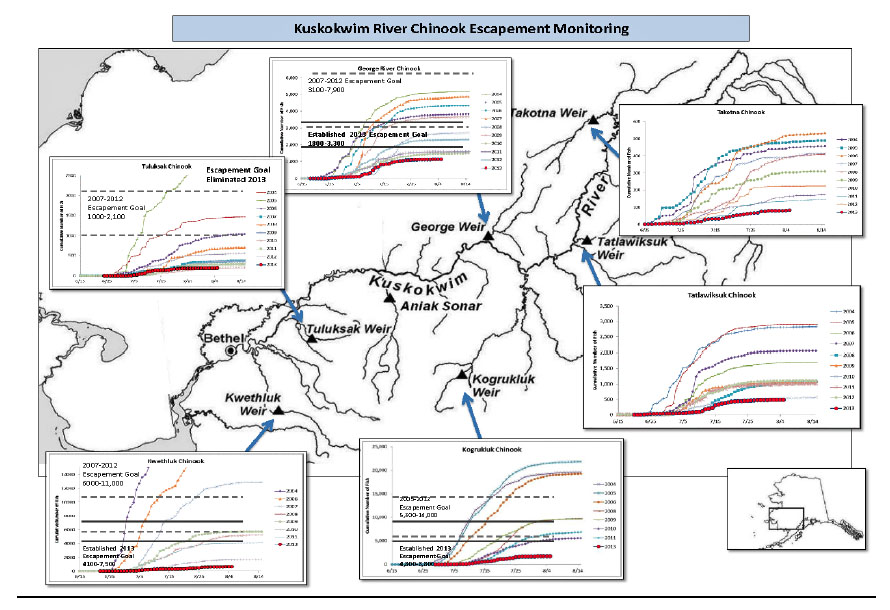 Aerial counts may not count every fish in the river, but they do provide a pretty good index when river and weather conditions permit (i.e., clear water and good flying weather) that can further indicate what the run strength is like.  During an aerial survey, the same sections of river are flown each year and as close to the peak spawning period as possible – that’s how comparison’s from year to year can be done. 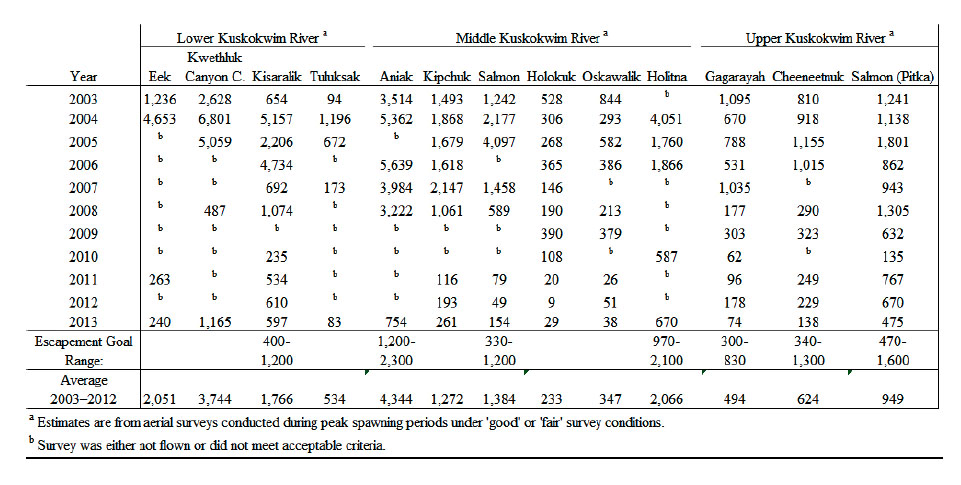 Like the weir counts, many of the aerial results were the lowest ever recorded.  Of special note to us in Napaimute would be the Holokuk River number – this past summer only 29 king salmon were seen from the plane.  One could only venture to guess how many of those were females?  Although not the lowest ever recorded (last year 9 were observed), the trend over the past few years is way down, which is very disconcerting.  Other nearby streams were just as poor – the Aniak had 754, the Salmon 154 and the Oskawalik had only 38.

One of the reasons I bring up aerial counts is because time and again people at various public meetings continually bring up their concerns for jet boats and sport fishing, stating that those are the reasons the numbers are dropping.  It would be hard to deny that when only a handful of kings make it up the Holokuk like the last few years, fishing – even if it is catch and release – can be detrimental to the population and we’re hoping that sport fishing for kings this next season will not be allowed either in the Holokuk itself or where it enters the Kuskokwim.

But I wanted to point out the numbers from streams like the Gagarayah and Cheeneetmuk, which see absolutely no jet boats or fishermen, their numbers are just as bad as rivers with lots of fishermen and boat traffic; they had 74 and 138 respectively.  Other streams like the Eek see virtually no sport fishing pressure or jet boat traffic, yet its count of 240 was the lowest on record.

So there is definitely something bigger going on, especially when you consider that the low king salmon showing stretches from up near Unalakleet all the way down through the Kenai River and even into the southeastern portion of the state.

What can we do then here in the Kuskokwim to help our situation and increase escapement?  For starters, we must conserve where we can.  We must be aware of how dire the situation is and pass that concern on to our neighbors.  We must realize that there will likely be very significant regulations not much different than in 2012…and maybe even more so.  We also must support those measures and demonstrate that everyone must do their part.

Everyone throughout the Kuskokwim must realize the fishing power exerted by the subsistence fishery where approximately 2,500 households are putting up fish, many of which are using large mesh gear.  It was pointed out during the WG meeting that in days of old – 20 years ago – when commercial fishing was allowed in mid June in one 6-hour period over 16,000 kings were caught by 630 boats…just one 6-hour period!  That was in June of 1990 and no gear over 6-inches was allowed; that shows that gear restrictions alone are not the answer to our king salmon predicament.

We don’t know the number yet for last year’s total king salmon run size, but it likely was only around 90,000 to 100,000 – with the vast majority going to subsistence fishermen…and mostly the lower river fishers because on average, the villages from Tuntutuliak to Tuluksak take over 80% of the subsistence catch.

To put this all in perspective – maybe only 30,000 kings made it to the spawning grounds throughout the entire Kuskokwim last year when the minimum escapement goal is 65,000.  So in just a few days of 1/4 of the households up and down the river out there fishing, the amount of  kings that made it back to spawn last year could be snuffed out!

Please conserve this coming year and support any regulations that will get as many kings to the spawning grounds as possible.

* – Numbers are preliminary; the Department of Fish and Game is finalizing harvest estimates and enumeration project counts.