Here’s an article to supports Doug Molyneaux’s contention that things are going on in the ocean that aren’t favorable for king salmon.

Of special note are some excepts; and of special note is that different stocks face different challenges so as you read this article things discussed about the Southeast kings may not necessarily apply here in the Kuskokwim or Yukon – it’s a great article none-the-less:

“chinook salmon are different from the other salmon species. For instance, they tend to prefer colder, deeper waters than the other four salmon species, and they’re more long-lived. So that takes them to different parts of the ocean.”

Kings are also primarily fish-eaters, while the other four species of salmon feed on invertebrates. Like the coho, for instance, which migrates far into the Gulf of Alaska to prey on squid.

“chinook salmon are an entirely different beast than the other salmon. They like their protein (and therefore) are piscivorous, meaning they feed on fish, much more so than other species. Even the small chinook, they feed on fish prey very early in their life. In Southeast they’ll feed on invertebrate prey and fish prey, when available. In the northern Bering [Sea], there’s not a lot of invertebrate prey. Instead they’re feeding on the larval fish. That holds true for most of their life.”

While researchers may not know the exact forces and factors contributing to the decline in both abundance and size of Alaska’s king salmon, one this is for sure: The stocks that swim in the Gulf of Alaska and those that swim in the Bering Sea don’t face exactly the same challenges.

“It depends on the stock group and the factors they get exposed to,” Orsi said.

When it comes to the historic size of kings on the Yukon, most accounts will share the same story — they were prolific and huge. But Murphy, like Orsi, points out the long-term and highly effective use of gillnets, which have been widely used on the lower Yukon, to harvest the largest fish. Others in the state have said the problem was further compounded by the widespread use of drift nets, beginning in the 1970s, as a likely factor that contributed to the decline in king runs.

“There’s no doubt (gillnets) had a culling effect by removing the large females and males from the population for many years,” Orsi said. “And (the Yukon) stock may have lost that large size component because of it.”

The article in its entirety can be found at: http://www.alaskajournal.com/Alaska-Journal-of-Commerce/December-Issue-5-2013/A-king-without-a-crown-Chinook-vulnerable-to-ocean-forces/ 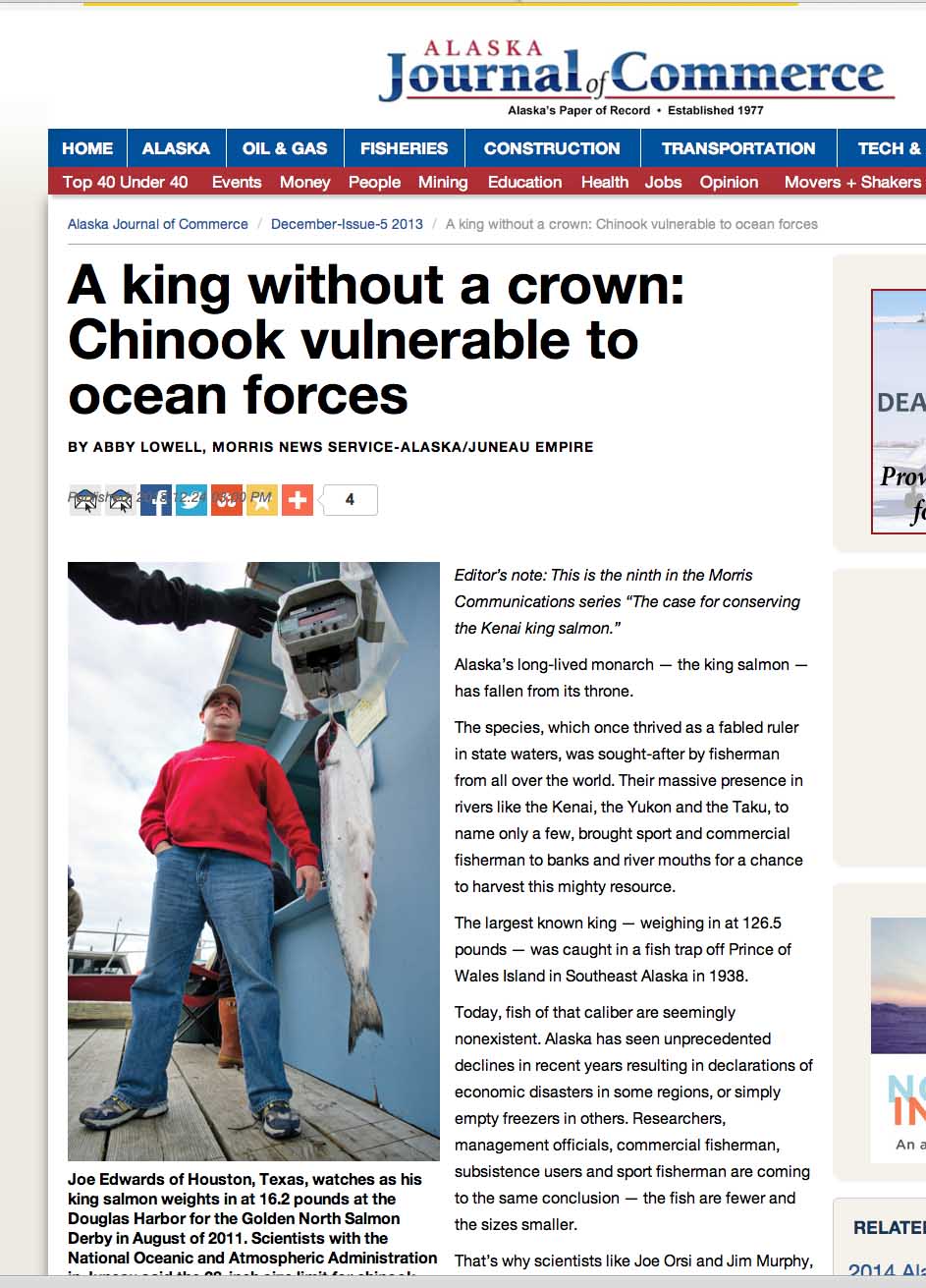