Here’s an article about a dysprosium mine near Hydaburg in SE Alaska.  What is dysprosium you ask?  Well, read the article and find out!

Here’s an excerpt or two:

Thirty-five miles away, at the foot of Bokan Mountain on the shore of Kendrick Bay, however, lies one of the most sought-after natural resources in the world — one that could conceivably reverse the town’s economic fortunes.

Not everyone in Hydaburg, however, is enthusiastic about the idea of a mine. Despite the promise of jobs, some residents say a mine will lead to pollution of their salmon fisheries – amounting to a sacrifice of the town’s economic and cultural lifeblood for a mining prospect that, environmentally and economically, raises more questions than it answers.

“If they (the mining companies) go by the laws, it will be all right,” says Bell. “If they don’t, then they’ll just kill off our fish.”

Ken Collison, a mining engineer and the Chief Operating Officer of Ucore, the company that plans to break ground on the rare earth mine at Bokan Mountain, has the job of explaining why it will not harm the environment.

The mine will be underground, says Collison, with Ucore planning to re-inject the acidic tailings, or toxic byproducts, back into the mountain with cement. “We’ll be the first mine I’ve ever heard about [that] when it closes, there’ll be no tailings whatsoever,” he says.

Ucore also plans to utilize a new technique for sorting minerals that uses laser technology to detect and sort specific ores, which in theory should make the mine more efficient than those that preceded it. The technology in question has never been applied to rare earth mining before.

The article in its entirety can be found at http://newamericamedia.org/2013/07/in-alaska-rare-earth-discovery-pits-jobs-against-environment.php

Shortly we’ll have Napaimute’s annual Pros and Cons of Large-Scale Mining article posted here.  Due to the expense of printing and mailing our annual newsletter, we will forego sending that out this year.  However, it will now appear on the website so stay tuned!! 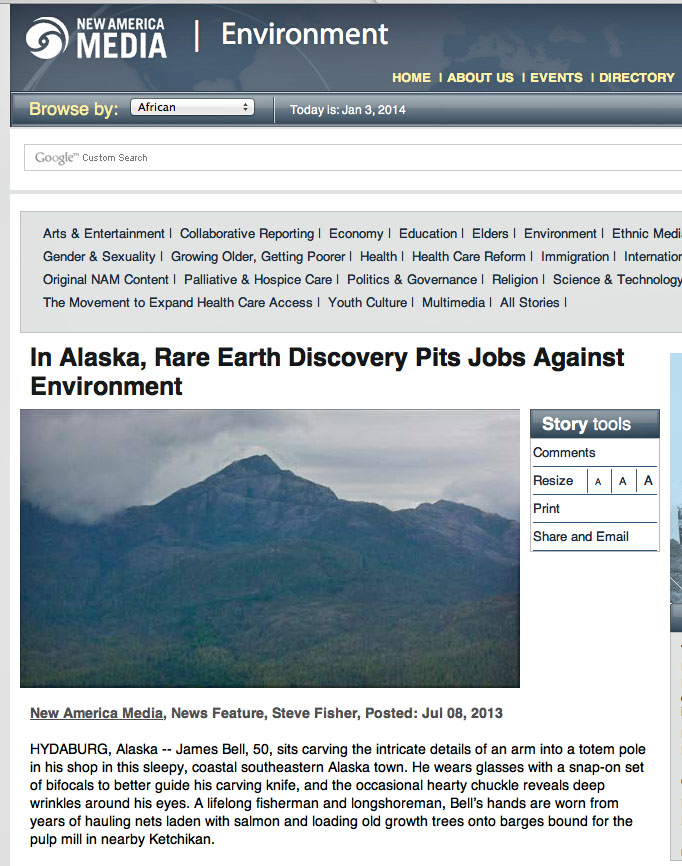