Well since this is supposed to be our end of the year wrap-up report, I’ll discuss what went on last season…but I will do my best to also cover what we should expect for this upcoming summer.

For now the indications are that the king run is going to be as weak…or possibly weaker than what we saw in 2013.  To many people, though, 2013 didn’t look so bad.  Why?  Because many lower river folks had little difficulty filling their fish racks; subsequently, very few complained about the fishing.  I’m afraid that those folks remembered the significant restrictions of 2012 and made up for lost time (restrictions have that effect on behaviors).  The mantra of most everyone – including the Kuskokwim Salmon Management Working Group, ADG&G and USFWS – was, “Let’s not repeat last year (that being 2012)!”.

So in some ways we didn’t repeat 2012, at least as far as the restriction aspect.  Unfortunately, the kings paid the price – as well as upper river fishermen.  It must be noted, however, that the hardships caused by the restrictions placed on all subsistence fishermen in 2012 did pay off with some good dividends.  As best we know, the drainagewide escapement goal established by the Fish & Game for kings was met – barely exceeding the 65,000 minimum level.

Lets take a quick look back a couple more years to 2010 – when the lowest escapement on record occurred (NOT A GOOD THING!).  That year, only around 50,000 kings made it back to the spawning grounds; and Mother Nature being what she is, not every one of those returners produced offspring!  You see, more often than not the majority of kings are males…and many of them are tried and true bachelors that never find a mate.  As is usually the case in the animal kingdom, the competition among males is pretty fierce with the baddest usually winning out.  With kings of the Kuskokwim, a high proportion tends to be jacks and they’re often the ones that go home alone after the party.

One misconception among many locals about those jacks is that they turn around and go back out to sea only to return bigger and badder in later years.  Unfortunately, that is not the case; they die just like all the other Pacific salmon several weeks to a month after they enter fresh water.  They only have one shot at procreating and if they miss their chance – they’re done! 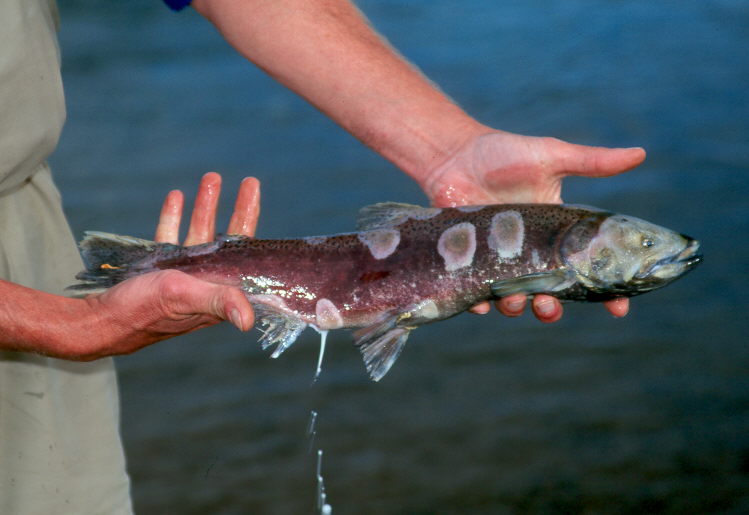 A spent jack king dripping his precious genetic material that has nowhere to go except feed young fishes, birds and insects with his decomposing flesh and nutrients brought in from the sea.

Nature, indeed, can be very cruel.  So the bottom line is that even though we might barely make escapement numbers, we still might not be out of the woods – so to speak – as far as what we’ll see for future returns.

For the second time then in four years we didn’t reach the king salmon escapement goal!  Even though lower river fishers had pretty good success in 2013, the drainagewide escapement number ended up in the toilet.  As of yet we don’t know the exact count, but the preliminary estimate for total river escapement was only half of the desired 65,000.  Whatever it turns out to be, unfortunately, will be a new record….and it is a dismal record – one that mustn’t be repeated.  Preliminary estimates show the likely subsistence harvest on kings in 2013 was still about 70,000, but there was a cost to upriver fishers and the spawning grounds…and maybe future generations.

Throughout most of Alaska king salmon are not faring very well – mostly the result of poor ocean conditions.  As already mentioned, 2014 will be similar to what we saw in 2013 – plus or minus 25 percent.  Since the preliminary estimate for total fish into the Kuskokwim in 2013 was only 100,000, next season’s run might fall short of that by 25%, which would mean we could only have 75,000 entering the Kuskokwim’s mouth and heading up to the spawning grounds.  If that were the case then, there would only be 10,000 above the lower end of the escapement goal.  But managers don’t want to manage to that lower end because of so many variables involved.  Because of those uncertainties, the managers will likely aim for an escapement goal with a little bit of a cushion – likely around 85,000 kings.

The reality then is that if only 75,000 kings or less show up, and we really won’t know that until after the kings pass by, there may be no opportunity to target them.  And as always, there will be the opportunity for fishers to at least fish for other species like whitefishes with a 4-inch or less gillnet that can’t be longer than 60 feet and 45 meshes deep (it will be illegal to target kings with this gear!).  But keep in mind that these nets will incidentally catch a certain amount of kings.  Depending on how many fishers are using the 4-inch gear, it is possible that many thousands of kings will be caught; enough maybe to put us below the 65,000 lower end of the escapement goal range.

But lets be optimistic and say that there are 10,000 kings that are available for subsistence harvest.  Given the length of the Kuskokwim with twenty-five villages scattered from Eek and Tuntutuliak near the mouth all the way up to Nicolai above McGrath, there are roughly 2,500 households.  Can you see the dilemma that is unfolding?  If you divide 10,000 by 2,500 that only comes out to four (4) fish per household.  The Department of Fish & Game would certainly like to give residents a “taste” of fresh fish (that is king salmon), but if people get greedy, someone is going to lose out…and that someone may actually turn out to be many people! 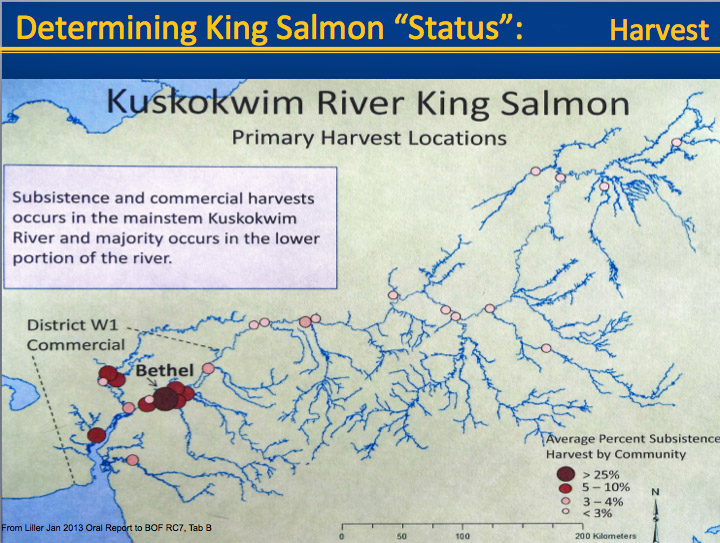 The largest and darkest dots are villages that catch greater than 25% of the king harvest in the entire river, the red dots harvest between 5 and 10%, and the pink dots less than 4%.

In preparation for this upcoming season, managers and the Working Group are considering ways to equitably distribute the available fish; even considering allowing the use of dip nets like has been used on the Yukon and/or restricting 6-inch or greater drift net length to only 25 fathoms.  Dip nets, although they may not work everywhere, would allow king salmon to be released alive while even shorter nets have the potential to catch way more than just four kings on a single drift.

What then is in store for the upcoming 2014 season?  Most likely a year like no one has ever seen on the Kuskokwim before.  Keep in mind that no person living, not even the oldest elder, has ever seen the population that exists on the Y-K Delta…and it only continues to grow.  So when people say, “We only take what we need”, there are many more taking today what they need (I won’t even mention how many relatives have moved to other places like Anchorage that still get salmon from the Kuskokwim).  But the reality is that the numbers may be so low that those fishers who did so well in 2013 will not only have to drastically cut back – but forego catching kings altogether along with everyone else.

Think about it.  The average annual subsistence harvest for king salmon on the Kuskokwim is around 85,000, which is the largest king subsistence fishery in the state.  If only 75,000 kings return, and everyone is out there taking what they normally take, every last king could be removed from the river!  That is unfathomable; granted it is the worst-case scenario, but it is a reality.

The bottom line is that we are ALL need to conserve by sacrificing, at least at the very beginning of the season until the managers have a good idea of how strong or weak the run really is, but it’s more likely that everyone will have to sacrifice for a few years to let the king numbers build back up.

It’s obvious that there will be no room for civil disobedience; that will only take king salmon away from future generations…the children and grandchildren that are counting on us to do the right thing for their children.  Those who go out and take from future generations will not be heroes, they will be thieves.