The Kuskokwim Salmon Management Working group will submit two Emergency Petitions to the Board of Fish in the coming weeks in order to help get more king salmon to the spawning grounds and also alleviate some of the hardship that residents will likely experience with this summer’s anticipated low return of kings.

King salmon have not fared well throughout Alaska, but the Yukon and Kuskokwim river drainages have seen exceptionally poor returns over the last several years.  The Kuskokwim, which in years past of high production is estimated to have had total returns that have exceeded 350,000, may have only had about 94,000 this past summer.  It is possible that there could be even fewer return in 2014.  The best predictor for what might return in the coming year is to take the previous year’s return and add and subtract 25%; so the prediction going into this coming season is a range between 70,000 and 117,000.

You’ll see from the dip net petition below a more detailed breakdown of the possible scenarios, but if the lower end of the range is what we end up getting, that would leave very few kings available for harvest because the lower bound of the desired escapement goal is 65,000 kings; and if that is what we see, that is alarming to say the least.

If that doesn’t demonstrate to all the residents of the Kuskokwim that king salmon conservation is a necessity…then I don’t know what will.  Numbers that bleak leave no room for finger pointing as to who is to blame, we must all do what we can to protect the kings now for future generations.

This dip net petition is aimed at allowing residents to fish with dip nets for chum and sockeye salmon with the stipulation that any kings caught in those nets must be released unharmed so that they can progress on to the spawning grounds; currently dip nets are not allowed in the state regulations.

The other petition would restrict the size of gill nets to 25-fathoms or 150 feet.  Many residents, knowing that the run can be weak and that conservation is likely needed, have expressed the desire to just getting a taste of kings this coming year – but that’s assuming there is some harvestable surplus available.  Restricting the length of net would certainly cut down on per drift efficiency, which hopefully would help prevent a fisher from plucking a substantial number of kings from one drift well beyond the needs for just a taste.  However, it’s possible that one drift with an 150-foot net could still catch a sizable number of kings, but the hope is that those fishers would  shared among the relatives and friends so that the likely limited available harvest was distributed equitably.

Here is the dip net Emergency Petition that will soon be submitted to the Board of Fish:

The purpose of this letter is to request that the Alaska Board of Fisheries (BOF) consider an emergency petition to add dip nets as legal gear for the taking of salmon other than king salmon in the Kuskokwim Area during times of king salmon conservation.  Currently, the regulations only allow for the use of gillnets, fish wheels, beach seines, and hook and line attached to a rod or pole.

Section 5AAC 07.365(2)(a) of the Kuskokwim River Salmon Management Plan states in: In addition to the gear specifications and operations provisions of 5 AAC 01.270(n), when the commissioner determines that it is necessary for the conservation of king salmon, the commissioner may, by emergency order, close the subsistence fishery and immediately reopen the fishery during which gillnet mesh size may not exceed four inches until sockeye and chum abundance exceeds the king salmon abundance;

The Kuskokwim Salmon Management Working Group (Working Group) is requesting that the use of dip nets be allowed during this critical period when king salmon numbers are at an all-time low.  As part of this request, we would like to see the following provision included in a regulation allowing the use of dip nets – “all king salmon caught with a dip net must be released alive to the water.”

We believe that an emergency action by the Board of Fisheries is warranted in accordance with AS AAC 96.625, which states:

The Working Group justifies this request for emergency action based on our conviction that an emergency exists pertaining to both resource conservation and to food security for local residents:

All indications point to a need for restrictions in 2014, even more restrictive than what were imposed in 2012; that year residents experienced the most severe limits ever enacted on the Kuskokwim River.  Figure 2 shows one possible schedule proposed by the department allowing very limited opportunity in June and July.  Regardless of what restriction are in place, and given the likely limited surplus expected, it’s very unlikely that subsistence fishers will be allowed one opening per week as spelled out in the Management Plan (5 AAC 07.365).

If the king salmon run in the Kuskokwim River continues to decline, it is possible and downright frightening, that no harvestable surplus would be available from the get go.  As noted, restrictions are almost a certainty.  No one wants to repeat last year’s scenario of the disparity among fishers’ ability to harvest king salmon and the non-attainment of escapement.  Limiting the customary methods of fishing that most Kuskokwim residents employ for extended time periods would certainly hinder fishers’ ability and opportunity to fulfill their subsistence fisheries needs.  Depending on the king salmon conservation measures executed, it is possible that they would interfere with the ability of fishers to harvest other abundant salmon species like chum or sockeye salmon.

The addition of dip nets as a gear option could broaden fishers’ opportunity to provide for their families by allowing subsistence activities to proceed without severely impacting the king run.  If the Board were to accept this emergency petition, it would provide one more method that could allow fishers an opportunity to attempt to supplement their normal subsistence harvest by catching chum and sockeye salmon.

The Kuskokwim Salmon Management Working Group fully understands that the allowance of dip nets is not the solution to the impending food security dilemma for several reasons: 1) this is a new method and very few residents own a dip net at this time and 2) It will take time for people to learn how and where to use a dip net effectively.  However, dip nets, if applied successfully, can help mitigate the impact of king conservation measures on food security for at least some Kuskokwim subsistence users. 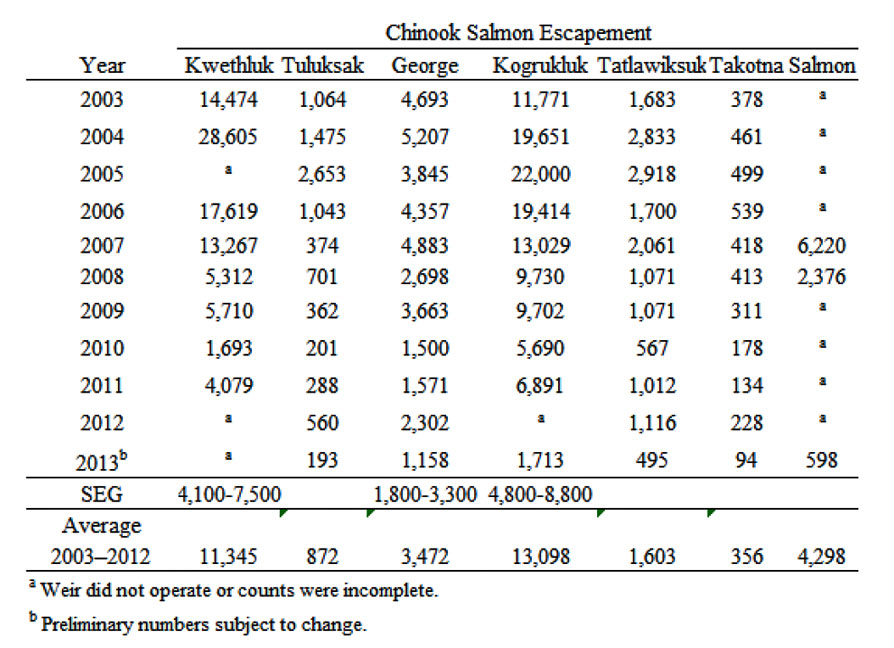 2013 weir counts showing the lowest escapement on record for every project. 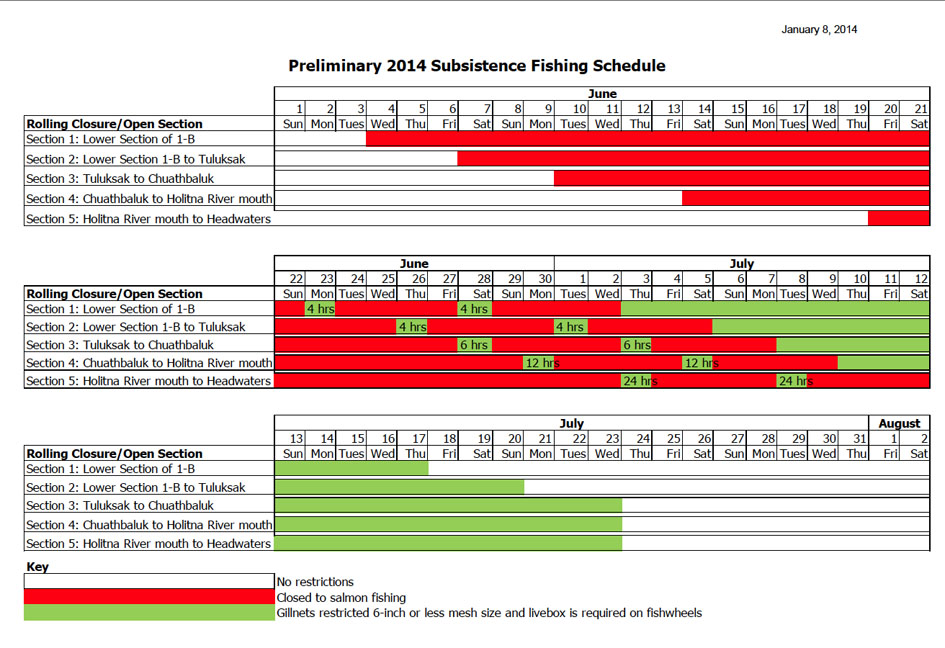 One of the Department’s preliminary schedules proposed to address conservation concerns if an extremely weak run of kings returns to the Kuskokwim.