Why Is Escapement So Important?

In order to answer that, we must first know what escapement is.

Escapement is a word biologists use for the salmon that make it past all the fishermen, be they subsistence, commercial or sport fishermen.  Escapement is the amount of fish that manage to reach the spawning grounds, the very same streams they were born in several years before.  In regards to salmon, biologists, consider the total escapement to be how many kings, reds, chums, pinks or coho that spawn in a given year, with each species having their own escapement number.

Here is a graph that shows the Kuskokwim king salmon escapement numbers along with the subsistence & commercial harvests all the way back to 1976.  The dark black bars are the escapement numbers while the crosshatched bars indicate the subsistence harvest – note that the average subsistence harvest is fairly constant at about 80,000.  The relatively small medium dark gray rectangles at the top of some of the bars are the commercial catch for that year (these are the relatively few kings caught incidentally during the chum and coho fisheries – for example 1998, 2008 & 2009).  Due to the scale used on the graphs, sportfish harvest for king salmon is so small that it doesn’t even show up on the graph (it generally a few hundred or less). 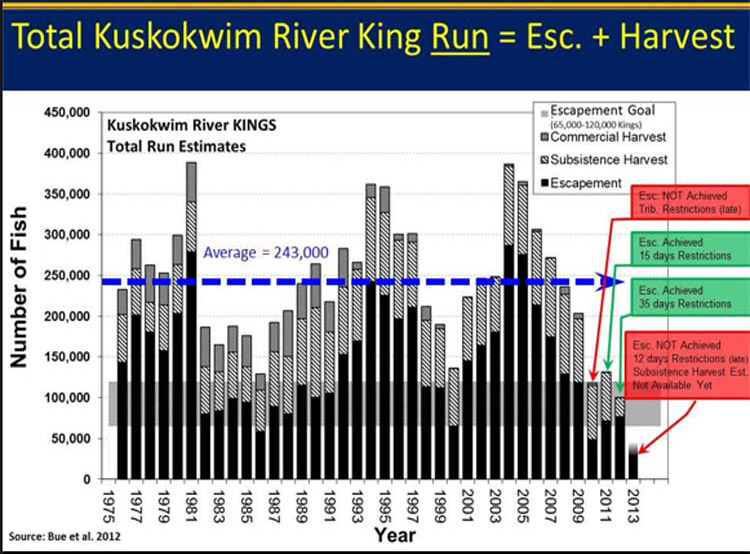 During the past 35 years the average total run of king salmon to the Kuskokwim was 243,000 fish.  If you look at the bars spanning the various years, you’ll see that escapement wasn’t met in 1986 or 2000.  The gray band going across the graph beginning near the number 100,000 on the left side is the desired escapement goal range.

A range is used rather than one set number, mostly because fish and other wildlife populations naturally fluctuate from year to year.  The desired range for the entire Kuskokwim River drainage is 65,000 to 110,000 (again – that gray band going across the graph).

Also note that there were several periods of highs and lows…or cycles.  It’s believed that those cycles have a lot to do with cyclic ocean conditions…something called the Pacific Decadal Oscillation.  Roughly, every ten years ocean conditions flip flop from being highly productive to less productive; hence the term decadal for decade.

It appears that the vast majority of Alaska’s king salmon are in decline, and all of the weir projects and aerial salmon counts throughout the Kuskokwim verify this.  It’s the weir projects on the Kwethluk, Tuluksak, George, Tatlawiksuk, Salmon, Kogrukluk and Takotna Rivers that give biologists accurate escapement information that helps them estimate the total escapement for the entire Kuskokwim River.

Even though 65,000 is the low end of the range in our case, managers prefer not to aim for that number year after year; in fact they’d prefer to hit the midpoint of around 85,000.  Continually attaining 65,000 could lead to an drastic decline, especially when the ocean productivity dips like mentioned above.  The result would be a dangerously low level, one that wouldn’t sustain a subsistence harvest of 80,000 kings that the residents of the Kuskokwim are used to.

We’re actually at that point now.

WHY THE CONCERN THIS COMING SUMMER?

Below is a close-up of the same graph showing only the past 16 years.  Note that the escapement of 65,000 was not met in 2010 nor last year; and the lower end of the goal was just barely met in 2011 and 2012.  The last four years should be cause for alarm because we are in a much more drastic slump than in 1986 or 2000…those were more or less single year dips.  If we don’t get adequate numbers of kings up to the spawning grounds in the coming years and the ocean conditions don’t turn around…and too many kings get harvested this year – that would endanger the future runs for many years.

And that is why the Kuskokwim Salmon Management Group supports strong conservation measures, measures that we’ve never seen before.  The Working Group members are not only thinking about this coming summer, but they are considering the future and the overall good of everyone.

If you remember back just a few years when we had very few moose on the delta, that’s what regularly not meeting escapement would be like – too few fish to be harvested by the 2,000 + subsistence households.  It took drastic measures like a moratorium on the moose to get them to the point where they are now showing up in places like Bethel on a regular basis.

Well, it’s definitely going to take some sacrifices by everyone to bring the kings back.

It’s been said – it takes a fish to make a fish.  We’re all responsible to make sure we get enough fish to the spawning grounds to keep the run strong for not only the near term, but many generations to come.