To the delight of the Alaska Federation of Natives (AFN) and other native entities across the state the U.S. Supreme Court rejected the State’s petition in the legal case State of Alaska vs Sally Jewell, Secretary of the United States Department of Interior – a.k.a. the Katie John Case. 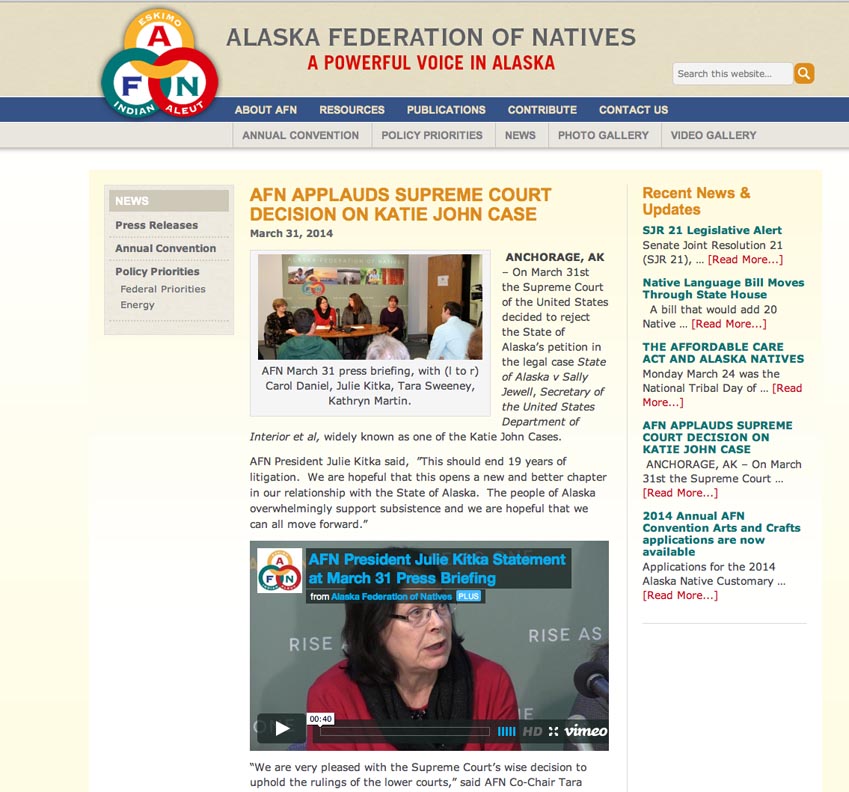 But…according to the Fairbanks Daily News-Miner the legal and/or political wrangling may not be over:  FAIRBANKS – One day after the United States Supreme Court declined the state of Alaska’s appeal in the most recent iteration of the Katie John cases, the fight about subsistence hunting rights and the state’s water rights is far from over.

The state filed its petition to the country’s highest court in November in response to a ruling in the 9th Circuit Court of Appeals that gave authority to the federal government regarding the use of inland Alaska waters for subsistence hunting by rural Alaskans.  The federal government provides subsistence hunting and fishing priority on navigable waters to rural Alaskans, while the state does not.  The 9th Circuit ruled, through a number of appeals and new cases brought before the court throughout the past two decades, that the federal provision effectively superseded the state’s authority in the matter.

Here is the News-Miner article in its entirety:  http://www.newsminer.com/news/local_news/both-sides-vow-to-keep-fighting-in-katie-john-saga/article_dcaeaa5c-ba3c-11e3-839f-001a4bcf6878.html