As we approach this coming summer’s fishing season with the high potential for another year of low king salmon returns and the risk of not meeting escapement for the third time in five years, at stake is the future of the subsistence king salmon fishery.  Therefore, we must listen to our elders and heed their knowledge, advice and warnings.

John Berlin, from Nunapichuk, was recently quoted in a KYUK news article saying, “If the animals we use had no one watching over them, making sure they are doing good, they would have already been gone.”  http://kyuk.org/yupik-people-express-opinions-about-the-possibility-of-no-king-salmon-fishing-this-summer/

His elderly wisdom is brought about from observing animal populations fluctuate over time as well as many other changes, and he realizes that people of the region must be able and willing to adapt.  During his lifetime he witnessed how, “There were many jack rabbits in our area, but when we started using snow machines, they were able to chase and hunt them till there was almost none and they haven’t recovered.”

Similarly, at the recent RAC Federal 804 Determination meetings Bob Aloysius emphasized that, “In the 1960’s, the introduction of big gear 50 fathoms – 45 mesh deep – 8 to 8 1/2 inch – was unheard of, so this idea of harvesting king salmon is not a traditional and customary process; it is a learned process.

Because big fish bring big money. And where are all those big fish going?  They’re going up to the headwaters to spawn.  And as children we were taught – let them go, let them by.”

The learned process that Bob was referring to was when the commercial fishery expanded in scope during the 1960’s when fish prices were very good and fishers did target the kings.  That’s when people could afford to buy larger and much more efficient nets…not to mention bigger and better boats and motors!

During the 60’s, the average king salmon commercial harvest was 22,518; the 70’s saw an average of 34,383; and the 80’s had 38,910.  So there was a steady increase in harvest over time, with the highest individual yearly harvest being 55,716 in 1988 (this was actually incidental harvest from the commercial chum targeted fishery since the targeted king salmon fishing ended in 1987).

Bob, in reminiscing about times gone by, then went on, “Between Kalskag and Aniak every bend had a fish camp.  Every fish camp had anywhere from one to five families living in there.  Their major task was to go after the abundant salmon…and that is the chums.

No one ever harvested, or targeted king salmon.  Occasionally we would get them yes, in 5 ½” gear…and again, I’m going to emphasize the simple fact that the targeting of king salmon is a learned process.  And we’re paying for it – the Yukon is paying for it.

If we’re sincere about bringing back our king salmon, there’s going to be a lot of sacrifice, yes…right now…the danger signs are there!  Every year since 2007 the cycle has been going down, until last year it almost bottomed out.”

James Charles from Tuntutuliak also agreed with Bob’s words during the RAC meetings by saying, “I grew up in the village, at Tuntutuliak, and we didn’t fish for kings too much those years.  We fished for chums and other salmon neqa’.

And we practically ate fish every day and that’s what I survived on; but not very many king salmon.  When somebody had a king salmon net, it would be like ten to fifteen fathoms long and used by one family.  When one family was done with it they would lend it to some of the village members or neighbors.  Those years we made our own nets and didn’t buy them from the store or net companies.”

The table below shows just how effective those bigger nets were, or still are, at harvesting kings – so it’s understandable as to why they are the gear of choice today.  But as our respected elders have said, it’s only during the past 50+ years that king salmon have been the subsistence fish of choice.  Please consider that wisdom as we go into another potentially contentious fishing season.  With the fate of the king salmon squarely in our hands, each and every one of us has the option of sacrificing for the good of the kings and future generations by gathering other neqa’ with whatever legal means available. 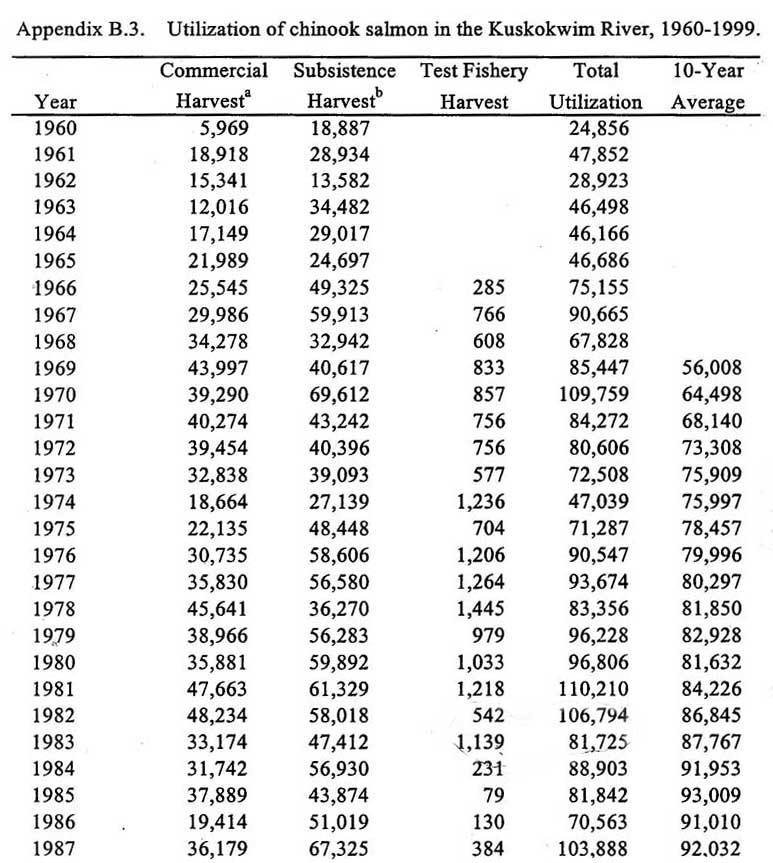 And you’ve seen this graph below before, but it doesn’t hurt to re-emphasize just why sacrifices and conservation measures are warranted.  If we don’t take significant actions this coming summer to meet escapement needs, our children and future generations will pay the ultimate price. 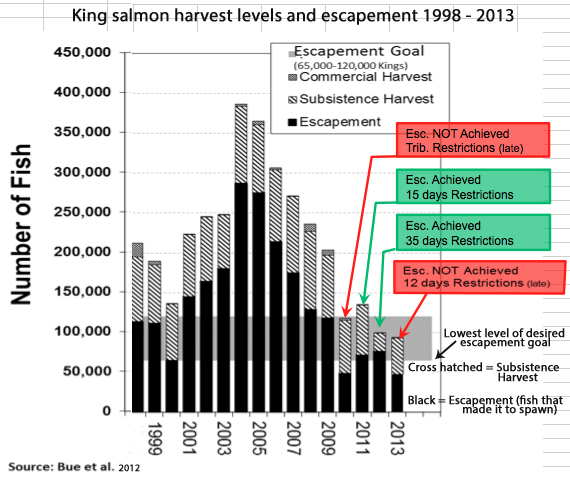