Ever since last year’s disastrous king salmon run on the Kuskokwim, people up and down the river have been talking about the need for greater conservation of this valuable resource.  People often have very different understandings, however, about what “conservation” actually means.  My recent and ongoing experience as in-season manager of the Kuskokwim king fishery has helped to bring that message home to me.

Last week, I had the honor of visiting the village of Tuluksak to meet with their tribal council.  I shared with them the measures that we plan to take to protect the king salmon this year.  Understandably, the council members were very concerned about the impacts those measures would have on their community.  They wondered why they should have to bear such additional burdens since they had already been practicing conservation for years.  When I asked if they could describe for me what their conservation practices had been, they responded very eloquently.  In addition, as they saw me taking notes, they insisted, “Be sure to write this down,” and so I did.

The council members explained to me how important it was to be able to catch and process their king salmon when the weather was optimal for drying, so as to avoid spoiling and waste.  They also explained that every year, the community has several young men who each go out and fish for kings, not just for themselves or for their own families, but for several other families as well.  That way, fish are provided for the elders who may not be able to fish, for families who can’t afford boat gas or new nets, and anyone else in the community who may not be in a position to provide enough kings for their families.  The council emphasized how valued and treasured every single king salmon was and they explained how each fish was often cut into several separate pieces to be distributed immediately among community members.  Those receiving the fish might use it in different ways—some might dry what they receive, others might freeze it for the winter, others might need it to feed their families right away.  In each case, however, the fish was treated with respect, used thoroughly, and shared generously.

In light of that understanding of conservation, it is easy to understand their passionate concern, and even anger, about other practices that are not respectful.  As we often hear at other public meetings, the villagers in Tuluksak are extremely offended when they hear about the king salmon by-catch in the Bering Sea pollock fishery as practiced by Coastal Villages and other.  They are concerned about the potential risks of contamination on the Tuluksak River due to Calista’s mining operation at Nyac.  They seek reassurance that salmon weirs are indeed allowing the fish to pass through the weirs and make it to the spawning grounds.  They want to be sure that the salmon caught in the Bethel Test Fishery are distributed and made available to people who need fish.

In summary, the tribal council explained that their people see the salmon as a precious gift, and “conservation” means to always treat and use that gift with respect. We have heard that same valuable message before in our discussions with tribal representatives, RAC members, Yupiit Nation, AVCP, and the Kuskokwim River Salmon Management Working Group.

Having great respect for how the fish are used is an important part of king salmon conservation.  Over the last year, however, we have also heard another message from folks up and down the river.  They have emphasized that “conservation” also means making sure that enough king salmon make it up river and into the tributaries so that they can spawn.  Our colleagues with ADFG have established escapement goals as part of a conservation strategy; their studies suggest that if enough salmon make it past all the hurdles they encounter along their long migration, then we should have healthy salmon populations into the future.  Our shared concern is that for several years, the king salmon runs along many of our Kuskokwim river tributaries have not met the escapement goals.  That is why managers believe it is necessary to have serious restrictions this year–so that enough king salmon can make it up the river to spawn.  This is another form of conservation, another way to show respect for those fish that are so important to all of us and to our families.

So, as we have seen, people up and down the Kuskokwim River do believe that king salmon conservation is very important, but different groups may use that word in different ways.  Perhaps we should talk about “salmon stewardship” when we speak about recognizing and cherishing this amazing “living gift” from the river.  We may not be able to have as much influence as we would like on the political, economical, and biological factors that affect the salmon outside our region.  However, here along the Kuskokwim, users and managers must take responsibility to do as much as we can locally to strengthen the returns of our fish.  All of us must pull together and practice careful and reverent salmon stewardship.  We must all understand how important it is to treat the salmon with respect in every way—in how we catch them, how we share them, how we study them, how we manage them, and how we honor them by allowing enough to pass our nets and reach the spawning grounds so that this year’s return might bring forth the next generation of king salmon. 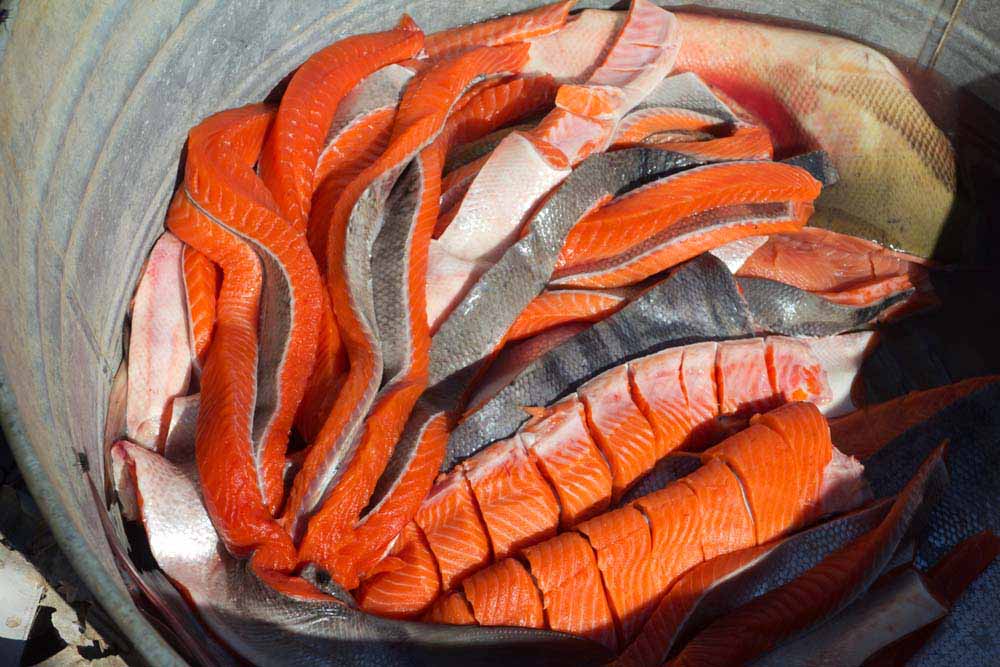