Weirs – They’re Not The Problem Some People Think They Are…In Fact, They’re the BEST Tool To Know What Is Going On With The King Salmon

It seems that every so often during a public meeting or on the KYUK call-in show that someone brings up their concerns about weirs contributing to the decline of the salmon.  But it’s the weirs that provide managers with the information as to how many salmon actually made it to the spawning grounds – or the escapement.  It’s the weirs that tell us whether or not management actions (e.g., gear restrictions, closures, etc.) did what they were intended to do.

Weirs are not part of the problem – they are a necessary tool.

Weirs also give biologists valuable information such as age, sex and length composition – things that can help formulate pre-season run strength projections, among other things.

If it were not for the Kwethluk weir, we wouldn’t know just how critically low the escapement has been the past few years (e.g., in good years the Kwethluk has had over 20,000 but twice in the past four years less than 2,000).

Weirs have been operated successfully in Alaska since the 1920’s in some places (Karluk River and Chignik River) and in the Kuskokwim River since 1976 (Kogrukluk River weir), so they have seen periods of high salmon abundance and low abundance. In the Kuskokwim River they are the best way to monitor salmon escapement. The weirs we have are nicely distributed throughout the drainage too (except for the upper Kuskokwim because Takotna River weir is not being operated this year). It is also good to have multiple weirs because high water sometimes make one or more weir inoperable for a period of days. You can use the pattern of salmon passage at the weirs that remained operable to help estimate the passage for the days missed at the weirs that were inoperable for a few days. Also keep in mind each weir is counting all salmon species, not just kings.

Attached are a few photos that show how weirs work.  Every weir is a little different, adjusted to the river they are on. The attached photos are from a variety of weirs operated in the Kuskokwim Area (Takotna, Tatlawiksuk, George, Kwethluk, and Kanektok in Kuskokwim Bay).

Aerial view of a weir, where you can see it is straight across the channel. 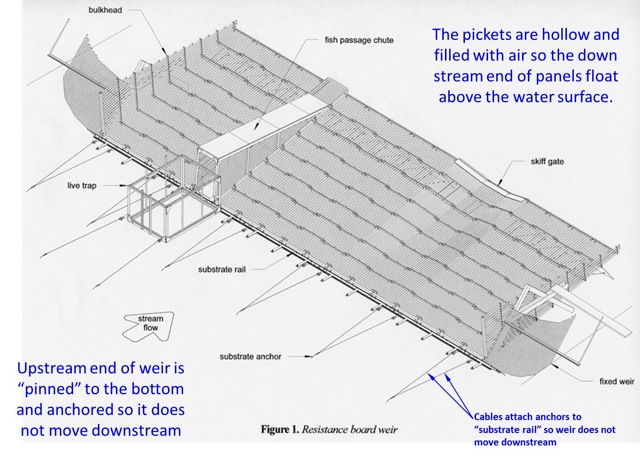 How a “floating weir” is constructed and why it “floats”. Drawings by Rob Stewart (ADF&G) 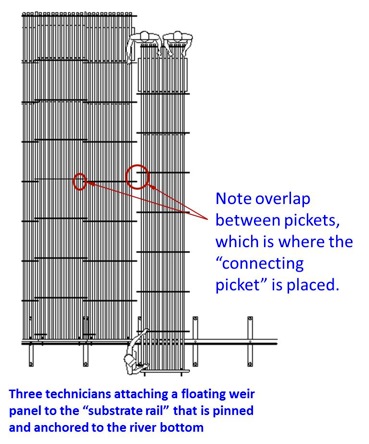 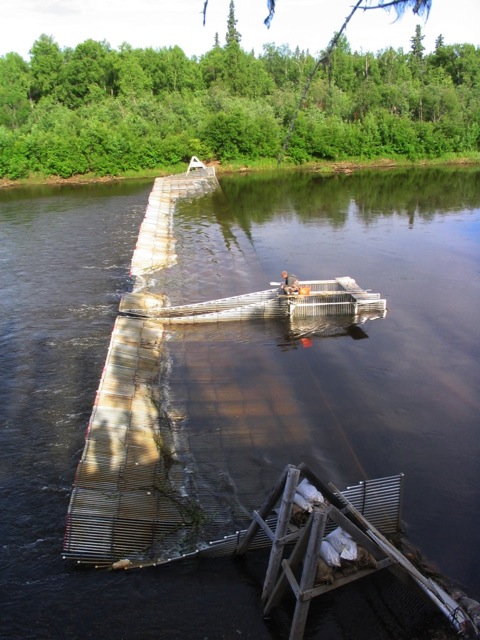 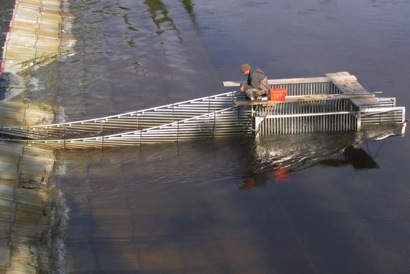 Actual video of salmon passing through the chute of the Salmon River weir – a tributary of the Aniak River: https://www.youtube.com/watch?v=iBdGPFvq79w 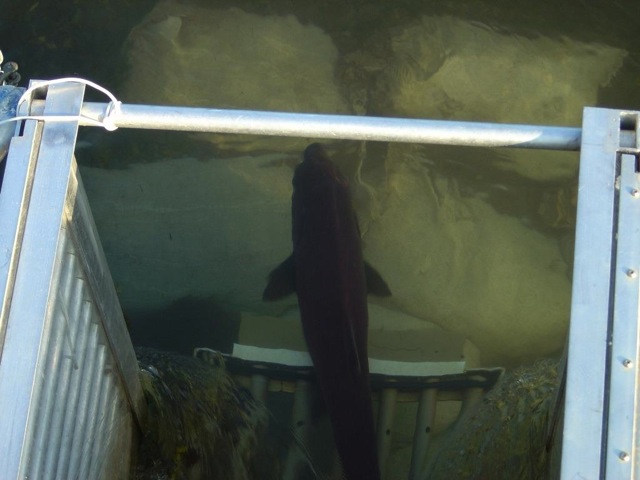 The view from above looking down as fish pass through the weir. 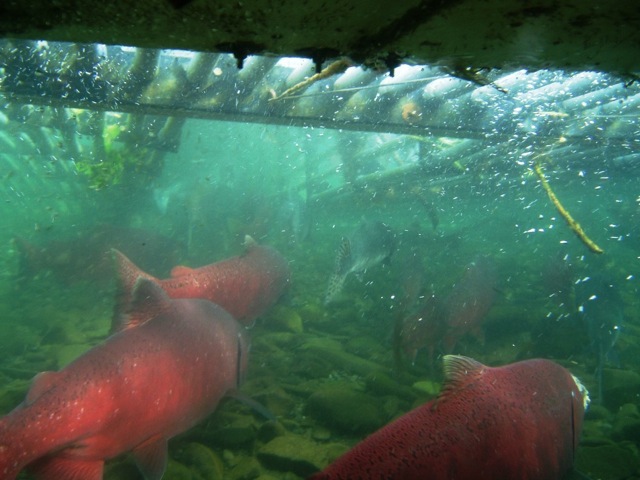 Fish heading into the chute (which they can readily find) on the Kanektok weir. (Photo Mark Lisac USFWS) 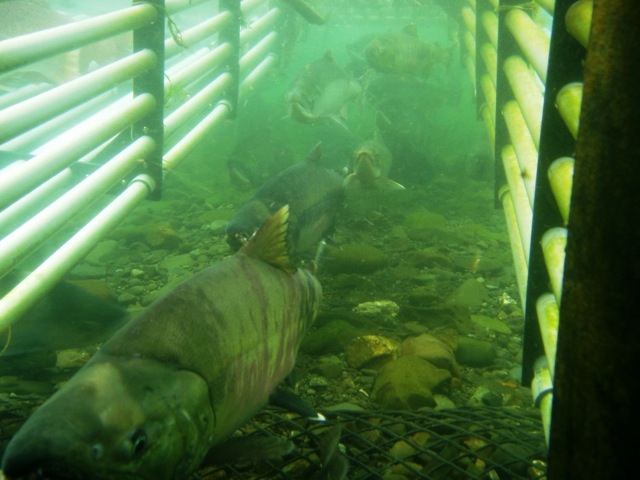 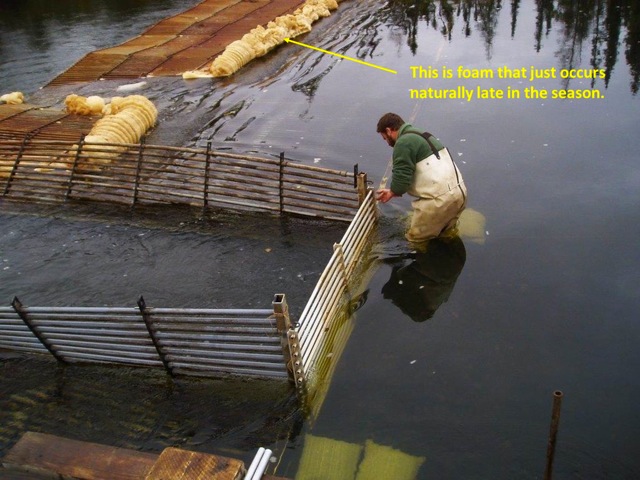 Crew member opening up a weir to make it even easier for fish to pass on upstream. 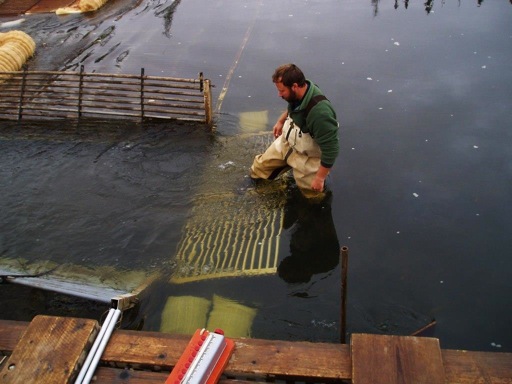 Lowering a panel to make it easier for fish to pass through. 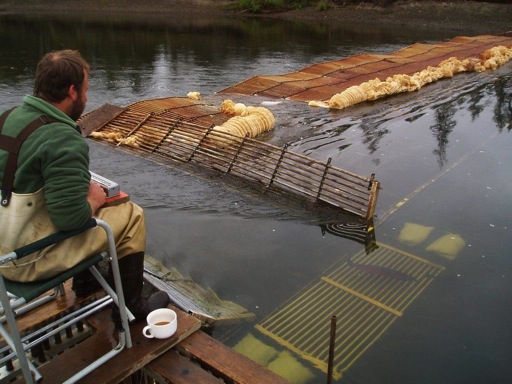 Counting the fish as they pass alongside the trap. 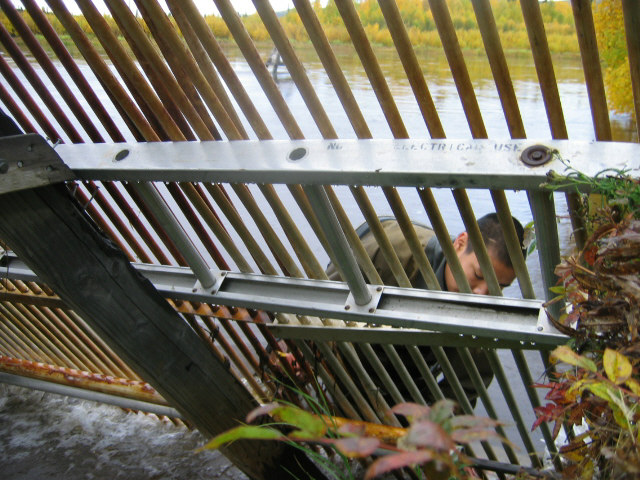 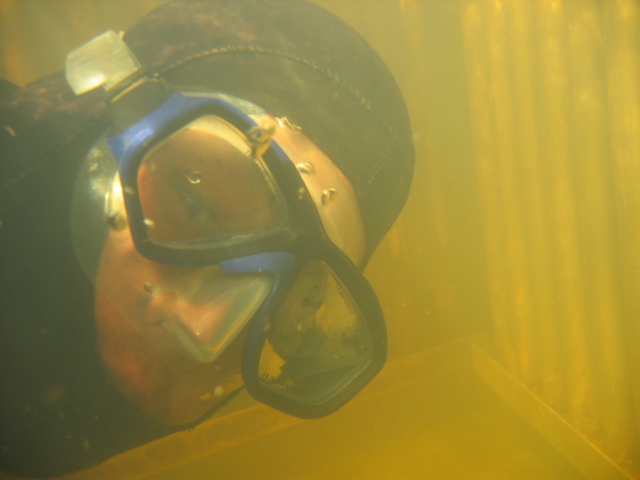 Crew member getting a fish eye view of the weir – he’s also looking for holes.

Crew members check for holes several times a day to make sure they are not “leaking fish” that are not being counted. Any holes are immediately fixed and the crew member makes a note about the hole. The project biologist may decide to make an estimate of how many fish may have leaked through – this would only be done if there was a drop in the counted fish passage during the time the hole was present (between checks). 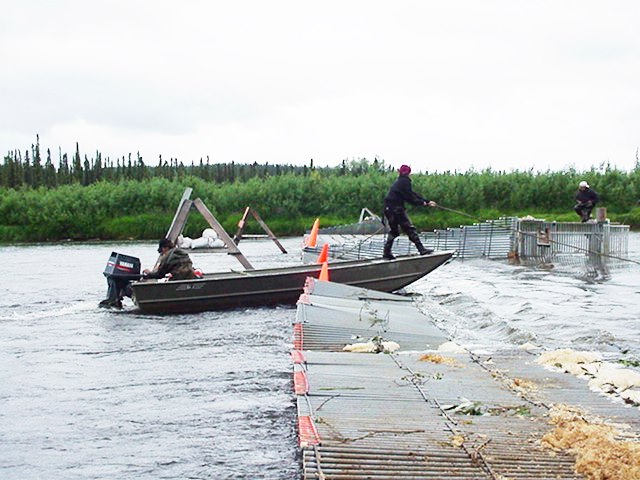 Prop boat passing upstream of a weir using a rope set by the crew specifically for that purpose. Boats with jet motors can pass right over a floating weir – although it is best they slow down. 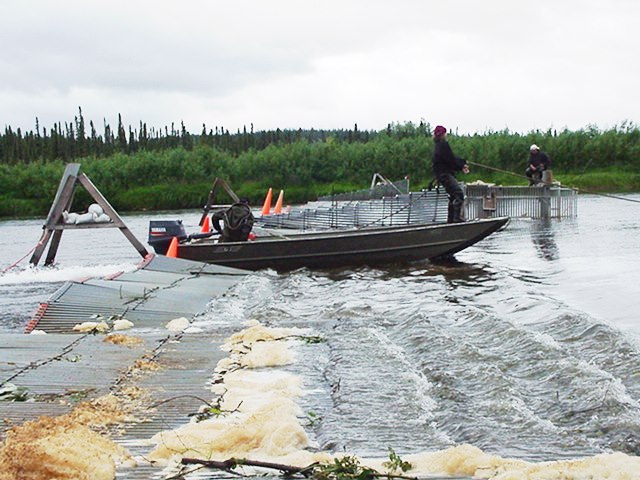 Just about over the weir. 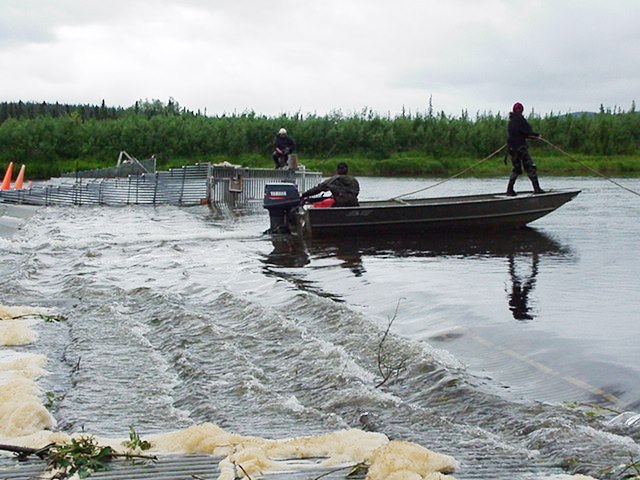 On their way to hunting, fishing, berry picking or whatever their destination may be.

When fish passage is slow, and there is no sign of fish immediately downstream of the weir, then the crew will close the passage gates for a few hours, otherwise the weirs are left open and a crew members is out passing fish. At Kwethluk and Tuluksak weirs they go an extra measure and use video equipment to watch for passing fish 24 hours a day, 7 days a week. The crew watch video from the comfort of their tent or cabin, fast forwarding though periods when fish are not passing.