In a stand for conservation, the recently formed Kuskokwim River Inter-Tribal Fisheries Commission (KRITFC) recommend a closure of the upcoming 4 “set-net opener in the lower river scheduled to begin Thursday June 18th, to Federal Managers at a meeting held this last Tuesday.

Their recommendation was based on Bethel Test Fish (BTF) numbers being less than half of what they were on this date in 2014 (see chart below), and the high number of 4” set-nets observed in the lower river that were intentionally targeting Chinook salmon. 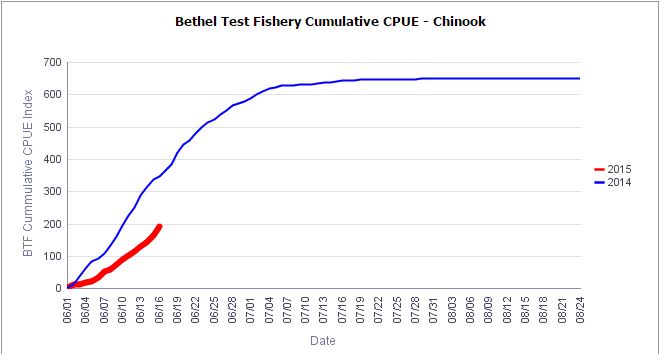 On Tuesday BTF numbers were less than half of what they needed to be to meet 2014 salmon abundance which the KRITFC, and Federal Managers based their preseason strategy on that would allow for some limited opportunity.  The BTF numbers have improved over the last few days but not enough to “catch” the 2015 line shown in the graph.  By closing this next open period in the lower river the hope is to move the 2015 line closer to the 2014 line to meet escapement (spawning salmon) goals.