Wild fire raging on the north side of the Kuskokwim just below Aniak.
This fire eventually consumed over 50,000 acres. As of this report there are still 81 fires burning in southwest Alaska including this one

The focus of the past few weeks since our June Council Meeting has been working to get our winter’s supply of salmon during a season of unprecedented and extended subsistence fishing restrictions on the Kuskokwim River, almost daily participation in fisheries management decisions at the Tribal, Federal, and State levels in a never-ending struggle to obtain equal fishing opportunity for the Middle and Upper Kuskokwim while ensuring the sustainability of Kuskokwim Salmon runs.

A great deal of time was also spent keeping track of the historical number of wildfires burning all around us and working to make sure we were prepared to protect Napaimute from fire if the need arose.

Lastly we made preparations for a good old fashioned 4th of July in our village.

Tagged Salmon caught at Napaimute: these Kings were tagged 180 miles downriver in a study being conducted by ADF&G. This study is showing travel speeds of King Salmon to be 20-21 miles per day as they steadily move upstream to their spawning grounds

Smokehouse on the 27th of June: in previous years there would be many more poles, two tiers of fish hanging, and we would be done fishing
It is July 10th and we are still fishing

The 2015 King salmon run has proved to be weak and eventually all 4” set nets were banned from the Kuskokwim River below Tuluksak. The removal of the hundreds of set nets in the lower river was a direct result of a consultation between the USFWS and the Kuskokwim Inter-tribal Fish Commission (KRITFC). The Upriver Tribes were going to walk away from the KRITFC if the nets were not removed and the KRITFC would have died just a month after its inauguration. This was the first real test of the KRITFC to see if it truly represented ALL of the tribes along the River or was it in reality just a LOWER Kuskokwim Inter-Tribal Fish Commission. In the end they did the right thing and the KRITFC lives on.

A first ever Elders Fishery was held in State managed waters above Aniak on June 21. An Elder over the age of 60 had to be physically in the boat during this short 4 hour opener. 4 boats with Elders fished at Napaimute.

It was an enjoyable day. 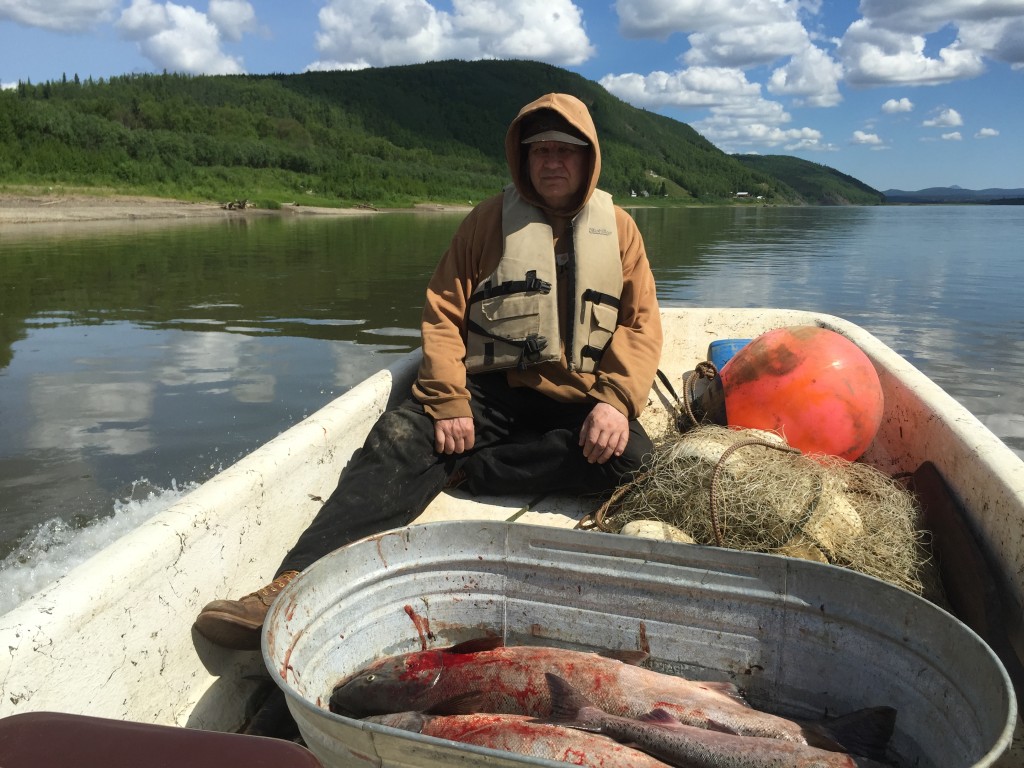 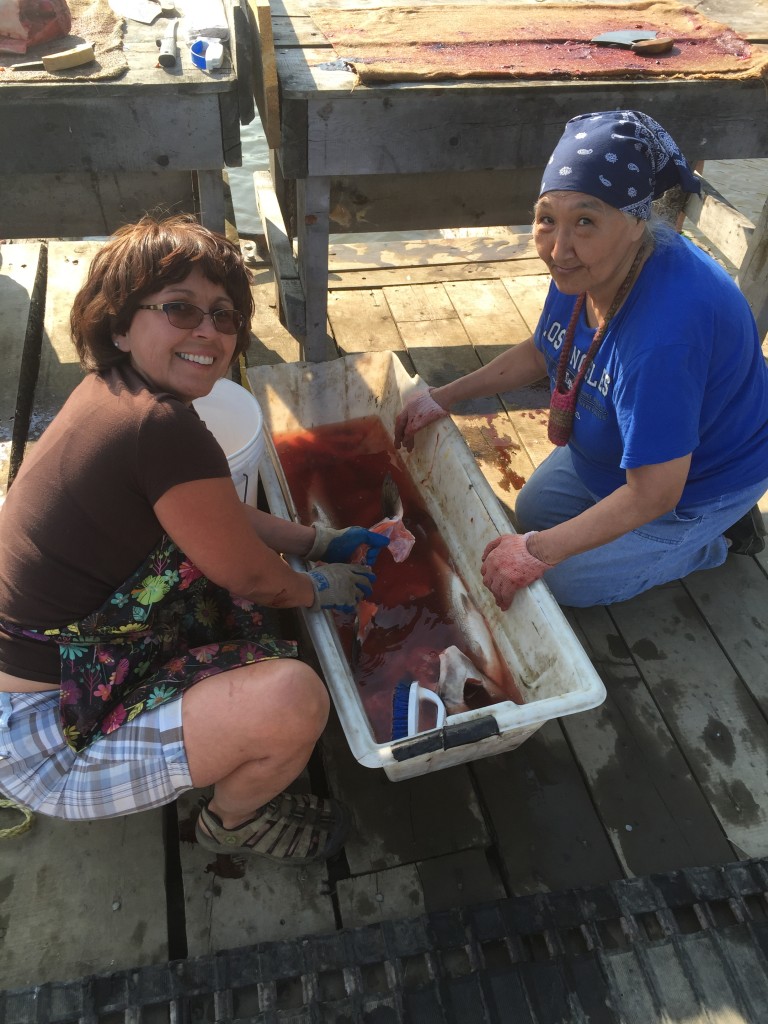 On the 23rd of June members of the State Board of Fish (BOF) came to the Middle Kuskokwim to get a firsthand look at the fishing issues of our River. We took them and several other high level ADF&G administrators on a tour of local fish camps. A potluck was held afterwards in Aniak. I believe this visit by the BOF was an effort by them to gain a better understanding that will allow them to address a more equitable subsistence fishing allocation strategy for the Kuskokwim River. 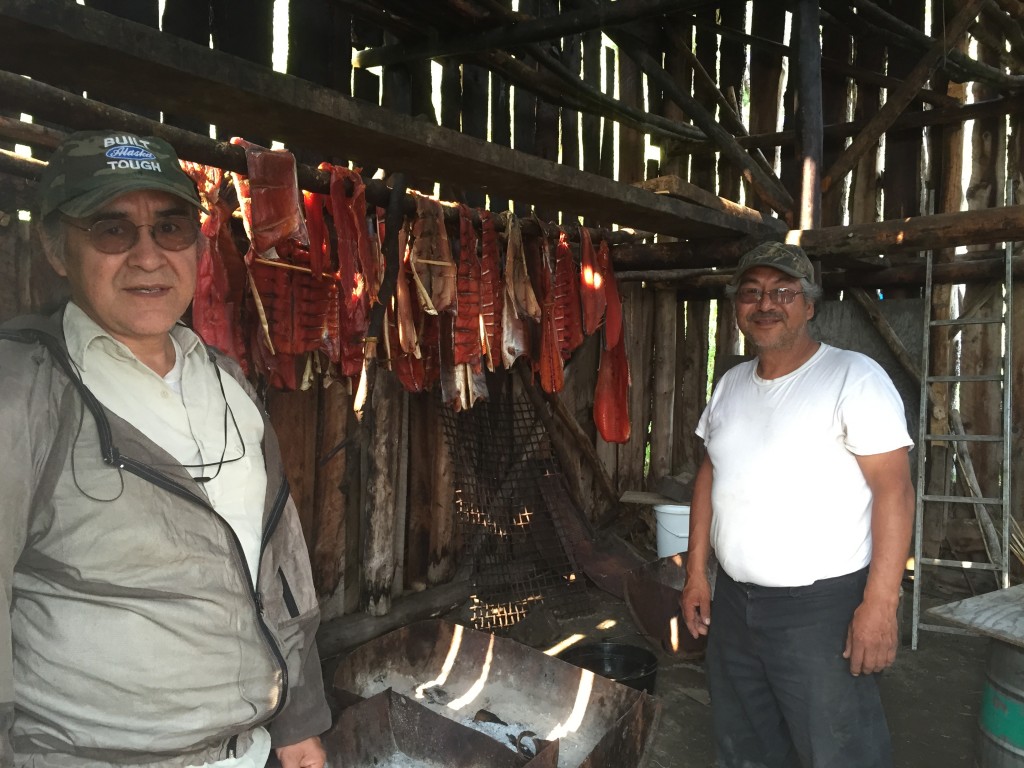 At Napaimute the fish wheel has been a true blessing. This has been the only running fish wheel on the Kuskokwim and fish from it have been shared from Red Devil to Aniak. Some days were frustrating as it was catching 20 or more Kings a day that had to be released back into the River. But eventually the Kings passed and the wheel began to catch Reds and Whitefish – very few Chums. 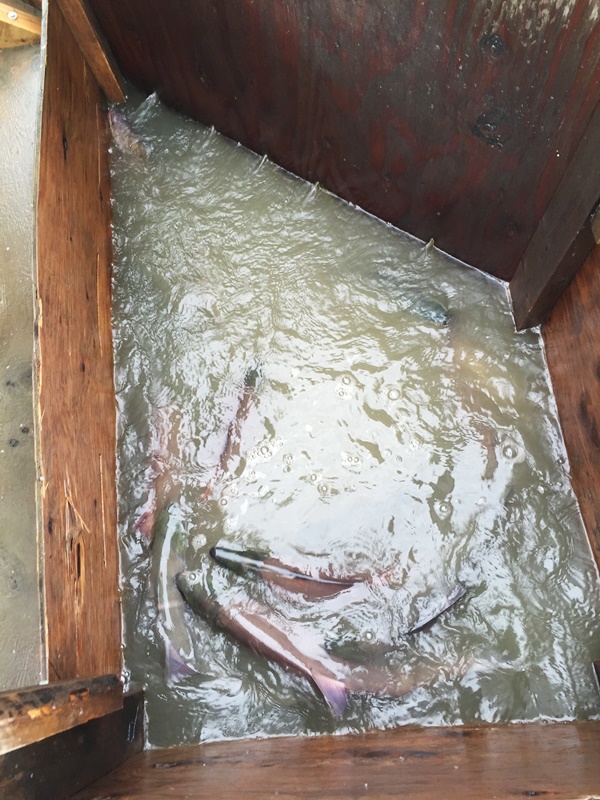 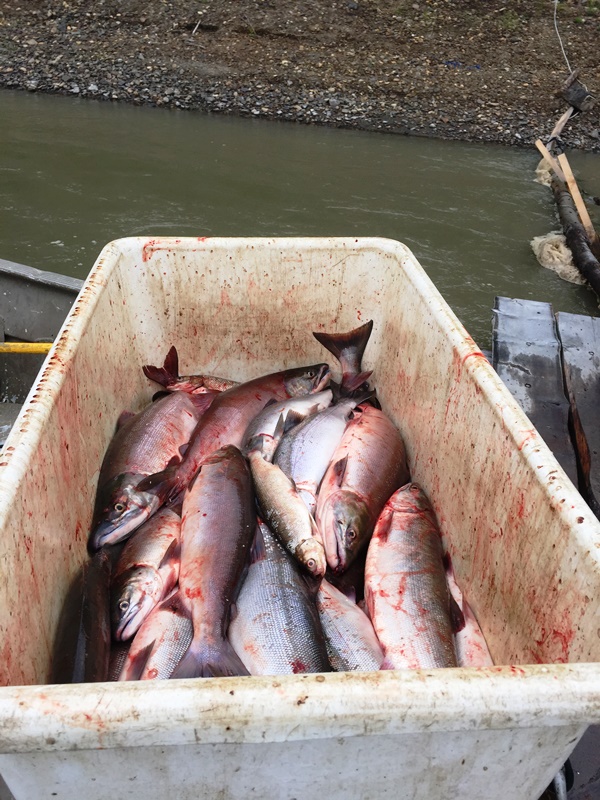 A morning’s catch: tub of Red Salmon and Whitefish 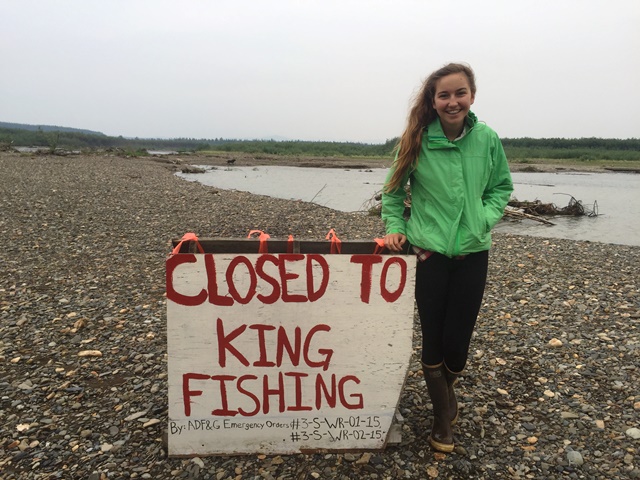 Alukaq River Sign: All sport fishing for King Salmon is closed on the Kuskokwim 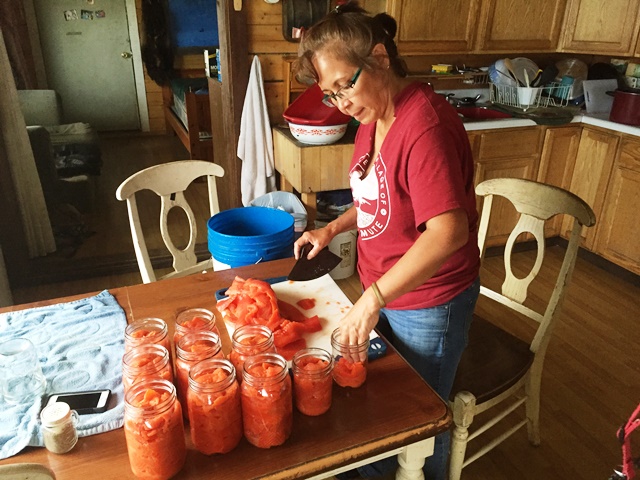 Many long hours spent putting away Fish in many different ways

With the passage of the King run Federal management of the Kuskokwim from Aniak to the mouth was turned back over to the State on July 2nd.

The low King run was followed by what looks like may be one of the lowest Chum runs on record. Because of this the Alaska Department of Fish and Game has continued fishing restrictions into July and they may very well carry them through to the end of the month. They are allowing two subsistence openings per week at this time. Hours vary for different parts of the River.

We are very thankful that the Red run has been good.

It has been a record breaking fire season in Alaska in general and in particular for our region. As reported in early emails and pictures we were called to help Crow Village with a fire protection on the 25th of June. This experience made me realize that the one fire pump/hose set we have in Napaimute would be inadequate to fight these fires. The front of these fires can stretch over long distances with individual fingers rapidly shooting forward as new more volatile fuel sources (spruce) are reached. I called Bethel Search and Rescue (BSAR) to see if they could help. Other villages above us were also in need of additional firefighting resources. BSAR was able to put together four additional fire pumps and hundreds of feet of hose with the help of the Bethel City Fire Department.

The BSAR hasty team made the 560 mile round trip from Bethel to Red Devil in less than 24 hours. They traveled through many miles of visibility less than 1/2 mile from the heavy smoke and areas where fire was actually burning right along the Riverbank.

These dedicated men traveled throughout the day and night stopping only for a short time in Red Devil to deliver the firefighting equipment and eat. They finally took a short rest in Napaimute on the down bound trip early Friday morning.

Great work by a great crew. 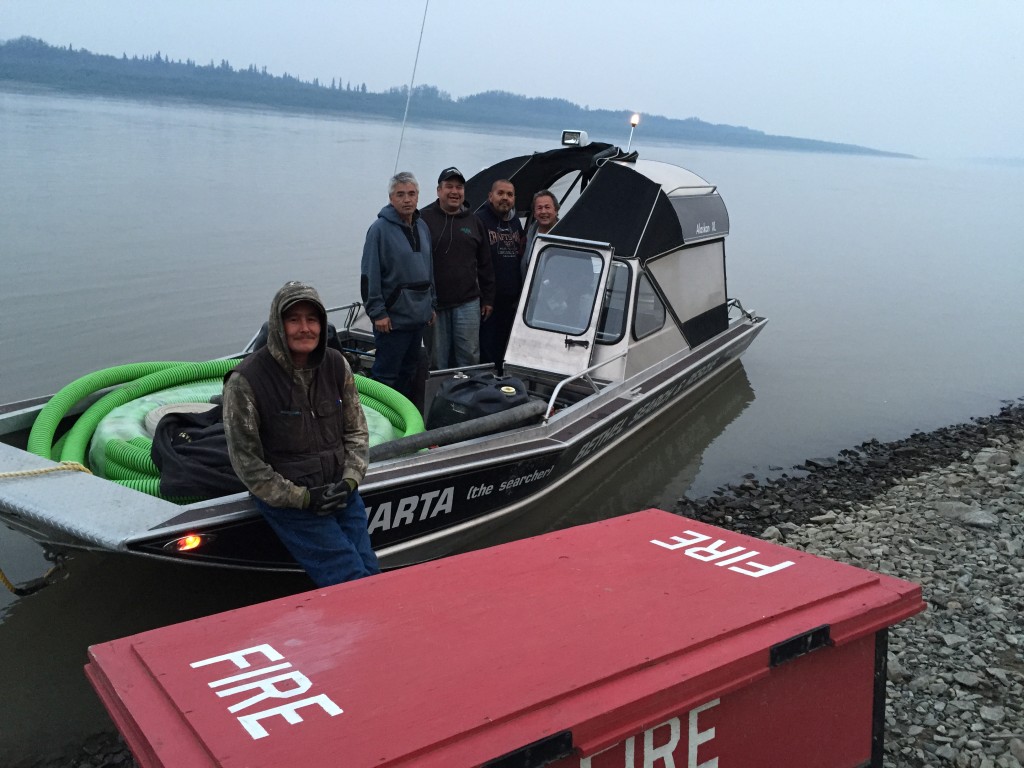 Napaimute was never in any immediate danger, although we endured several days of heavy smoke. With individual fires merging to the north, west, and east of us I believe that if the hot dry weather had continued our turn would have come. The weather moderated by July 4th and the fires calmed down no longer imposing a threat to any communities. They are however still burning and just today (July 10) with a little bit of warm sun and wind there was a flare up northwest of Aniak.

I was particularly worried about fire reaching the heavily timbered area behind the home site subdivision and dump. It would be hard to stop in that area of old growth timber and windfall.

On a side note we have not used the incinerator at the dump due to the hazardous fire conditions. Instead with permission we have been hauling trash to the Aniak dump when we go down on our weekly mail runs.

We will continue to keep a close eye on the fire situation in our region.

With the holiday falling on a Saturday and everyone in the mood for a good old fashioned Napaimute 4th of July, a few days were spent “sprucing up” Napaimute and preparing for the festivities. Audrey, Brianna, and Jeanette worked hard at cutting grass, cleaning buildings, and improving the overall appearance of everything. I really appreciated their work. They cleaned and cut areas that I would never think of!

Unfortunately the heavy smoke right up to the 4th caused many people to cancel their plans to attend the Napaimute 4th of July Celebration. There was however a good number of local people from Aniak and Chuathbaluk and it worked out well. There was just the right amount of kids for all the games. And even though it was a rainy day we had a lot of fun and of course a lot of good food – thanks to Shelly and the Girls for putting it all together. 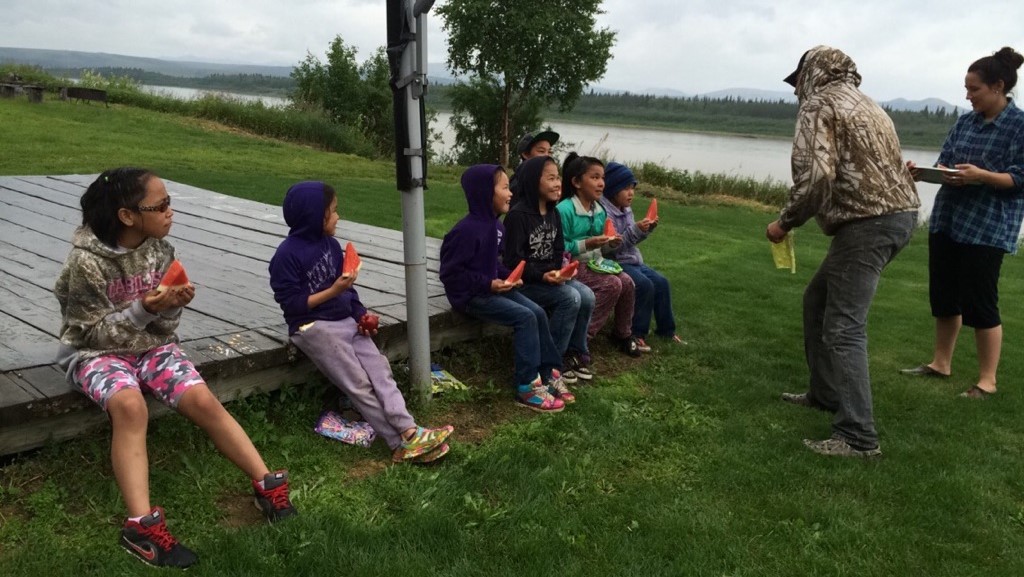 Watermelon Eating Contest: one of many games for kids & adults at Napaimute’s 4th of July Celebration

Between Fish and Fires it has been hard to focus on anything else but other accomplishments over the last few weeks include: 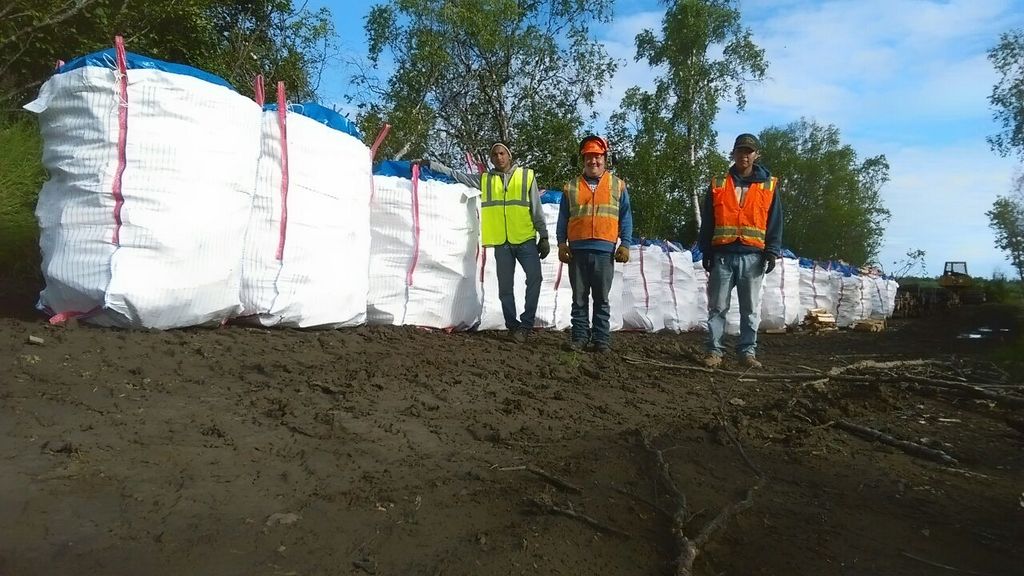 A three man crew of young guys has been steadily working at producing the additional 100 bags approved by the Council. As of this report they have just completed the 200th bag of the season. They have had to take several days off due to heavy smoke or fishing openings, otherwise they would have been done last week. They are now bundling the remaining left over pieces of round logs.

Nikolai Savage is the lead on this phase of our 2015 firewood production. He has worked for us through our summer youth employment program two previous summers and I felt he could handle being in charge of this relatively straightforward operation: processing the logs into chopped wood and bagging it.

He has done well and reports to me daily.

The crew also loaded the additional 40 bags for Chefornak Corporation on the barge completing their 160 bag order.

We have received the small grant award that we intend to use to restore the graves in the two Napaimute cemeteries.

A crew has been hired and some additional supplies ordered in preparation for beginning this project on July 13th. 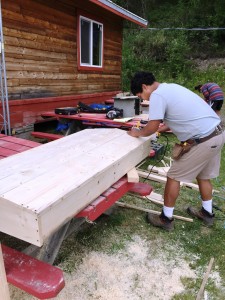 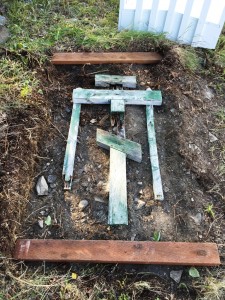 PIECES OF ORIGINAL GRAVE ARE PLACED UNDER THE NEW ONE 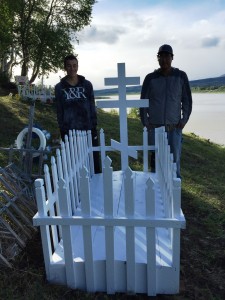 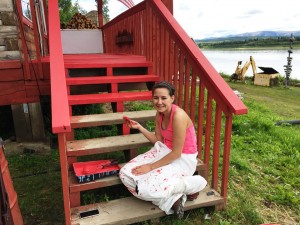 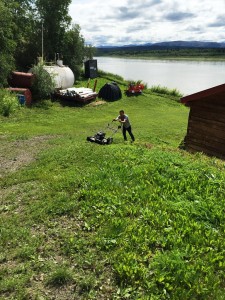 For the first time in many years a test fishery was operated at Aniak to determine how many salmon and what kinds were making it up past the 1000’s of fishers in the Lower River. This test fishery was operated by the Native Village of Napaimute under contract to the Alaska Department of Fish and Game. The information collected has proved to be invaluable in helping managers determine how and when People along the River could fish during these times of unprecedented conservation measures.

With the end of the Aniak Test Fishery, NVN personnel are now able to turn attention to a new fisheries-related project:

The Middle Kuskokwim Fish Wheel Project. Through Fisheries Disaster Relief Funding appropriated to our region by Congress, the Native Village of Napaimute has received an award to assist our neighboring villages with the construction and operation of additional fish wheels. After several weeks of planning and ordering supplies we are now beginning to implement this Project. Work on this will continue into the summer of 2016. 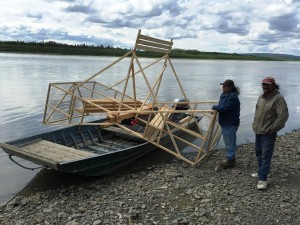