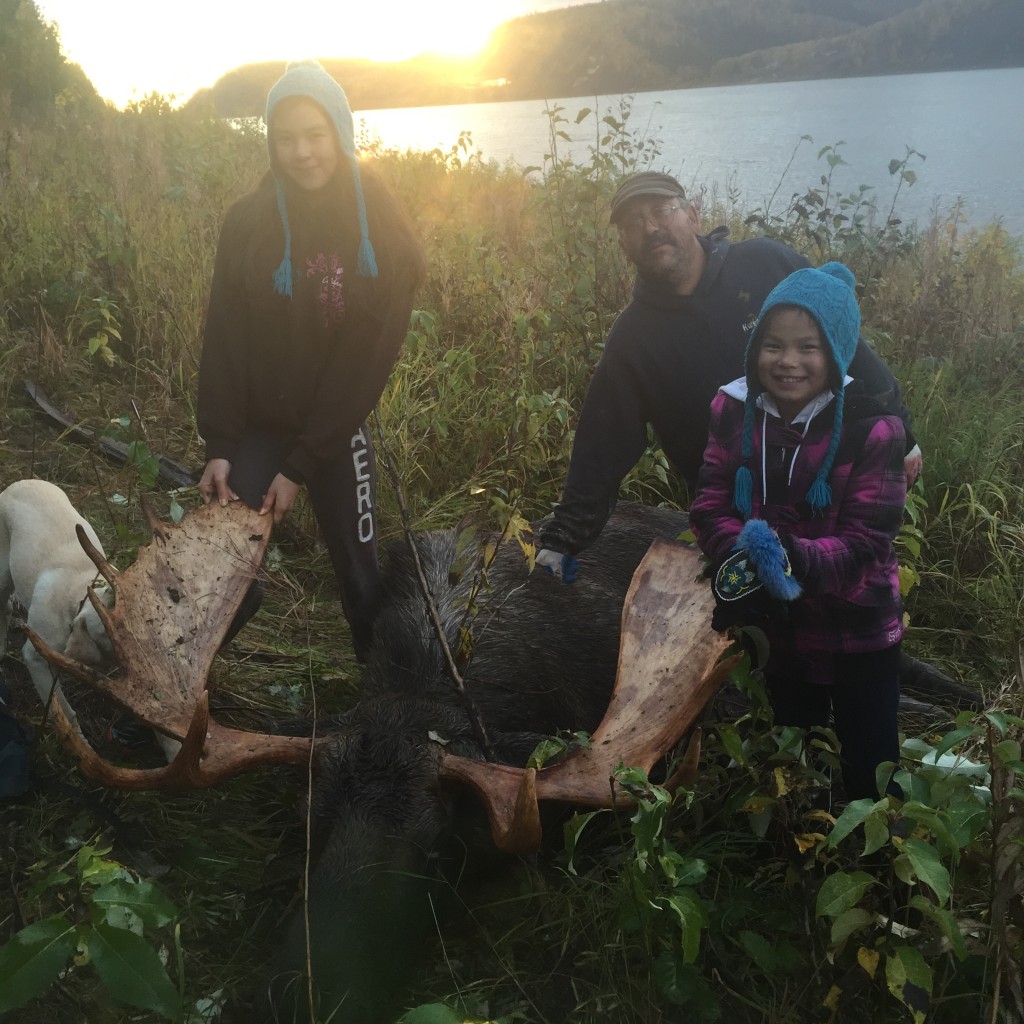 Just one of the many examples on social media of successful local families catching their moose: Eric Morgan & his daughters

The last week of August was a flurry of back to back Kuskokwim Subsistence Fishing Meetings that seemed like they would never end. Some, including myself were tired of what seemed to be an endlessly controversial, increasingly complex 2015 subsistence fishing season. Everyone along the River was eagerly awaiting the start of the September moose season.

This time of the year is just about as important to the People as the June King Salmon Season. Again this year lower river hunting traffic in our area was very light and the moose population in the Middle Kuskokwim appears to be strengthening.

Hunting success in the Napaimute area was better than it has been in recent years.

On August 24 and 25th as a representative of the Middle Kuskokwim I attended the Alaska State Board of Fish Kuskokwim Subsistence Salmon Panel meeting in Bethel. The outcome of this meeting is that the BOF is now considering a permit system for subsistence King Salmon fishing on the Kuskokwim. They will be working on this over the course of the winter and it may be a Board generated proposal for consideration at the regular BOF meeting in January. If this does happen it will be a very controversial issue in our region and one that will take much discussion and education among our communities. 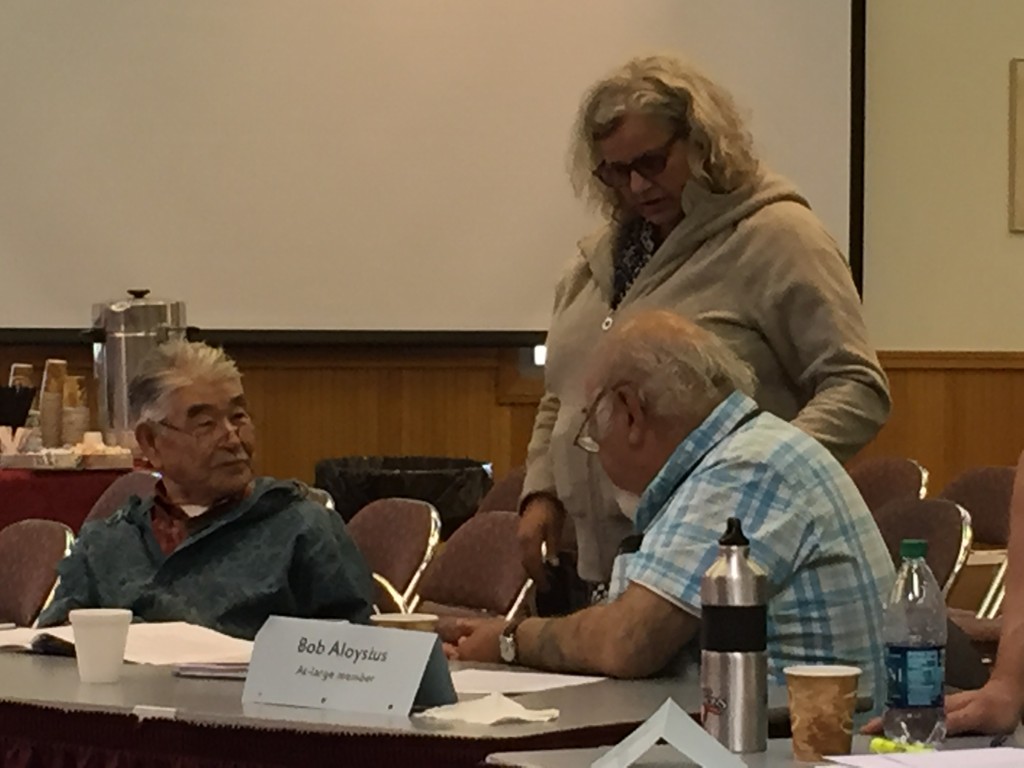 On Wednesday, August 26th, as NVN’s representative on the Kuskokwim River Inter-Tribal Fish Commission (KRITFC) I attended a meeting of the KRITFC Executive Board to participate in their negotiations with the U.S. Fish and Wildlife Service on a memorandum of understanding regarding a co-management demonstration project. This project had been previously announced by the U.S. Department of Interior at the 2014 AFN Convention.

Just a few days later after this August 26th meeting, President Obama announced funding for this very project during his visit to Alaska. 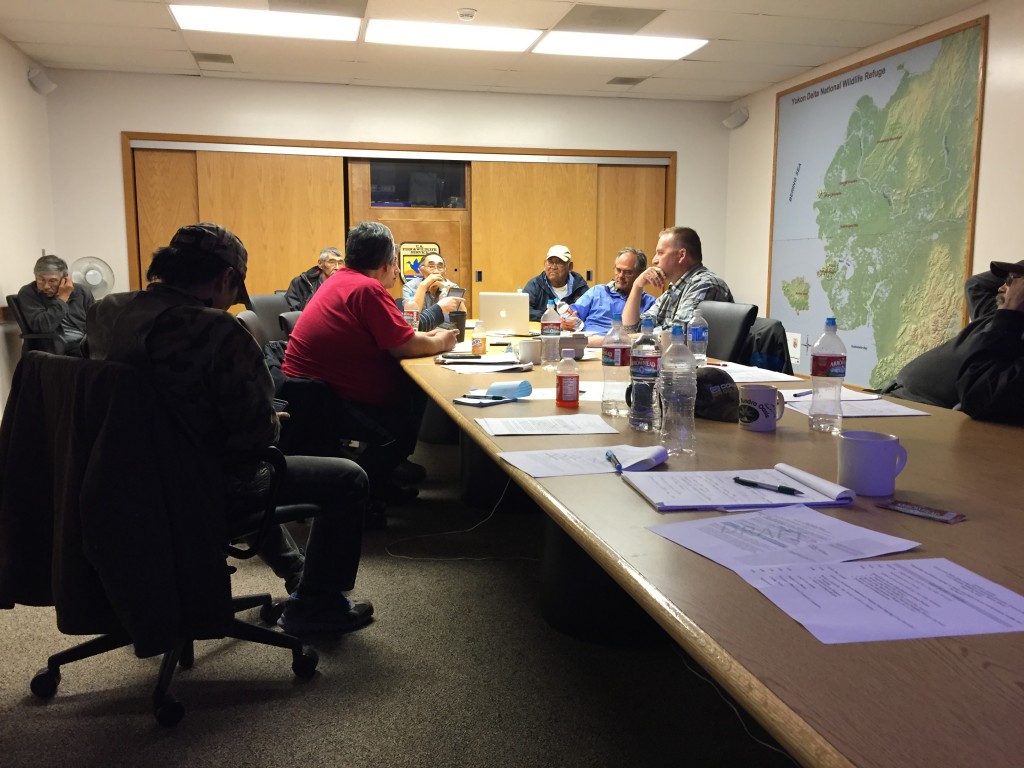 The next day I attended the last Kuskokwim River Salmon Management Working Group meeting of the season. After some concern over a very limited commercial fishing opportunity (just two short openings late in the) season) that was allowed by ADF&G on what appeared to be a low Silver salmon run, the numbers of fish had recently been picking up. In the days since, Silver escapement at all monitoring projects on Kuskokwim tributaries has been good – many even very high.

Previously I had supported the limited, very conservative commercial fish openings – maybe at the surprise of other Upriver KRSMWG representatives. I grew up with commercial fishing and even though our commercial fishery is just a fraction of what it used to be will always recognize the value it has to our limited economy. Now days all it really does is give People a little gas money for their fall subsistence activities.

For some unknown reason those Silvers came in very late this year. Proving once again – nobody really knows what the Fish are going to do! 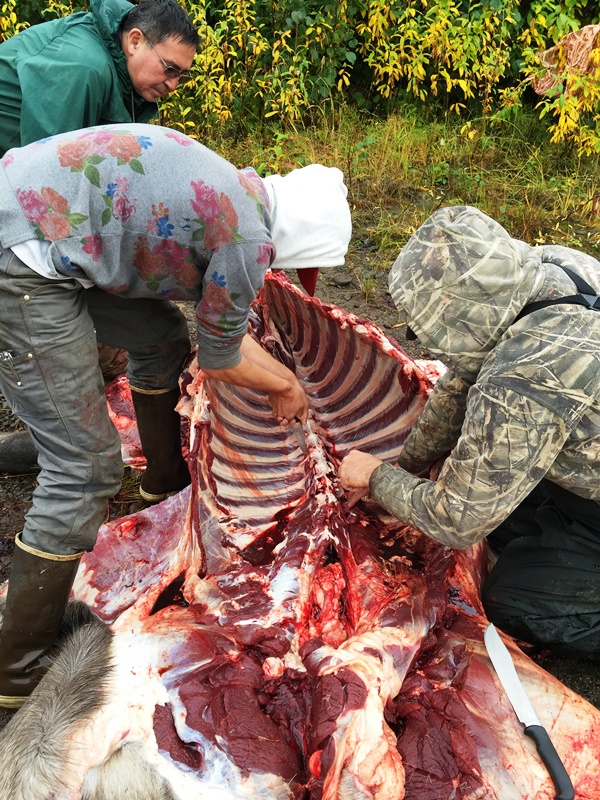 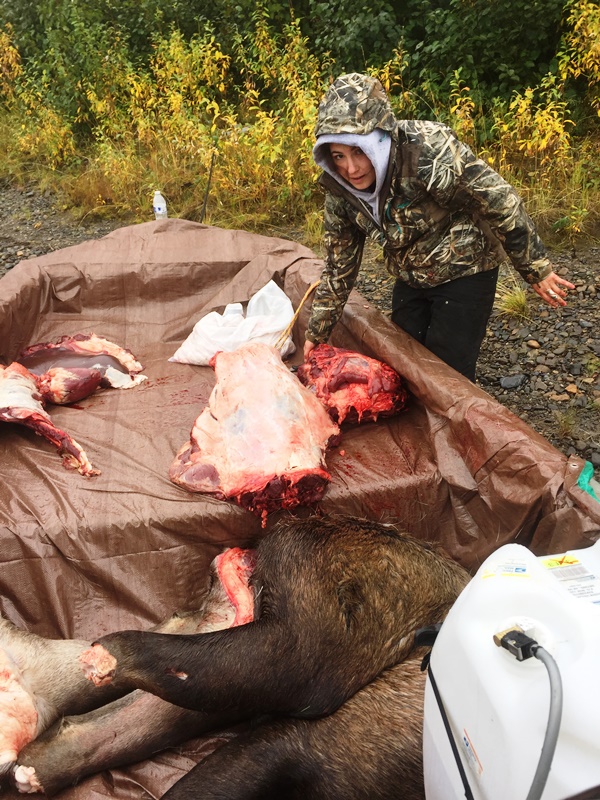 The Middle Kuskokwim from Kalskag to Georgetown is still under a Tier II permit system for our annual 20 day moose hunting season. The remainder of the region from above Georgetown to Stony River is completely closed to moose hunting. Hunters must apply for a permit to hunt in December of the previous year. Their applications are scored based on how they answer questions like how long have they been eating meat from this area, where do they buy most of their food, and where do they buy most of their gas. Those that score high are entered into a drawing for a limited number of permits. This year there was some controversy as many who have been receiving pemits in previous years did not get them for the 2015 season. This was because their were more applicants than usual.

One good thing about the Tier II permit system is that it has greatly reduced the hunting pressure from the large Lower Kuskokwim population. Most Middle Kuskokwim residents who are fotunate to be awarded permits are successful.

This is our only exerience with permit systems for the allocation of fish and game resources, but gives us things to think about when conisdering the cost/benefit of a permit system for King Salmon fishing. 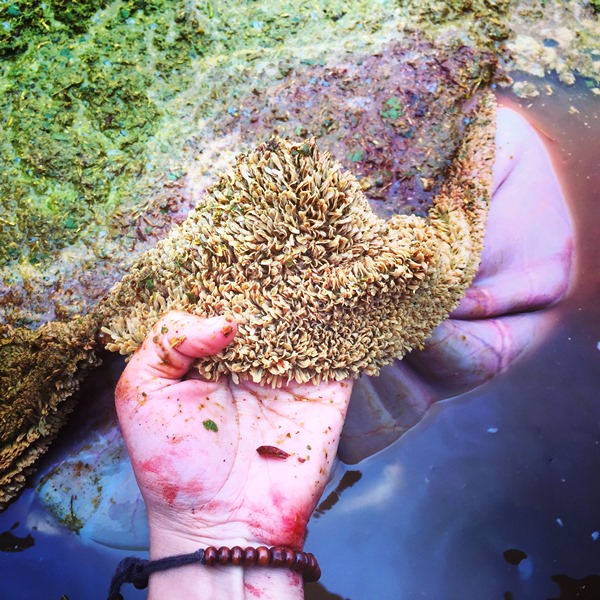 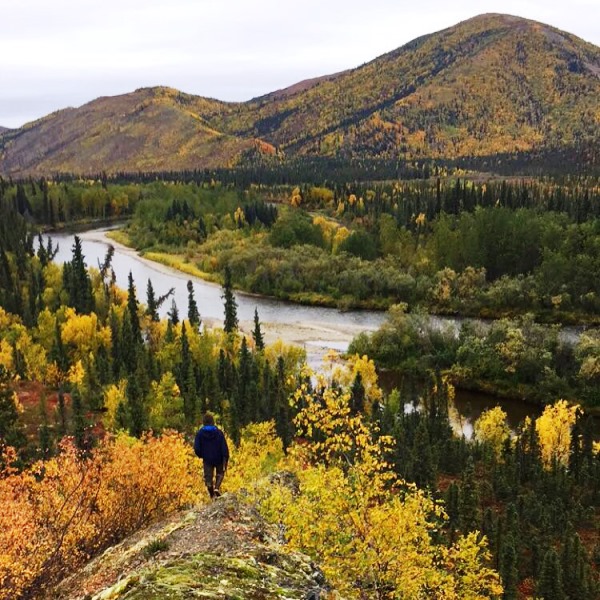 I took personal leave the first week of September to show my son and daughter some of my old hunting grounds near Kalskag and then continue hunting around Napaimute. It was a good week. 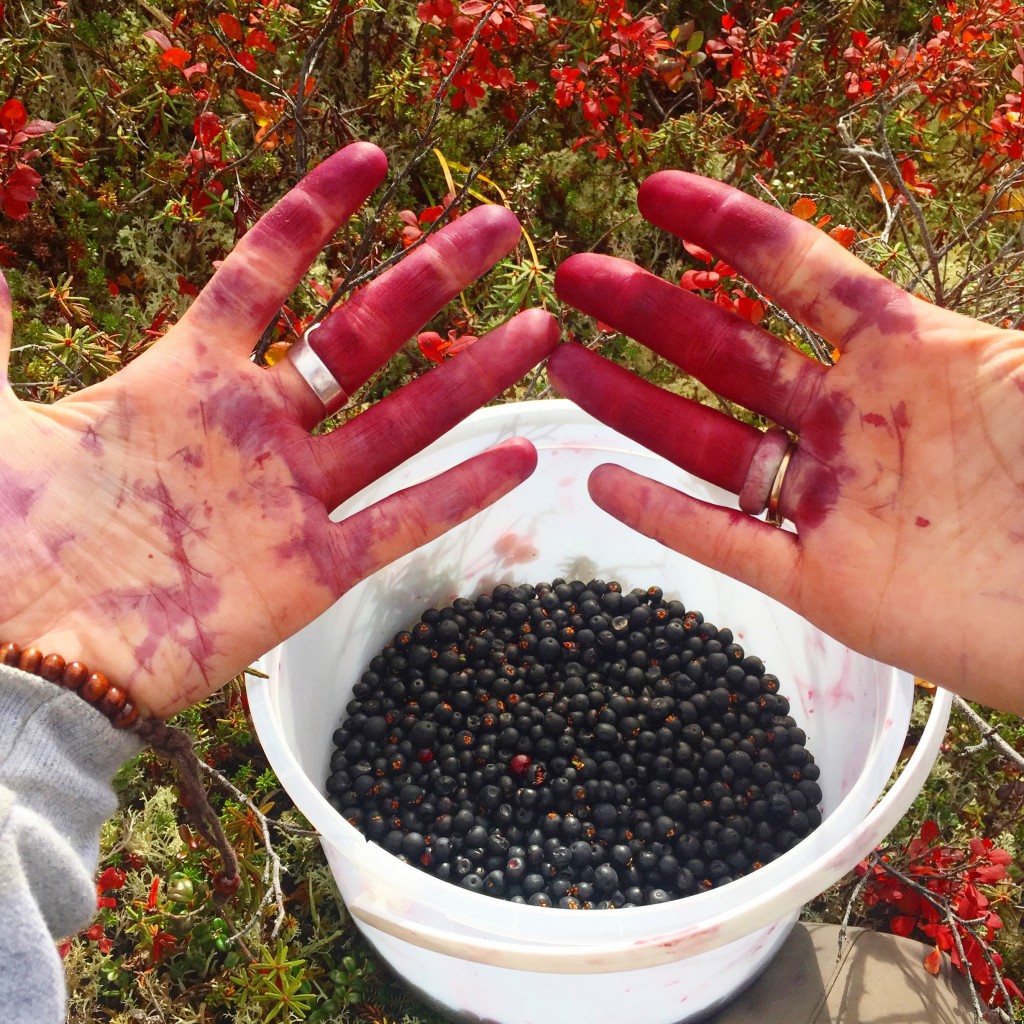 While looking for moose, other subsistence foods are gathered too (photo courtesy of Audrey Leary)

Our fish wheel project crew spent a week gathering driftwood logs for the project. Their search for the right kind of logs took them as far as Sleetmute. They rafted the logs to Napaimute where we pulled them out and stored them for the winter. The project will resume in the spring. Currently I am working on the reimbursement request to the Pacific Marine Fisheries Commission for the expenses to date. 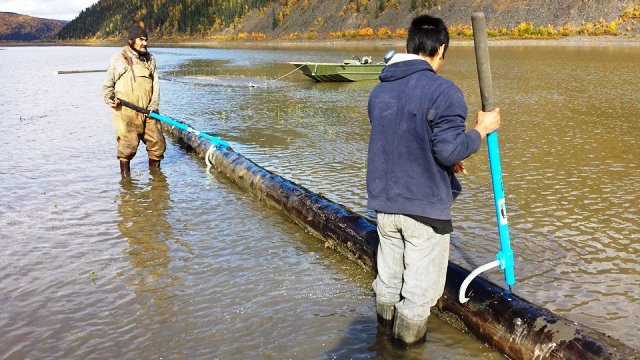 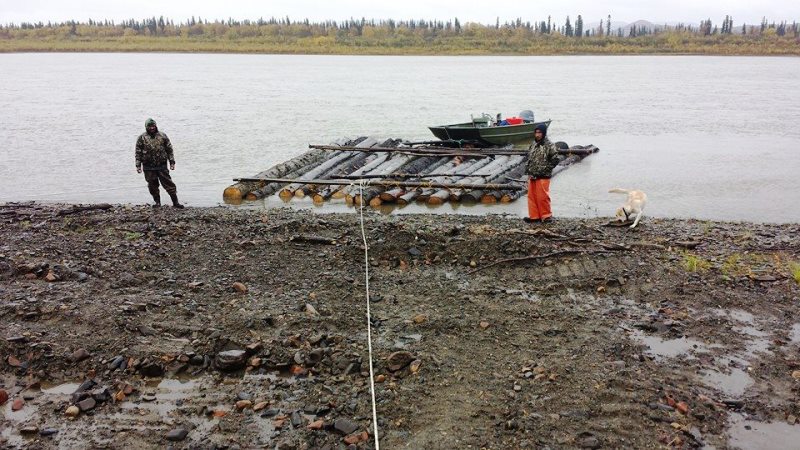 The last fuel barge of the season is currently enroute for Sleetmute and our wood is booked for transport on their return to Bethel. This is estimated to be late in the week of September 21st. We have a long and growing list of waiting customers.

The Kuskokwim Corporation and Natural Resource Conservation Service Foresters are scheduled to visit our timber harvest site below Kalskag on September 28th. This is right before the AVCP Convention so I will be making a long day trip with the foresters in order to be back in Bethel for the convention which starts the next day.

That’s the report for this month.