Final Review of Kuskokwim River Board of Fish Proposals and Advisory Groups Recommendations.

Now that all the Kuskokwim Advisory Groups have weighed in on the fisheries proposal I am providing a brief summary on key fisheries regulatory proposals that will be before the State Board of Fish (BOF) for their consideration to be adopted into state regulations in 2016. Again, these regulations will have far reaching consequences for the people and fisheries resources in our region, if adopted. These proposals not only address the how and when State Managers should conduct fisheries, they also establish management objectives. We strongly encourage all fishermen to become involved. The text of the full proposals, ADF&G staff comments, and guideline for submitting comments to the BOF are available at the BOF website:  http://www.adfg.alaska.gov/index.cfm?adfg=fisheriesboard.main.

92 – Modify the Kuskokwim River Salmon Management Plan to manage the king salmon subsistence fishery based on the Bethel Test Fishery.

96 – Separate the amounts necessary for subsistence use of king salmon into three parts on the Kuskokwim River.

97 – Create a permitting system for king salmon subsistence fishing in the Kuskokwim River.

A summary of the positions on key proposals by state sponsored fisheries Advisory Groups is provided in Table 1. The Advisory Committees (AC) and the Kuskokwim River Salmon Management Working Group (WG) represent different segments of the Kuskokwim River and various interest groups, they are: the Lower Kuskokwim AC (LKAC), Bethel AC (BAC), the Kuskokwim River Salmon Management Working Group (KRSMWG or WG), the Central Kuskokwim AC (CKAC), and the Stony Holitna AC (SHAC). These Advisory Groups have been reviewing and developing recommendation on Kuskokwim fisheries proposal for consideration by the BOF at their January 12th meeting in Fairbanks. These proposals, if adopted will have a significant impact on how fisheries are managed on the Kuskokwim in the coming years. I have briefly summarized the positions of each Advisory Group, and ADF&G Staff’s preliminary positions on key proposal in the table below. This summary is based on my personal notes from each meeting; I apologize in advance for any discrepancy.

* ND = Not Discussed or Information not available, will be updated once it becomes available. ** Preliminary remarks by ADF&G, final position will be made available prior to BOF meeting. *** Information from KYUK website.

Proposal 92-94: In general, all of the Advisory Groups supported these proposals, or chose not to weigh in on them.  This suggests to me that all groups recognized the issues identified in the proposals and are seeking a management option to resolve them. ADF&G (Department) questions the feasibility of implementing these proposals (as stated) due to technical challenges with the data; they remain neutral on all allocative aspects of the proposal. Interestingly, AF&G does offer a preferred approach to address the issues raised by the proposals in their comments, see highlighted text below. 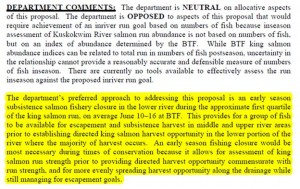 This proposed approach by Department could potentially achieve the “intent” of proposal 92-94, and according to them is technically feasible.  An area of concern however would be the lack of a “codified” objective (something written into the Management Plan) that would direct ADF&G to implement this solution, and under what conditions they would do so.

Proposal 95: The Advisory Groups were united in their lack of support to establish a Tier II permitting system for Chinook Salmon. The Department remains neutral on the allocative aspects of this proposal.

Proposals 96-222: Support was mixed between the various Advisory Groups or they were not discussed. Those groups that supported the permit proposals had a preference for proposal 222 which they provide amendments to. The precise language of the various amendments is in draft and will in all likelihood not be available until the BOF meeting for public review. The Department remains neutral on the allocative aspects of these proposals, but does support the intent of the proposals requesting a permit system be put in place.

The BOF will be taking written comments (less than 5 double sided sheets) up until the meeting date, see the BOF website on how to submit your comments. You may also contact Napaimute at: napaimute@gci.net if you wish assistance.