2016 Kuskokwim Break Up – Earliest on Record: The Life in the Ice (reprint from the Delta Discovery) 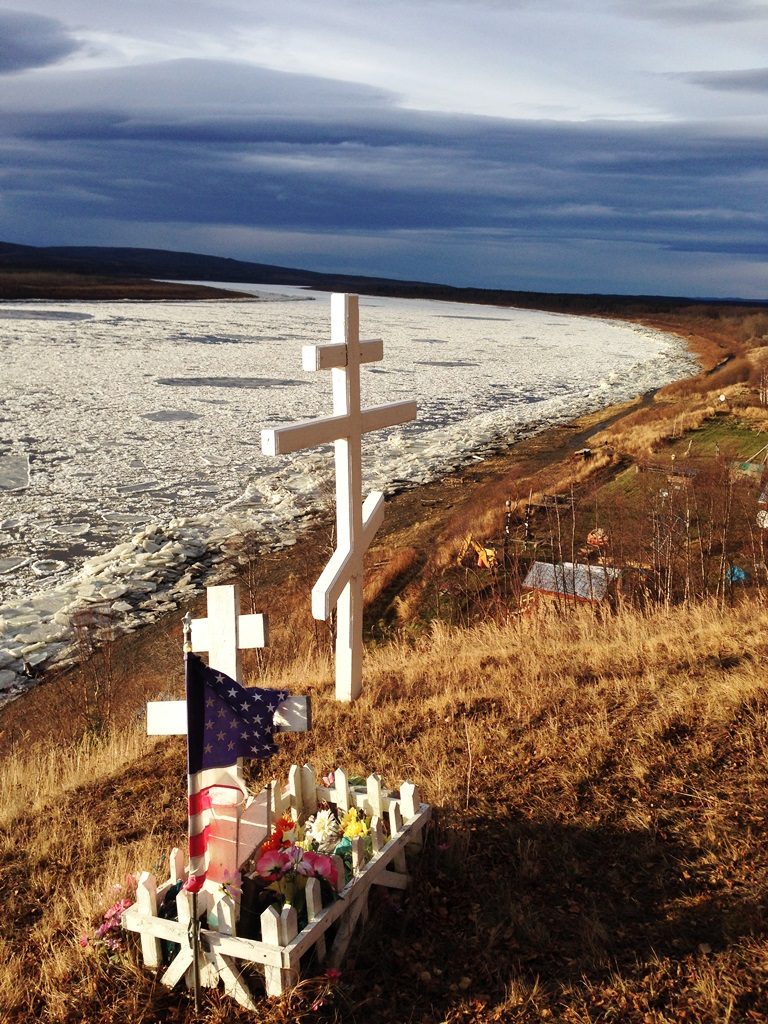 The Life in the Ice

It was a cold, clear, calm night in the Middle Kuskokwim. I sat there alone cooling off in the dark porch of the maqivik listening to the talk….but the talk wasn’t coming from People.

Sharp cracks. Loud booms. Low rumbling. Echoes in the stillness against the hills and up into the valleys. Sometimes it sounded like furniture being moved in an upstairs room or even distant thunder on a summer evening. All along the River in front of me, down around the bend, and up above at the islands the Ice was talking.

Even though I was the only person around for miles, I didn’t feel alone. There’s life in that Ice I thought to myself. I sat there and kept listening to the story – figuring out the language.

The Ice was growing thicker and the water that it’s born from was getting lower. As water freezes it expands outgrowing the River’s cradle while at the same time with the water dropping its bed is getting smaller. That’s where all the cracking, groaning, and rumbling comes from – growing pains.

It sounds scary, but really the noise is comforting – reassuring – the Ice is getting thicker – safer.

Each year we watch the life of the Ice. We witness its conception, celebrate its birth, enjoy its maturity, and then rejoice in its death.

The Conception: In the fall we watch the water in the River get thicker. We see the mud puddles freeze, then the lakes freeze, then we start to see a little Ice along the shore, and the sloughs and calmer areas freeze. In the clear water tributaries we see Ice forming on the bottom around rocks and branches. Some of it popping loose, rising to the surface and flowing downstream – getting thicker each day if the temperatures are right.

The Birth: I remember watching the Ice form in the main River years go on a moonlit mid-October night as we were coming down with the barge. It was in that long stretch between Terry Hoffman’s fish camp and Carl Morgan’s.

The water was very thick. Then suddenly Ice started forming like thin spider webs across the calm surface. It was amazing to watch. We tied up to rest along the cut bank right above Carl Morgan’s. During the night you could hear the Ice thickening and hitting the side of the barge with increasing loudness. By day light those spider webs of Ice had turned into 1” thick sheets. The Ice was born!

The Ice in the Lower River stops first – there’s less current and when the tide comes in the current slacks off to nothing making it easier for Ice to be born.

Once the Lower River freezes up the Ice coming down from upriver starts backing up – usually from somewhere below Akiak. Sometimes the flowing Ice can run for a month, but in a good year maybe just a couple of weeks. Slowly back filling its way up the River. In some narrow, shallow parts the Ice sheets will jam leaving long stretches of open water below that can remain open throughout the winter.

The Upper end of Kuskokwaq, Coffee’s bend, and Birch Tree Crossing are common places for this – but not always. Sometimes the open holes are in places we haven’t seen before. And sometimes these famous open spots are frozen up tight.

If the temperatures are cold the sheets of Ice grow each day and the shore Ice builds out. In some parts of the River you can safely travel on the shore Ice for miles while the main channel is still running. At Napaimute we can travel 20 miles down to Chuathbaluk on the shore Ice in a good year.

As the Ice stops the water raises filling in some of the roughness especially along the shore. As the running Ice packs in its like break up in reverse. The running Ice slows down, finally stops, but then shifts around again packing in tighter before finally coming to rest for the winter. Listening to stories from our Elders we learn that in the right temperatures you can cross the River on the same or next day – checking ahead of you with an ice pick. It’s true I’ve done it at Napaimute even with 10 open holes with in sight. That Ice packs in tight and is safe to walk on. But you have to have that Ice pick out there in front of you! I always tell my kids that my Ice pick is one of my most valuable possessions.

Maturity: As the Ice fills in the Kuskokwim we begin venturing out on it. A little bit out from each community – manaqing, setting nets, taluyaqs, or traps. Those that are out on the ice early are observing what’s going on and understand when they can venture further. The trails start radiating out, getting longer and longer as the Ice grows. Eventually we are all connected again and the winter traveling season opens up. It’s a great time of the year. Crews mark trails and open water. At first these are just snow machine and ATV trails. But with thickening Ice and some warm spells to smoothen the Ice they eventually become a network of Ice roads for trucks. In 2016 we had over 250 miles of truck road on the Ice of the Kuskokwim River – from the Johnson River Villages to Crooked Creek.

We spend the next several months enjoying the nice hard platform that the Ice has given us. I think the travel we do on the Kuskokwim River in winter rivals some of Alaska’s major highways. With safe trails and ice roads established we are probably the most mobile, social people there are. I always wonder when they say we are “remote and isolated” From who? Certainly not from ourselves. Thousands of Kuskokwim River People move everyday over the Ice for: meetings, fiddling, dog races, carnivals, funerals, basketball games, medical appointments, shopping, getting wood, subsistence activities, and many other reasons. I counted over 70 trucks manaqing at the mouth of Johnson River one nice day in March!

While we enjoy these good months of winter travel, the life in the Ice is maturing – growing up – and we are watching it. We share our observations with other travelers up and down the River.

Even in these mild winters we’ve been having the Ice thickens – though not like it did in previous years. And the water level in the River drops bringing the Ice down along with it.

We watch this and adjust the way we travel accordingly. I always tell people that ask me about the channel:

In some parts of the River the dropping Ice breaks away from the banks and sandbars leaving dangerous open water long before the spring break up starts. In other areas even though there’s a thick layer of Ice the current continues to eat away at the cut banks leaving hollow areas underneath where the Ice eventually falls down leaving open water. In other parts of the River where there are swift channels with broad shallow areas downstream, the thickening and dropping Ice can cause a restriction in the River flow building up pressure that eventually blows out the channel even though the Ice is nearly 3 feet thick! This happened at Aniak and Napaimute this winter.

These are some of the things to be aware of while traveling on the frozen River. That’s the Life in the Ice -it’s always changing.

Like Took says “The River changes every day”. And if you’re on it enough you’ll see the changes. Sometimes the day to day changes are very small: the Ice dropped just a little more. The Ice got just a little thicker. Those snow drifts got a little taller or longer.

The Death: Sometimes the changes are great and fast – in less than an hour with warm temperatures, wind, rain, and tide the overflow can be much deeper than it was. Or in the spring with hot weather, strong current, and a little sand the Ice can be much more rotten.

Or a part of the River that was flooded with overflow from bank to bank can be dry a few hours later if the water finds a place to drain through and the main Ice decides to lift up.

There are the signs that the Ice is tired. It starts to get sick and slowly die. Each day it lifts up a little higher. Each day it gets a little darker. Each day open water takes up more room along the edges, eventually breaking the shore Ice free from the main channel Ice. Once the main Ice is floating free the end of its life is imminent. But just like our own lives we don’t know exactly when it will end. That’s why I don’t buy Ice classic tickets. I know that the River is smarter than me and I don’t feel like I should try to play like I’m smarter.

But eventually the Ice breaks up, moves out and dies.

Sometimes its death is fast and violent threatening every living thing along the River bank. After a bad break up the land beyond the River can be flooded for miles and miles – all the way out into the tundra. Every kind of drowned animal can be seen from moose and bears all the way down to rabbits and mice. We once saw a drowned moose hanging by its neck way up in the fork of a tree. That time there were many more moose still alive laying or standing on stranded sheets of ice waiting for the land to drain. There was no place else for them to go.

Sometimes its life ends slowly and quietly mostly melting out in a reincarnation of the water it was born from. Maybe that’s what’s happening this year.

We rejoice in the death of the Ice, the new freedom of the open water, and all the good things the summer season along the River has to offer.

I love being on the River and especially on the Ice. There’s Life in the Ice.

I guess it comes from a combination of listening to the People who lived in the dog team days tell stories about traveling on the Ice, over a quarter of a century of watching freeze ups and break ups in Napaimute where the River is right there in front of you all day long every day, or maybe just from a lifetime of living and working on the River. There’s still much to see and learn. Different things every day and every year is different in some ways. 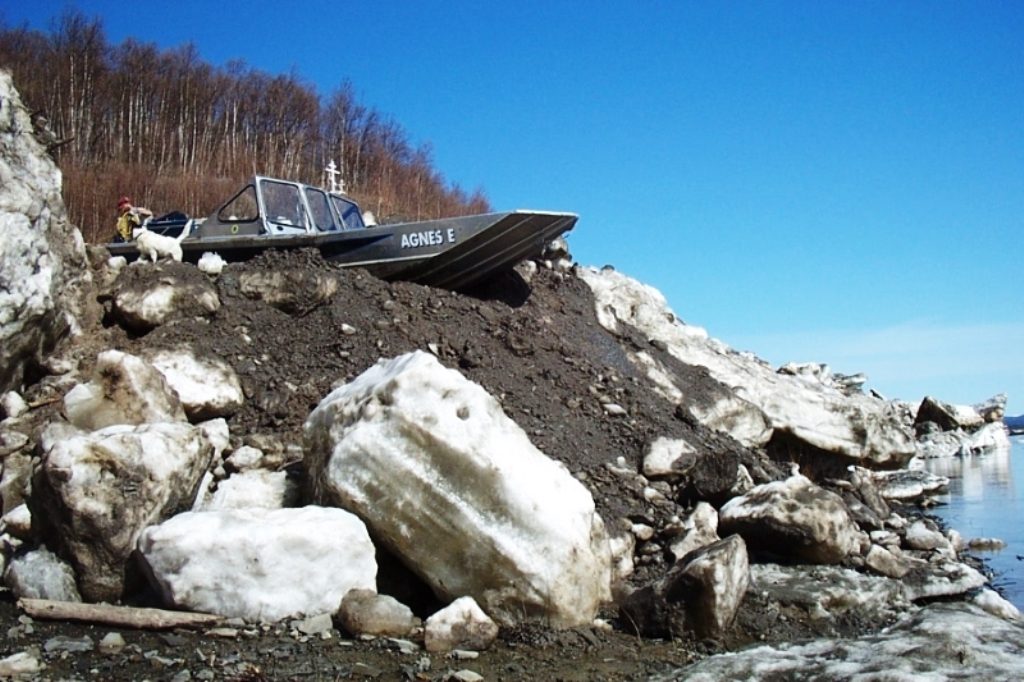 Getting a boat in the water after a bad break up can be challenging. This was Napaimute in 2004.