Nova Gold recently made the announcement that they, along with Barrick, would soon be submitting the Permit Application to the State of Alaska to move the Donlin Gold project forward to the next stage.  It’s anyone’s guess just how long the permitting process will take, but being such a large project it could possibly take four years or more.  In the announcement it’s stated that the construction phase would employ 2,000 people while the operating mine would employ between 500 and 800 for over twenty years.

We’ve all seen how Donlin Gold has strived to hire locally, and the mine will no doubt employ many people up and down the Kuskokwim as well as friends and family from over on the Yukon.  But a workforce that large will also bring workers from afar – not that that’s bad; it’ll just be more people, some of which will likely compete for subsistence resources.  Unfortunately, some of those resources may be on the decline.  Think back to this past summer that was the second poorest return on record for Chinook salmon – last year being the worst.  Remember those controversial closures down river?  Keep in mind that Bethel is not getting any smaller, either.

You can’t expect that many more people inhabiting and traveling in a relatively small area and not change the complexion of the region.  Change will come.  Another form of change, climate change, is just one other uncertainty that may influence the salmon runs…and not in a positive way.

There’s a lot of economic benefit from such a project; no one can deny that.  And some social workers, as well as a local magistrate, have told me that they’ve seen a decline in some of the more common social problems that exist in the region…and that’s great.  Yes, certain benefits are a given.

But as the cliché goes, there are no free lunches.  Something I’ve witnessed is the glossing over of the project’s potential environmental impacts and attempts to stifle those who have expressed concern for the project at several local gatherings.  Whether for the Donlin project or the controversial Pebble project in Bristol Bay, mining proponents have repeatedly stated that critics should not express their concerns until the permits are applied for and the specifics are known.  That sounds reasonable…at least on the surface until one digs a little deeper (I guess that pun was intended).

For many years both Donlin and Pebble ads have routinely attempted to allay any fears that such proposed development might induce.  The following quote is from Pebble’s CEO, Bruce Jenkins, in a letter addressed directly to me back in 2007.  I have no idea how he got my name, other than I wrote a letter to the editor of the Anchorage Daily News several months prior to receiving his letter.  Here’s what Mr. Jenkins had to say, “This may seem like a lot of work and a long timeline, but the Pebble Project wouldn’t do it any other way.  The time we’re taking now to gather information about land, water fish and wildlife resources in the Bristol Bay area will ensure that we can protect these important environmental values and traditional ways of life in the future.”

Just look in any of the recent Delta Discovery editions and you’ll find similar propaganda.  Each week something like the following appears, “Once Donlin Gold removes all equipment and buildings during reclamation, nearby streams and land will be monitored for years to ensure the environmental integrity of the region.”

You can insure just about anything these days, especially through Lloyd’s of London for the right amount of money, but there are very few things in life that anyone can ensure…especially water quality when you have such large-scale land disturbance associated with surface and ground waters.

I’ve collected a lot of baseline information over the years in places like Idaho and Wyoming, and quite often the best it can do is only provide us with something to lament over.  I’m not opposed to economic opportunities for people of the region and certainly not for providing for one’s family; everyone just needs to understand that there will be trade-offs.

My biggest concern for the development of the Donlin Creek project, however, goes beyond that mine itself.  Because the Donlin project is so large, much of the currently non-existent infrastructure will be in place which would then allow less economically feasible operations to be much more viable.

I’m sure you’re aware that there’s been a substantial amount of exploration throughout the Kuskokwim including the Holitna, Holukuk and Aniak drainages, just to name a few.  I don’t need to tell you that the Aniak and the Holitna are the two biggest producers of salmon in the Kuskokwim.   The more activities that occur Kuskokwim wide, the more potential there is for individual mishaps and overall cumulative effects to occur.  That’s just a given.

I’ve done my best over the years to maintain my objectivity over the Donlin project, even to the consternation of some local “environmentalists”.  But issues need to be addressed and people must know that just because there will soon be an extensive Environmental Impact Statement (or study) conducted, that doesn’t mean that there won’t be any significant impacts.

Am I alone as a concerned biologist over such things?  Not hardly.

Why would thirty-six highly regarded scientists write to British Columbia’s highest official expressing concern?  It’s because of the inherent consequences associated with any large-scale development, especially the cumulative effects.

Are we here in the Kuskokwim anywhere near that level of development?  No, not hardly…but not yet, anyway.  All I want is for the people of this region to make informed decisions and not be duped by the bombardment of assurances with terms like ensure.

I’ll go back to the Delta Discovery once again to an advertisement that was placed three years ago following the unsuccessful and highly controversial Ballot Measure #4 that opposed large-scale mining.  Personally, I did not vote for the measure for various reasons, but I cannot agree with the full-page ad that said, “Guyana for your No votes on Prop 4.  Clean water, fish and prosperity – we can have it all.”

Once again – THERE ARE NO FREE LUNCHES. 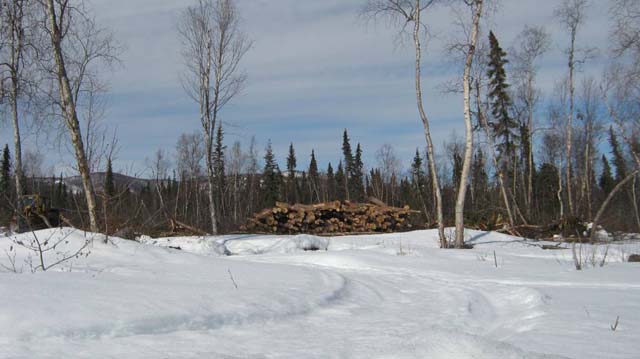 “Starting  the 3rd Week & going over the hump”

Since our last report we have worked two weeks of twelve hour days and are going into a third week with deteriorating harvest conditions. Daytime temperatures are into the 50’s. It’s getting wet and sloppy – both on the River and in the woods. Thankfully, we are still getting a good freeze at night. My own days (Mark Leary) have begun at 6:30 AM making coffee, then breakfast for the crew by 8. They are on the job site by 9 AM. I use the late morning hours to do administrative work and chores to keep up the camp (wood, water, dishes, etc.). By 1 or 2 PM I bring a hot lunch to the crew at the harvest site then spend the rest of the afternoon helping out where needed. At 7 PM I come back up to start dinner. The crew comes up by 9 PM and we eat by 10. Then a little cleaning up, talking about how the day went, planning for the next, and off to bed.
The week of April 2nd our harvest went slow in the initial harvest area downstream of the dump road. The timber in this area was small, but we got what we could out of it and the stockpiles slowly grew. We all agreed that with the time remaining our focus should be getting the timber out of the woods and worry about bundling later in the spring. With this in mind, the timber was brought out full length first. Finding 40’ to 60’ trees hard to handle at times, we started having the harvester operator cut them in 24’ lengths so they can later be cut in half for the 12’ lengths the customer wants. 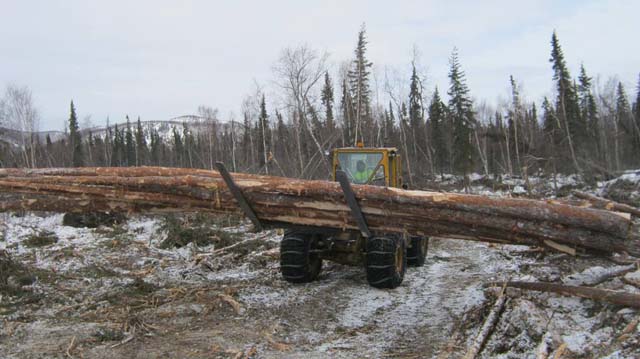 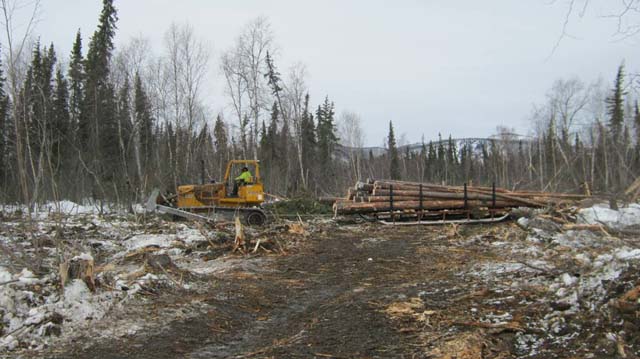 As the harvest area moves farther away the dozer skids out loads of timber.... 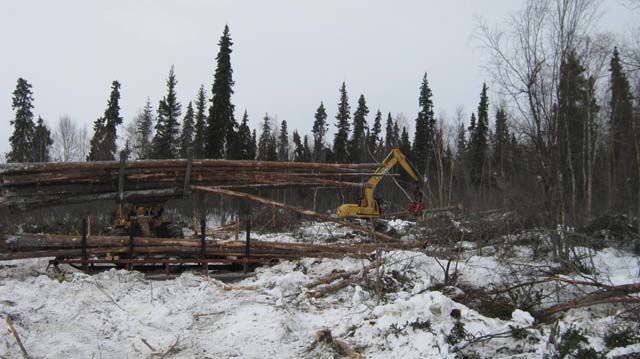 ...while another is being loaded 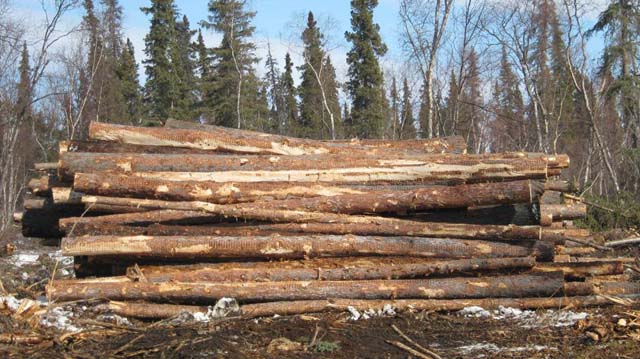 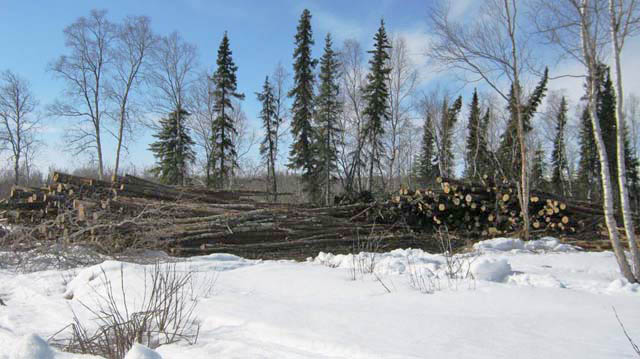 Early into the week of April 9th we finally started getting to the area of big timber that we always knew was there, but the windfall is terrible. One thing that NRCS Forester was right about: we lost 50% of our timber since 2009 and they’re all big trees. Getting the windfall out with the harvester isn’t efficient right now. The trees are a tangled mess buried under the snow and many are frozen in. The harvester operator takes what windfall he can – the ones that aren’t too difficult to get out. Otherwise he can get three or four standing trees during the time it takes to get one tough windfall.  The rest of the windfall will have to wait. It’s almost heartbreaking to see all of this wood blown down. If we had been doing this project prior to 2009 we would be rolling in wood! 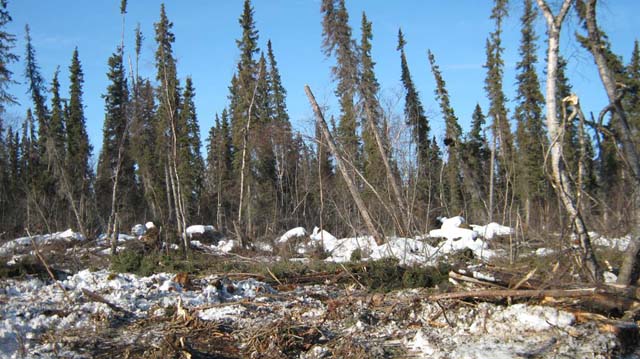 Hard to tell if you don't know what you're looking at, but all the big snow covered lumps are windblown trees Notice that many of the standing trees are leaning over as well.

Even with bigger, better timber the going is somewhat slow. With the majority of windfall being in-accessible at this time, volume is lower. On a good day we get 40 cords out. At this time we don’t know exactly how much we have. For the first week the computer wasn’t working right so we don’t have record of what was harvested. It has since been fixed, but it is always records lower than what we know the skids hold when fully loaded.

At the end of each day we try to calculate what has been harvested.  This is the most wood we’ve ever seen stockpiled in our region! If all goes well I believe we will be past the halfway point by the end of this week. When the wood is bundled we will get an accurate volume number.

The Waratah Man Comes to Town:

As promised at the training we attended at the Waratah dealership in Washington, Mr. Alan Waldman came to give us a hand on April 10th. Waratah is the manufacturer of the harvester head. 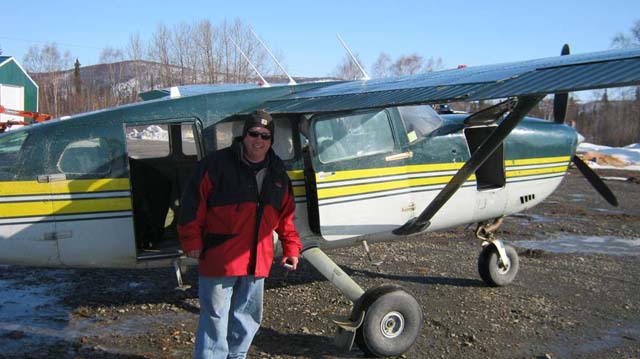 Alan spent three days with us, first fixing the computer, then observing and helping improve our harvest methods. He also worked with the guys on maintenance and minor repair issues with the harvester attachment. His time here was very valuable for us and it looked like he enjoyed it as well. 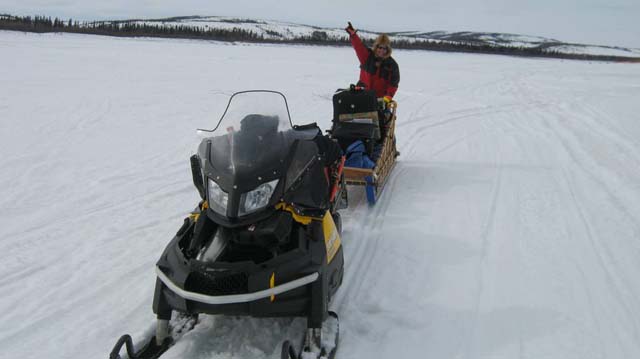 Catching a ride from the airfield 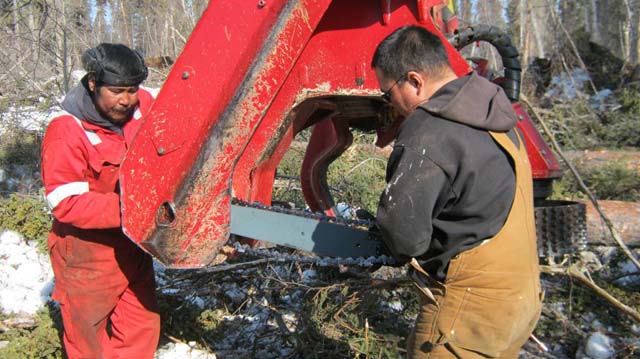 Putting on a new chain

No complaints with the harvester machine its self. It is doing what we thought it could do and has worked well. There is a little down time each day for maintenance or the occasional thrown or broken chain, but overall it was the right machine for the job. Fuel consumption is good – 1/2 a tank per good long day. The volume we have to date wouldn’t have been possible without this machine. 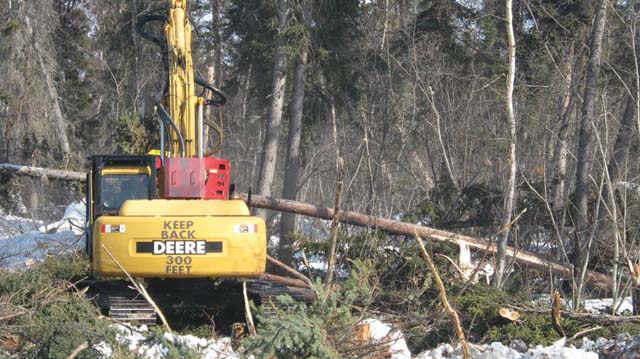 Where do we go from here?

We’ve been working hard to accomplish something that’s never been done in our region before – a large-scale timber harvest. We picked a tough year to do it in: above normal snow depth and extended cold. Our start-up expenses have been high, but we have the best crew available and once the actual harvest got started it has gone well – just a little slower than planned.

We will ge the quantity the customer wants eventually. So at the end of this week will will take a break to let the country finish thawing and drying out. We will resume the harvest late in May.