At least six tribes or native organizations submitted special action requests to the Federal Subsistence Board with the hopes that the Board would ensure that a reasonable opportunity was given for people in the middle and upper Kuskokwim to harvest adequate silver salmon since many families still have not met their subsistence needs to get them through the long winter.  ADF&G had held three commercial fishing periods as the chum salmon were winding down and the silver salmon just beginning to build.  Some residents were still going after the chums while many are expecting to harvest many more silvers than they normally do to fill the void left from the unprecedented restrictions on king salmon.

Here is a Dept. of Interior press release and an AK Dispatch article discussing the Services actions on the Special Action requests: 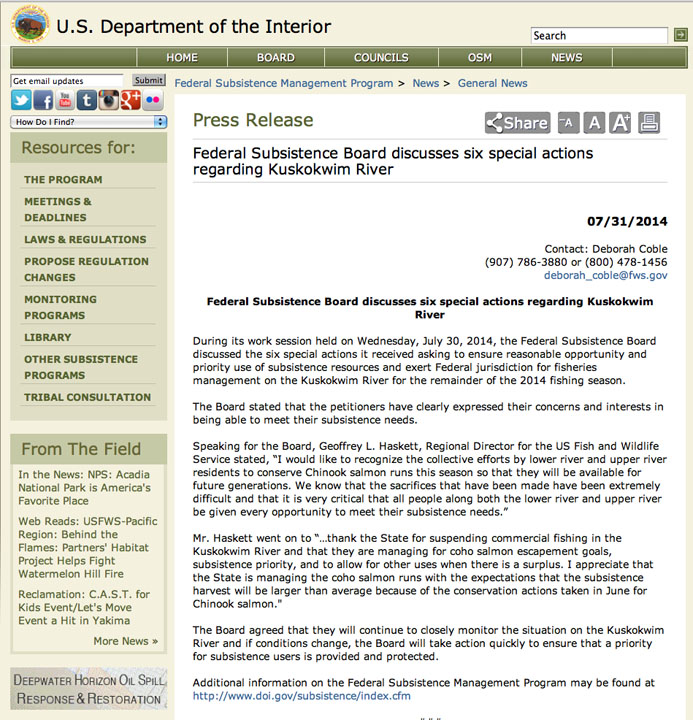 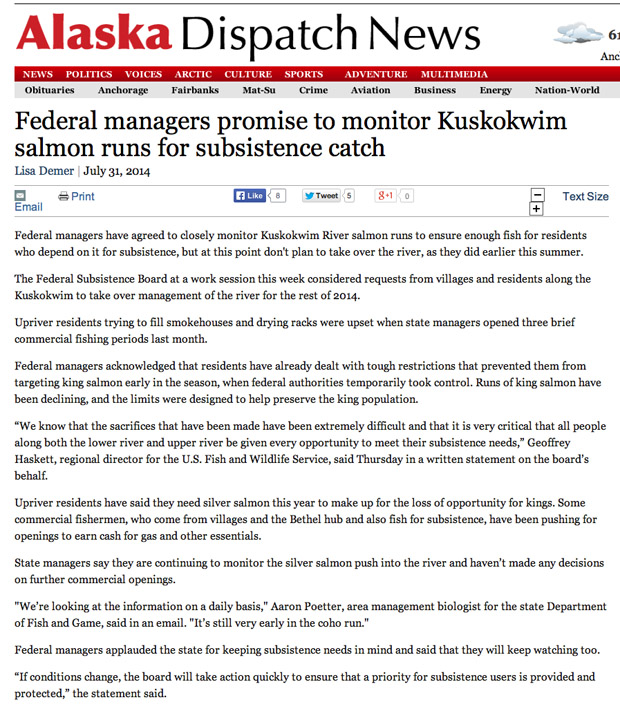 The following letter was recently sent to ADF&G fisheries managers by Mark Leary expressing his frustrations over his dissatisfaction of the way the fisheries have been – and still are – managed this season.  This sentiment is shared by other subsistence users – including some other Working Group members and especially middle and upriver fishers who tend to have a more difficult time harvesting adequate salmon compared to lower river fishers.

Been reflecting a lot over the past two months of subsistence fishing on the Kuskokwim and the growing frustration/dissatisfaction with State management of the fishery – especially with regard to the Middle and Upper River.

We requested that fish wheels be allowed 24/7 early in the season as was allowed in Federally managed waters. THIS WAS IGNORED

We requested that an Elder Fishery for a small amount of King Salmon be allowed in State waters similar to the Social/Cultural Permit allowed in Federal waters. THIS WAS IGNORED

We requested that escapement data for missing years at two of the weirs be included in the charts that are provided in our meeting packets. THIS WAS IGNORED

We requested that there be no commercial fishing on the end of the Chum and beginning of the Silver runs. THIS WAS IGNORED – NOT ONCE, BUT 3 TIMES
If my memory is working right I believe these requests were all, if not most, supported through formal votes of the KRSMWG. Not only was there no follow through on our requests but there was little or no communication back from ADF&G directly to the KRSMWG explaining why these requests could not be implemented. I find this very troubling. Our group is made up of reasonable People with a great ability for understanding and compromise. But the lack of communication from the Department regarding our requests becomes naturally viewed as disrespect.

We’re not worth the time of day and ADF&G is going to do whatever it wants.

But the truth is – we aren’t primitive children who don’t know what’s good for us. We are local People with a long term perspective of subsistence, commercial, and even sport fishing on Our River and a deeply vested interest in maintaining the sustainability of Kuskokwim Salmon stocks for our descendants.

The disrespect whether it be real or perceived, to the KRSMWG is unacceptable and if we are going to go forward as an effective local advisory group, it must be resolved.

Or the current management system must be replaced. 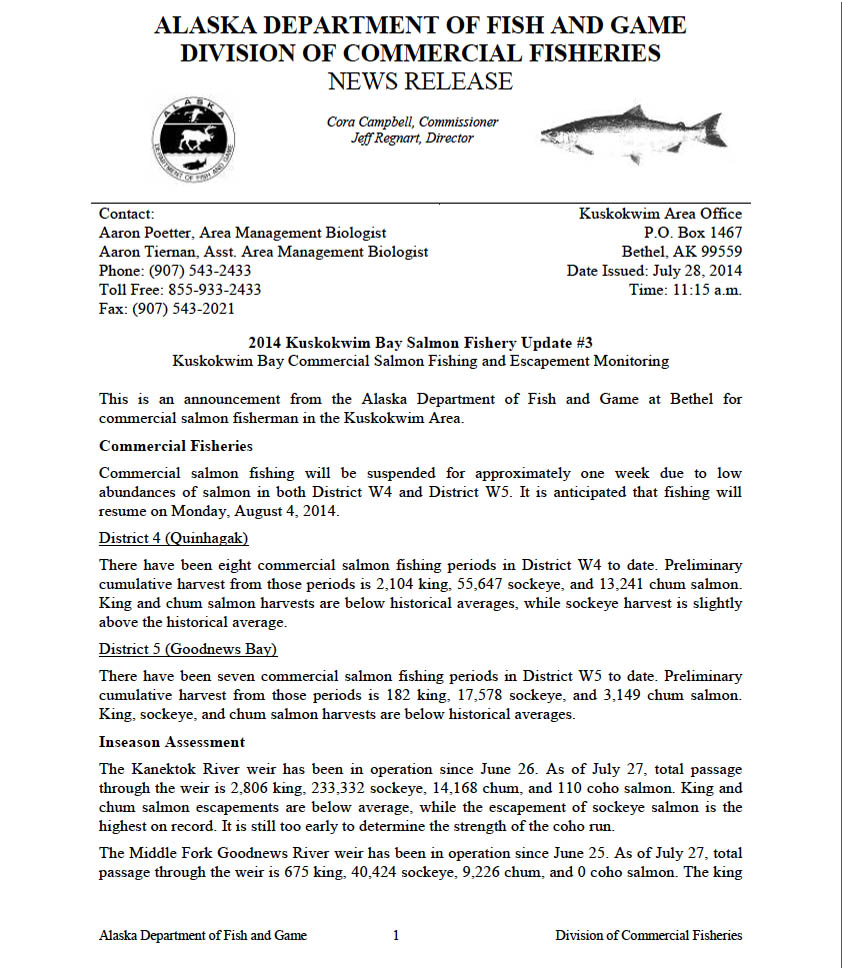 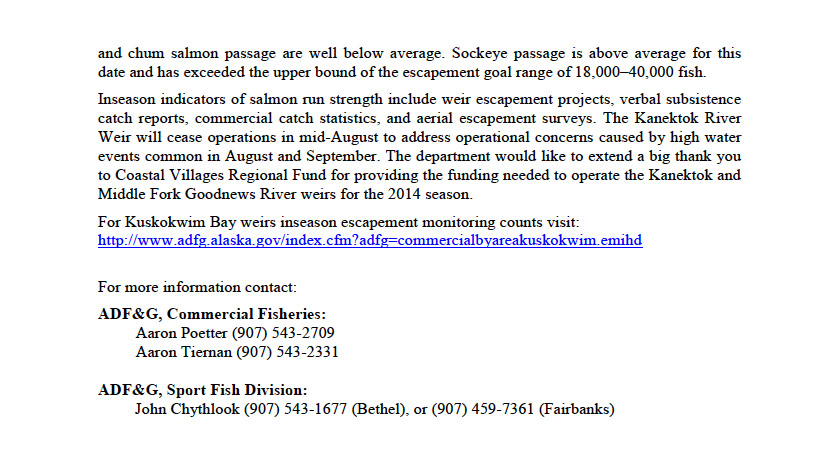 Wow – this is very disconcerting…to say the least.  That’s all we need given the low Chinook numbers and what appears to be a decline in overall Kuskokwim productivity. 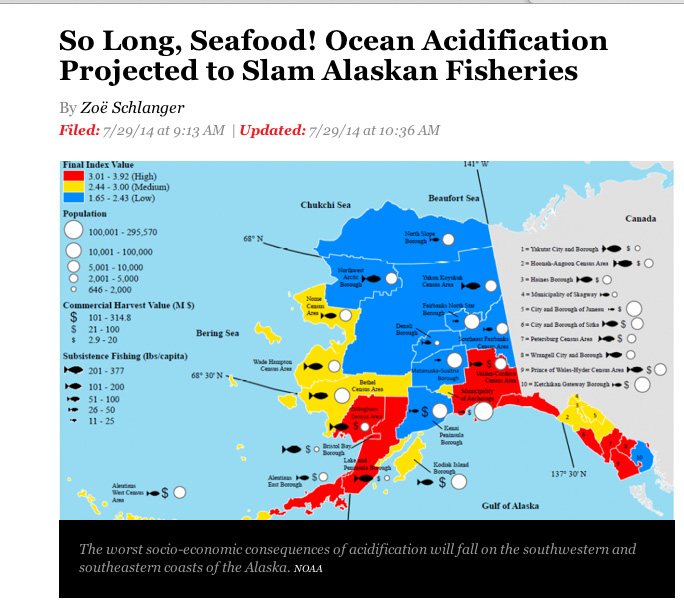 See the entire article at http://www.adn.com/article/20140723/kuskokwim-fish-wars-heat-again-silvers-enter-river 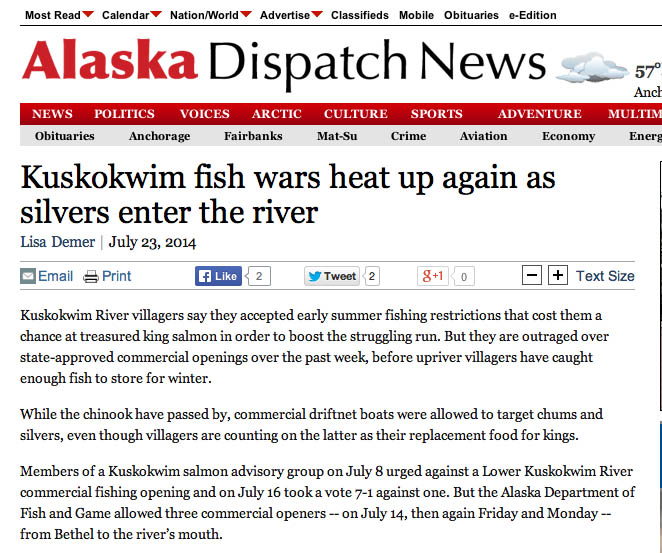 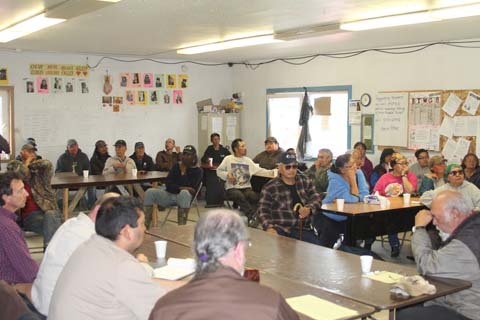 More than 50 people attended the meeting in Lower Kalskag to express their frustration over their inability to harvest enough salmon to meet their subsistence needs. 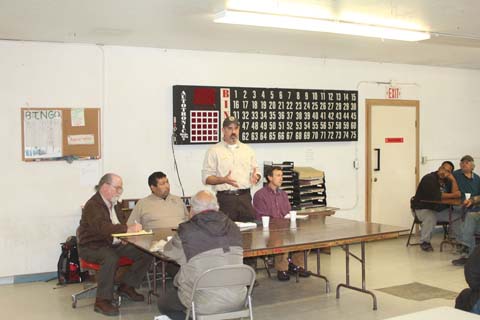 It appears that there were a few cages rattled since the recent meeting in Lower Kalskag last Friday where local residents expressed their frustrations over an inability to meet their subsistence needs.  The results are shown below. 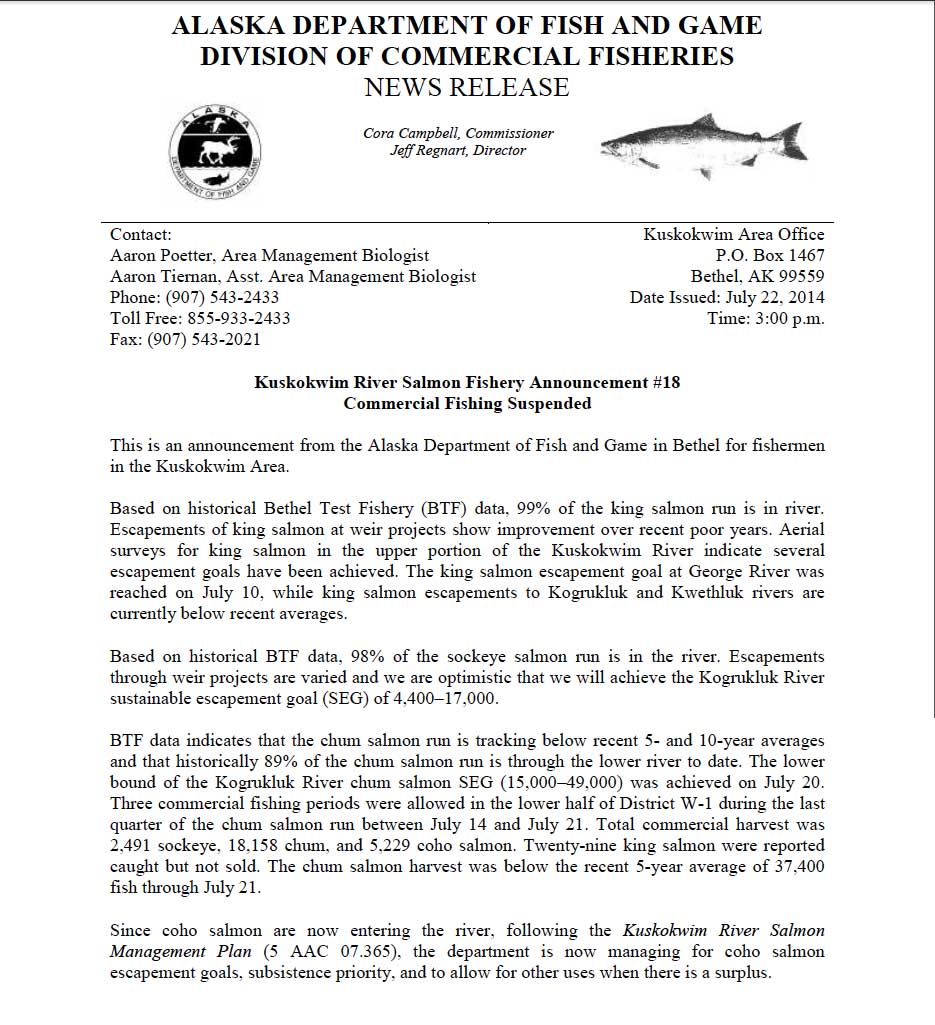 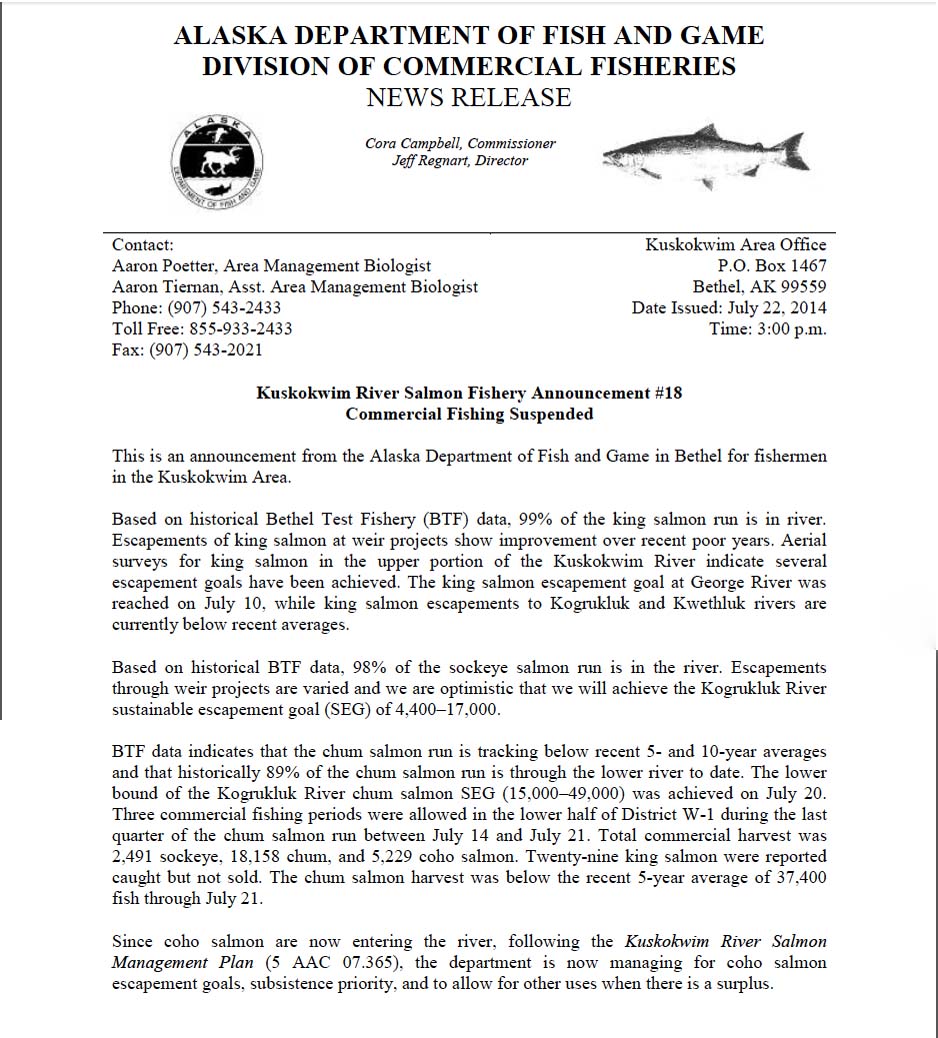 There was a meeting held in Lower Kalskag on Friday the 18th in which over 50 people attended in person and at least a dozen participated via telephone; the meeting was convened over the concerns for the difficulty that many of the middle and upper river subsistence users have had in meeting subsistence needs. Also in attendance at the meeting was the Fish & Wildlife Service.

Coupled with the concerns expressed for many people not meeting their subsistence needs were the two commercial openings that the Department called last week, the 2nd occurring while the meeting was in progress. It was noted that the Kuskokwim Salmon Management Working Group did not support either commercial opening (however there was no quorum for the meeting prior to the first opening).

Lower Kalskag’s Traditional Council called the meeting to find out more about what options they had for trying to make it easier for middle river residents to meet their needs and have assurances that adequate coho salmon will be available to fill the void left from Chinook salmon conservation measures. Specifically, they were considering submitting a Special Action Request to the Fish & Wildlife Service much like the one that Napaskiak submitted this spring calling for federal management of the fishery.

Why the meeting in Lower Kalskag? While some residents of the lower river still have not met their needs, the majority of both Upper and Lower Kalskag haven’t. Caught between the dual management regulations, their geographic locations did not allow them to drift with 4” nets like their upriver neighbors in Aniak, Chuathbaluk and Napaimute were able to. In addition, there are only a limited amount of set net sites around Kalskag.

As of July 19, the chum CPUE in the Bethel Test Fishery was the 4th lowest in 11 years. Although the lone chum escapement goal established at the Kogrukluk weir was met on the 20th, this year’s count as of the 14,892 on the 19th is only slightly higher than the lowest seen in the last nine years; this should indicate to managers that the subsistence fishing for chums wasn’t fast and furious…by any means – even during a normal year with no restrictions.

The expectation by managers going into the season was to provide the people with sufficient opportunities to put up chums and reds to make up for the lack of Chinook – but the reality is that such opportunity in regards to allowable fishing time was limited compared to normal years (6” nets weren’t allowed in Kalskag until June 30th).

Similarly, the BTF CPUE for the sockeye was the 4th lowest during that same 11-year period. The 1,307 fish that have passed the Kogrukluk River weir as of 7/19 is the lowest (by far) in the past nine years (the next lowest was 2,758 and the highest was over 32,000). The low end of the escapement goal of 4,400 will likely be met; however, managing for escapement alone does nothing to help allay food security issues. Like the mediocre chum numbers, the BTF numbers and Kogrukluk weir results for sockeye should also validate what many of the fishermen in the middle and upper river fishermen have been saying for some time…and what they expressed at Friday’s meeting.

So the question will be, as it always is with the State’s supposed management priorities (i.e., escapement, subsistence, and commercial in that order), “Did the people have a reasonable opportunity to harvest fish this year?”

Residents of both Upper and Lower Kalskag feel very strongly that they didn’t and are very frustrated over their concerns not being addressed.

One of the reasons the Department gave for announcing the first opening was that they were receiving mixed messages about the success of fishermen in the middle river. There have been reports by subsistence representatives – like me – earlier on that stated that some folks had met their needs while others were still trying to get what they needed. However, after the first commercial opening more middle river residents came forward during the July 16 Working Group meeting and expressed concern over their inability to catch chums and or sockeye.

I’ve learned first hand how easy it is for anyone (i.e., ADF&G, FWS and even lower river fishers) to participate in a Working Group meeting in Bethel or Anchorage and hear mixed messages coming from subsistence reports and not have a full understanding of what the conditions really are. Or even a chorus of residents claiming not to be doing well, and being somewhat apathetic to their needs. Well, now that I have lived here in Aniak for twelve years, I’ve been part of the struggles that past few years. I have absolutely no salmon in the freezer and will be totally reliant on the coho.

What seems to be missing, at least from an upriver perspective, from the State’s management of the Kuskokwim fisheries? 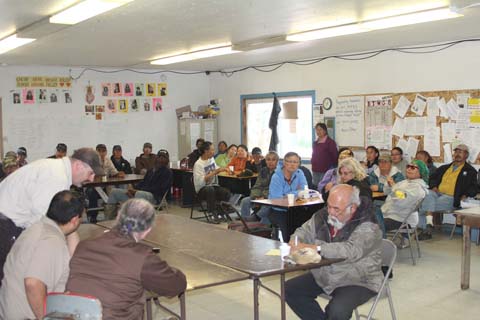 The Fish & Wildlife Service listens to public testimony from over 50 local residents about concerns for meeting subsistence needs pertaining to salmon. 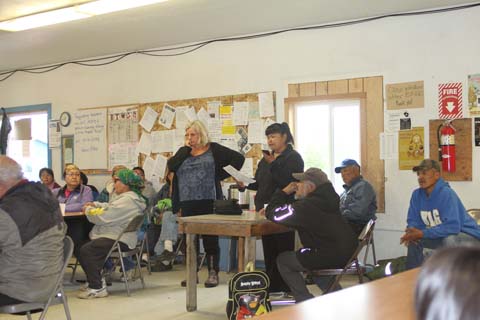 Nastasia Levi takes a call from a concerned citizen in one of the middle or upriver villages. 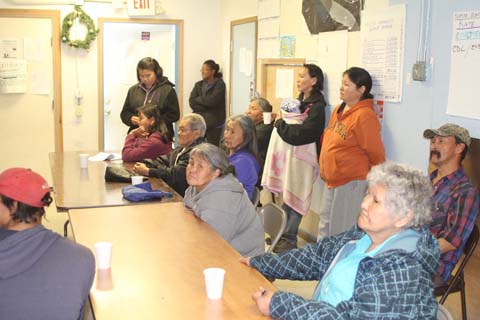 Residents listening to the testimony of their family and neighbors over the hardships brought on by the low return of kings and the mediocre chum salmon run.

I personally tried several times last year to get the previous manager to spend a day or two here in Aniak travelling up and down the river to witness for himself the frustration the people were experiencing. To recap last year, a high proportion of downriver families met their Chinook salmon needs but middle and upper river residents struggled immensely; then the drainagewide escapement was the lowest on record. Once again the people of the upper river expressed concern for what was happening but their voices simply were not heard.

I’m sure that the visit last Friday by the Fish & Wildlife Service to Lower Kalskag allowed them a first-hand look at the real situation, and the folks in attendance appreciated that greatly. I’ve been paying close attention to the recent meetings where tribal entities are trying to establish an intertribal fish commission, and the one thing that I heard loud and clear during those meetings, and saw in the Kalskag meeting, is that the people want to be sincerely heard and have their needs understood.

Here’s an excerpt from the Department’s most recent News Release announcing the third opening, which was yesterday the 21st: The outlook is for below average to average coho salmon run and a commercial harvest ranging from 80,000–140,000 fish. The coho salmon run will be managed with the expectation that the subsistence harvest will be larger than average because of conservation actions taken in June for king salmon.

It appears to me that most middle and upper river subsistence users might not buy into that last line. 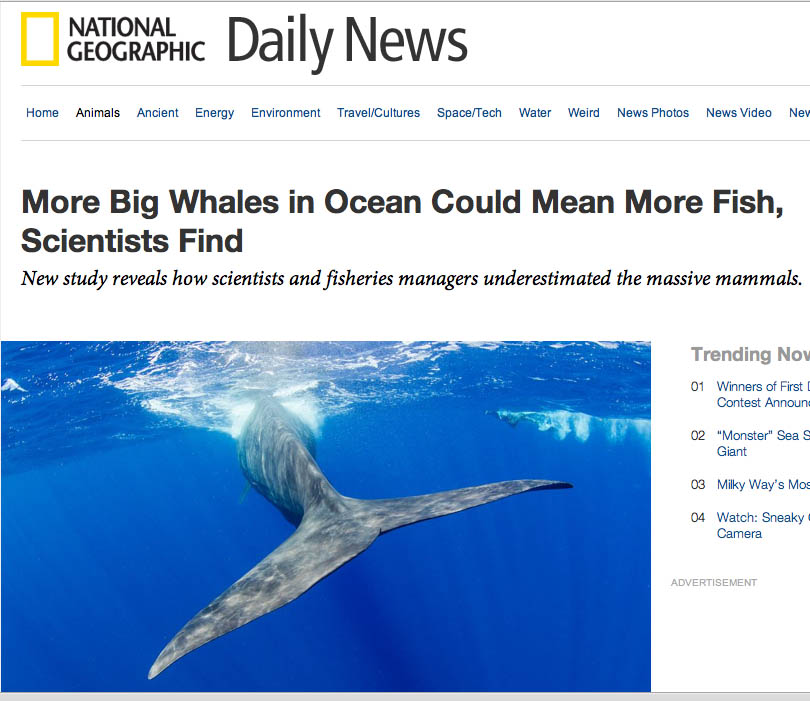 Based on the following justification, the Alaska Department of Fish & Game has announced a commercial fishing period for section 1B for Monday the 14th of June. 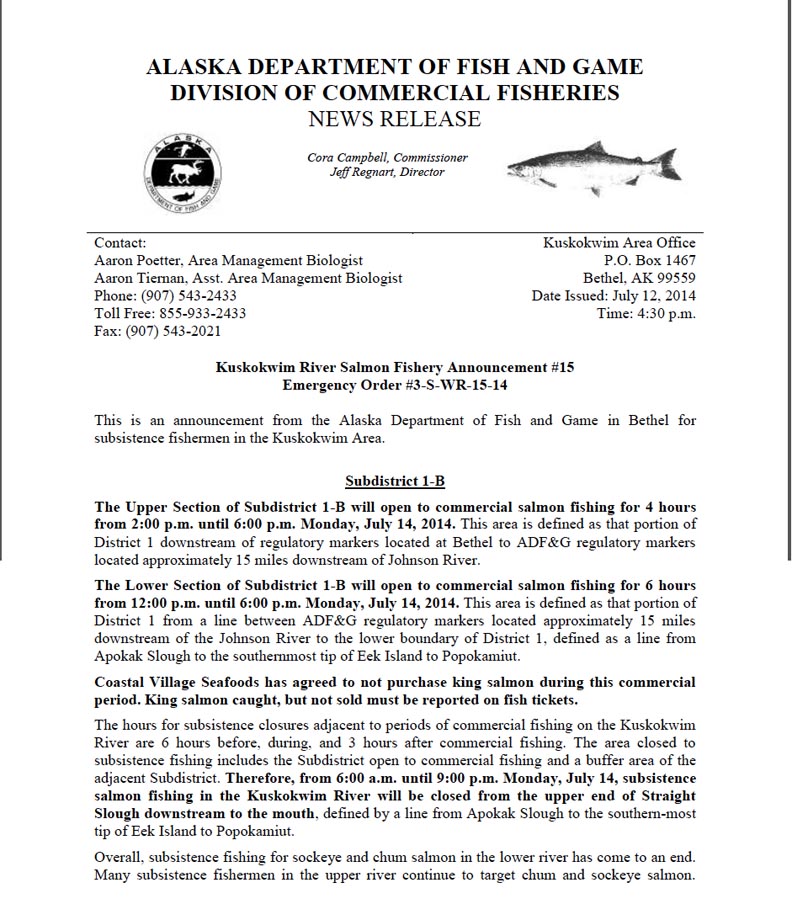