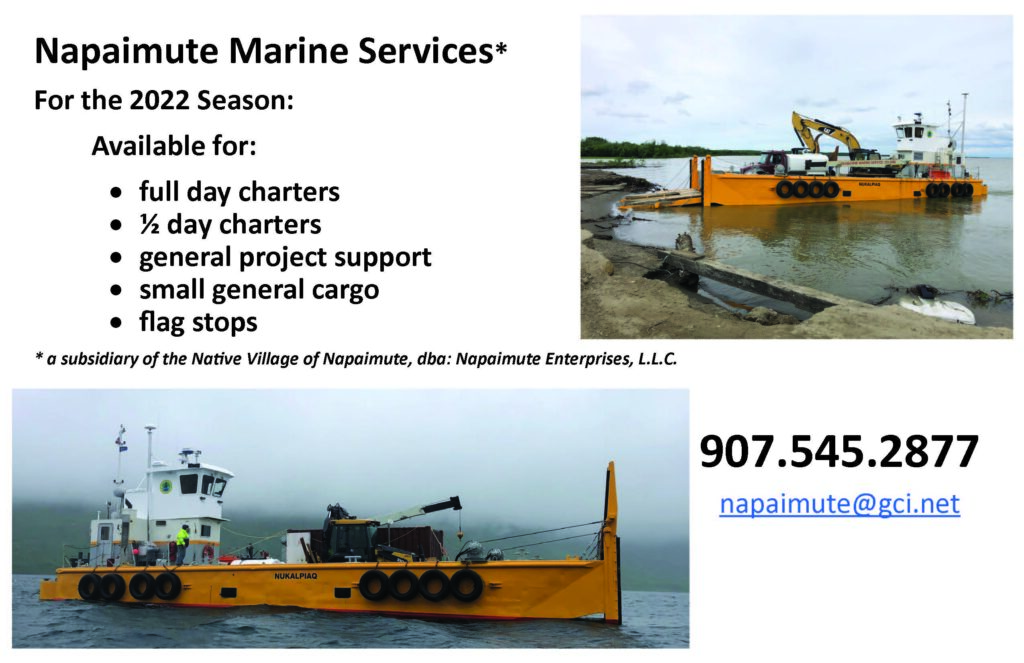 The Native Village of Napaimute is seeking proposals for the purchase one New Steel or Aluminum Shallow Draft Flat Deck Landing Barge, F.O.B Port of Bethel, or Entrance Buoy to the Kuskokwim River, Alaska – RFP#2022-01. Proposals must be received by the Napaimute Bethel Office at PO Box 1301 Bethel, AK 99559-1301 no later than 5:00 p.m., local time, March 23, 2022. Any proposal received later than the specified time and date will NOT be accepted or considered. No facsimile or telephone proposals will be accepted. Submitted proposals shall contain all information requested and be submitted in the format shown within the solicitation document. Mailed proposals MUST be sealed and clearly identify the name and number of the RFP on the outside of the envelope/package, as well as the Proposer’s name, address, and business affiliation (if applicable). Electronic submissions are acceptable. Proposals may be submitted by email or U.S. mail

The Affordable Connectivity Program is a federal program that helps low-income households pay for broadband service and internet connected devises. You may be eligible to receive this benefit if your household income is less than 200% of the federal poverty guidelines, if you receive federal assistance, or if you received a lifeline benefit.

(The ACP program replaces and is a continuation of the previous EBB program. The EBB is set to expire March 1,2022 for those currently on the EBB program)

To apply select this link https://acpbenefit.org/
To find out more about this opportunity you may go to the following links:

You must apply BEFORE March 1, 2022, to avoid uninterrupted service (for previous EBB enrollees)

Assistance Amount: One-time payment of up to $1,500 supported by completed self-certified Application for COVID-19 emergency Assistance

Download the Napaimute ARPA Application for COVID-19 Tribal Member Assistance from the link below:

U.S. Treasury guidance specifically requires that all Tribal entities that implement Cash transfers ensure that cash transfers respond to the negative impact of the pandemic and are reasonably proportional to the negative economic impact they are intended to address. Cash transfers grossly in excess of the amount needed to address the negative economic impact identified by the recipient would not be considered to be a response to the COVID-19 public health emergency or its negative impacts and would be outside the scope of eligible uses under section *602(c)(1)(A) and 603(c)(1)(A) of the Social Security Act and could be subject to repayment.

Due to a lack of response, there will be no elections held at the 2021 NVN Annual Meeting on November 13, 2021. Seat B will become vacant.

Tribal Members 18 years of age and older that are interested in appointment to this seat must submit their Letters of Interest no later than 5 PM Alaska Standard Time, December 3, 2021.

Letters of Interest can be mailed to: