For the first time ever in the Kuskokwim restrictions will be implemented before any large pulse of Chinook salmon have entered the river.  Beginning 12:01 AM Sunday morning on June 10 there will be a 7-day subsistence closure for Chinook salmon for the most downstream section of river (i.e., from the regulatory marker below the Johnson River on downstream – see attached map).  This closure is part of a recently implemented rolling closure schedule, and fishing in that lower section is scheduled to re-open on June 17 at 12:01 AM.  Nets of 4-inch mesh and less and shorter than 60 feet long will still be allowed during the closed period; this is to allow fishermen to catch whitefish and other important subsistence fishes.

Fishers in Section 2 (i.e., just below the Johnson River up to Tuluksak) will have to cease fishing at 12:01 AM on Wednesday, June 13, which does overlap the Section 1 closure.

The rolling closures will progress upstream into the remaining three sections of river unless the run turns out to be much stronger than anticipated.  As is the case with any management decision, they can be rescinded depending on the circumstances.  For updates and scheduling check with the Alaska Department of Fish and Game (543-2433), look for news releases or listen to the radio and other news sources as to when upstream closures or changes will occur. 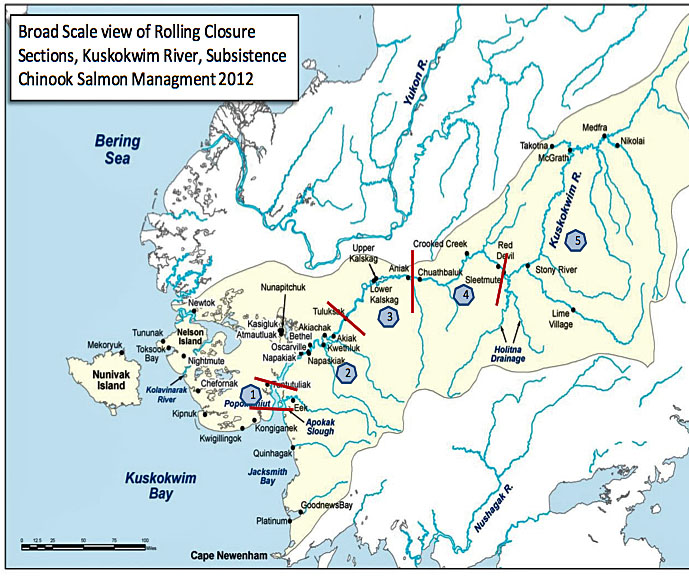 The rolling closure schedule was the recommendation of the Department of Fish and Game and the Fish and Wildlife Service and supported by the Kuskokwim Salmon Management Working Group.  Co-Chair Bev Hoffman noted that it was a heavy decision for every Working Group member.

Fritz Charles said that everyone up and down the Kuskokwim had a sore heart knowing the implications for such a drastic decision, but he knew that the tough decision was for everybody’s benefit in the long run.  Fritz quoted the late Iana Gusty who often said, “We have to work together no matter who we are”.  He noted how Iana, at every meeting, would say this, especially when the hardships affected everyone.  Fritz, with apprehension in his voice, stated that as much as he didn’t want to vote yes on the recommendation that we all have to live with it and “I want my grandchild’s grandchildren to fish for Chinook 40 years from now.”

When the vote was tallied it was a unanimous decision to support the Department’s recommendation to implement the rolling closures.  Ray Collins from McGrath and Western Interior RAC member representative said that he was proud of the Working Group to make such a tough decision and that since it was unanimous that that made him feel that it was a demonstration of how the people of the Kuskokwim work together and “look to the future and do what we can”.

Why seven days and not three or four?  If you recall, beginning in 2001 and running for several years, subsistence fishing was allowed only 4 days a week – being closed for three consecutive days.  However, looking back those “windows” actually proved inadequate to protect the fish.  The intent of the “windows” was to 1) reduce the proportion of Chinook salmon harvest in the early season and improve the number of upriver fish returning to spawn 2) protect those fish coming in first which tend to travel the furthest upriver to tributaries around McGrath and beyond (these are not the tributaries that produce high numbers of Chinook like the Holitna, Aniak or Kwethluk rivers), and 3) extend the number of days in which the number of fish were harvested; in other words spread out the catch.

Catch calendar data, however, showed that the “windows” were ineffective at accomplishing any of those objectives.  In essence, those 3-day periods basically only changed people’s behavior to where everyone fished extra hard right up until the closure and immediately once it re-opened.  Based on radio tracking studies conducted several years ago it was determined that the average Chinook travels about 13 or 14 miles per day, so it could take a week or more for a fish through a section; hence the reasoning for the full 7-day closure as well as several days of overlap from one section to the next.  The intent of the rolling closures is to give a substantial block of fish the best chance to get to the spawning grounds with as little fishing pressure as possible.

What was so compelling that forced the Working Group members to make such a hard decision?  The basis for the closure is the apparent weak run that has been noted in subsistence reports by area fishermen and the Bethel Test Fishery results.  Downriver subsistence fishermen like James Charles conveyed that his family and other Tuntatuliak residents were catching very few fish; Henry Lupie confirmed the poor fishing.  Charlie Brown of Eek said that he only knew of a few jack kings that have been caught.  Iana Gusty Jr. said that ONC surveyed six families who were fishing but only one family reported catching king salmon.  Mike Williams noted that the water was high near Akiak and that set nets were picking up two or three kings.

Because the Bethel Test Fishery (BTF) is such an important tool in the decision making process, it’s imperative that people understand just how it works and how the numbers are used.  The BTF keeps a running total of the cumulative catch throughout the season; these numbers are often referred to the catch per unit effort or CPUE.  Every time a fish is caught it is added to the previous running total of fish caught.  For example, lets say we’re members of the test fish crew and we went out the very first day (example – June 1) and didn’t catch any, then the cumulative at the end of day one is zero.  Then if we went out the next day and caught two – the cumulative at the end of that day is two.  If the next day we catch five – then our cumulative is seven (0+2+5)…and so on through the season.

Lets look at this year’s numbers so far:

Now look at what the cumulative number was in 2003 on the 6th of June – 106 Chinook had been caught.  Granted the run may be late this year, and we’ll keep our fingers crossed that that is the case.  Unfortunately, the Department pointed out that in previous years when the run was late it generally wasn’t very strong.

People often ask why the Fish and Game crew fishes the same spot each time and why not go where the fish are?  They also ask why not hunt for the fish and try to catch as many as possible like a subsistence or commercial fisherman would?  In order to be used as a scientific tool, it must be repeatable – meaning that the information can be compared to the previous day, the previous week and even previous years.

Unfortunately, it isn’t quite that easy because nature, as we all know, is highly variable.  The biologists know that in some years fish are less susceptible to being caught because the water is much clearer and they shy away from the net.  Or maybe there is a lot of rain in one particular year and high water makes the fish harder to catch because the fish are scattered across a much larger area.  So they do their best to assess the run strength by considering those, and other, variables.  But the key point to remember is that this tool must be as consistent as possible; that’s why they fish the same place and same period of day in regards to the tide from year to year.

As dire as things seem, and this is no consolation for the hardships that people will face this summer, but one must look back to possibly predict the future.  Below is a graph showing the total in-river escapement, or what returned to spawn, over the past 36 years.  Most of you will likely recall the low runs of the mid eighties and late nineties and even 2000.  But look at the following four or five years where the escapements rebounded quite nicely.  There certainly seems to be some sort of a cycle happening…doesn’t there?  There are so many things that may (example – ocean conditions) – or may not – explain the fluctuations; but we’ll leave them for a later discussion. 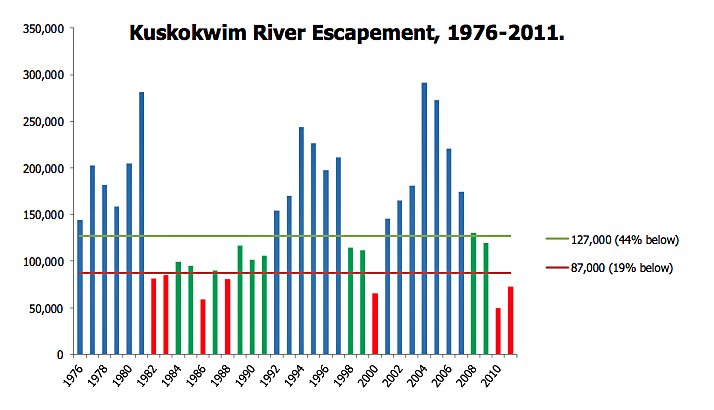