Tour Of The Fort Knox Mine

On Tuesday, September 18, I went on a Donlin Gold sponsored tour of the Fort Knox gold mine near Fairbanks with about 30 other folks from throughout the region.  The intent of the trip was to show what a large-scale traditional truck and shovel open pit hardrock mine would be like since the Donlin Gold project would be similar…but even larger.

The chartered Penair Saab 340 departed Bethel early in the morning and headed straight to Fairbanks.  Upon arriving in Fairbanks we boarded a bus and travelled the 25 miles to the mine site.

My first impression as we approached the site was that this was a huge endeavor, much larger than I expected.  To show just how big it is – the monthly electric bill is 4.3 million dollars. 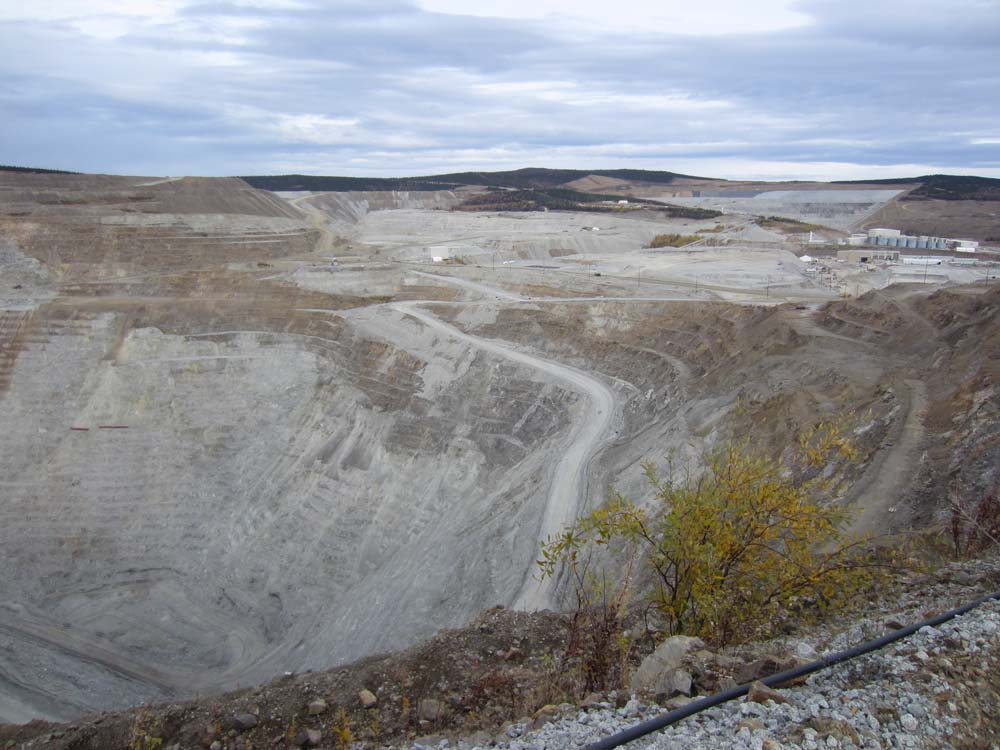 Looking across a portion of the mine from the top of the pit.

As the bus approached the premises, several Kinross personnel boarded and provided information on the various aspects of the operation.  The first stop was to the top of the pit that is approximately 1,400 feet deep.  From that vantage point the 20-foot high dump trucks looked like ants crawling around as they went to and fro the mill facility.  An interesting factoid on those massive dump trucks – each tire is valued at an astounding $80,000. 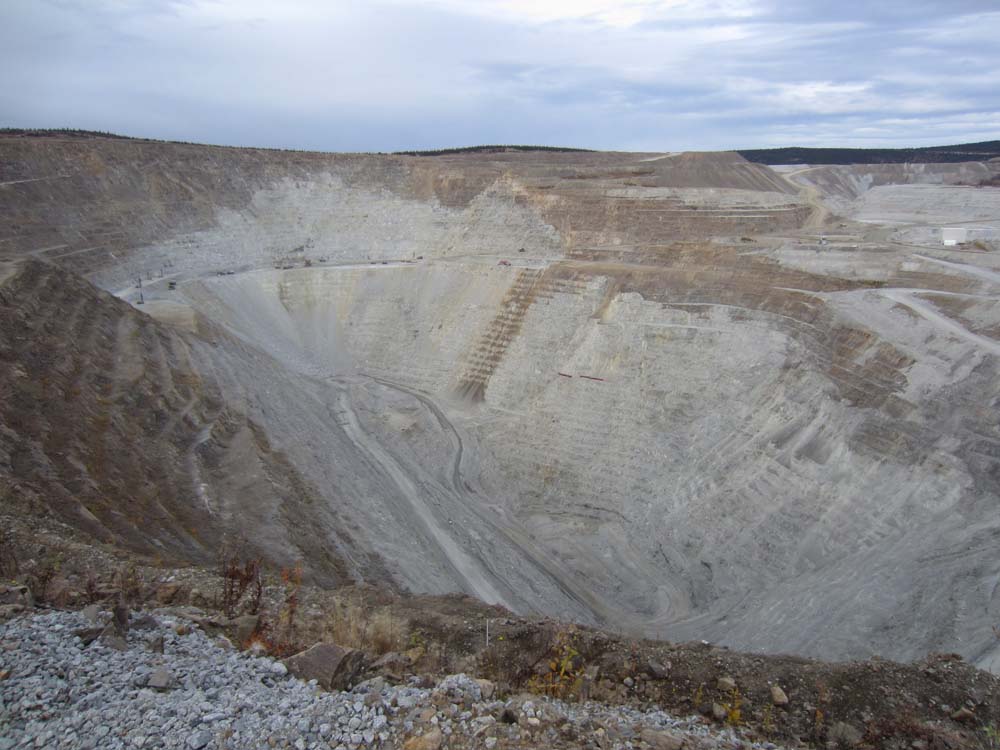 Looking down into the 1,400 pit that will some day be a lake. Note the dump trucks on the far side of the pit 1/3 of the way down from the top of the photo.

As part of the tour we were able to enter the mill facilities where the ore is crushed and processed; considering the immensity of the operation, the technology and equipment used along with the sincere concern for safety, it was all very impressive.  The big hit was when the Kinross tour guide brought a gold bar worth a quarter of a million dollars onto the bus.  Eyes lit up and everyone wanted to hold it. 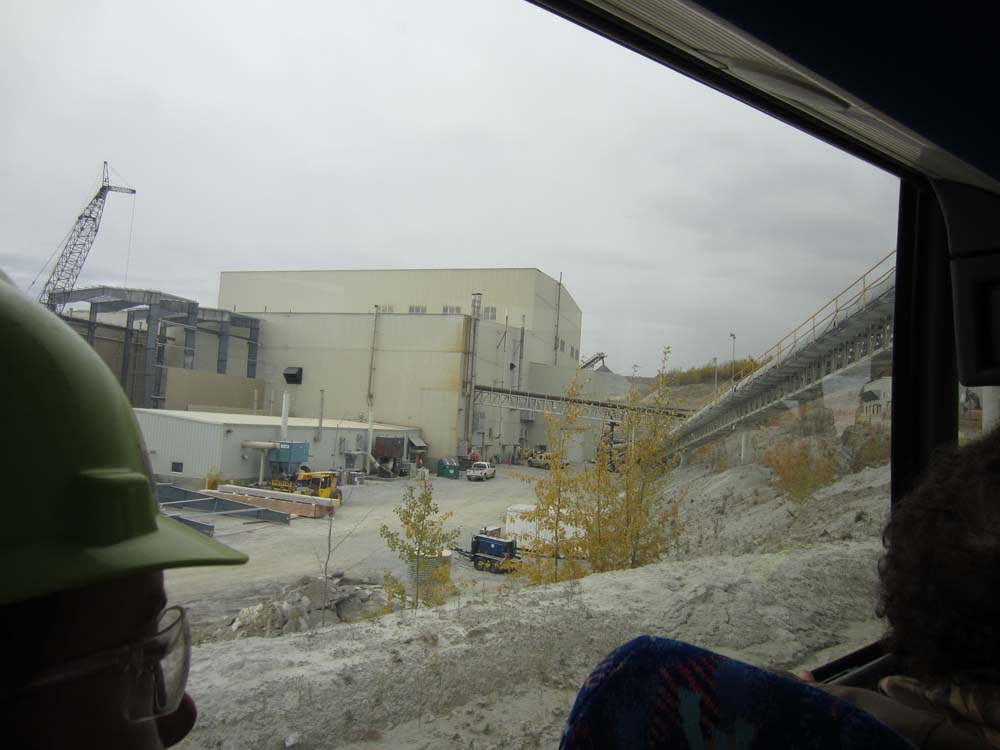 View of the outside of the processing mill building. 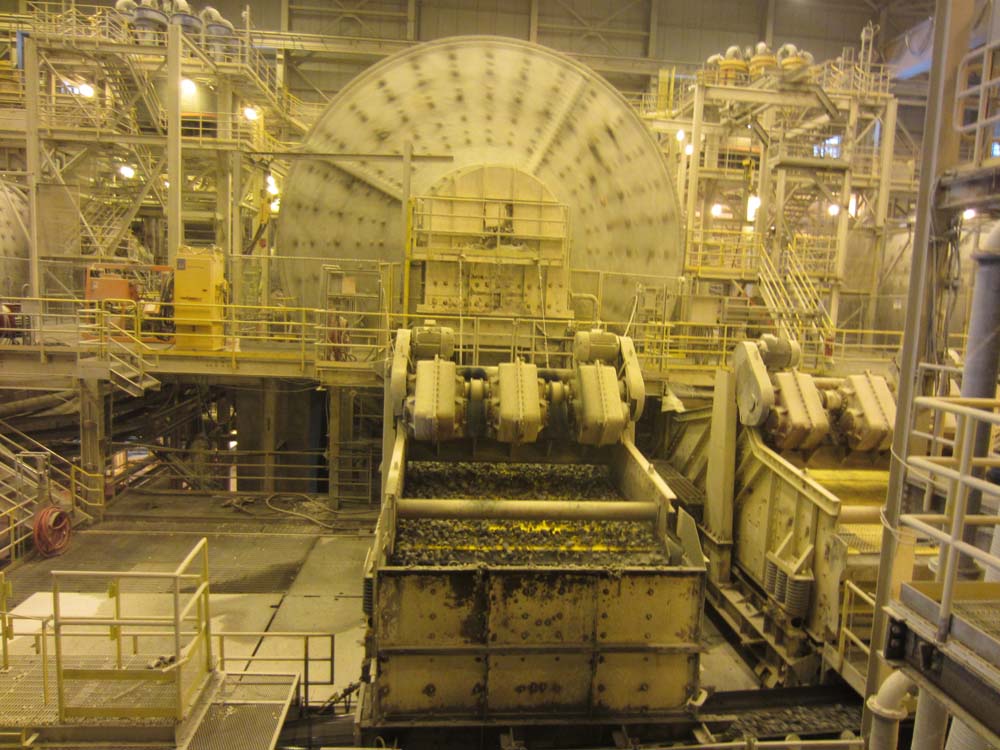 Inside the mill showing one of several rock crushing drums.

The Fort Knox mine, like the proposed Donlin Gold mine, is what’s considered a zero discharge mine – that is during the mines’ operations.  That means that all the external sources of water (i.e., surface and ground) are prevented from entering the mine by means of diversions or dewatering and that water arising on site (e.g., rainfall, etc.) and used in the mining process is recycled and/or evaporated off – not to enter the streams below.

One difference between the Fort Knox mine and the proposed Donlin project is that Fort Knox uses two cyanide leaching techniques to extract the gold from the ore – an outdoor heap-leach facility for the lower grade ore and a contained vat leach system that extracts gold and silver from the finely crushed higher-grade ore; the Donlin project would use the latter system.

But there are several significant differences between the Fairbanks mine and the proposed Donlin – namely that mercury and acid rock drainage are non-issues at Fort Knox.

The mercury levels at the Donlin site are roughly 1-3 parts per million, much of which supposedly will be removed in liquid form from an autoclave during a processing stage or else a solid form – mercury sulfide.  However, some will eventually make its way into the tailings, which if under the right conditions could be hazardous.  Besides mercury, other considerations dealing with the tailings water is the presence of antimony, selenium, arsenic and molybdenum.

It’s been determined through geochemical analysis that approximately 7.5 % of the waste rock will have the potential to generate acid mine drainage.  Considering how much ore will be processed and stockpiled, this could prove to be a significant challenge when it comes to maintaining water quality. 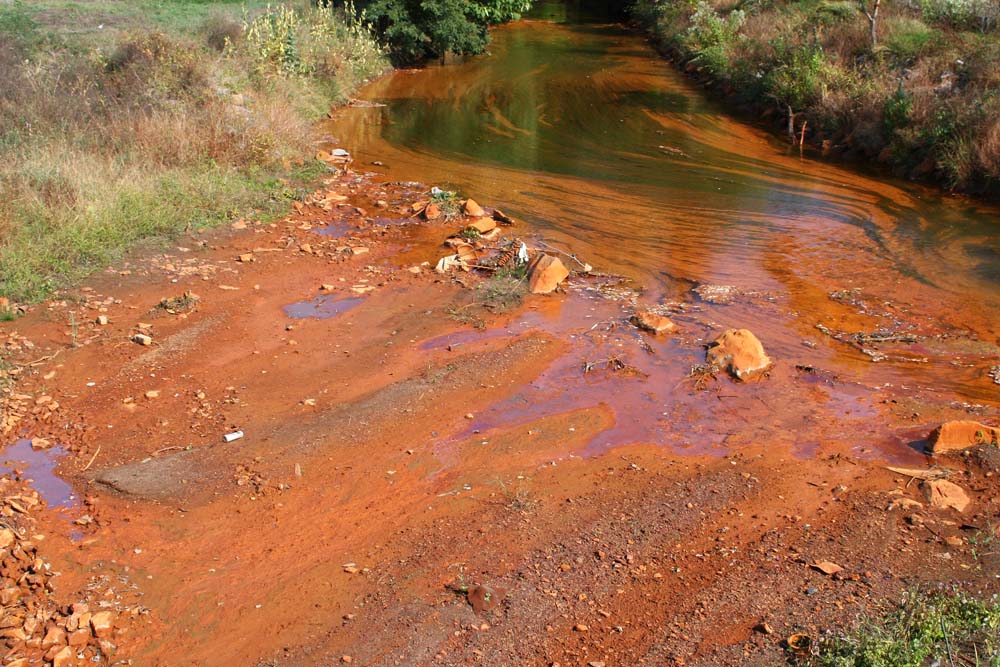 What a stream affected by acid mine drainage could look like; this one is in Pennsylvania. Such a stream is devoid of most life forms, including fish.

For that reason I was disappointed that we didn’t get to see the tailings dam up close because, to me, this is one of the more critical aspects in regards to protecting our salmon and other fish resources.  Considering the magnitude of the Donlin project, there’s going to be a huge dam required to store the millions of tons of waste rock. 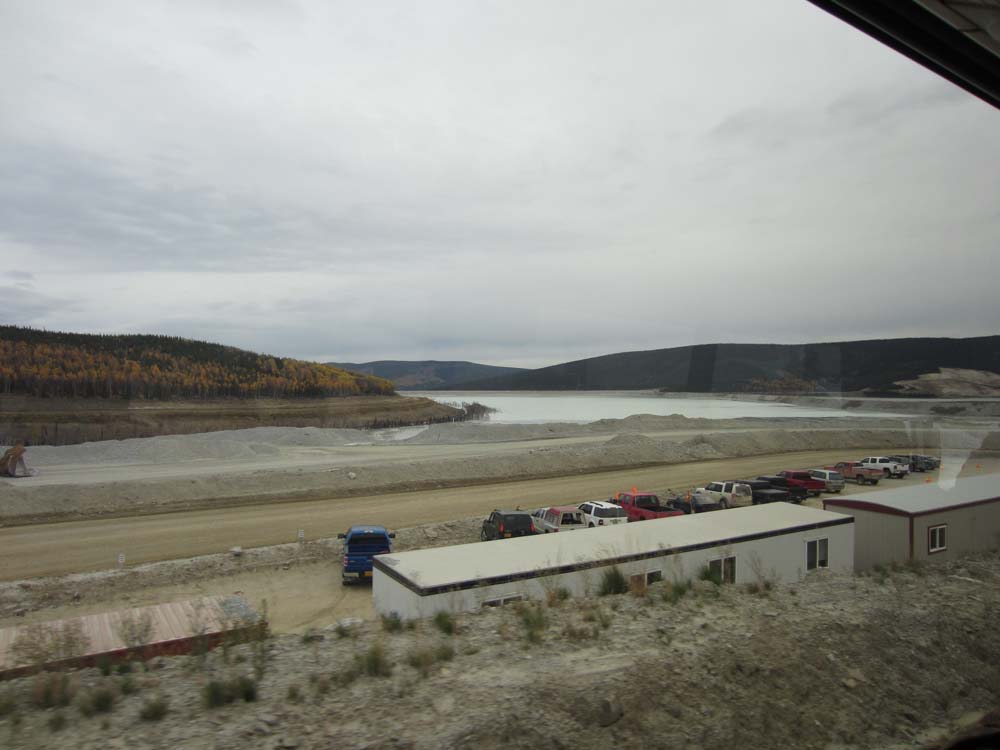 Looking through the bus window at the tailings lake and dam.

Because of the presence of acid generating materials coupled with selenium, antimony, molybdenum and other potentially toxic elements, another substantial concern comes from years down the road when the pit fills with water forming a huge pit lake.  The overflow from this lake will have to be treated and monitored for perpetuity…meaning forever.  To date, no mine in Alaska has ever been permitted with that type of obligation.  Forever is a long time…it definitely goes way beyond seven generations.

The permitting process will take at least 3-4 years.

The life of the mine approximately 27 years.

The mine will provide between 600 and 1,400 jobs, depending on what stage the mine is at.  The construction phase will take 3-4 years and will provide roughly 3,000 jobs.

The amount of power needed for the mine will be at least 4 times more than what runs Fort Knox.

The proposed natural gas pipeline is expected to take two years to construct and will go under the Kuskokwim River using a drilling technique called directional drilling.

With the natural gas pipeline, much less fuel will need to be hauled by barge up the river (approximately 80 million gallons).

On average there will be 4 barges on the river at any given time – two going up and two coming down.