A Fishing Season To Remember…Or Forget by Mark Leary 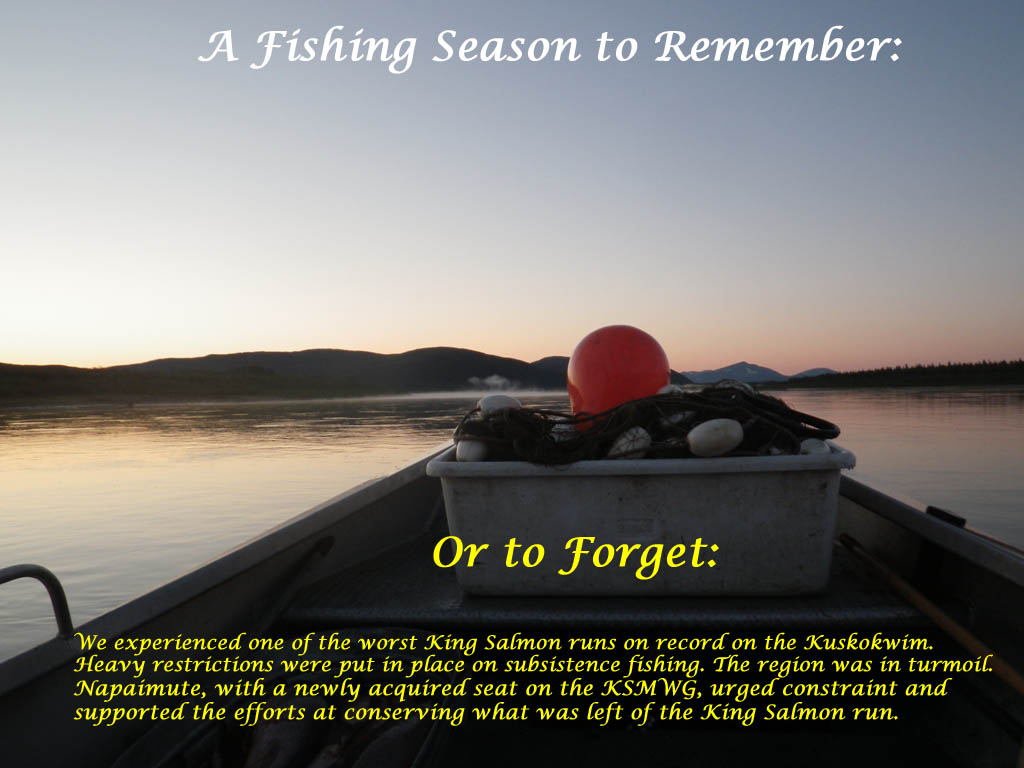 The Politics of Fish: Doing What’s Right – Not What’s Popular

It’s been a summer to remember – or maybe to forget. Days and days of bad weather, high water in the River, and a disastrous King Salmon Season.

We are still dealing with the effects (the politics) of this disastrous King Salmon season, but as winter comes closer the People will have persevered and filled their freezers with the many other kinds of food still abundant in our waters and on our lands: Chums, Reds, Silvers, whitefish, waterfowl, berries, moose, bear, beaver, etc. I know my family’s own freezers are full. Nobody’s going to starve as some lamented back in June. This is 2012 – not 1912.

In my own small life, I’ve had the privilege of spending a great deal of time with Elders from the Lower, Middle, and Upper Kuskokwim, as well as the Middle Yukon. I don’t know what they saw in me – maybe it was the immense respect a young guy had for the way they used to live – and the countless hours he spent just listening. From them I learned about a way of life that was hard, but independent. “They didn’t depend on nobody”. They got almost everything they needed from the land and waters around them – some stuff they got from the traders, but the time when their parents and grandparents got everything off the land was still in their memories. Also in their memories were times when there were fish and game shortages; sometimes due to bad weather patterns, sometimes simply due to the natural fluctuations of wildlife. They always adapted, found other things to eat, did what they had to do to survive.  They had to. There was nobody else to help them except themselves. No “Disaster Declarations”. No QUEST CARDS. Yet, there were times when some didn’t make it – stories of starvation – but those stories are from a very distant time.

Does anyone remember how they used to catch salmon in the main river in traditional times?

…Before the introduction of the deadly 50 fathom, 8″ mesh nets we use now.

The way I’ve been told that Middle and Upper River People fished was with large taluyaqs and elaborate fences reaching out from the shore – all made from split spruce wood, tied with spruce roots. The People also used short handmade nets either set or drifted from their canoes or qayaqs. Although both methods would have been less effective in a high water year like this one, they did the job.

This year in the traditional spirit of adapting to circumstances, one industrious family that I know of cut, smoked and dried over 140 silvers during August. It can be done. It takes changing the normal ways of doing things and a little more work, but isn’t that what the strong People of our region are famous for: persevering and adapting. If it wasn’t true, the People would have starved long ago and there would be nobody left in our region today. Instead we are flourishing.

And it makes me sad that while we’ve made heroes out of the 31 people that fished in protest during the subsistence King Salmon fishing closures, nobody has ever talked about the real heroes of the 2012 King Salmon season: the hundreds, maybe thousands of people that didn’t fish. These were the people that could see beyond the “right now” and truly thought about our children and grandchildren by not fishing. These are the heroes to me – the people that stuck together and endured the hardship of not fishing for King Salmon so that we could conserve what little there was for our future generations.

During the subsistence closures I talked to an Elder in Aniak who said to me, “We needed this. We needed to feel this pain. When I was growing up we were thankful for every fish – not just King Salmon. We’ve become spoiled”

In Napaimute we could have fished all we wanted – there was nobody watching – except my own children.  They were watching what I was going to do while the People in the Lower River were in turmoil over not being able to fish. But I told my kids, “We won’t fish. We’ll follow the closures. We’ll do this for you and your kids.” Thinking about what that Aniak Elder said we put up more Chums and Reds to make up for the shortage of Kings and were thankful for them all. It was a hard, sad season for us – as it was for everyone along the River. My Wife commented over and over again throughout the summer, “Gee, I only cut fish one day all summer.” That was on our best day of fishing. On the other days our daughters took care of the few fish we were able to get.

I do believe it’s true that there are many other factors hurting our King Salmon runs – especially out in the ocean. (Something else to consider is the unlimited mesh gear used in subsistence that selects for the BIG females- because it is shown to have had an impact on the Yukon). I don’t believe that the blame falls all on one factor, but is most likely a combination of things. There’s so much we don’t yet know about the salmon.

But the fact is that once the run returns to the River, no matter what happened out in the high seas, or who’s to blame, that’s all there is … and it has to be managed accordingly to get some of them home to spawn.

It doesn’t seem fair that the People of the River have to bear this brunt of management and, in times of low returns – restrictions, but until we fully understand the who and how of what is happening to the salmon out in the ocean there doesn’t seem to be another way.

Now the Alaska Department of Fish & Game is proposing to LOWER escapement goals for King Salmon on Kuskokwim River tributaries and to establish a drainage wide escapement goal for King Salmon. I don’t have a good understanding yet of why they want to do this, but I suspect it’s a reaction to the immense amount of public pressure put on the Department to allow People to fish during the 2012 subsistence King Salmon season.

The entire Kuskokwim King Salmon Escapement Goal was 127,000. When it became clear that the King run was weak and it would be difficult or impossible to meet this escapement goal, previously agreed upon subsistence restrictions had to be implemented.

With LOWER escapement goals there would be more opportunity for subsistence fishing and less chance of fishing restrictions. Sounds like what we all want right?

But on the other hand – DO WE REALLY WANT FEWER KINGS TO MAKE IT BACK TO THE SPAWING GROUNDS?

Seems like we would always want as many Kings to spawn as possible, otherwise we would be slowly killing the fishery.

How much confidence is there that the proposed escapement goals will sustain King Salmon runs for our future generations? What are the social and biological effects of these proposed escapement goals? In order to make an informed decision that will affect our future generations we need to be informed about how our resources and how our People will be affected. In addition, the Alaska Department of Fish and Game has put in a “place holder” proposal to the Board of Fisheries for a Kuskokwim River Salmon Rebuilding Management Plan.  Language in the proposal brings question to ADF&G’s intentions.  Here’s what they have proposed:

If the king salmon run is projected to be inadequate to meet escapement goals and to provide for a reasonable subsistence opportunity, and if the commissioner determines that there is a harvestable surplus of chum salmon sufficient to provide for escapement needs and a reasonable opportunity for subsistence, the commissioner may, by emergency order, open a directed chum fishery and the department shall manage to the extent practical, the commercial chum salmon fishery to minimize the harvest of king salmon.

This proposal has not yet been discussed with Tribes or the Kuskokwim River Salmon Management Working Group.

At the 48th Annual AVCP Convention this proposed lowering of the Kuskokwim King Salmon Escapement Goals was discussed and addressed through resolution. At this time AVCP is asking for a delay to change to escapement goals to allow adequate time for a review of the data and analysis, for Tribes, who depend on the Kuskokwim Chinook stocks, to be adequately informed and involved in the decision making process, and for a Kuskokwim River Chinook Salmon Management Plan to be developed with stakeholders from along the river.

I’m confident that Napaimute’s leadership will support this position to adequately inform and involve our Tribes in the decision making process, but we all must understand that by keeping the escapement goals for King Salmon high, we will also be accepting the fact that when runs are low there will be the likelihood of restrictions being put on Kuskokwim Subsistence Fishing again.

It’s easy to agree to something now when King Salmon fishing isn’t a priority – like we all did last spring when the plan for implementing restrictions in case the King run was weak was first proposed.

But when the going gets tough – if the Kuskokwim King run is weak again – will we truly ALL stick together?

…and the rest of us have been forgotten.

As was stated at the AVCP Convention by keynote speaker and Tribal leader Billy Frank: “United we stand, divided we fall.”

We either ALL fish or we ALL don’t fish.

A King Salmon Management Plan, if developed with people from all along the river working together, could be designed to incorporate the needs of the people.  It could address concerns like maintaining adequate densities of fish upriver or allowing for some limited opportunity to harvest kings for subsistence along the river even in low abundance years to avoid a situation like 2012.  Now, this winter season, is the time for us to work together on these king salmon conservation issues and to address our concerns before the salmon begin entering the river next year.