I spent three days last week in Kodiak at the annual Committee for Noxious & Invasive Plant Management (CNIPM) workshop with over seventy other interested individuals from various agencies like the Fish & Wildlife Service, ADF&G, the Forest Service, Bureau of Land Management, DOT, Department of Environmental Conservation, UAF, UAA, several Soil & Water Conservation Districts as well as a few other native organizations; the Kuskokwim region was also represented by John Oscar, the Director of the Kuskokwim River Watershed Council.

The name of the group that hosted the meeting – Committee for Noxious & Invasive Plant Management – is now really outdated because workshops currently include presentations about such problematic introduced invasive organisms like moths, fishes (e.g., pike on the Kenai Peninsula) and other critters (e.g., ocean crabs that are steadily moving northward from California and British Columbia).

I participated in a panel that discussed the efforts going on in southwest Alaska to document, and hopefully control or eradicate, the relatively few introduced and invasive organisms that we have…or may eventually have within the Kuskokwim drainage.  I highlighted Napaimute’s efforts at spreading the word to outside interests like fishing outfitters about the potential for bringing such troublesome aquatic invaders as water weed (Elodea nuttallii) and reed canarygrass to our region by way of an informative poster and email correspondences.  You can see previous posts on this website explaining the concerns over invasive organisms (i.e., What’s Bugging Alaska’s Forests? and Kuskokwim-Wide Invasive Species Concerns).

Also on that panel was a representative of the Native Village of Ekuk in Bristol Bay.  The Bristol Bay region, although not having as many introduced species as most other developed areas of the state, does have more than the Kuskokwim.  Metlakatla, a Tsimshian community in southeast had their natural resource director discuss the economic impacts of invasive species on Annette Island – which are quite substantial.  On a similar but different topic, a representative of the Native Village of Tyonek talked about the benefits of forming a Conservation District and how that has aided in their invasive species control efforts.

The fact that the meeting was held in Kodiak was highly appropriate because, maybe more than any other location in the state, the Kodiak region is dealing with the most introduced plants and animals that have been transplanted – either intentionally or unintentionally.  For instance, elk, bison, Sitka black-tailed deer, mountain goats, reindeer, beavers, snowshoe hares, moose, muskrats and several other mammals had been intentionally moved there since the 1920’s to improve hunting and subsistence opportunities.  Although there have been benefits with such introductions, there have been far-reaching unintended consequences.  For instance, the mountain goats often over-graze the available habitat removing vegetation and underlying soil down to bedrock; which makes for quite an unsightly scene…not to mention the ecological degradation.  Similarly, reindeer have severely depleted the lichen communities throughout the island over time.

In regards to just plants, the following photo vividly shows the extent of the many introduced ones that have encroached on the town of Kodiak…most of which have been unintentional invaders: 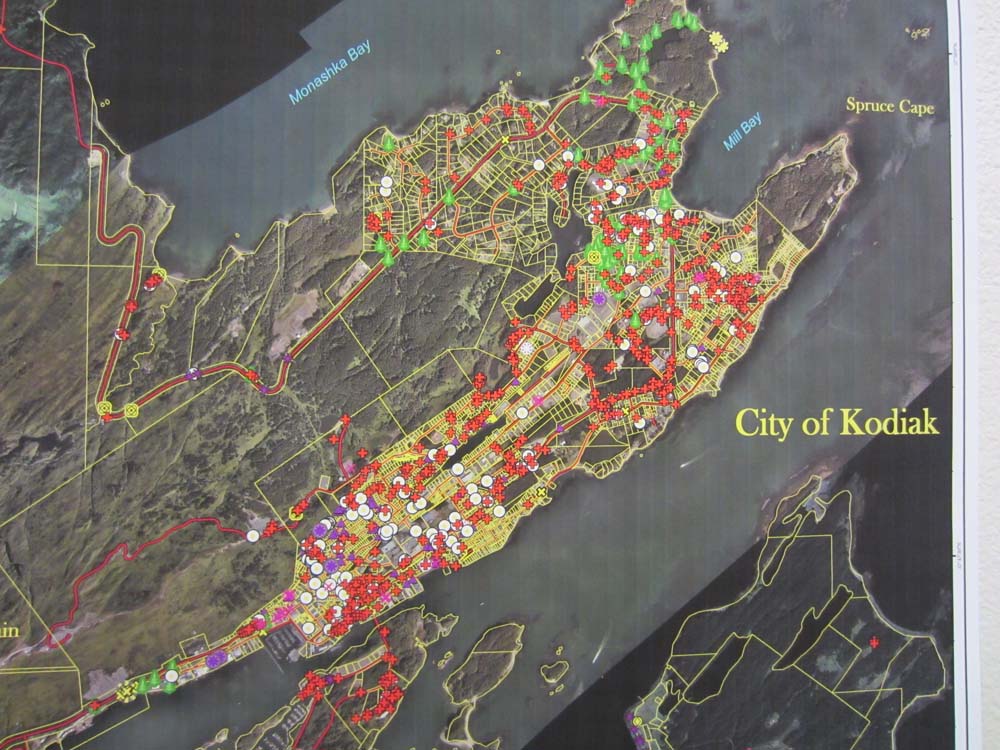 All those colored dots, red crosses and odd shapes represent an introduced plant location in Kodiak

Why so many non-native plants around the town of Kodiak?  Anytime we humans move about and want things that others have (e.g., showy ornamental gardens, hobbies like horse backing, rodeo, etc) and disturb the land, the potential for a stray seed to take hold greatly increases.  Case in point: Kodiak has long had livestock on the island; the Russians introduced some as early as 1795.  Currently there are several bison and cattle ranches scattered about and there’s even a rodeo grounds that supports activities like 4-H.  In order to support such activities, hay and straw are required – which is often brought from far away places.

Several years ago I went to Kodiak as part of a weed crew that had to spray herbicides on some of the more problematic infestations at the rodeo grounds and at the oldest cannery on the north side of the island – as well as nearby island.  That experience was an eye-opener for me.  I knew then and there that we never want to see the likes of orange hawkweed and other troublesome plants here in the Kuskokwim. Orange hawkweed is such a problem around the state that it showed up in many of the presentations and was the workshop’s opening slide. 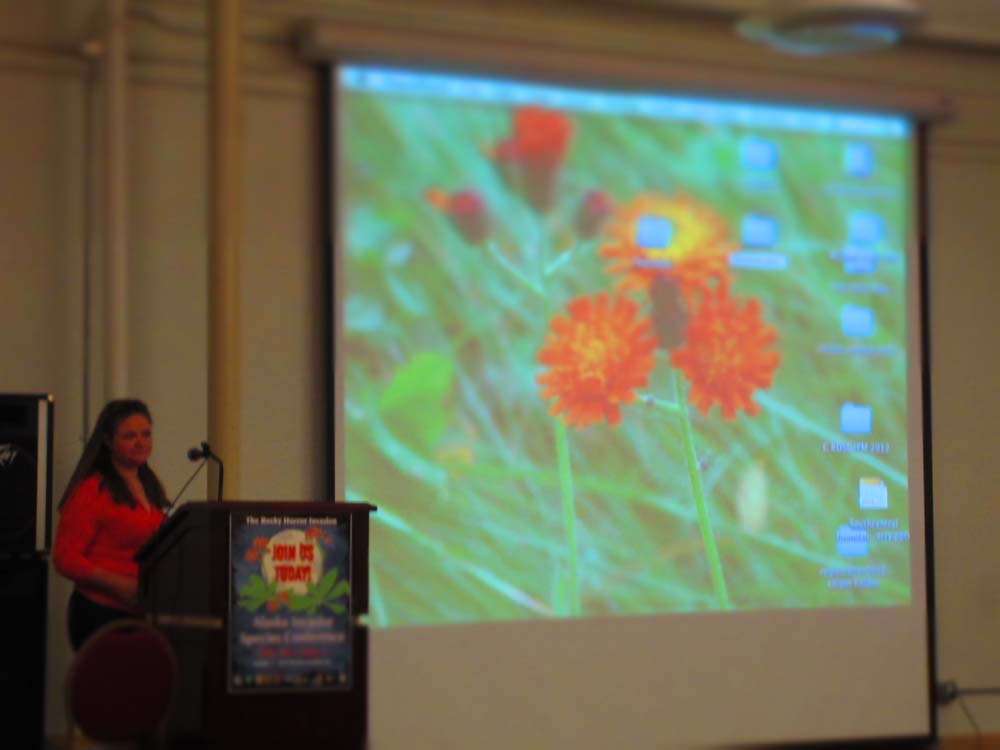 So keep your eyes out for an orange dandelion-looking plant this next summer...and all summers after that!

If that’s not enough to worry about, the state has concerns over unwanted insects entering the “last frontier”.  As strange as it sounds, firewood is often shipped to our state via ferries and other ships from Washington, while firewood is regularly transported by tourists across the border north of Tok; one carload of wood intercepted had originated in Oklahoma!  Take note next time you’re in Anchorage, there’s a high likelihood that some of the wood sold in any of the Wal-Marts and 7-11 type stores is harboring some exotic wood borer.

One alarming tidbit noted at the conference was that the aquatic invasive Elodea mentioned above has recently been found in two locations on the Kenai Peninsula – Daniels and Stormy lakes.  That fast spreading plant is known to be in several float plane lakes in the Anchorage area, lakes that most likely are visited by planes that come out to our region.

Why stray off on discussions about far away places like Kodiak and Tok?  It doesn’t take long for seeds and unwanted things to catch a ride in one way or another to our region.  That’s why I didn’t fish while in Kodiak – yet they have steelhead that enter the rivers this time of year.  Steelhead are rainbow trout that go to the ocean and return to their natal streams like salmon to spawn, but unlike salmon they don’t die after their sexual escapades; the lucky ones that survive the arduous journey are capable of spawning more than once in their lifetime.  Since steelhead are really just giant rainbows I used to love fishing for them when I lived in Idaho.  However, I didn’t want to take the chance of bringing any troublesome non-native organism back with me last week that we certainly don’t want here…like didymo or “rock snot” which is known to be in several Kodiak streams (it’s uncertain whether it’s native or not to Kodiak Island – but it has wreaked havoc in places where it was introduced).  If I didn’t clean my equipment adequately, I could have easily brought it back on my wading shoes.  Also, if I wasn’t careful, I could have transported any number of unwanted plant seeds in my shoe crevices had I gone out hiking.

So keep that in mind the next time you go visit family or friends in other parts of the state.  It seems that more and more of us are becoming worldly travelers, we certainly don’t want to be the vectors that introduce something that’s never been here before.

In talking to John Oscar at the end of the gathering he somberly realized that he had his work cut our for him and that invasive species would forever be a major focus of the Watershed Council’s efforts to protect the ecological integrity of the Kuskokwim drainage.

To show that scientists and biologists are real people and that they don’t always take life too seriously – even when it comes to a very serious topic like invasive plants – here are a few pictures from the Halloween party that was held Halloween night. 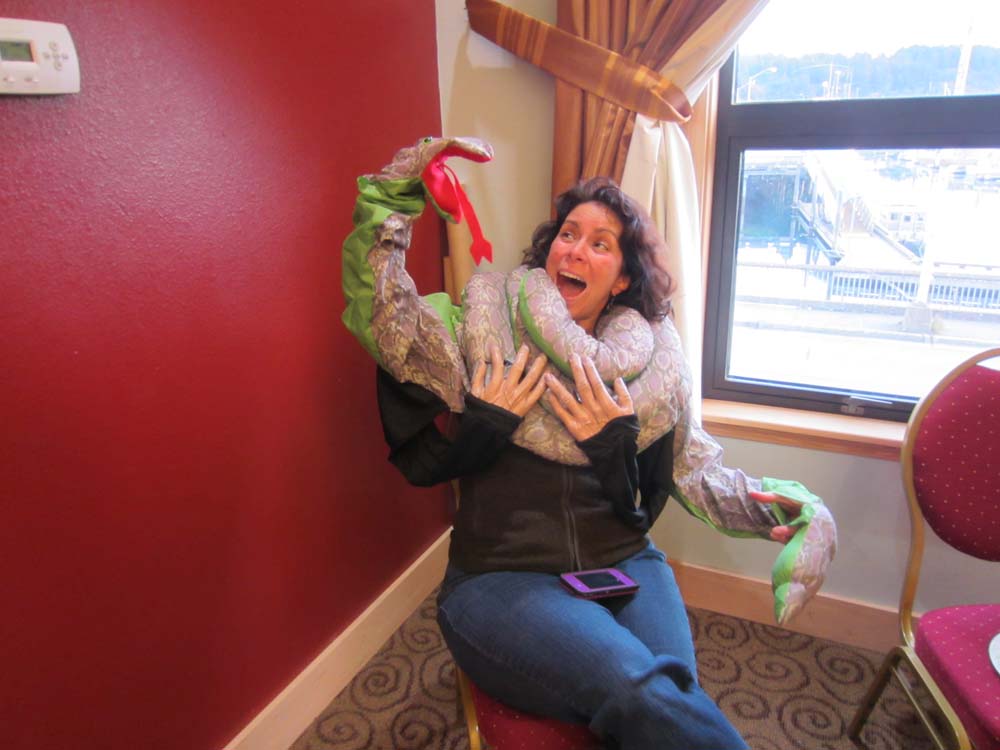 A Burmese python that attacked an unsuspecting botanist that was reaching down near the water's edge to pick up an Elodea specimen. These pythons can grow up to 17 feet long and have taken over the Florida everglades. 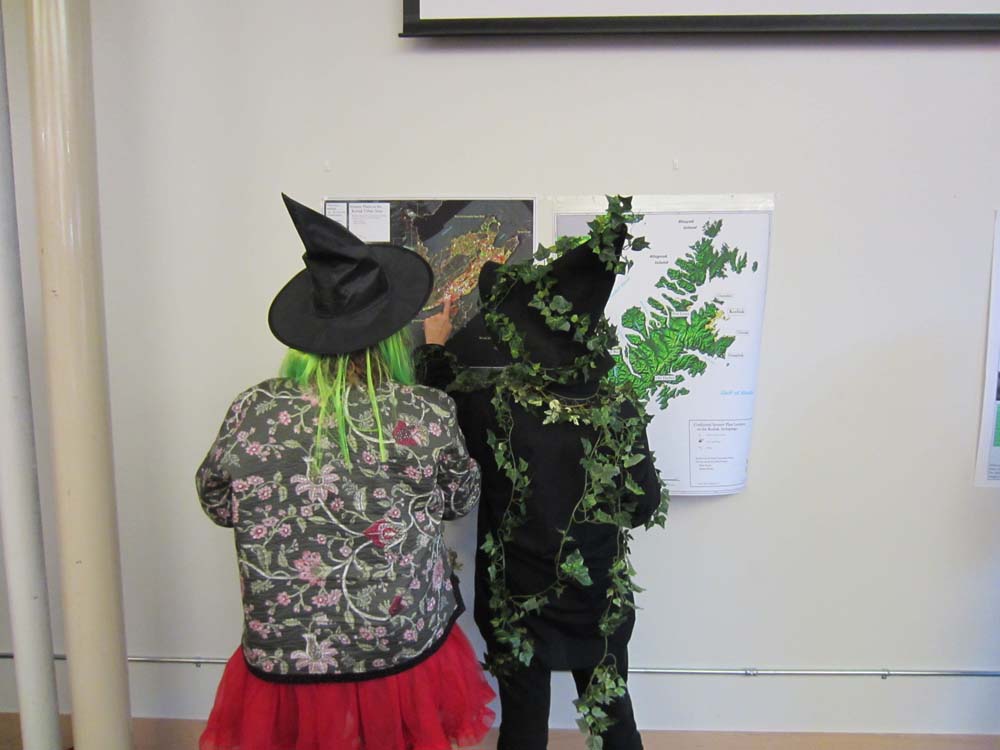 A couple of witches looking at the invasive plant map of Kodiak to find where they can get their next nasty ingredient to throw into their bubbling caldron. 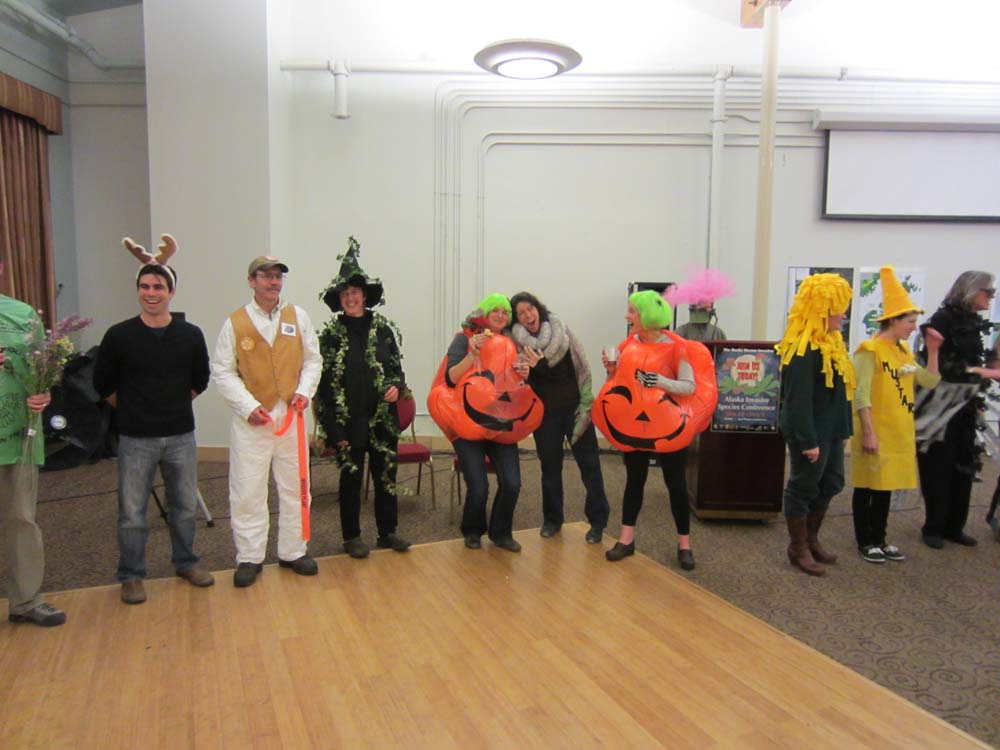 Let the parade and the fun begin!