The 2013 Alaska Forum On The Environment (Marine Debris Edition)

Last week I attended the 15th annual Alaska Forum on the Environment.  As usual there were many topics featured, everything from local landfill interests to large-scale concerns like climate change.  Some of the issues have been ongoing for many years like the rural landfill dilemmas, while some are relatively new; i.e., invasive plants…particularly aquatic invasives which if you’ve been following this website you’ve heard me proclaim is one of the up and coming pressing issues that our state and the Kuskokwim is facing.

Other environmental issues that were discussed through various sessions included the Healthy School Projects program, water quality and anti-degradation regulations, Waste to Energy for Remote & Urban Alaska, fish consumption advisories (particularly within the Kuskokwim), human toxicology and mercury concerns, Citizen Science, new guidance for the EPA GAP program, Chinook No Show that discussed the recent declines and the need for more information, among others.

In this post I’ll just cover one topic that really made me think just how fragile our planet is, and how we humans must do a better job of being good stewards if we are to pass on a healthy planet to future generations.

Marine debris was the major theme of the Forum as you can see from the photo below.  Because of its relevance to Alaska, which has over 33,000 miles of shoreline, this topic had one entire day’s worth of sessions dedicated to it as well as a keynote address. 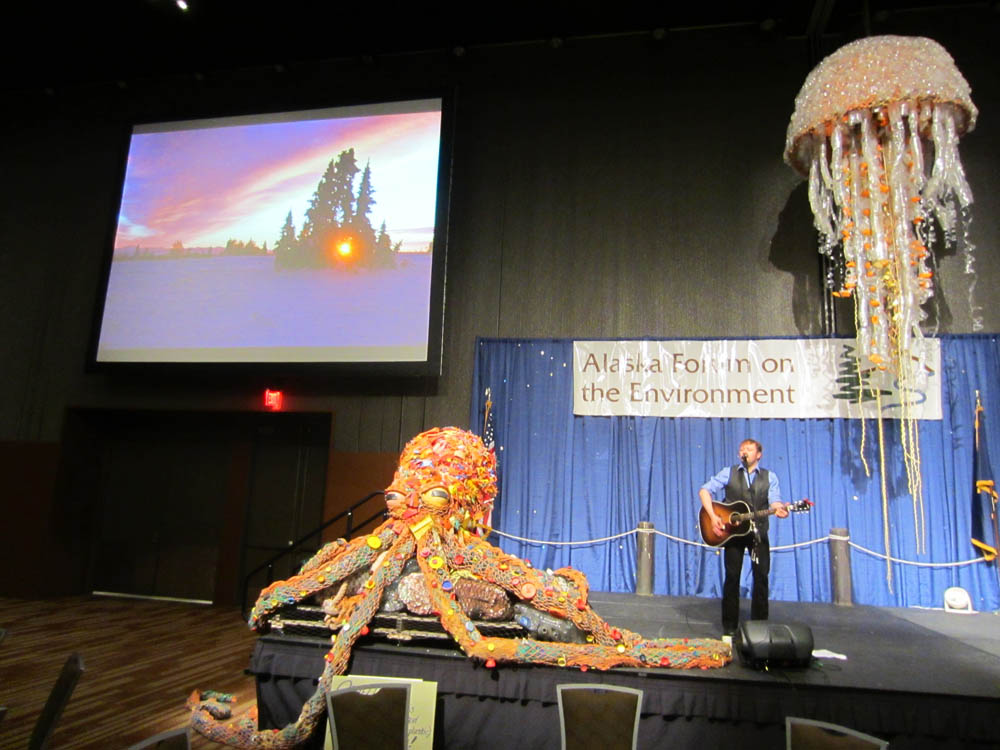 Ophelia – the octopus – was made entirely of marine debris collected by high school students along the shores of Kodiak Island.  She’s made up of a plethora of non-biodegradable debris such as rubber, plastics and an assortment of fishing net materials.  The 12-foot tall jellyfish hanging from the ceiling is made up mostly of plastics (e.g., water bottles) collected by the Center for Alaskan Coastal Studies.

What is marine debris?  Well, basically it’s any solid persistent manmade material that is abandoned and makes it way to the oceans.  Maybe you’ve heard of the Great Pacific Garbage Patch?  Yes, there is a lot of stuff floating within the center of a large circular ocean current or gyre in the Pacific Ocean.  Most people incorrectly visualize all kinds of bobbing plastic jugs, toys, balls, rubber ducky’s, buoys, and other brightly colored objects several feet thick out there; however, it’s mostly comprised of dime sized and smaller pieces – none-the-less, it’s a growing problem.

So it’s not hard to imagine that marine debris isn’t only a localized problem.  Sadly, there isn’t a beach on planet earth that is devoid of some form of debris that has washed ashore.

To demonstrate just how much of a concern it is in the United States, this past year Congress reauthorized the Marine Debris Research & Reduction Act that expired in 2011; if you’ve been paying attention, relatively few other bills were addressed.  But it took an event of epic proportions to get Congress to act; the driver behind the reauthorization was the mountain of debris (about 5 million tons – 70% of which sank immediately) swept out to sea by the Fukushima tsunami that has been, and still is, heading our way in a steady stream.  Since that natural disaster, Alaska’s shoreline has experienced a 1,000% increase in washed ashore polystyrene materials alone.

One might think that most of that stuff originates in the ocean with the sources being the many ocean going vessels.  And yes, a fairly large component of marine debris is buoys, Styrofoam, fishing line and fishing nets.  Sadly, in recent years in the vicinity of Juneau at least 400 sea lions were documented being entangled in some sort of derelict fishing gear or fishing related paraphernalia.    http://www.adfg.alaska.gov/index.cfm?adfg=wildlifenews.view_article&articles_id=382

Surprisingly, the bulk of marine debris actually comes from the land.  According to the EPA, 80 % of debris found on the beaches is generated there – mostly from piers, harbors and inland river sources.  Hmm, river sources.  Do any of us here in the Kuskokwim contribute to any of that debris that washes up on Nunivak Island or along Kuskokwim Bay?  Is it possible for the lid to a Gatorade bottle or plastic oil jug casually discarded out of a boat near McGrath or on the ice hundreds of miles from salt water to end up in some sea bird’s stomach?  Absolutely! 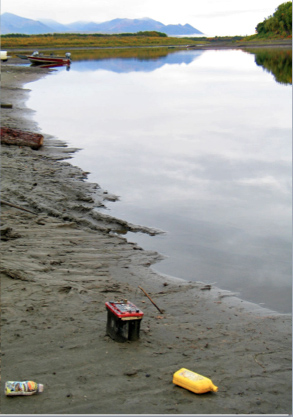 The Kuskokwim shoreline a hundred miles or more from Kuskokwim Bay (where are the lids from the bottle and jug?)

Guess what the most common debris item collected during the International Coastal Cleanup of 2012 was?  By far, it was CIGARETTES!  The second most common was caps and lids from plastic bottles. 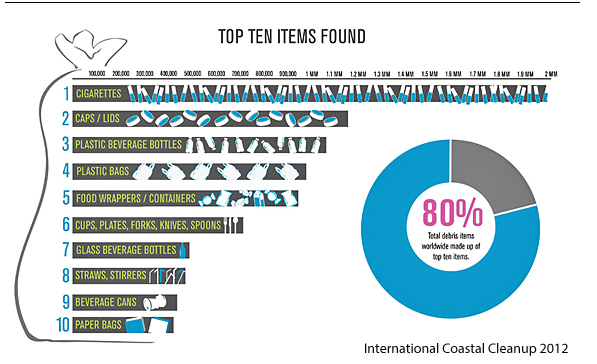 Here’s proof that such debris causes harm to wildlife.  This photo shows the extent of the indigestible contents found in the stomach of a young albatross that died on a remote island…way far away from a large population center.  As you can see, its stomach was literally packed full of plastic items, everything from shotgun shells, cigarette lighters, tampon applicators, bottle caps, etc.; the bird mistakenly mistook this litter for food items and died from lack of nourishment. 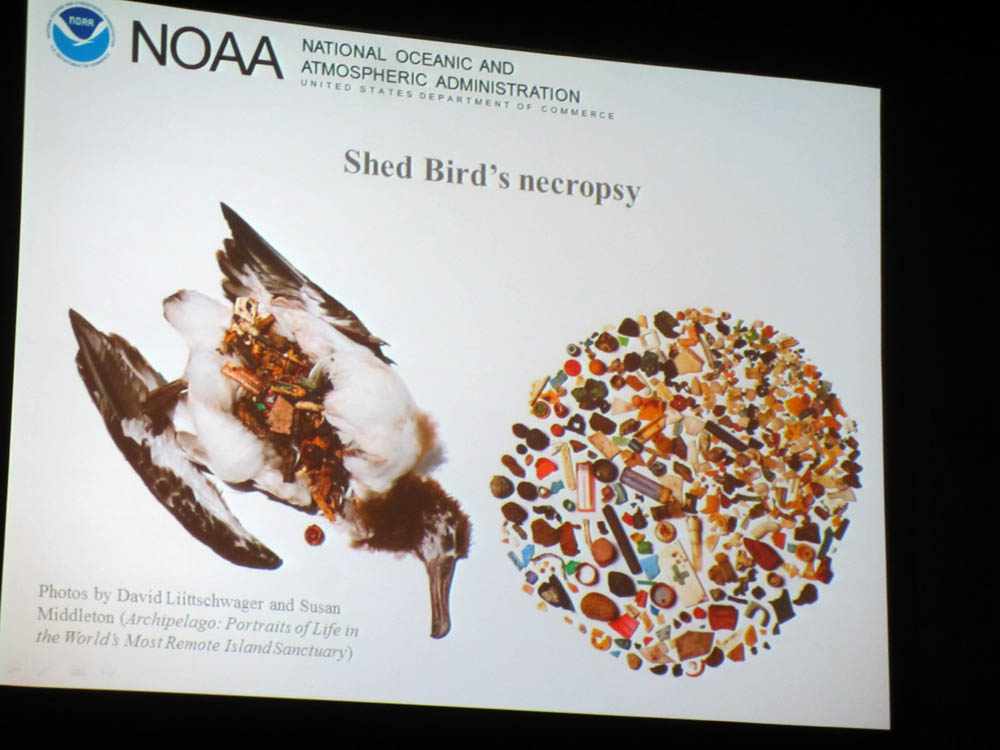 And here’s a heart wrenching video showing more of the same!!

If that’s not cause for concern, plastics are being found in salmon and some think that that might be contributing to the decline of the Chinook.  Recent studies looking at stomach contents of Chinook salmon far out at sea show plastics, although a relatively small amount, that they’ve somewhere ingested.  Kate Myers, a retired fish biologist with the School of Aquatics & Fishery Sciences – University of Washington, presented data at last year’s ASVCP Salmon Summit that showed small amounts of plastic in fish caught in the Bering Sea during their winter work; not surprisingly, the 4 & 5 year olds had more than the 1 & 2 year olds. 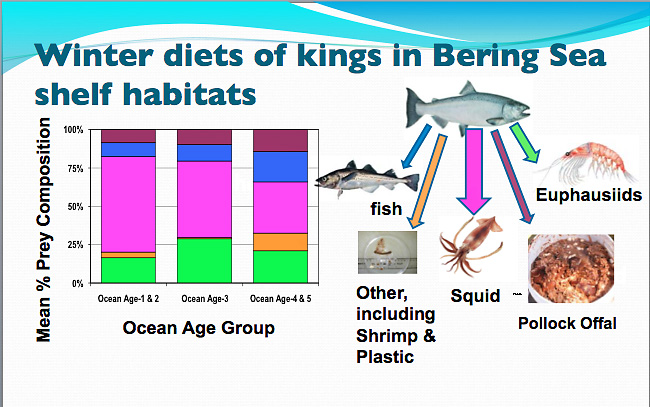 Note the yellow band in the bars that denotes plastic and other substances. Of interest too is the pollock remnants which are cast overboard from the fish processor vessels. Hence, there seems to be no place that the human presence does not abound!

But it’s not as much the plastics as it is a chemical that makes plastics pliable – phthalate.  Phthalates don’t bind well with the plastic and are easily released into the environment.  This chemical has been shown to be an endocrine disruptor that can produce adverse developmental, reproductive, neurological, and immune effects in humans and wildlife.

One researcher with the University of Alaska, John Kennish, presented data at the Forum on work conducted at a small lake on Elizabeth Island off the western tip of the Kenai Peninsula, where waves from the Gulf of Alaska pound its shore and push ocean debris more than a mile inland into the lake.  Occasionally, a rainbow-colored sheen can be seen on the lake from the mass of very small plastic particles not much different than what is found in the Great Pacific Garbage Patch.  Here, just off the Kenai Peninsula, coho juveniles had phthalate levels four to five times higher than juveniles not subjected to the high concentrations of plastic debris. 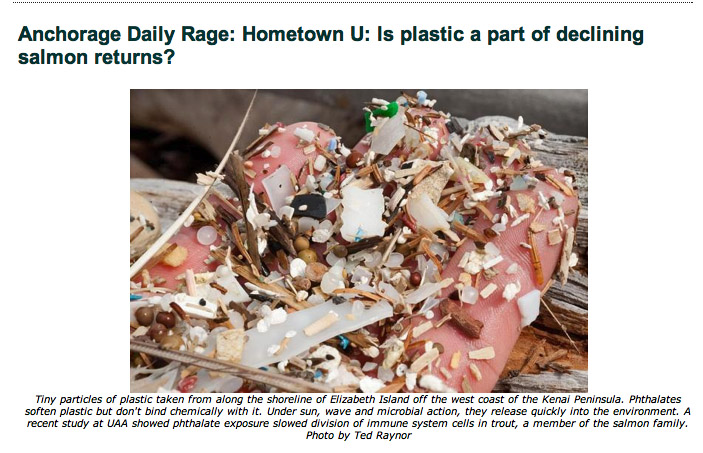 So even though we’re hundreds of miles from the ocean, we must remember that all things are connected and that our actions can have consequences far away.  Maybe this planet of ours isn’t as large as we think!