The Alaska Department of Fish & Game has released a preliminary season summary of the 2013 season in a News Release dated October 9.

Here are a few salient excerpts from the summary:

Chinook salmon escapements at tributary weirs were the lowest on record at all projects. Escapements at George and Kogrukluk Rivers were below the respective SEGs (Sustainable Escapement Goals). 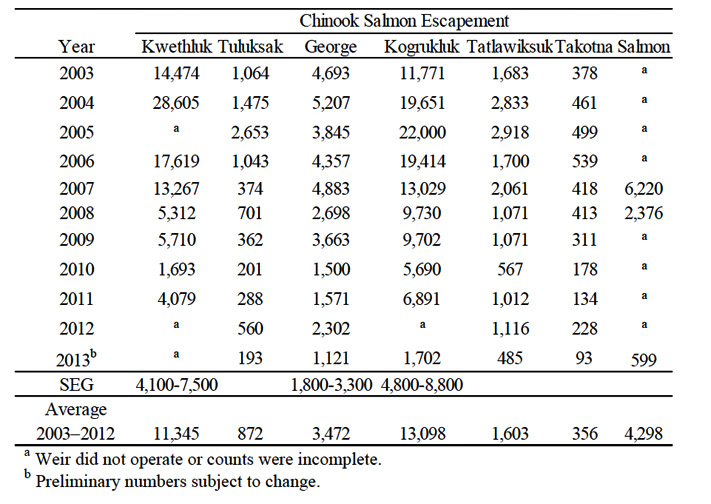 Table 5. Chinook salmon spawning weir escapement, Kuskokwim River drainage, Kuskokwim Management Area 2003-2013.  The Kwethluk, George and Kogrukluk weirs are the only projects that have established goals (SEGs), but note the comparison of the past four years numbers with the 10-year averages.

To show that we are not just seeing low numbers of Chinook in the Kuskokwim, here is a table from the 2013 Kuskokwim Summary showing the escapement for this summer’s run on the Kanektok River in Kuskokwim Bay. 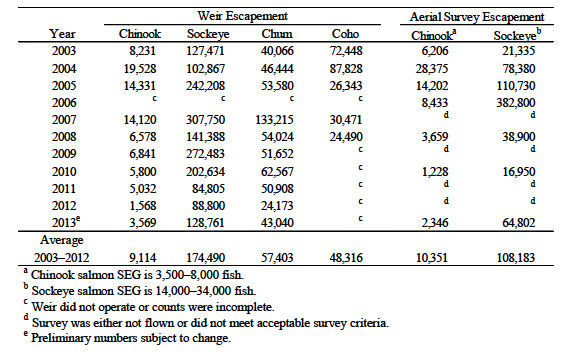 Kanektok River weir escapements from 2003 – 2013. Note the low returns the past four years compared to the 10-year average.

Based on the BTF (Bethel Test Fishery) the Chinook salmon run started about one week later then [sic] average, however the run was compressed and ended almost two weeks earlier than average.  The majority of the run passed Bethel from June 16 through June 27 and resulted in overall average run timing. 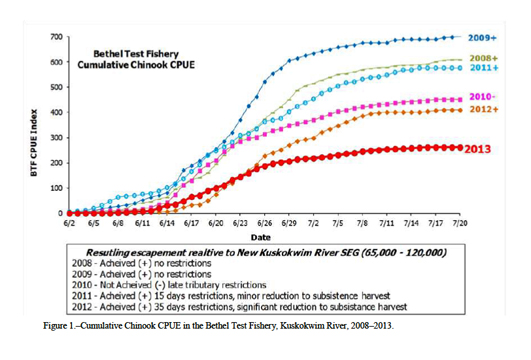 Bethel Test Fish Cumulative Catch Per Unit Effort (CPUE).  Note that it is the lowest on record; the preliminary indication is that the drainage-wide escapement goal will not be met.

The Kuskokwim Area has experienced low Chinook salmon runs during the past four years and run sizes the past two years were among the lowest on record. In 2012 and 2013, the majority of escapement goals were not consistently achieved. As a result the department will be working with the public to implement a more conservative management strategy for Chinook salmon in 2014. In general, management will be restrictive at the onset of the season with the potential to relax restrictions based on inseason information if warranted.

Management options and specific actions to be taken will be discussed with federal managers, the Working Group, and public stakeholders through the winter with the expectation for finalized management strategies prior to the season. Management options under consideration in the Kuskokwim River include significant reductions in subsistence fishing time, gillnet mesh size and fish wheel restrictions, and delaying the onset of commercial fishing in District 1 to avoid incidental harvest of Chinook salmon.

As noted in that last paragraph, there will be ongoing discussions with the stakeholders throughout the winter with hopes of addressing many of the issues presented in our previous posts – namely the need to meet escapement goals but also providing equitable fishing opportunity for the upriver fishers who tend to continually get the short or dirty end of the stick during years of low returns.

The actual News Release can be found at http://www.adfg.alaska.gov/static/applications/dcfnewsrelease/370446131.pdf